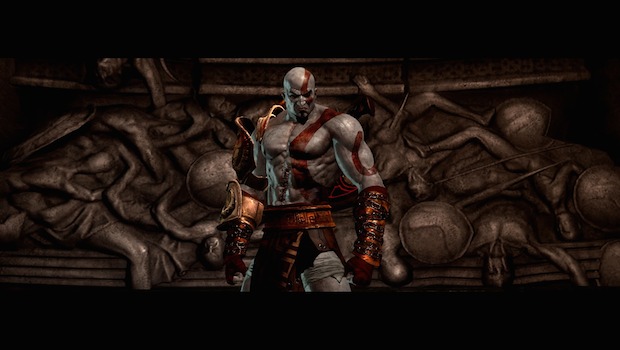 Remasters are commonplace now, and in the summer drought of game releases, they’re often a nice way of retreading old ground or covering blanks in your backlog. They’re are also a great opportunity to modernize, re-imagine and spruce up an older piece; some of the best remasters I’ve played make a game I’ve played many times before feel fresh when I boot it up.

God of War III Remastered doesn’t really do much of that. For all intents and purposes, this is the same title that came out five years ago.

The many vistas look fantastic in 1080p.

The staples are still the same: you’re Kratos, god of tantrums and sneers, going on a bloody rampage against any and all deities, heroes and living organisms in the same hemisphere as you. It’s curious that God of War III was the game chosen for a remaster, as the original PS3 version is only five years old and mostly glosses over the context of the previous games. Newcomers will likely have to wiki-search summaries of the previous God of War games, as the intro cutscene sets the stage in a very ambiguous, cryptic manner.

Kratos has also become increasingly insufferable in the five years since I last played as him. Most of his gruff dialogue and brutality comes off as edginess, and the power fantasy isn’t quite the same the second time around. I found myself wincing, not at the violence, but that its only place was as a means to make the game seem darker and more adult. Kratos was never a nuanced or particularly interesting protagonist, but when he said, “This is MY war, not yours!”, I couldn’t help but think of a child laying claim to a toy, rather than the Ghost of Sparta.

Kratos and his blades look great, and the up-res makes combat even more fast and fluid.

The infamous opening scene of Kratos riding the titans up the side of Olympus is grand as ever, and the opening sequence does a great job of showing off the technical improvements made for the remaster. Combat runs at a fairly consistent 1080p, 60 frames-per-second, and the lighting system has been overhauled, making scenes more colorful and dynamic – well, as dynamic as the greys and blacks can get, at least.

Many textures still look dated, though, and (literally) shining a new light on them doesn’t do much to make them stick out less against the better textures used on Kratos and his blades. Those only become noticeable during climbing sections when you’re pressed against walls and rocky outcroppings. Cutscenes are also the same ones from the PS3 version, so you’ll have occasional jumps from high-res, high framerate to the lower orignal quality, but overall, God of War III Remastered looks great. It’s the art direction that becomes off-putting when ported to higher fidelity.

Cutscenes aren’t always as clean as the main game, creating a strange contrast.

The style of the game is retained very faithfully, and remains a stark reminder of how grey and dour everything was in the God of War series. Enemies are monsters and ghoulies with a tinge of Greek, arenas have spikes and dark splatters of blood everywhere, corpses litter the area… barbarism is the goal, and it still comes across strong as it did in 2010.

Combat is the same beast of mixing up light, heavy, grapple and magic attacks. Enemies are the same, arenas the same, bosses the same. Stop me if I’m going on, but there really isn’t much added gameplay-wise to change things up. Executions are still as brutal and necessary as ever, and while it can be exciting at first to do them, a lot of the short QTEs become tedium that break up the fast combat rather than rewards for good gameplay.

There’s still plenty of executions, and many of them are necessary to survive in combat.

It’s interesting to go back and revisit a lot of the different levels as well, and for the most part, they hold up fairly well. Puzzles are interesting without being frustrating, and serve to break up the constant onslaught of enemies and artificial arenas. The locales are pretty amazing too, and while the color palette isn’t always lively, it’s fun to retread old ground and explore for collectibles.

Boss fights are as fantastic as they were five years ago.

In my time with God of War III Remastered, I just couldn’t shake the feeling that I had not only done it all before, but that maybe it was better I didn’t do it all again. When I reflected on God of War III prior to this edition, I mostly remembered how cool the Blades were and how grand the boss fights were. Those elements are all still there, but the long bouts in between have become all the more tedious and repetitive with time.

If you’ve been craving to re-experience God of War III and are without a copy or a PS3, then this fits that need perfectly. Series newcomers will likely find this a disjointed, jarring experience, but still somewhat engaging. While the game hasn’t aged quite as well, there’s still some great set pieces and cathartic brutality to be had. If anything, I’m left wishing the first two God of Wars were included. As it stands, this is a slim offering, and one that will likely leave most wanting.

God of War III Remastered delivers exactly what it says: a prettier version of the same game you played five years ago. Those looking for the same experience will find it, and those looking for something new or a fresh take on the series won’t get much out of this remaster.