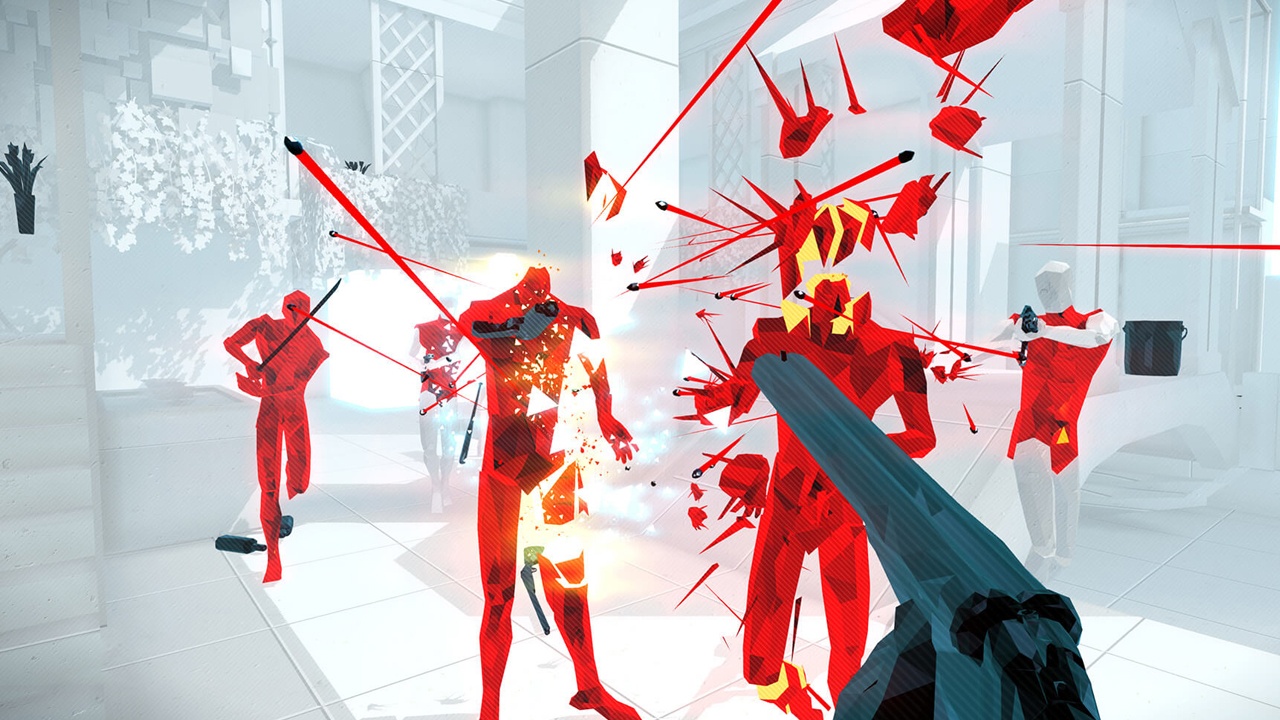 SUPER. HOT. SUPER. HOT. Just hearing that makes me feel like a badass. The only thing that’d make me feel more badass would be more SUPERHOT. If you are unfamiliar with the concept, basically when you move, your enemies move. When you stop, they stop — even slowing their bullets to a crawl. It’s a unique mechanic that lent itself to amazing moments where you could cut a bullet on half, throw the sword to impale a nearby enemy, fling an ashtray into the next guy’s head, and cap it off with ducking underneath a bat being swung at you and blasting that dude in the junk. The SUPERHOT team have hopped back into their universe to try a few new tricks. Is it SUPERHOT or SUPERNOT?

From the moment you step back into the world of SUPERHOT, you’ll immediately notice a few changes to the formula. The team has dropped a dash of roguelike elements into the gameplay, granting the player health, but also the chance to hack their own mind. Using a basic map, you’ll plumb the lowest reaches of your skull, unlocking new powers such as extra health, spawning every level with a katana or random gun, making objects you throw explode, and much more. Why don’t we see it in motion?

There are two criticisms with SUPERHOT: MIND CONTROL DELETE, and frankly one of them is unfair and the other is very valid. The unfair criticism is that I’ve played SUPERHOT VR, and there’s just no going back. Once you can move around freely in the space, cutting down your enemies, Matrix-bending around bullets, and killing people with a discarded shoe, there’s simply no going back. That’s not the fault of this game, just that SUPERHOT VR is the pinnacle of the formula (my review). The fair criticism, on the other hand, is that this game lacks some of the puzzle flair of the original. Each level in SUPERHOT was scripted, throwing an insurmountable amount of enemies at you from all angles. You were outgunned, outnumbered, and forced to dissect the scene one kill at a time. Here, your placement within the level is random, but the enemies are no longer scripted, and you don’t have to kill them all. They come at you from whatever open door occurs in the level, trying to gain an angle on you however they can. The AI is capable of tearing you up if you don’t pay attention, but it does mean that the roguelike elements bring the fun, not the level design.

It’s an odd formula to drop randomization into a game like SUPERHOT, but it does work somehow. Gone is the linearity of the first game, replaced by a mysterious map. Each square represents a series of challenging environments filled with similar gameplay elements to the original, but heavily modified by your “hack pool”. The hack pool are mods you can inject into your mind to change the way the game plays. Starting each sequence you’ll select from a short list of “core” elements (e.g. more health or the ability to leap forward and punch somebody in the face every so often), and then augment them when you hit specific points in that sequence. You can see just a handful of these in the screenshot below. 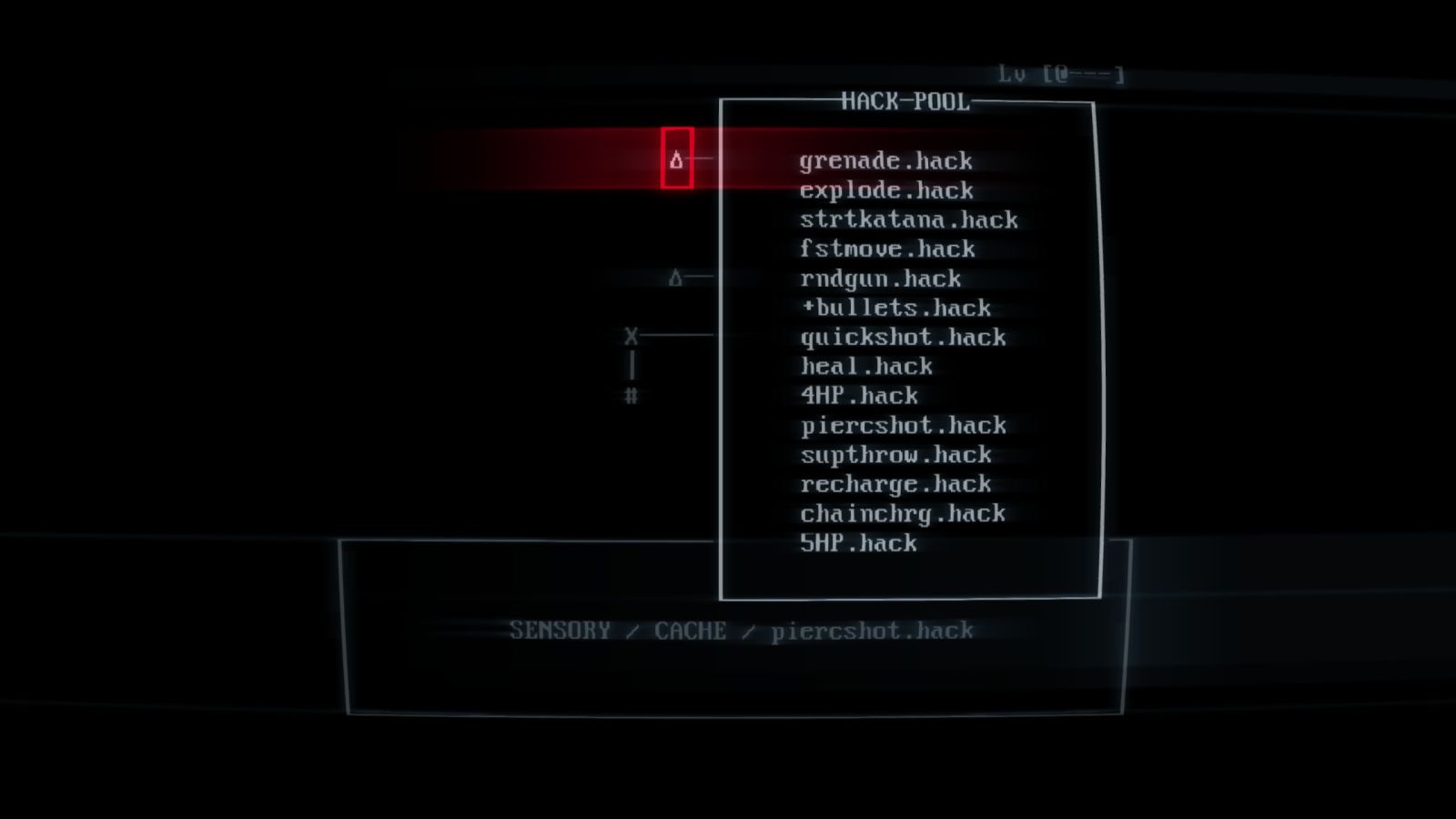 This extensive list is just a small slice of the possible hacks.

Each time you find a triangle on the map, you’ll unlock a new hack. Each one is useful in its own way, and you’ll choose between two every few segments in the level, only to see them reset between segments. It pushes you to get good with all of them, but you’ll settle on some favorites pretty quickly. You’ll keep adding them to your cortical stack until you die, sending you back to the beginning of the sequence, or you complete the entire area. I’m a fan of starting with a katana, superthrow, and fastmove — those three make me an unstoppable killing machine.

Like its predecessor, the storyline uncoils itself over the course of about 9 hours, though you can certainly push more with the randomization elements and side content. Three new “friends” will join the usual red guy army — I don’t want to ruin it, but they will make sure you aren’t standing around waiting, applying some very direct and angry pressure. For as much as this preserves the original formula, it also pushes the envelope on the concept. 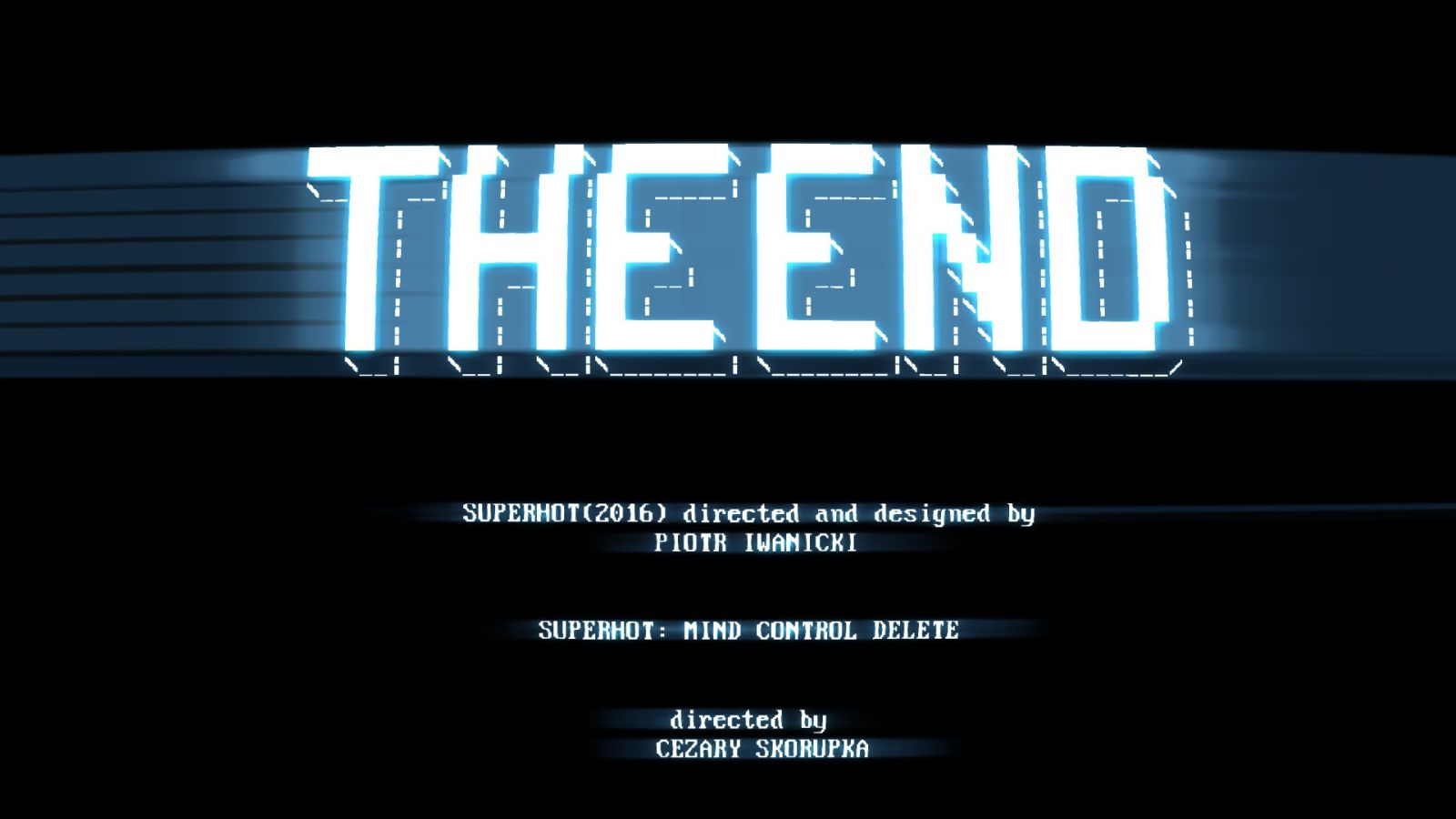 Just a hint…this isn’t the end. Not by a long shot.

Like the previous installments, the longer you play, the stranger it gets. I’m not going to ruin the trippy story, but suffice it to say that you’ll find the levels begin to distort, and it only gets weirder from there, capped with an ending that I both applaud and am baffed by its audacity. Obstacles pop up out of nowhere, and hallways turn into trippy distance-stretching funhouse mirrors. Throw in that bad guys may grow spikes on them, exploding like a polygonal claymore to kill everyone in the environment, bad guys who have grafted their weapons onto them so you can’t snatch them, or foes with only a tiny weak point to strike, and you’ll have to change up your tactics to survive.

Speaking of changing tactics, your foes have a few aces up their red polygonal sleeves as well. Enemies have upgraded their SUPERHOT skills, and are now able to occasionally block incoming projectiles, cutting down bullets in midair just like you do. It’s not a huge threat, but it will keep you on your toes. 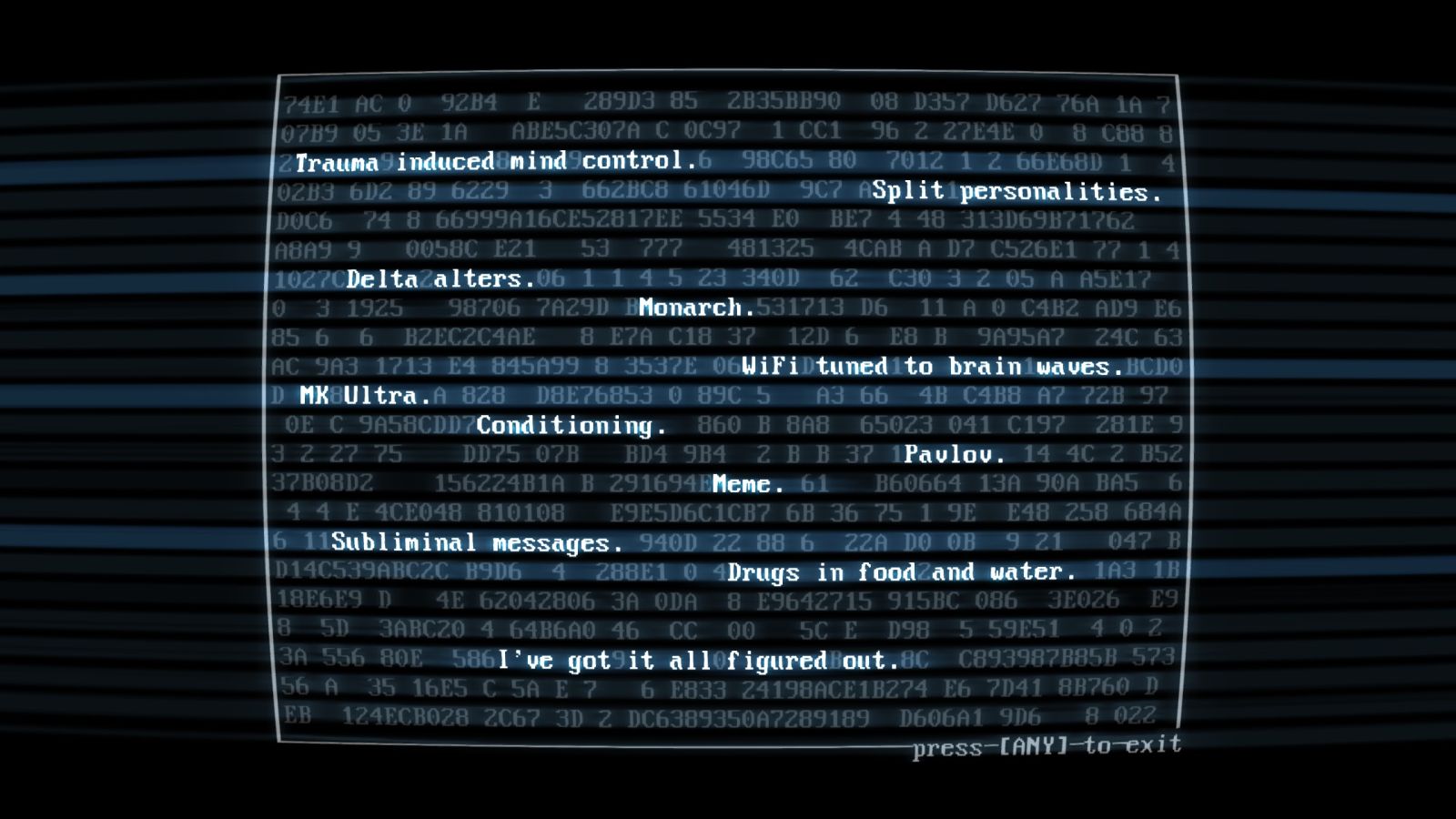 One of my favorite things about MIND CONTROL DELETE is the fresh assortment of implements to take down your foes. Pulling a dart from a dartboard and then flinging it across the room into the skull of a shotgun wielding foe feels like some serious ninja nonsense. Doing it with the hack that causes explosions when enemies are killed with headshots and you’ve got a recipe for chaos. Add in a katana that you can throw and periodically recall back to your hand and you start feeling that patented SUPERHOT badass level we loved in the other games. I’ve killed a whole lot of people with a pencil, and it’s everything John Wick made it out to be.

There are two major knocks on SUPERHOT: MIND CONTROL DELETE, and the first one has bitten me twice. I was near the end of the game and fired it up on my new laptop only to find that my entire save had been reduced to ash, starting me over at the very beginning. Well, in the process of writing this review I popped back onto my desktop only to see myself at the very beginning once again. This links directly to the second complaint I have with the game — it can be somewhat repetitive. Sure, the world slowly changes, and you’ll have fresh weapons and tactics to unleash, but I found myself settling into a core and hacks I liked, and then retreading the same two dozen levels or so over and over from different angles until I finally beat the game. In all, you’ll spend somewhere between 8-10 hours in this standalone expansion for the game, with all of the side content pushing that number towards the 25 hour+ range.

This standalone expansion to SUPERHOT is a welcome addition to the formula. What it lacks in bespoke puzzle elements, it makes up for in a completely fresh and vastly expanded approach to the central concept.

Ron Burke is the Editor in Chief for Gaming Trend. Currently living in Fort Worth, Texas, Ron is an old-school gamer who enjoys CRPGs, action/adventure, platformers, music games, and has recently gotten into tabletop gaming. Ron is also a fourth degree black belt, with a Master's rank in Matsumura Seito Shōrin-ryū, Moo Duk Kwan Tang Soo Do, Universal Tang Soo Do Alliance, and International Tang Soo Do Federation. He also holds ranks in several other styles in his search to be a well-rounded fighter. Ron has been married to Gaming Trend Editor, Laura Burke, for 21 years. They have three dogs - Pazuzu (Irish Terrier), Atë, and Calliope (both Australian Kelpie/Pit Bull mixes).
Related Articles: SUPERHOT: MIND CONTROL DELETE
Share
Tweet
Share
Submit