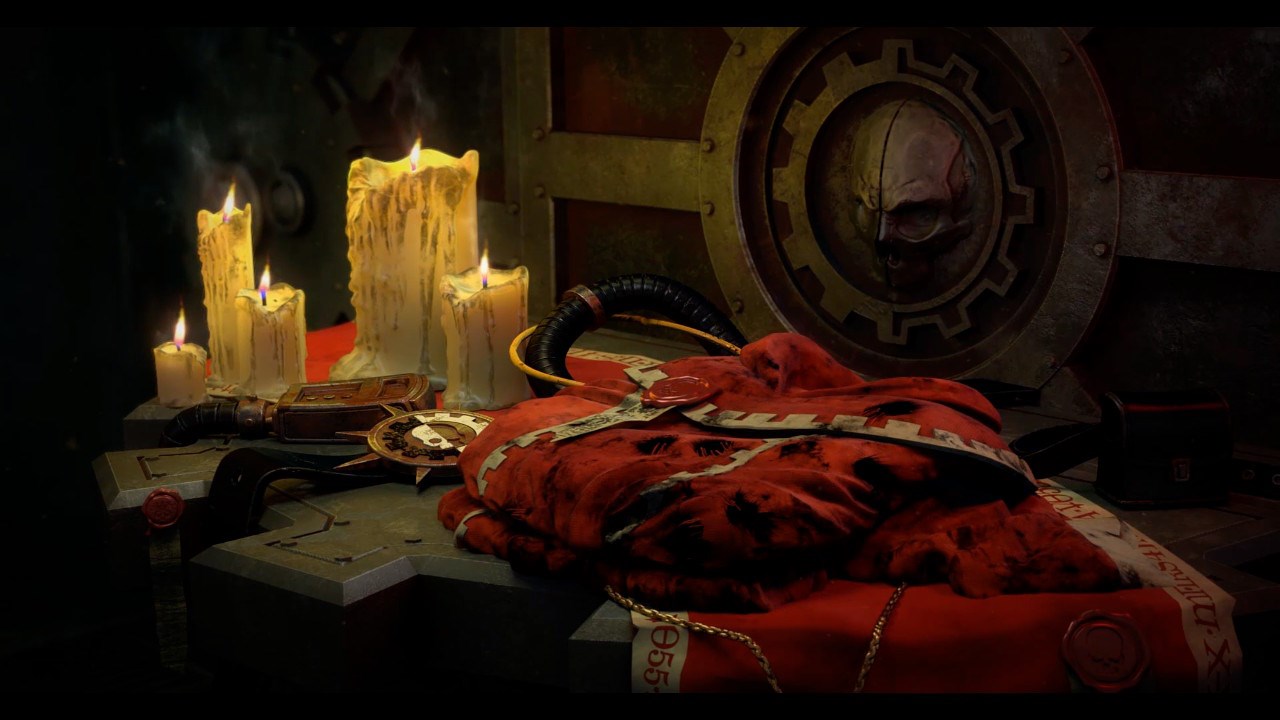 Warhammer 40k Mechanicus contains a bevy of interesting narrative and mechanical decisions, but this tactics game is also marred by questionable implementations of those decisions.

Warhammer 40k has been expanding itself into new genres of late, and Mechanicus takes the franchise into the realm of tactics strategy with…mixed success. For those not in the know, Warhammer 40k takes place millenia into the future, with a dystopian human civilization beset on all sides by enemies and wary of Chaos infection from within. The tech priests of Mars, the titular Adeptus Mechanicus, take holy significance in transitioning parts of their bodies and mind into the perfection of machinery. These tech priests must delve into a tomb constructed by the Necrons, beings that use robotic bodies as vessels for their souls, to find tools and information in humanities war against alien threats.

Mechanicus, as I will refer to it for brevity, is filled to the brim with great ideas but stymied by questionable implementation. It’s clear that the team loves their material, both mechanically and narratively, and with more resources would have delivered an unequivocally excellent experience. The actual result is mixed, rewarding fans of the franchise while testing their patience.

The game is largely broken into two pieces: exploration and combat. Your tech priests arrive in a ship, which functions as a mission select and location to upgrade or customize your units. The missions take place on a tactical overlay, featuring locations that contain meaningful, intelligent choices. You see, the entire game you are surrounded by dormant foes. The more noise you make, the more enemies awaken to fight you. Thus you have to balance gaining more resources and information with minimizing the level of threat. In a mission, this results in additional difficulty, but it also contributes to an aggregate awakening level that rises between missions, resulting in harsh consequences once the tomb finally rouses. When coming across Necron ruins you may choose to purge them, ignore them, or take time to examine, each resulting in possible rewards or penalties. The many choices like this are never truly repetitive, because their results add together throughout the course of the game. 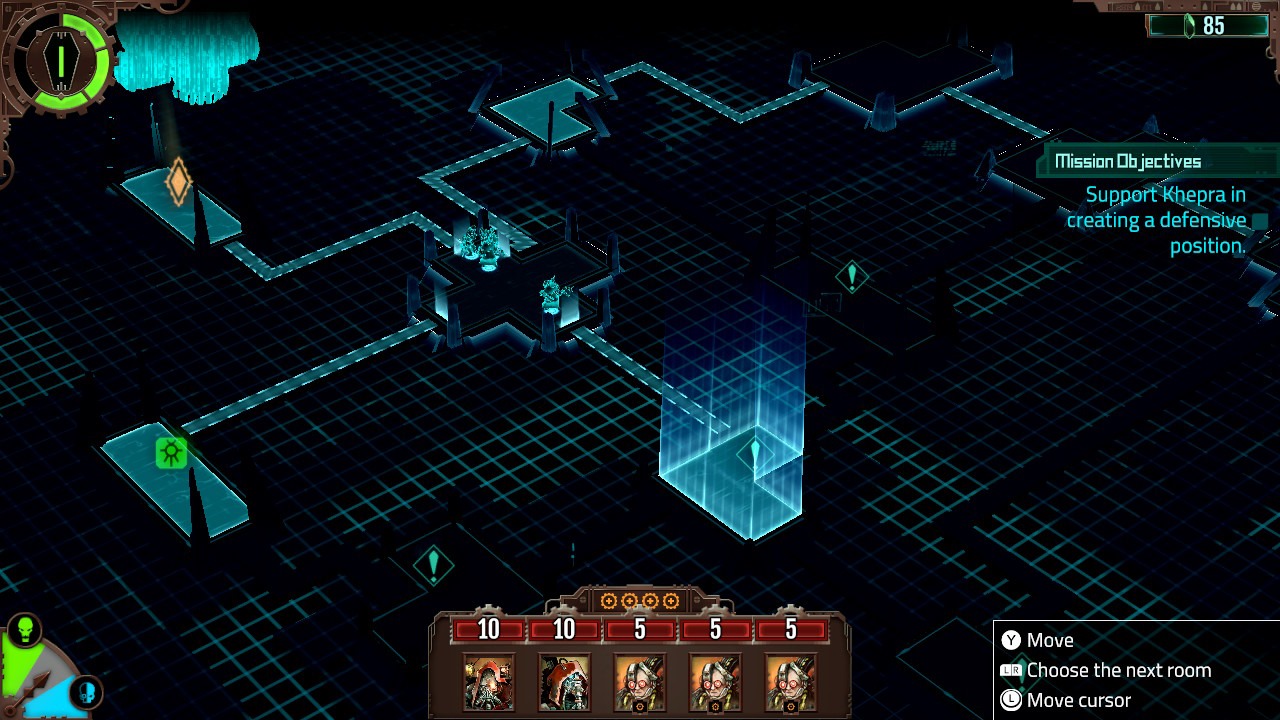 Meanwhile, you do want to take certain risks, as money is a rare but crucially important resource. Blackstone, the mysterious substance that you harvest from the tomb, is necessary to upgrade your units and purchase better infantry. You need as much as you can get your cybernetic hands on, but have to weigh the costs associated with gathering it.

As the game progresses, upgrades to your tech priests come in terms of new passive and active abilities, split into several class lists. Unfortunately, because they increase in power the longer you go down a single tree, it’s not really practical to multiclass into multiple trees. You also unlock new weaponry and equipment through missions, and while not all are created equal, you will still find plenty of engaging build choices as you mix and match your classes and equipment.

You also gain access to canticles: powerful abilities that trigger once per battle, only three of which you can choose for each mission. You obtain more canticles by achieving in game goals, such as healing a threshold of damage or destroying certain enemy types. The game’s various upgrades are important, and make a huge difference in terms of your combat utility. The first few hours of the game will see you consistently on your back foot, outclassed by everything you meet. It’s a tiresome slog through combats with no meaningful decisions until you get enough upgrades to give yourself a fighting chance. I wish this portion of the game were accelerated, because it’s only once you get more abilities and the enemies become more varied that the game’s strengths start to shine through. The combat encounters don’t contain decision-making, as you have so little to choose from until you obtain more abilities.

Combat in Mechanicus contains many unique features, differentiating itself from your typical XCOM clone. There is no cover mechanic, beyond objects which break lines of sight. Attacks are guaranteed to hit (barring special ability), so the damage resistance granted to units by armor is extremely important. The main focus is in gaining and spending Cognition Points, energy shared throughout your team that fuels abilities and equipment. Your flying servitor skulls can gain CP at range from certain pylons, and you gain one every round when standing next to said pylons. You can drop in allied troops during the round, which are weaker than your adeptus but more useful because you can drop them in at full health later in the combat. You can use this to create a huge advantage for yourself, as units take attacks of opportunity when they move out of melee range of enemies. If you were to suddenly drop a few infantry on a ranged enemy, you could put out some meat shields while opening that enemy up to a few hits before they can make their attack. 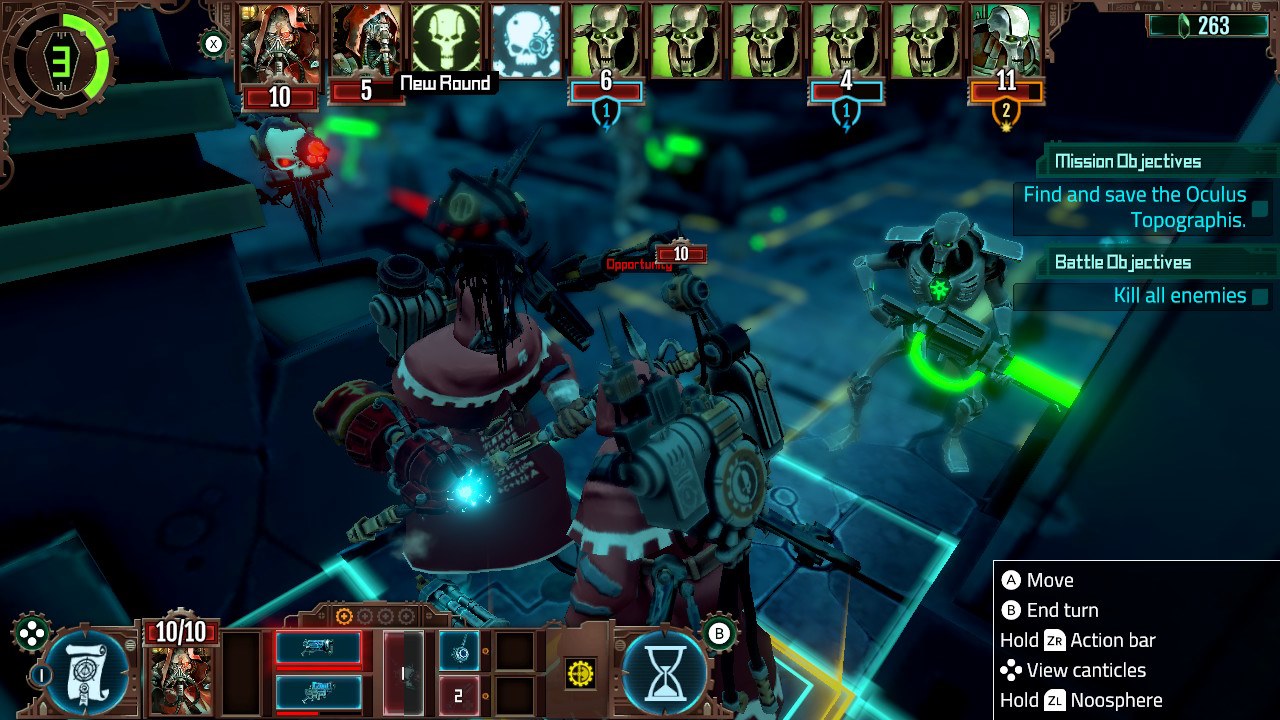 If this seems busy at all, be not afraid; the game is very good at communicating what is going on, and this zoomed in view grants you additional details not granted by the standard overhead view

You must also be careful because downed enemies regenerate if you do not deal an extra blow after they die, or kill all of them before any regenerate. Weapons also gain machine spirit charges as you use them, which allow for a guaranteed critical hits which may contain extra benefits.

The Switch release also contains the Heretik expansion, which is a nice addition as you get to a point where lack of enemy variety becomes tiresome. Heretik brings new content along with it, including disciplines, enemies, missions, weapons, troops, and story. It’s hard to say where the base game ends and the expansion begins, but as it comes packaged with the main game it makes for a strict bonus to the experience.

Mechanicus’ story is strong, paying great attention to 40k Lore and getting a ton of material out of the anti-social personalities of the various tech priests. You see, as they alter themselves, Tech Priests often lose portions of their humanity, and for a faction that’s not exactly known for its fellowship you might question how they would function as a primary source of dialogue. Nonetheless, their various outlooks on the situation make for hilarious and engaging exchanges, all the while filling you in on their place in the Imperium. Their exploration of Necron lore gives you something of a crash course as well, letting you piece things together as you delve further into the tomb world. 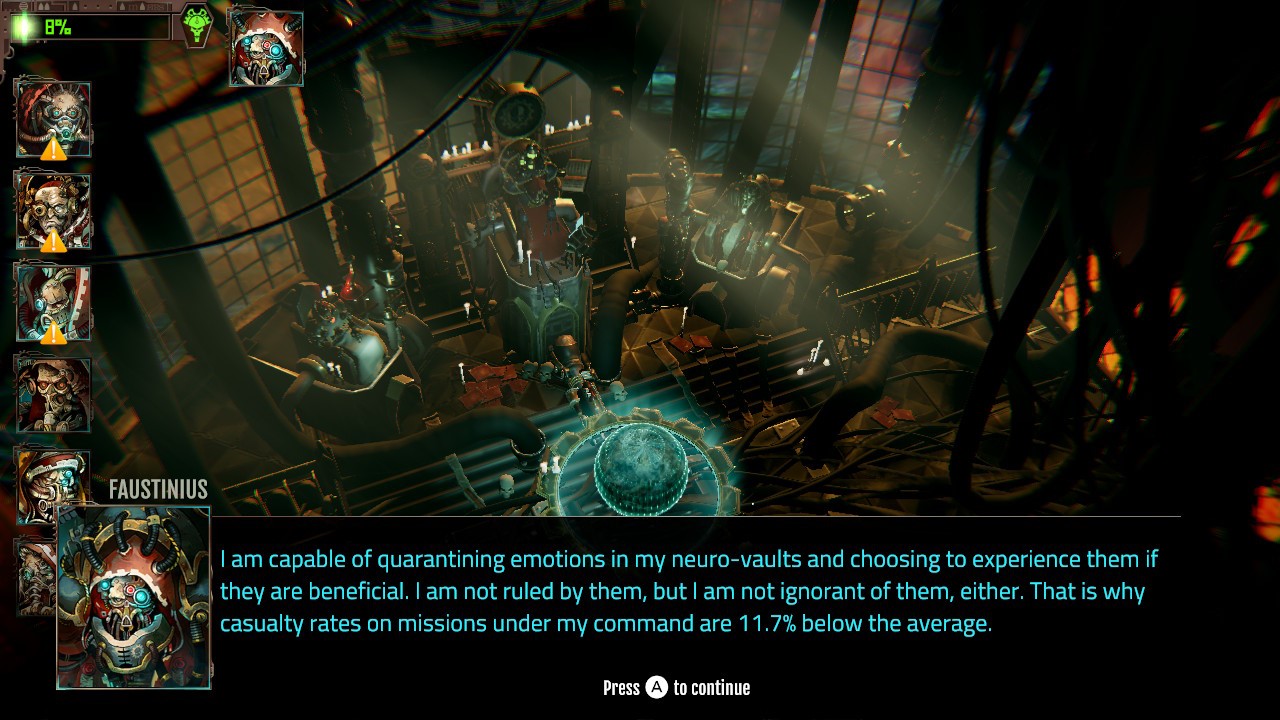 As far as I’m concerned, this straddles the line of dark, funny, and over the top that Warhammer at its best is known for

All those successes aside, the game is waylaid by some serious interface problems that make getting to the meat of the experience a near constant aggravation. Some of these stem from the fact that this is a PC port, and the transition to Switch is often not charitable. For instance, many of the text and icons that you have to interact with are large enough for a computer screen, but not for that of the Switch, meaning that reading equipment or abilities in handheld mode is a challenge; this is a true shame for a game that seems made for mobile, broken up as it is into discrete missions.

Controls are also a major issue. Oftentimes in menus only the control stick, not the directional button, is functional; it’s difficult to get used to. This should be an advantage in combat: stick controls movement and camera but directional character abilities, right? No. You have to hold the trigger, not toggle, to use character abilities. You do this multiple times every single round. Directional inputs activate canticles, which you use a MAXIMUM of three times per combat. It’s a pain, and one that you never shake. The game also features no control customization that I could find.

Pathfinding is also an issue due to the prevalence of opportunity attacks. Often your units have enough movement to get to their destination while skirting around enemies, but you don’t have a way to specify how they reach their destination. I also found the information presented to the player to be an issue. Despite the fact that you can scan enemies for their stats, the only information you receive is their current HP and armor. You have no way to gauge their capabilities or their weapon range, which makes strategizing around their abilities a challenge.

Mechanicus’ graphics are serviceable but not much beyond that. Character textures are blocky and indistinct, and your options to change your unit’s color patterns are minimal. They do distinguish themselves from one another via different weapons and equipment loadouts, which do make for nice silhouette changes. Mostly, combat encounters are a series of recycled assets, areas, and enemies swapped around within the tomb during its 20-25 hour or so playtime.

The sound design is wonderful however, wrapping you in the hostile, semi-religious drones of Necron machinery. Weapons and events are punctuated by specific sound cues, and the tech priests have their own unnaturally mechanical method of communication.

At times you will find yourself getting tired with Mechanicus, and it gets repetitive over time. Sometimes this is broken up with the unique challenge of a new boss or mission goal, which does genuinely give you meaningful decision making. I can’t recommend this game to everyone seeking a new tactics experience, but if you have an interest in the genre and enjoy 40k lore, there is a lot to offer if you can make it past the mechanical frustrations.

Warhammer 40k Mechanicus contains a bevy of interesting narrative and mechanical decisions, but this tactics game is also marred by questionable implementations of those decisions. This Switch port often feels poorly thought out, but if you can make your way past its annoyances, you will find an engaging experience, filled with love for 40k lore. I hope to see more from this team, as their creativity and skill shows through with charm, even if this entry was not ultimately without flaws.

John Farrell is a legal aid attorney specializing in domestic violence, living in West Chester Pennsylvania. You can listen to him travel the weird west as Carrie A. Nation in the Joker's Wild podcast at: https://jokerswildpodcast.weebly.com/
Related Articles: Warhammer 40K: Mechanicus
Share
Tweet
Share
Submit