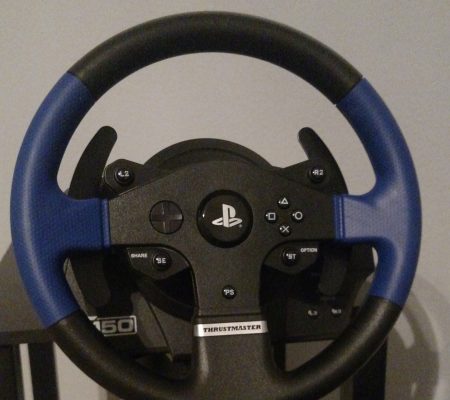 Thrustmaster has been making peripherals for the gaming enthusiast for a long time, but I’ve not had a chance to check out their more recent racing wheel options. When the Thrustmaster T150 arrived, and I saw that it was compatible with PC, PlayStation 4, and PlayStation 3, I knew I was in for a treat.

The Thrustmaster T150 is the newest offering in what I call the “immersion peripheral” space. Offering realistic Force Feedback takes something that would otherwise be a simple controller replacement to something that can change the way you play. If you are unfamiliar with the concept of Force Feedback, or haven’t tried something with that sort of tactile response recently, let me bring you up to speed.

Force Feedback, back in its earliest iterations, meant that the game would simply shake or pulse a quick or sustained vibration. It was the equivalent to the N64’s Rumble Pack. Not spectacular, but certainly better than nothing. Later, more rumble motors were put in to vary from which side the vibration was emanating, and to what degree, but you could still literally feel the little motors doing their best to include you in the action. The most recent iterations of Force Feedback are something else entirely. Imagine driving down a bumpy road with a real car. Now think about how it made your hands feel as you fought against the ruts, grooves, and edges of the road surface. Now imagine that being translated to the steering wheel in a game, translating minor and major surface imperfections into real reactions that you the player must contend with to keep your vehicle on the road. The newest iterations of Force Feedback are far more than just vibrations, offering up a realism that you might not otherwise feel using a simple controller.

Thrustmaster pushed up the quality of the T150 by using a mixed belt-pulley and gears system. If you’ve used cheaper racing wheels before, they are often noisy beasts and prone to gear slippage (where the helical gears decouple and ‘slip,’ potentially causing damage). The T150’s belt-pulley system feels smoother, and that’s directly in line with most of the rest of the system’s build quality.

There was one aspect of the T150 I had to get used to — the degrees of rotation. Most wheels can only eek out 960 degrees of rotation before you hit the hard stop, but Thrustmaster has pushed this to 1080 degrees for this product. This can create a bit of an oversteering feeling as it may take a bit more pulling on the rubberized wheel surface than you are used to. Thankfully, this too is adjustable, allowing the player to pull it down to as little as 270 degree rotation if they are so inclined. All in, the 12-bit resolution depth of the wheel’s drive system gives it 4,096 points of control within those 1080 degrees. If other wheels felt imprecise, you won’t have that problem here.

The F150 is a comfortable and extremely accurate review.

If there was one area where I felt Thrustmaster might have cut a corner or two, it’d have to be the pedals. The ones that ship with the T150 are fairly sturdy, but they are made of plastic. Depending on where you can clamp down the wheel (it does ship with an included clamp system, thankfully), you may need to adjust the pedal angles. Thankfully Thrustmaster thought of that, but every time I adjusted them I was reminded of just how fragile a plastic pedal can be when overzealous drivers get behind the wheel. There is a solution for the pedal issue, however; the T150 is compatible with both the T3PA and T3PA-PRO pedal addons, as well as the TH8A shifter if you are so inclined.

The pedals are the only weak point of this impressive package.

While we are on the subject of shifters, the T150 features a set of metal paddle shifters on the steering wheel. Most wheels at the sub-$200 price point have easily-broken plastic paddles, but Thrustmaster opted for something a bit more sturdy. They feel natural, and it doesn’t take any time at all to get used to using them over a traditional shifter.

The T150 is obviously not Thrustmaster’s first foray into the wheel market. They did ship a now-discontinued T99 product as an entry point for new racers. The T99 had a frustrating limitation, requiring players to use their Dualshock to navigate menus between races. The T150 solves this with 13 buttons, a D-pad, and even a pair of buttons to emulate L2 and R2. On the PlayStation 4, they’ve even given us a PlayStation, Share, and Options button, allowing you to reach all of your screenshots, videos, and social sharing menus. Not having to bounce between the controller and the wheel keeps the immersion right in front of you — a major plus for the T150 over its predecessors.

Testing this on the PlayStation 4 with Driveclub and DiRT Rally on the PC made for a wildly different experience. Driveclub gave me tactile feedback, allowing me to feel my tires lose grip when I oversteered, and increasing amounts of counter-force as I approached that slip point. Conversely, DiRT Rally allowed me to feel every rut, bump, and jolt as I skidded around corners and through the dirt and gravel. If you’ve never played a racer with a wheel, it’s hard to describe, but you’ll wonder why you ever used a controller once you do.

The T150 roars across the finish line at a very competitive price of $199. Thrustmaster’s own T300 is double this price, and the T150 matches it in almost every feature but the pedals. It isn’t often you see this level of quality at such an aggressive price point, but the T150 delivers on the promises the T99 couldn’t. If you are a racing enthusiast, this wheel is fantastic. If you are a rookie, you can’t beat this as your entry into the world of Force Feedback racing.

Ron Burke is the Editor in Chief for Gaming Trend. Currently living in Fort Worth, Texas, Ron is an old-school gamer who enjoys CRPGs, action/adventure, platformers, music games, and has recently gotten into tabletop gaming. Ron is also a fourth degree black belt, with a Master's rank in Matsumura Seito Shōrin-ryū, Moo Duk Kwan Tang Soo Do, Universal Tang Soo Do Alliance, and International Tang Soo Do Federation. He also holds ranks in several other styles in his search to be a well-rounded fighter. Ron has been married to Gaming Trend Editor, Laura Burke, for 21 years. They have three dogs - Pazuzu (Irish Terrier), Atë, and Calliope (both Australian Kelpie/Pit Bull mixes).
Related Articles: Thrustmaster T150 Racing Wheel
Share
Tweet
Share
Submit