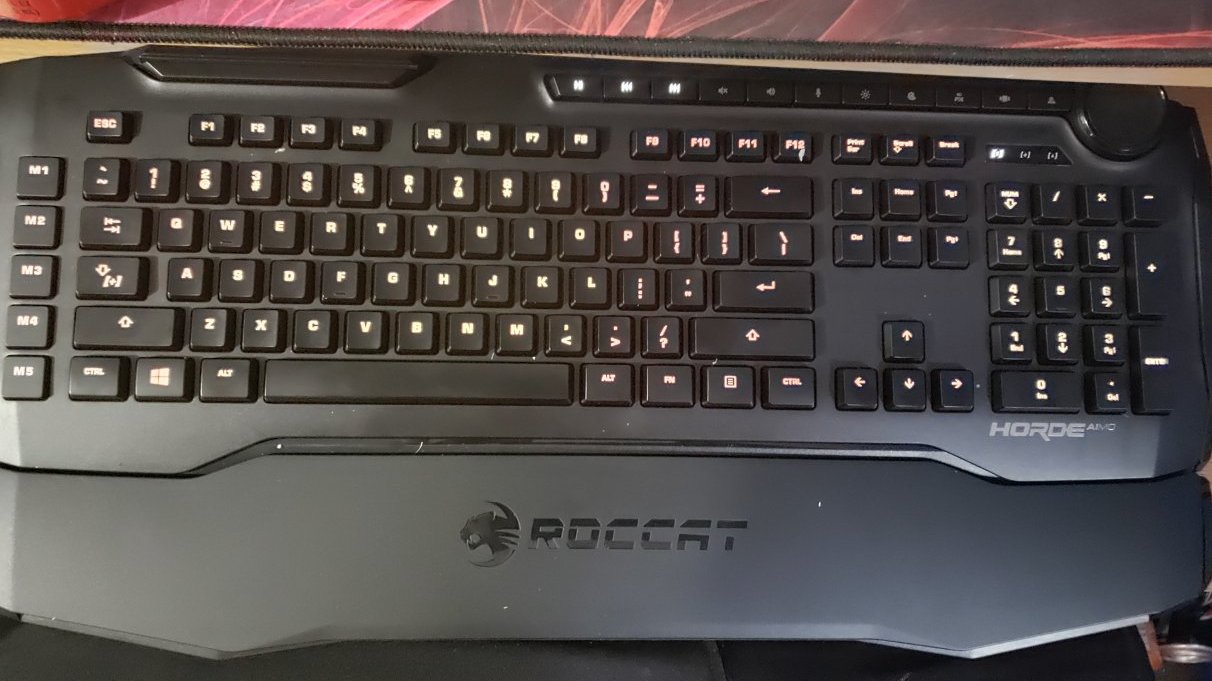 The Horde AIMO is a decent keyboard, but its price point immediately makes it difficult to recommend. To put it simply, $90 for any keyboard is a lot. After using it to play Destiny 2, The Conjuring House, and Pillars of Eternity 2, I just don’t believe it is worth the price over other similarly priced, or even cheaper, keyboards.

One of my biggest issues with the Horde AIMO is that the backlighting on the keys is very dull. This makes it difficult to use in the dead of night with the lights off, which is the perfect setting for a good horror game. The dull lighting also contributes to it just looking ugly. It’s really bulky and the lack of lighting allows the plain black body to catch the most attention. A lack of vibrant lighting combined with a lack of creative design leaves you with a keyboard that isn’t easy on the eyes.

I never found a real use for the tuning wheel.

Now, does it type? Well, it’s a keyboard, so yeah. As someone who types pretty fast, The Horde AIMO never had any problem reading my keystrokes and all the keys are exactly where they should be. Being a membrane keyboard, it is much quieter than a mechanical keyboard, for better and worse. Personally, I have always enjoyed orchestra of a mechanical keys clacking as I type. The Horde AIMO is definitely better for gamers who play around other people a lot as it is silent. As for keys, the Horde AIMO has the usual set plus some special ones for gamers. It has the usual programmable four keys on the side which are great for macros. Uniquely, it also has a tuning wheel. The wheel can be set to control monitor brightness or the dpi of the mouse but I just never used it. It just sits there in the upper right corner and contributes to why the keyboard is so bulky. I’m sure some could find a good use for it, but it wasn’t for me.

I do appreciate that it does have a bump on the ‘W’ key. As a gamer, I spend a large portion of my time on a keyboard in the traditional WASD stance, and it is nice to have a marking to keep my fingers orientated. This is something that is oddly lacking in a lot of gaming keyboards. The Horde AIMO also comes with a detachable palm rest. The palm rest sounds good on paper, but the execution needs some work. The palm rest actually puts your wrists at an awkward angle. If you find yourself using the palm rest, then you are going to give yourself carpal tunnel syndrome. It is also just a hunk of plastic that connects to the keyboard. Calling it a ‘rest’ is being very generous; it is more of a palm stand.

Extra buttons for those who use macros is always appreciated.

Another big issue I have is with the software, as in I can’t download it. The software allows for more customization of the keyboard such as color settings and key bindings. For whatever reason, it keeps trying to update my Microsoft C++ which gets it stuck in loop of restarting and not downloading. My first issue, before that, is that it gives me it in a zipped file. Why? Unless I’m getting a broken file, the zipped file only contains the .exe to start the download. With both Kingston and Razer you just hit a download button and it works fine.

The Horde AIMO would be easy to recommend if it were around half its current price. The keys don’t feel as good as a mechanical, I couldn’t get the software to work, and the lights are dull. It simply isn’t as good as the competition despite being more expensive.

The Horde AIMO would be easy to recommend if it were around half its current price. The keys don’t feel as good as a mechanical, I couldn’t get the software to work, and the lights are dull. It simply isn’t as good as the competition despite being more expensive.

Austin Fern has been playing video games his entire life. The first console he truly fell in love with is the PlayStation 2 with Sly Cooper, God of War, and many others really leaving an impression. He enjoys all genres of games from FarCry 5 to Danganronpa and everything in between.
Related Articles: Horde AIMO keyboard
Share
Tweet
Share
Submit