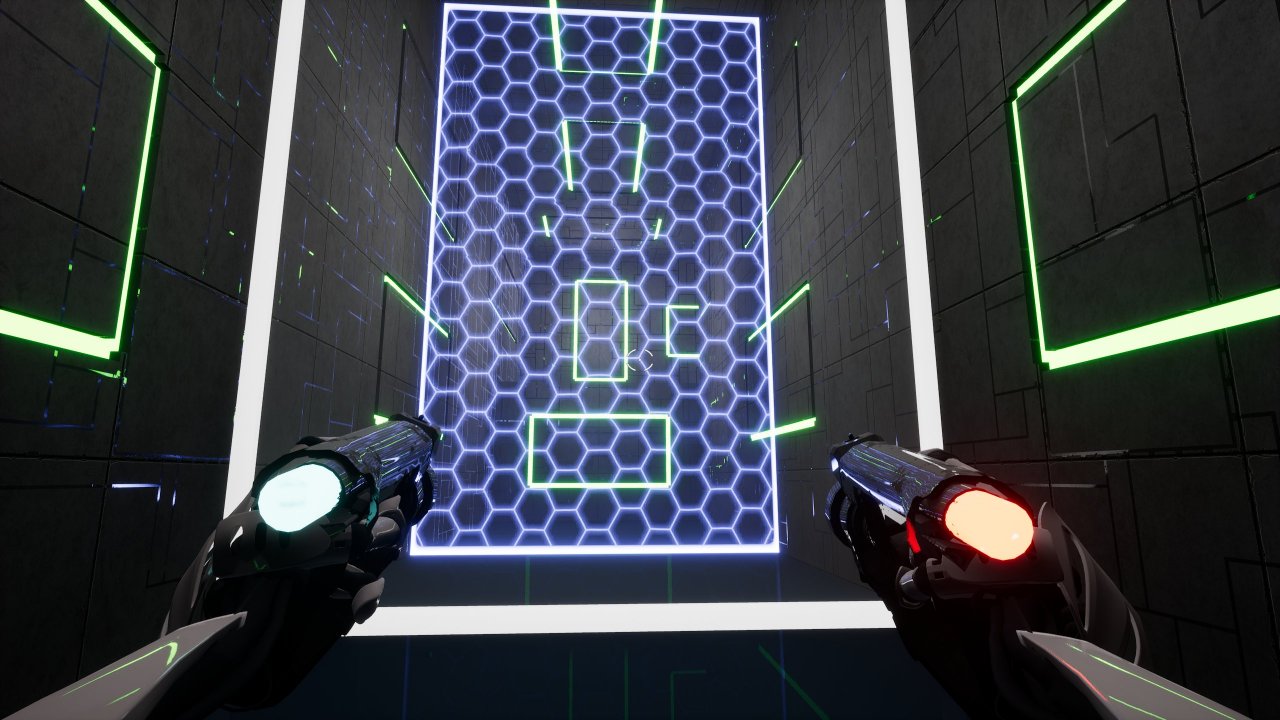 It doesn’t take long to get the general feel of Impulsion. The first-person platformer has you running and leaping all over the place with two unique guns very quickly. While the game is clearly inspired by Portal, it is a very different experience. It lacks the deep lore and story telling found in Portal, but has much quicker pace that keeps you running completing level after level.

The first gun you you gain access to allows you to lay down blue force fields that increase your speed and jumping abilities. The second gun allows you to shoot red force fields on specific platforms to slow down time and act as a double jump. These two guns work well together to keep you running and jumping smoothly along the difficult levels. A quick restart button means that failure was just a lesson on what not to do rather than a punishment. I was always eager to jump right back in and give a level just one more try. When I finally managed to beat it, I was just as eager to start the next level. While it is a shorter experience, lasting only three to four hours, it never got stale. I lasts only as long as it needs to. While better writing and voice acting would have been appreciated, the great level design and satisfaction of overcoming difficult puzzles more than makes up for it.

I do wish the levels were as visually diverse as the puzzles are. They are very basic white and red platforms with the same grey lab walls. While I understand that this is to represent that you are in a simulation, it isn’t interesting to look at. Thankfully, I was too busy trying to figure out the most efficient way to get through the puzzles to really worry about how the scenery looked. Impulsion constantly throws new challenges while building your skills from the old challenges. It’s not long before your blasting your blue gun down on disappearing platforms to jump on moving red platforms with limited time to aim your red gun in between. There are also a few levels where you are on a constantly on moving platform which forces you to be careful as you dodge and jump over objects as using the blue orb speeds up the whole platform forcing you to quickly aim high enough on the wall to reach, but not hit the, platform. Other times you want to speed up the obstacles in your way. Impulsion will often lay several red walls in the way that move in sync. You have to figure out the best pattern to speed them up to get through without death. Dying means restarting the entire level, which can be a pain in later, levels as the difficulty and length increases.

Computer to take you to the virtual world so you can die all you like.

Impulsion also offers a fun incentive to keep playing after you beat all the levels. The game is built for speed running, and has speed running options built right into the game. Once you have mastered Impulsion’s mechanics, speed running adds a timer so you can see just how good or bad you are. The game also has leaderboards to see who claim the quickest times on the 25 different levels. While I’ve never been a fan of climbing leaderboards or speeding through games, these are great options to extend the playtime.

While Impulsion doesn’t reach the same heights as Portal, it is an enjoyable, fast-paced platformer in it’s own rights. I was always eager for the next challenge and never afraid to fail and learn. While it may not be a long experience, I enjoyed every minute of it.

While Impulsion doesn’t reach the same heights as Portal, it is an enjoyable, fast-paced platformer in it’s own rights. I was always eager for the next challenge and never afraid to fail and learn. While it may not be a long experience, I enjoyed every minute of it.

Austin Fern has been playing video games his entire life. The first console he truly fell in love with is the PlayStation 2 with Sly Cooper, God of War, and many others really leaving an impression. He enjoys all genres of games from FarCry 5 to Danganronpa and everything in between.
Related Articles: Impulsion
Share
Tweet
Share
Submit