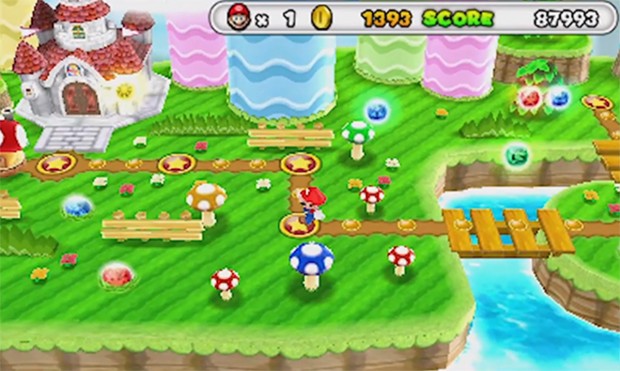 I don’t play a lot of what might be categorized as casual games. I found Candy Crush to be fairly pay-to-win, so that didn’t stay installed long. Don’t get me wrong — I love gem-matching games, but other than efforts from Popcap, I always feel like they are tied to some horrible energy or time limit mechanism designed to pry cash out of my pocket. When I heard that Nintendo was combining the genius of Puzzle & Dragons with their signature style and flagship characters, I knew I would finally have another great mobile gem shuffler, but with a completely new twist.

Puzzle & Dragons isn’t new. In fact, it actually came out for iOS, Android, and Kindle Fire back in 2012. The game combined elements of gem matching with monster battling, pitting the titular dragons against dungeon denizens both creepy and cute. Building a team of up to six creatures, you’ll deal damage by matching the creature color with the various tiles on the board. Fire, Water, Wood, Light, and Dark play out in a paper-rock-scissors system where matching three (or more) of the same color does damage to a single creature. Matching more colors does more damage, and matching five of them unleashes an area of effect attack that damages all foes. It’s all very straightforward, but hides a larger level of complexity underneath. GungHo Online Entertainment was on to something — $2.6 billion dollars (and counting) of something, to be precise.

Teaming up with Nintendo, the team at GungHo wanted to bring the world of Puzzle & Dragon together with the biggest video game stars of all time; Mario, Luigi, and all their pals. While the core gameplay remains largely the same as the root product, it’s that little bit of Nintendo flair that makes this version uniquely theirs. Well, that and the complete removal of the pay-to-play mechanic.

Nintendo has recently announced the DeNA program, and Puzzle & Dragons is the first real example of it in practical use. GungHo is able to use some of the most beloved and recognizable icons in the videogaming world as a result of this relationship. The story is everything you’d expect — Peach has gotten herself Bowser’d again, and it’s up to the plumbers-who-never-do-any-plumbing, Mario and Luigi, to get her back. With the help of Toad, they’ll battle Goombas, Chirp Chirps, Turtles, and more to rescue her, but that’s where things get a little different.

In both Puzzle & Dragons Z and the Super Mario Bros. Edition (both games are included for the price of one!), you can recruit the creatures you defeat. They’ll drop loot, and you’ll earn experience to level them up in an RPG-lite fashion, but you can then turn around and train those same beasts to fight for you. They’ll evolve, combine, and become stronger in a very Pokemon-esque way through dropped loot and money. As an example, a Goomba when combined with a number of P-Wings can become a Paragoomba. When they evolve, their skills reset back to level 1 but are ultimately stronger as they grow.

The party creation element is where the RPG portions of this game arrive. As you recruit creatures you’ll be able to level them up and earn skills. These can be direct damage, buffing your party, changing orbs from one type to another, and more. These skills are powered up as you pass rounds, and you’ll likely need them against the bosses you encounter at the end of levels.

If there is one aspect where Puzzle & Dragons Z is far and away better than the Super Mario Bros. variant, it’s in variety. There are roughly 80 different creatures you can recruit to your team in the Super Mario Bros. side of the game, whereas the Puzzle & Dragons Z side will surprise you with characters from Batman, Dragon Ball Z, Final Fantasy, Hello Kitty, and far more. I’m not sure how many are included, but if it’s easily in the thousands.

As the game moves forward, you’ll find that enemies have special powers that they’ll unleash on you. Bloopers spit ink on the field, obscuring some of your gems until you move them (and thus, starting the counter). Some enemies can shield against specific attack types, and others even have the power to run away from you in battle.

If there is anything that could be perceived as a negative in either title, it’s the grind. Levelling up, combining creatures, (potentially) resetting your powers every time you evolve — these are the mechanics you’d usually find tied to a nuisance-based microtransaction freemium game. Thankfully the pay-to-play system has been removed, but the sticky underpinnings remain. If the combat wasn’t so satisfying, it’d be a problem. You’ll also earn “Awakened skills” as extra passives to bolster your team, as well as enabling special attacks by evolving courtesy of collected items. It creates a bit more grinding, but at least you feel like you are creating a powerful team. Since you’ll have to carefully consider which of your six teams to bring to each level, based on the gem colors you’ll encounter, powers needed, and overall stats, building diverse sets of teams is critical.

There are three mechanics that make this game different than the usual match-3 game. The first is the party-building mechanic that will have you levelling and swapping out your characters to ensure you have the correct colors for the creatures you’ll encounter. Next up is the orb system itself. As opposed to other games where you can only slide the gem one position, Puzzle & Dragons allows you to move that gem as far as you want to create a match, displacing the other gems in the process, which is key to swinging those much-needed combos. What ties it all together is the third item — an active time gauge. As you slide the gems into position, there is a small bar on the side that presses you to do it quickly. Failing to do so means you forfeit your turn, so the risk/reward here is very real. You can take a long as you’d like to plan your next move, but once you slide the orb, you cannot go back.

Put simply, this game is incredibly addicting. The simple match-3 gameplay gives way to real strategy when facing multiple foes from different elemental trees. On the Super Mario side of things you’ll march along a checkpointed world layout not unlike Super Mario Bros. 3, with offshoots, alternate paths, warp pipes, hidden worlds, and special destinations. You’ll want to explore every section too — despite the cutesy nature, this game can be very difficult.

Much like the sometimes-punishing platforming roots of its namesake, the bosses in this game can be absolutely brutal. Latter levels have familiar faces that can obliterate your entire team in a round or two if you aren’t appropriately leveled, so you will spend a bit of time doing that aforementioned grinding dance.

Puzzle & Dragons Z and Puzzle & Dragons Super Mario Edition provide something that is often missing from Nintendo 3DS titles — bite sized entertainment. Games like Bravely Default, Pokemon, and others are usually a larger time investment, but these two games deliver engaging chunklets of fun that play out while you wait for your movie to start, the bus to arrive, or whatever other short-span lulls you happen to have in your day. As a result, this game nicely serves the casual player, as well as those who enjoy a solid RPG-lite experience.

There is one hole in the DeNA plan that Nintendo has put forward, and we’ve seen it pop up in games like Metroid: Other M or Link: The Faces of Evil; nobody can do Nintendo quite like Nintendo. GungHo has done a decent job, and all of the characters and setting are present and accounted for, but it never really comes together in a way that feels like it was made by the Big N. That isn’t to say that the quality isn’t there, but the Mario Bros. side of the game does feel a little bit light on story.

Unfortunately, I wasn’t able to test out the local Player Card trading system. It’s supposed to allow you to send your characters to other players for them to recruit into their party. From the sounds of it, it works not unlike like Bravely Default’s system, though permanent. I’ll update this review when the game is live and more people have the opportunity to join the battle.

Puzzles & Dragons and the Super Mario Bros. Edition games in the same package for just $29.99 should make any match-3 addict happy. While the stories may not set the world on fire, the compelling gameplay is very accessible but tough to master. The great news? You don’t have to take my word for it -- you can try it for yourself via the demo in the Nintendo eStore. Just prepare for some serious addiction.