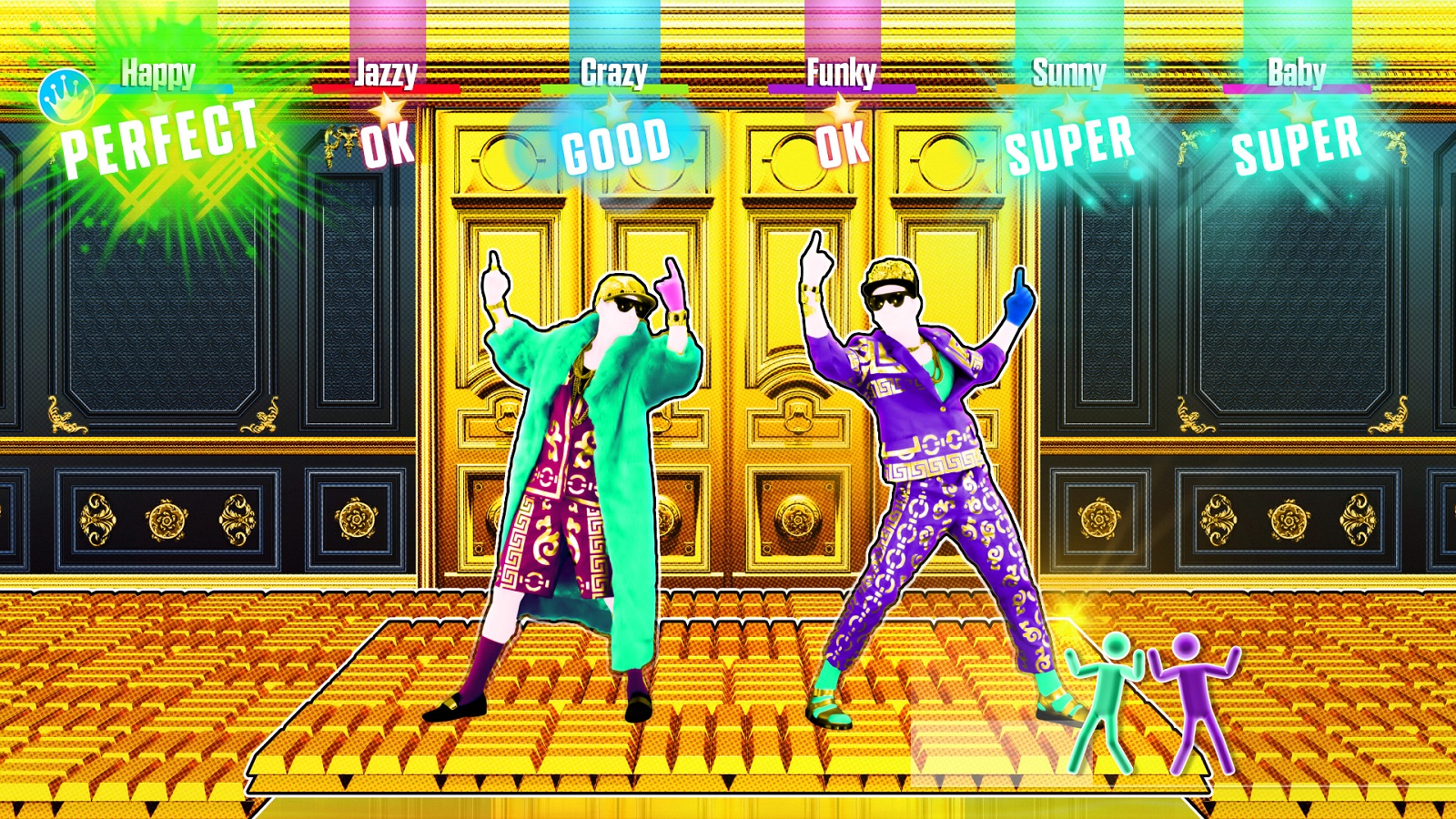 When I think of casual party titles that I can get anyone to play, I usually think of Just Dance. Its accessible gameplay mixed with some pretty eclectic songlists are a couple of reasons I’d recommend the series to those looking for a good time with no frills. While the series did make its Switch debut with Just Dance 2017 earlier this year, Just Dance 2018 is here now, and it brings a bunch of new features that will have you dancing all night long.

That wasn’t a Persona 4: Dancing All Night reference, but speaking of Japanese games, JD 2018 has another Hatsune Miku song!

The gameplay of Just Dance is simple: Grab a Joy-Con (or smartphone) and follow the on-screen dancer (or dancers) as they perform moves to the music. You get scored by how accurate you follow moves, and you can even score big points by following a select few gold moves scattered among different songs. It’s not too complicated, but later games in the series have added to the formula, adding things like extreme versions of the songs as well as alternate choreographies, and it’s really interesting to compare the first Just Dance game from 2009 to today’s 2018 release. While the game gives you a star for every 2,000 points you earn at a max of five, you can actually get superstar and megastar ranks if you play well enough.

It might be the controller itself, but I felt that the Joy-Cons were perfect for tracking movement; while I still contend that the Wii and Wii U versions of the game are the most accessible in terms of controllers, there are a few times I felt that the Wiimotes were inaccurate in scoring points. Here, the Joy-Con fits like a glove, and even utilizes HD rumble to help players with keeping the beat. It’s a great controller for this game, and if you don’t have enough for a six-player party, you can always switch to smartphone controls.

While the gameplay is simple yet accessible, it’s the presentation and content where Just Dance 2018 shines. Each of the forty songs included look and sound great. They’re all distinct and are bright and colorful; they display a sense of goofy charm that fits perfectly with the Switch’s all-ages demographic. For those looking for classic songs the likes of the first three Just Dance entries, you might be disappointed: three-quarters of the songs were released last year or earlier, and half of them focus on top 40 hits such as Despacito (the original, not the Justin Bieber one) and Swish Swish. However, the other songs range from a hard rockin’ good time (Another One Bites the Dust) to hilariously silly (Beep Beep I’m a Sheep makes an unexpected appearance here.) The background visuals are all distinct from each other, and even those just watching are in for an entertaining treat. (Okay, more of a treat than watching friends dancing like idiots, but still.) From the sci-fi silliness of Kissing Strangers to the almost videogame-like routine of In the Hall of the Pixel King (which is based on In the Hall of the Mountain King), the presentation just oozes style.

You can also twerk with a reindeer. WHAT A TIME TO BE ALIVE, FOLKS!

The problem that I usually had with the Wii entries during parties was that there was always that moment when a friend recalled a song and said, “Hey, I remember playing this song. Where is it on here?” I had to frown and either switch the disc to another game or lament that I didn’t buy the installment the game was on. This was thankfully rectified since Just Dance 2016 with the addition of Just Dance Unlimited, a subscription service that adds songs new and old via streaming. If you’re bummed out at the selection that the main game offers, you’ll be glad to know that most of the songs from the previous Just Dance titles are here for your perusal. Over 150 songs are available at the time of this writing (including picks from the previous title if you missed out), and Ubisoft adds new routines all the time, so you’ll be busy finding a new favorite. There are a few hiccups with this service, as the quality of the background visuals can vary depending on your internet connection (most songs will look choppy for the first twenty seconds or so), so just make sure you have reliable internet before you dig in. There’s a free trial included with new copies of the game, and it’s cheap enough for an impulse buy ($30 a year or $10 for three months, with a couple shorter subscription periods available). It’s also a testament to the evolution of the franchise; seeing choreography on songs from the early Wii games (though remastered) alongside the titles released as recently as last year really increases the replay value of this game, and is backwards (and forward compatible) with songs released on Just Dance Unlimited. The Switch version also adds the song Just Mario into the mix, which previously debuted in a Japan-only entry, and it’s as silly as it sounds.

For a music game that’s bursting with songs content, there’s a surprising amount of modes that are available too. As you continue to dance and rack up stars, you will earn mojo coins that you can use to buy items within a gacha-like system (a gumball machine that gives you items at random, though it’s totally free); there are tons of unlockables, mostly stickers and avatars, but still award a sense of progression within the game. You also have missions you can accomplish every time you boot up the game with things ranging from “earn 25 stars in Just Dance Unlimited songs” to “customize a playlist”. Again, they’re not game-changing, but are a nice touch to add to the content available. You can also track your fitness goals through the sweat mode (which can be activated with a touch of a button), that tracks time played as well as kcal burned.

There are two other modes returning from previous entries: World Dance Floor and Dance Lab. The former has you dancing in a team with others that are playing the game as well as you pick a side and dance for the highest score (think of something like Fire Emblem Heroes where you play independent of others and add a score at the end of the song). You can also encounter bosses here which you can destroy with the help of those online (reminiscent of a raid boss in something like KH Unchained or Pokémon Go). It’s a basic mode that could be a bit fleshed out, and maybe something Ubisoft could improve in future titles. The latter was featured last year, and has you doing some different choreographies to generic sounding songs. While these “episodes” (as they’re called) aren’t remarkable in the sound department, they’re pretty entertaining and act as a quick break from more serious routines. (Plus I dabbed during an episode. I can chalk that up as a millennial win.)

Speaking of millennials, there’s also an Ariana Grande song in this one too.

If there’s one mode that felt like a legitimate throwaway, it would have to be the inclusion of a kids’ mode in the main menu. It’s a watered down selection of songs that are considered “kid-friendly”, which means that you have a few generic sounding songs that were tailor-made for this mode as well as around half a dozen songs ripped from the main game. This feels like an understatement and a waste of space, especially since the in-house music for these songs are forgettable and tame, and would bore any kid who would play these. If you have Just Dance Unlimited, a few more songs will be available (the Angry Birds theme song comes to mind), but on the other hand, you have some songs there that aren’t appropriate (Really? Ke$ha’s “C’mon” is included?) The inconsistent censorship is a bit odd as well, as alcohol references and some mild swearing can be muted in some songs but not others. I’d say that the Just Dance series is appropriate for pre-teens and families, so the kids’ mode is wholly unnecessary.

Finally, the Switch version of Just Dance 2018 comes with an exclusive mode, and one that I’ve wanted for a while: Double Rumble aka the ability to use two Joy-Con controllers! These modes feel a little like the Dance Lab episodes, except all the moves are related to a central theme, be it a construction worker or chef. Now that you have two hands, you can easily work on the choreography, and the game just feels perfect here. I just wish this would be included with the actual main game songs (at the very least), but for now, it’s a neat little addition that might influence the Switch version being the definitive Just Dance 2018 experience. One minor gripe I had with the Switch version of the game was the fact that I couldn’t capture screenshots of the choreographies in-game. It’s an odd restriction and the only other instance I’ve experienced this was when browsing the eShop. It’s not dealbreaking, but it would’ve been cool to take a picture of the hilarious dance moves without resorting to a capture card or other methods. You also might have difficulty playing this in handheld mode, though if you’re looking for a quick workout fix, it’s surprisingly serviceable.

Just Dance 2018 is a groovy addition to any party. A fun time to be had by all, the addition of Just Dance Unlimited and the ability to use two Joy-Con controllers for a few songs is a welcome treat for Switch owners.

Elisha Deogracias is an aspiring accountant by day, freelance writer by night. Before writing for Gaming Trend, he had a small gig on the now defunct Examiner. When not being a third wheel with his best friends on dates or yearning for some closure on Pushing Daisies, he's busy catching up on shonen manga and wacky rhythm games. Mains R.O.B. in Smash. Still doesn't know if he's a kid or a squid.
Related Articles: Just Dance 2018
Share
Tweet
Share
Submit