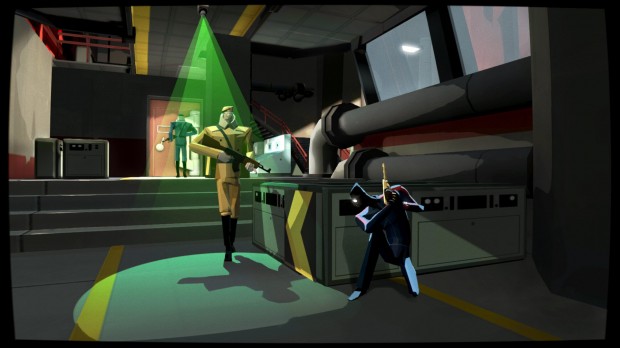 Some iOS ports make perfect sense. If a game possesses simplistic controls that translate well, It is easy to imagine it sliding over to a portable device that everyone can have on the go. Developer Dynamighty created a very entertaining product in CounterSpy when it was released on the PS4. But one of the major bullet points in the game was its tight controls, which still translated to a difficult experience. So could the game make the smooth transition to iOS?

CounterSpy possesses a style unique to itself. The characters seem a tad larger than they should be and the environments mesh effortlessly with the Cold War-era. Throughout your many missions, you will find a multitude of flyers and posters which say things like “SMOKING – Smoke ‘em if you got ‘em!” instead of the “No Smoking” sign you would see these days. This is just the tip of the iceberg, as finding these little paper gems hidden around the environment can be one of the many entertaining things to do in the game. When you are not marveling at the witty set dressing, your eyes can not help but admire the colorful look of CounterSpy. The art in the iOS version of Counterspy is still varied, but it does contain some rough edges that seem out of place. On top of that, some framerate issues do appear. These minor issues are disappointing but also hardly noticeable for anyone who has not played the PS4 version of Counterspy.

The actual story of CounterSpy involves you, the spy, invading both the “Socialist” and “Imperialist” (as the game calls them) bases. You are doing this invading for a group called C.O.U.N.T.E.R., who was tipped off that both nations desire to be the first to launch a nuclear missile and blow up … the moon. In order to stop this atrocity, you must seize plans from either side, all while making sure you do not make the respective side raise their DEFCON level too high. If the DEFCON goes past one, it is time for lift off, unless you can get to the end of the mission you are currently on within 60 seconds. You manage these levels by invading both sides; once you invade the Imperialists, the Socialists will become a bit more comfortable and vice versa.

You can force the nation to raise their DEFCON in a variety of ways, with death being the quickest. If the Socialists DEFCON is at 2 and you die, it goes down to 1. The enemies can also get scared and begin alerting a commanding officer to raise the DEFCON, which means a circular bar will fill up completely in about 15 seconds. This circular bar will also fill if you are caught by one of the many cameras in-game, some of which are indestructible without a certain upgrade or explosive barrels. Possibly the most difficult aspect of the DEFCON meter is the fact that the circular bar does not return to empty if you destroy the camera or kill the enemy ratting you out. It ends up making the game feel like a tense micro-managing nightmare as you hope and pray the enemies in front of you do not alert authorities, all while watching out for a camera and hoping you do not take a few bullets and keel over.

While spying on the other nation is one way to lower the DEFCON, you can also capture generals while on the ground. You do so by eliminating all surrounding enemies and aiming your gun at the general, who will be easily noticeable by his bright white outfit. This will lower the DEFCON by 1, but can also be the death of you if you do not watch out. Dying in CounterSpy is something that will happen, and if your experience is similar to mine, it will happen quite often.

The amount of death only increases in the iOS version, but with each feeling cheaper and more broken than the last due to atrocious controls. Counterspy deters away from having an on-screen controller like most ports do, which is respectable, but their substitution is ten times worse than the other option. Movement is centered around swiping right or left once for sneaking, or swiping twice to sprint. Your spy then moves continuously until you hit the screen once more. This control scheme is very awkward as precision is required to sneakily navigate Counterspy’s many 2D landscapes.

Unfortunately, the movement in Couterspy’s iOS port is probably the most well -executed aspect of the port as everything gets worse from there. You enter cover by double-tapping the screen, and perform executions by doing the same thing when you are near an enemy. While being in front of cover and beside an enemy is a situation that does not appear often, when it does, it is incredibly frustrating. It does not stop there, as you aim by holding your finger on the screen and sliding it around to pinpoint where your bullet goes, and then tap with another finger to initiate the shot. When you are going against one or two enemies, this is acceptable. But the only time you go against that few of enemies is early in the game; once you get deeper and deeper you start to face 5-8 foes, sometimes more than that. While in the console version of Counterspy, death was an impending doom you navigated around in many different ways, death is inevitable in the iOS version. It is also monumentally more frustrating.

While there are many annoying aspects in Counterspy’s iOS port, the worst offender comes via the disappointing controls. While going through a mission, once an enemy hears you, they will begin to call someone and raise the DEFCON meter. You are then required to get to that enemies location and kill him before he raises the meter too much. Getting to him is a recipe for anger as you stumble around with the horrid controls and hop in and out of cover when you are clearly just trying to jump onto a platform, which you do by swiping upwards.

Another negative that plagues CounterSpy is that it ends a tad bit earlier than you would hope. You obtain all the intel you need within two hours of game time. The last mission takes place in the country who has the highest DEFCON level at the time, and the game allows you the option to go back into those countries before selecting the final mission in order to lower the DEFCON. Of course, there are the aforementioned unlockables and such, but when a game is relying on unlockables to get the time played mark past four hours, that is disappointing.

The wide variety of enemies contribute to the always-present feeling that death is right around the corner. While some bad guys are just simple folks with a pistol or machine gun, others have armor on their head or are a higher rank, meaning they take a whole lot more bullets before going down. Perhaps the biggest factor contributing to my high death total was the amount of times I ran into enemies carrying grenade or rocket launchers. As you could guess, those can make your day really bad, really fast.

To combat this, you have a variety of different weapons. Half of the weapons are reminiscent of the times as they seem like oddities that would have been tested out in the 60’s, while the other half are your standard machine gun, shotgun, pistol combinations. While the simple weapons lack that creative aspect, they make for a very vital aspect of being a spy. As you could guess, the value of a silenced pistol is hard to top. You unlock these weapons by finding safes throughout the level which contain blueprints, with each weapon having its own unique blueprint. Once they are unlocked, you still have to fork over thousands of dollars, that you earn through being stealthy and completing other objectives within each mission. Money is a valuable commodity as you do not regenerate ammo between missions, which means you have to buy it all back, which can take up more than a few dollars. On top of that, there are modifiers you purchase and add to the mission, such as the ability to destroy those pesky armored cameras. Those modifiers also cost a pretty penny.

CounterSpy’s console versions are a blast to play. The controls work effortlessly to guide you through a quick, but memorable adventure. Those controls do not translate well to a touch screen device, something that should have been easily predictable for the developers. For a game built around not raising the DEFCON, the awful controls make that task near impossible. While CounterSpy on consoles is a delight, the iOS version is a near unplayable mess that should be avoided at all costs.