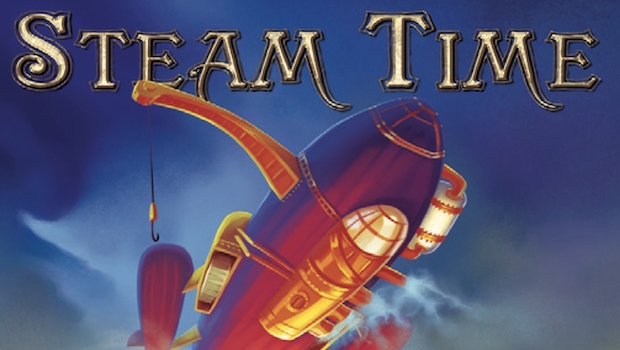 Steampunk, that amalgamation of Victorian-era charm and science fiction concepts inspired by the likes of Jules Verne, produces a certain romanticism. Steam-powered machines and lighter-than-air vehicles are a staple of the genre. Kosmos’ Steam Time uses steampunk as a backdrop for an elaborate worker placement adventure through time.

Two to four players cast back to 1899 race time-traveling zeppelins to gain knowledge about mystical crystals appearing around some of the world’s greatest monuments. Not only will players visit exotic locations, but they’ll also encounter some of history’s greatest thinkers, such as the well-known Leonardo da Vinci to the less familiar Yi Xing. The backstory gives the game a great theme, though the game’s goal is less climatic. Instead of a race to gather as many rare resources as possible, the goal is to garner as much esteem as you can from T.I.M.E, the Temporal Institute for Monument Exploration. T.I.M.E. acts as each player’s sponsor looking for the best explorer of the pack.

Mysterious crystals are central to the game’s theme and play, but it’s prestige that wins you the game.

Plenty of high quality components inhabit the $59.99 MSRP box, from the colorful array of game and player boards to the crystals, monument boards, various tiles, and gold. The end result may look more like a Jackson Pollack painting rather than the darker tones synonymous with Steampunk. Still, it’s impressive once you’re ready to dive into the game, but note that setup involves 21 listed steps in the rule book. It’s going to take some time before the game even begins, even with just two players.

Though the game relies heavily on worker placement, resource management is vital to managing your airship. Each player board represents a zeppelin and all its possible upgrades. Those mysterious crystals found throughout history create the cornerstones for the most efficient dirigible. Crystals come in several colors, with each able to upgrade a specific part of your airship. T.I.M.E. also has access to clear crystals. These act as wildcards and can be placed in any upgrade position. The more crystals you have at your disposal, the more options you have during your turn. Crystals can add bonuses to upgrades or can be spent to travel through time and space to complete expeditions. It will take a few plays to see how interwoven the crystals are with player actions. Once understood, the game’s various action options become clearer.

During player actions airships move to different positions on the monument boards. Six possible actions include: mission, encounter, crystal deposit, upgrade, gold, and expedition. No one monument board has all six options, but each shows up on different boards so there’s not a race for a particular option. The six actions have colors that correspond to a power section on the airship. This is where the strength of your airship comes into play. The encounter action, for example, allows you to meet a famous thinker from the past. The encounter icon is blue, which is the same color as the steam section of your airship. The more steam you have when performing an encounter action, the more bonuses you get for completing the action. Each action has its own advantages which is nice in that it leads to multiple paths of victory. Still, there are two actions that are worth noting.

There are many upgrades options to your airship, but you don’t need to invest in all to be successful.

Upgrade actions add permanent bonuses to your ship during each income round. These can be invaluable as they provide a nice boost to esteem, extra crystals, or extra gold. Unlike most actions, upgrades actually cost you crystals to perform. The better the upgrade the more crystals it costs. In my test games I was able to be competitive without scoring many upgrades, but the upgrade advantage does come more apparent in the game’s later rounds.

Expedition actions act as the game’s risk versus reward option. Expeditions grant significant bonuses that increase if a player’s airship contains more orange crystals. Yet, these bonuses usually come at a high crystal price. Timing is a key factor on when to embark on an expedition since the loss of crystals may limit your options later on.

Players use their airships to decide which actions they will perform on their turn, but one action placement directly affects each action placement afterward. At the beginning of the game, monument boards are placed in a random order. The order then determines each monument’s place in time. Your first action sets your timeline of actions in motion since you cannot go back in time to place a subsequent action on a board earlier in the timeline. If the fourth monument on the timeline has an action you’d really like to perform, just know that severely cripples your choices for the rest of that round.

There’s a lot going on in the game, and in terms of gameplay that’s a pretty good thing. There’s plenty to think about each turn, but the game’s greatest asset is also one of its greatest disadvantages. Once each player has placed all their zeppelins for the round, the entire game board is reset. Monument boards shift in time so the order changes. The new round mission, expedition, and upgrade cards replace the old ones. Crystal deposits are completely overhauled. Each round’s setup feels like setting up a completely new game. This is great in the sense that the game changes as you play it, forcing players to adapt new strategies for each turn. Still, it feels like you spend a substantial amount of time in game maintenance, especially when you consider the entire game is only 90 minutes.

In the end, Steam Time comes across as a bit convoluted. The setup and continuous supply management of the game can bog things down. The multitude of choices keeps the game fresh, but you can’t help but feel the game could be a little more streamlined. Still, the components are great and the ever-evolving nature of the game will keep it fresh. One’s enjoyment of the game will come down to deciding whether the payoff is worth the preparation.

Those willing to look past the long set up and anti-climatic goal will find a beautiful game that's ever-evolving. There's a lot to love if you're a fan of worker placement games though its not a streamlined as other titles.