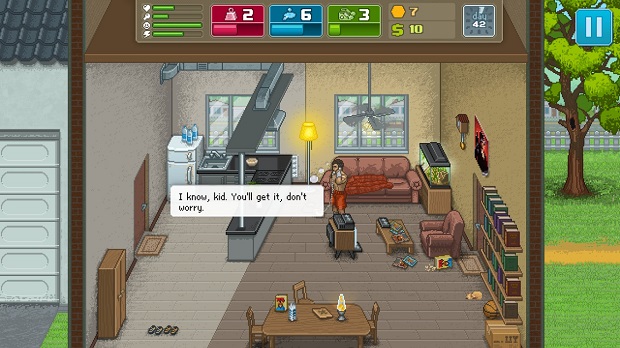 When I first heard about Punch Club, I thought it sounded pretty cool, but I wasn’t sure if I would enjoy playing it myself because I’m not much of a sports fan. However, for those like me who might be hesitant, it is more of a management game than an actual boxing title. You aren’t throwing any of the punches or kicks yourself; you’re just overseeing your fighter’s training and controlling the trajectory of his career.

Your character – I named him Franky Lou in my playthrough – loses his father in the beginning of the game, and with his dying breath he asks you to be strong and train hard to avenge him. Your life’s mission becomes training to be a professional fighter, reclaiming the medallion your father gave you when you were a child, and learning more about his involvement with it.

This game has a lot of quirky details and references mixed in that nostalgic fans will appreciate. For example, you can spot Jay and Silent Bob standing outside the local grocery store, and your character’s friend Mick has several movie costumes in his office, such as an Indiana Jones get-up. There’s even a whole crew of mutant ninja crocodiles to fight in the sewers.

Something about this seems familiar…

For a somewhat silly game loaded with pop culture references, there’s a lot of dark realism in Punch Club. For instance, one day Franky Lou found himself hungry and tired with only $2 to his name. If your hunger and energy bars are too low, you can’t train or work at your job, so he was stuck at a standstill. Desperate, I had him dig around in the trash cans outside the town bar, and he was able to find an old burger. It made some of his other stats go down, but it fed him well enough so he’d be able to return to work.

However, from humble beginnings can come great success. Soon he’d made acquaintances in the neighborhood and had his pick of what jobs he wanted to work on any given day. He’d also won his fair share of fights, earning some cash and honing his skills.

The skill trees in Punch Club are very well done. You start out spending a few points on basic skills, then as you work your way up you can choose what fighting style you want to focus on. Do you want to be a hard hitter, a fast mover, or a brick wall that takes forever to knock down? I chose the path of agility, and as I worked my way through the tree, the moves and perks I wanted progressively began to cost more points. Like in real life, if you want to acquire new skills, it takes a lot of practice.

Geez. No need to get all philosophical on me, Tyler. I’m just here to punch some guys.

Another thing that impressed me with its realism is the training system. Once you level up your strength or stamina, it doesn’t stay locked in automatically. At the end of each day, each bar degrades a little. Just like in real life, it’s imperative that you train every day. You can’t take a break midway through to do other things and expect to be at the same level of competency.

Different exercise equipment targets different stats, so you have to save up for certain pieces to place in your garage or pay the $10 gym fee to use their stuff. Your level of hunger or fatigue will determine how effective your workout is, but boredom also comes into play. After Franky Lou had been at the punching bag for quite a while, his interest began to wane, so that meant rotating him to another station or dealing with a half-assed workout.

As you might expect, it can be hard to figure out how to best manage your time. If you really want to build up your stats, you need to have a well-optimized routine. Once you’re able to get into a good rhythm, the game becomes surprisingly addictive and you don’t want to stop.

The closer you get to the end, however, the more the skill degradation really takes a toll. The game forces you to only focus on one stat per day; if you only do a little strength training during the day, you’ll ultimately lose more than you gained. On top of that, very few pieces of exercise equipment target only one skill, so rotating through them feels like a necessary evil. This makes the challenge of the game more irritating than absorbing.

Training with a buddy makes it more effective.

But all that said, overall it is an enjoyable experience. The story is simplistic but good, and there are some branching choices you are given. For instance, you can choose whether or not to stop a robbery at the grocery store, and that influences your relationship with the store owner, as well as decides whether or not you unlock a Steam achievement. There are also paths that lead to a broken arm, steroid sickness, and even landing your character in prison.

Along with branching choices, there are plenty of changes of scenery so the game doesn’t start to feel monotonous. There are several hot spots to visit in town, with secret locations to discover, and in the course of the story you get the chance to do a bit of traveling.

The open-ended conclusion practically begs for a sequel, and the “To be continued…” at the end of the credits seems to confirm it. What’s next in the saga of Franky Lou? Only time will tell.

Punch Club is a game with a lot of personality. From its realistic gameplay to the little surprises it has tucked away, there’s something special about it that will have you hooked. In spite of the moments that feel like a lot of grinding, it’s an enjoyable title.

Sarah Marchant is an office admin for a nerdy t-shirt company. She has a soft spot for indie games, a passion for story-driven titles, and a weakness for cooking games and anything with zombies.
Related Articles: Punch Club
Share
Tweet
Share
Submit