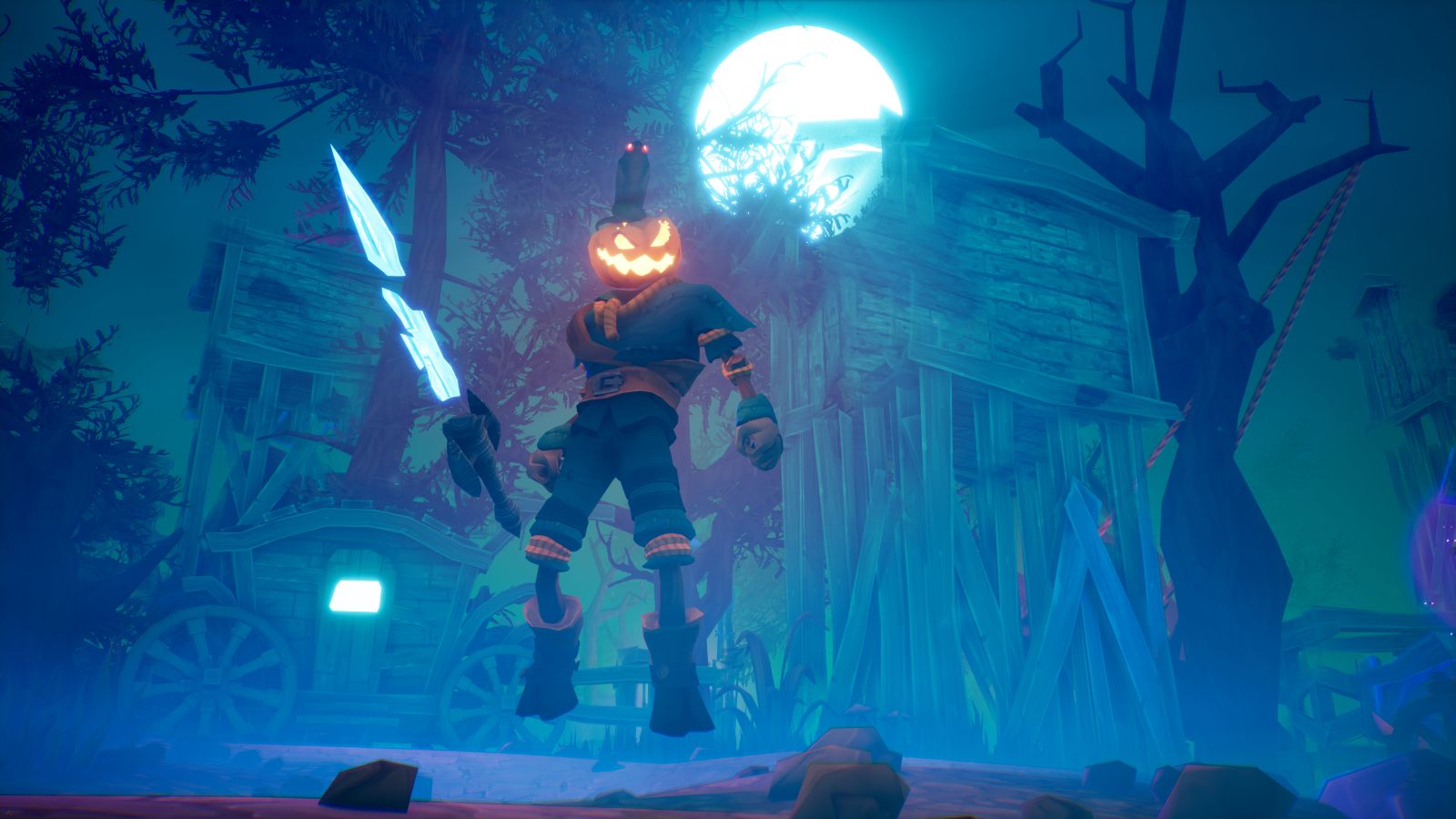 Pumpkin Jack: New-Gen Edition is a throwback to a bygone era. Reminiscent of PlayStation 2 classics, Pumpkin Jack feels like a game made 15 years ago, rather than a modern take on a once well trodden genre. That’s not to say that Pumpkin Jack is a bad game, rather it is an enjoyable adventure that may end up being overlooked by modern gamers, but those who embrace the nostalgia are in for a funny and well-crafted, albeit rather short, experience.

Our adventure begins in the Arc En Ceil Kingdom during an age of prosperity. For years, the kingdom had lived in peace. In fact, the kingdom had been peaceful for so long that life had become painfully boring. After years without conflict, the Devil himself grew bored and began to dream of bloodshed and pestilence. Finally, fed up, The Devil unleashed the curse of the eternal night, conjuring up grotesque monsters across the world. The humans, for so long content with their peace, couldn’t handle the monsters and thus called upon a champion to protect them – a mighty wizard. In retaliation the Devil called upon his own champion, Stingy Jack – a man feared throughout the centuries for his evil deeds and selfish ways. The Devil, not quite content to allow Jack to regain his full human form just yet, decided to cram Jack’s soul into a body conjoined to a pumpkin and offered him passage into the afterlife if he found the wizard and destroyed him. So off Jack went in search of the wizard and his freedom. 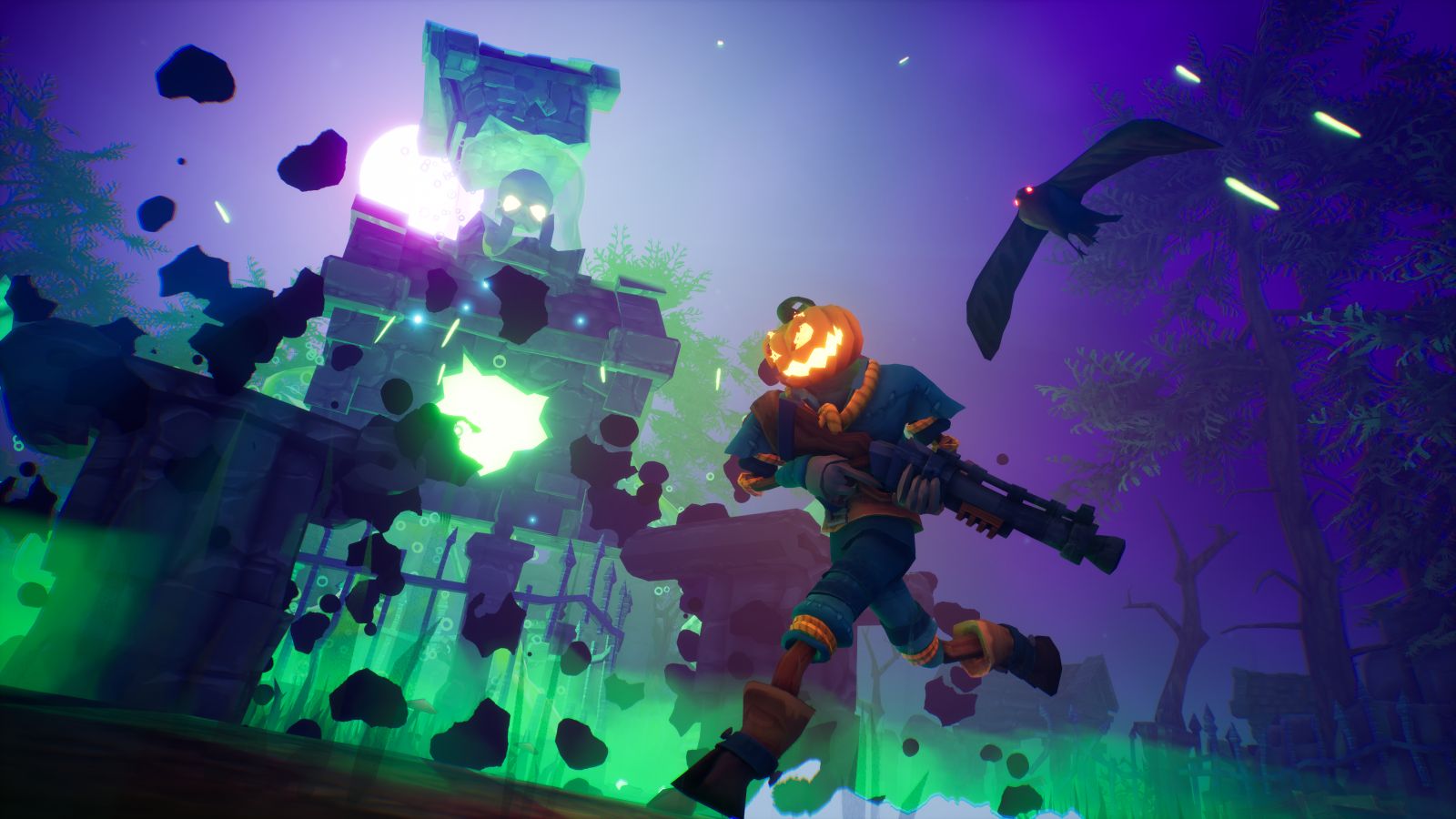 The story is basic, but enough to give you a reason for existing and, since you’re hot on the trail of a wizard, reason enough to visit a variety of locales. You’ll go from graveyards to the North Pole -where you’ll get to burn down Santa’s workshop. While there aren’t a ton of levels, there is quite a bit of variety between the locations – even if the levels themselves always follow the same basic pattern.

Pumpkin Jack is a throwback to the PS2 era and plays exactly how you’d expect. Levels are linear and involve quite a bit of platforming, a few simple puzzles to solve, lots of enemies to attack, a variety of on-rail sections, and then culminate in a boss fight which will grant you a new weapon to use during the next level. While predictable, that doesn’t equate to bad or even boring. I enjoyed the level designs, the boss fights, and even the on-rail sections. Really, the fighting was the only part that somewhat frustrated me.

Yes, fighting being frustrating in a game based around a ton of it is disconcerting, but the gripes I have never prevented me from progressing or caused me any untimely deaths, instead just caused annoyance. For the most part Jack can only melee, at least until later when he can wield a beefy shotgun, yet the enemies both melee and throw projectiles at you nonstop. You’ll have to get in close to take down enemies all while being pelted with projectiles and half the time you’re not sure which direction they are coming from or how you’re even being damaged. You can dodge and yes, if you move constantly you may make it through a few fights without being hit, but overall you’re going to lose an annoying amount of health by default due to so many enemies attacking and throwing items from so many directions that no amount of rolling will keep you safe. 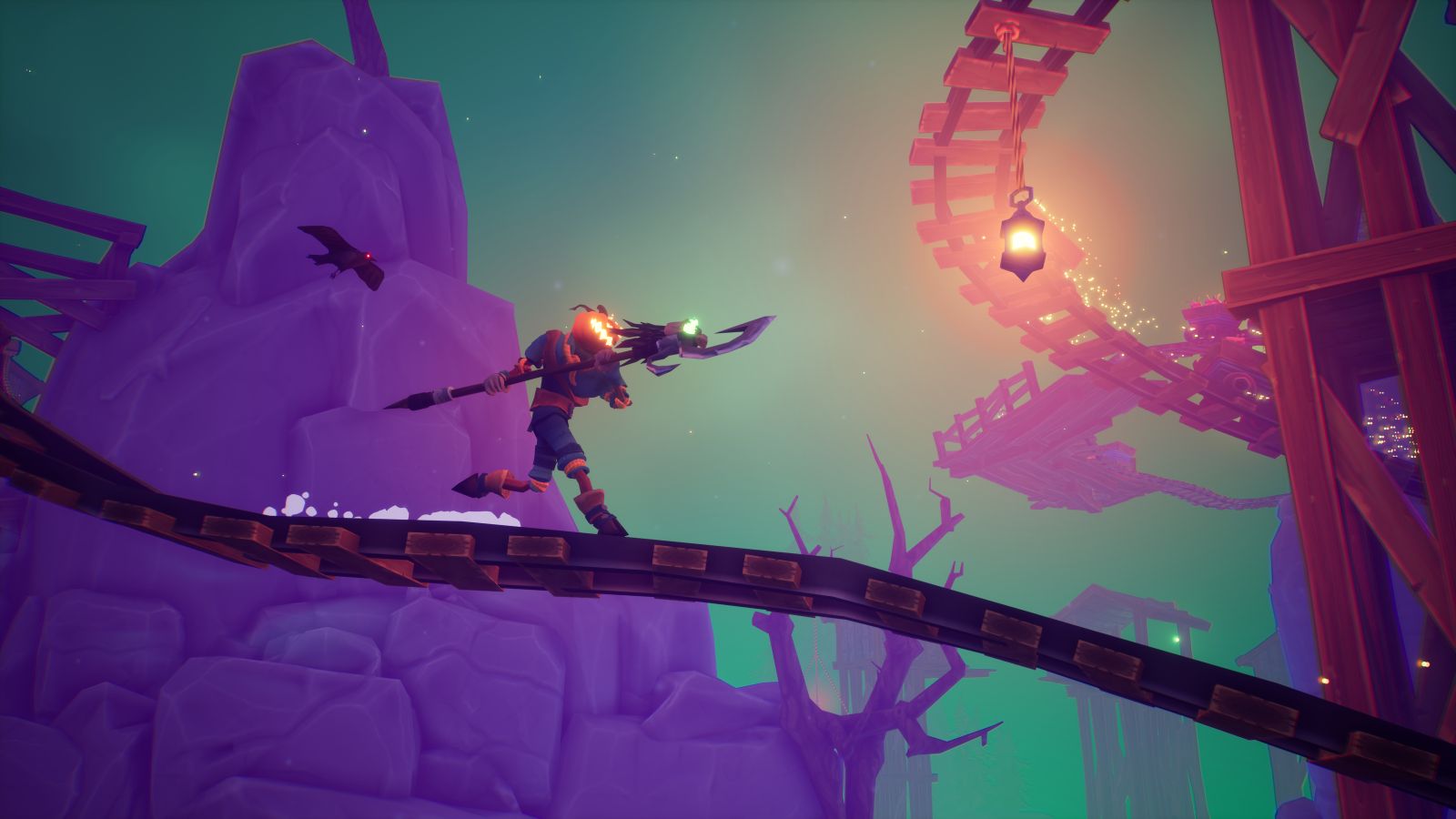 No matter how many weapons I obtained or how good I became at fighting, all fights still functioned basically the same. While new weapons may be a bit more powerful, there is no way to upgrade yourself or your weapons, so your best bet is to keep moving, attack nonstop, and hope for the best. Since the game is only four to five hours long, this repetition isn’t really offensive, as the game ends so quickly.

Despite levels using the same basic patterns, there is a ton of creativity on display, especially during the on-rails sections. Each level has Jack navigating through some sort of treacherous situation at high speed. Escaping a burning building, riding in a runaway mine cart, racing incompetent knights to a castle’s gate, falling through time and space, being dragged by a gargoyle, and riding a magic horse are just a few of the thrilling set pieces you’ll encounter.

Additionally, each level has a puzzle room or two where you must detach Jack’s head and send it into the room on its own to complete the goal. These rooms may have you matching names on headstones (be sure to take a moment to check out whose names appear on the headstones), rolling a bomb to a pile of ignitable barrels, playing memory games with light up plants, or throwing presents at Santa. Puzzle rooms do get progressively harder, but are never frustrating and offer a welcome change of pace from the basic level structure. 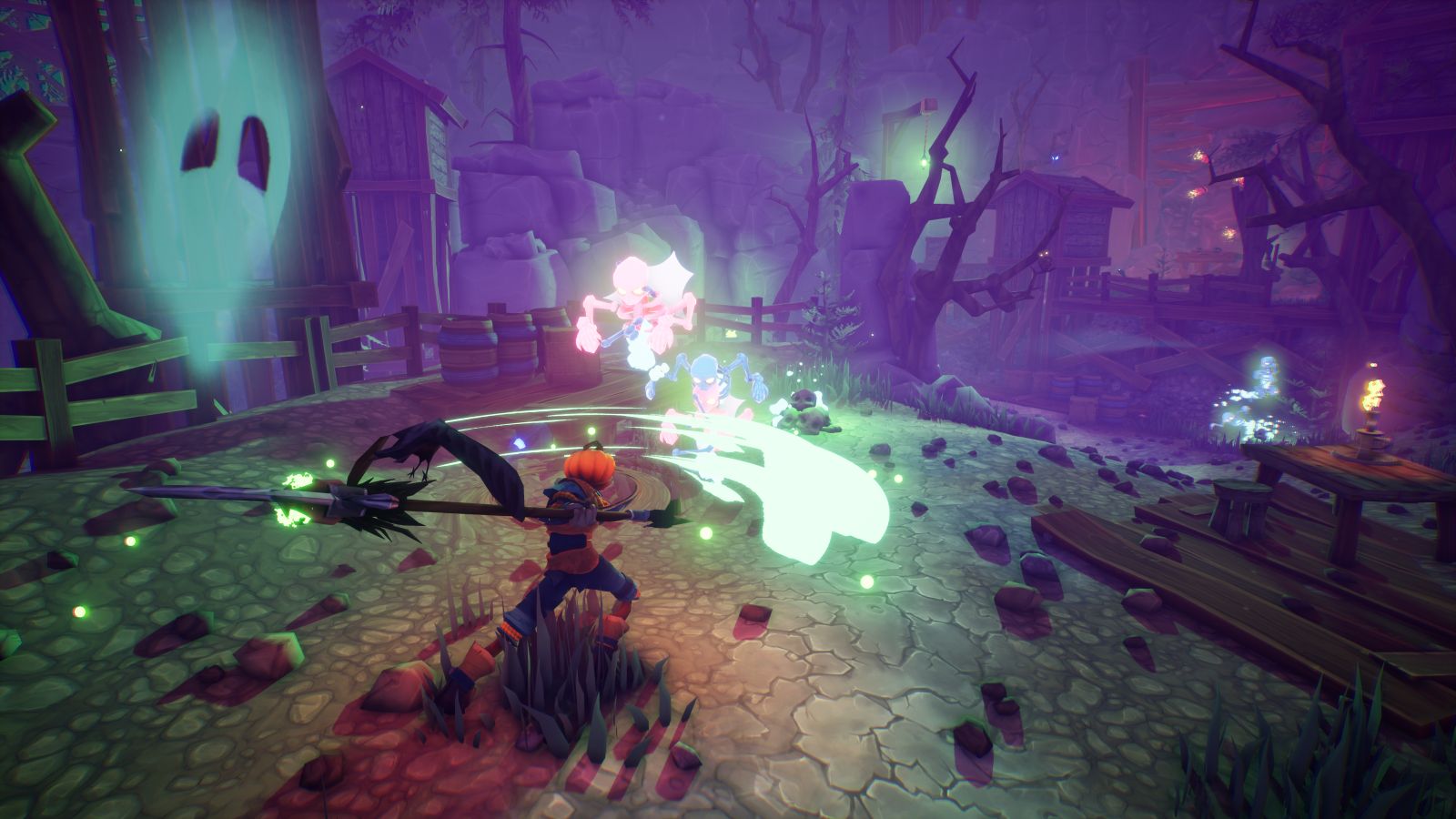 Boss fights are pattern based, but have enough variety to not become stale. Fights take place in three progressively difficult rounds, with more obstacles being thrown at you each time. Essentially your goal is to survive an onslaught of attacks until you have the chance to attack, and then repeat, with each round throwing more obstacles or enemies at you to destroy before confronting the boss. While on paper this sounds rather simple – and, well it is – these fights are still fun due to the variety between each level’s boss. A nasty scarecrow, a demented husband and wife team throwing potions at you from atop an eyeball infested tree, and a thrilling end boss that makes use of all your skills are just a couple of the fights you’ll encounter.

You’d expect a game named Pumpkin Jack to be humorous, and you’d be right. Jack is sort of a jerk, and spends most the game telling off everybody that he meets. A creepy merchant can be found in every level, and Jack constantly makes fun of him for following him around, but the best exchange between the two is their first meeting:

“I’m not here to hurt you sir.”
“Are you sure? You look like a monster to me. Rotten, half-dead, soulless…”
“Of course! I’m a salesman!”
“Ohhh…Well now I just want to kill you anyway.”

Scenes like this are scattered throughout, and keep the game lighthearted even during the more stressful set pieces. 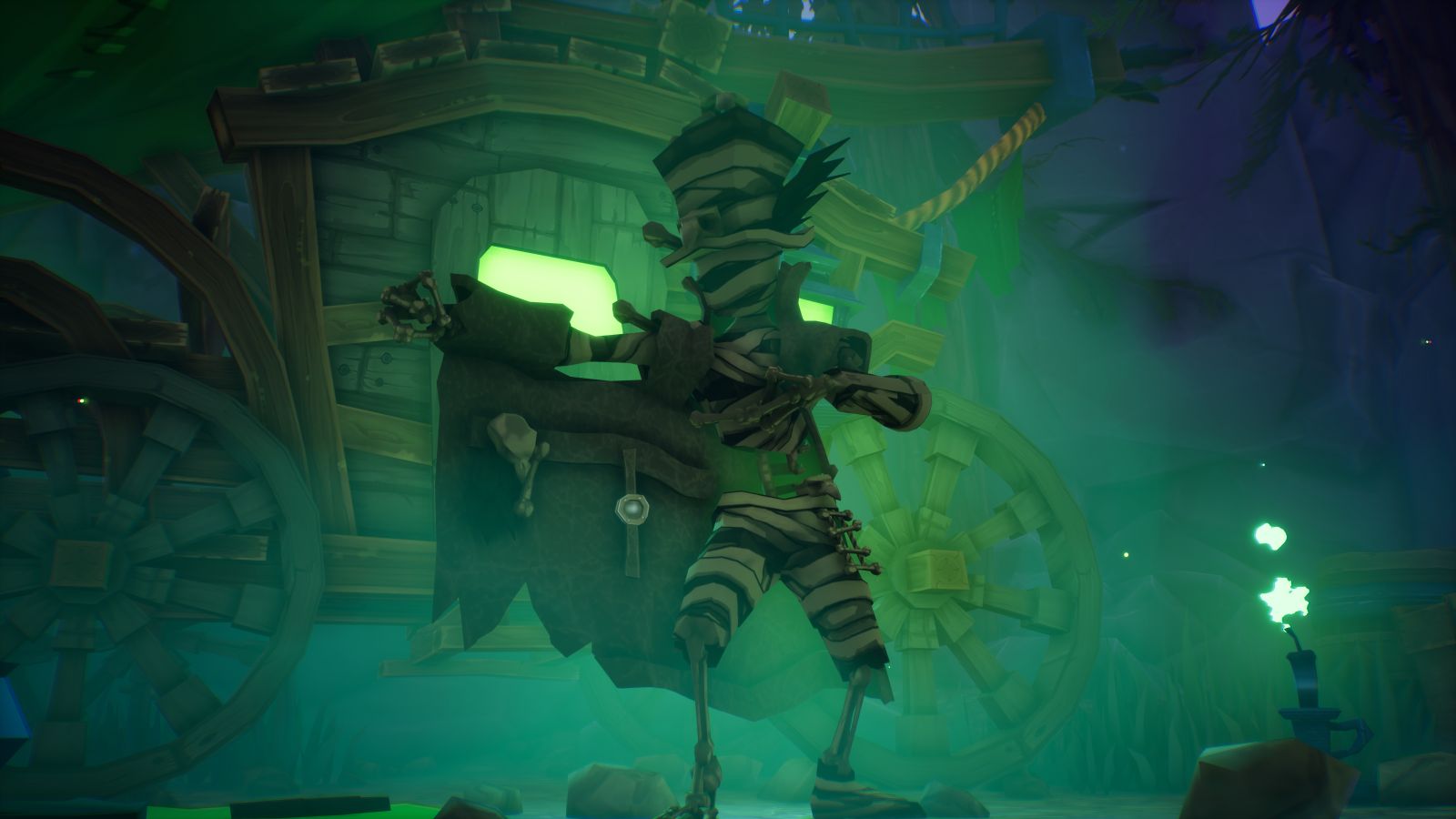 Jack is given a variety of weapons to assist him on his journey, with a new one being earned in each level. A shovel, magical sword, a destructive orb, axe, and a shotgun are just a few of the weapons available. Once you obtain a weapon you can use it at any time via a radial dial brought up by holding down R1 which allows you to swap weapons on the fly. I always stuck with the weapon earned from the previous boss while I ran through the next level so I could test out its abilities, but in no way are you hampered by the use of just one weapon at any point. In fact, it’s best to experiment with a variety of weapons based on the enemy or boss you are fighting.

Jack is accompanied on his journey by a wise owl and a cowardly crow. The owl serves as your mentor of sorts, explaining where you’re at, your goal, and providing tips on obstacles you may encounter. The crow, on the other hand, joins you early on in exchange for you taking down an evil scarecrow that had been terrorizing him and his crow buddies. The crow is essential to survival as he can be launched to attack far off enemies, knock down bridges, and destroy obstacles blocking your path during the on-rails sections. 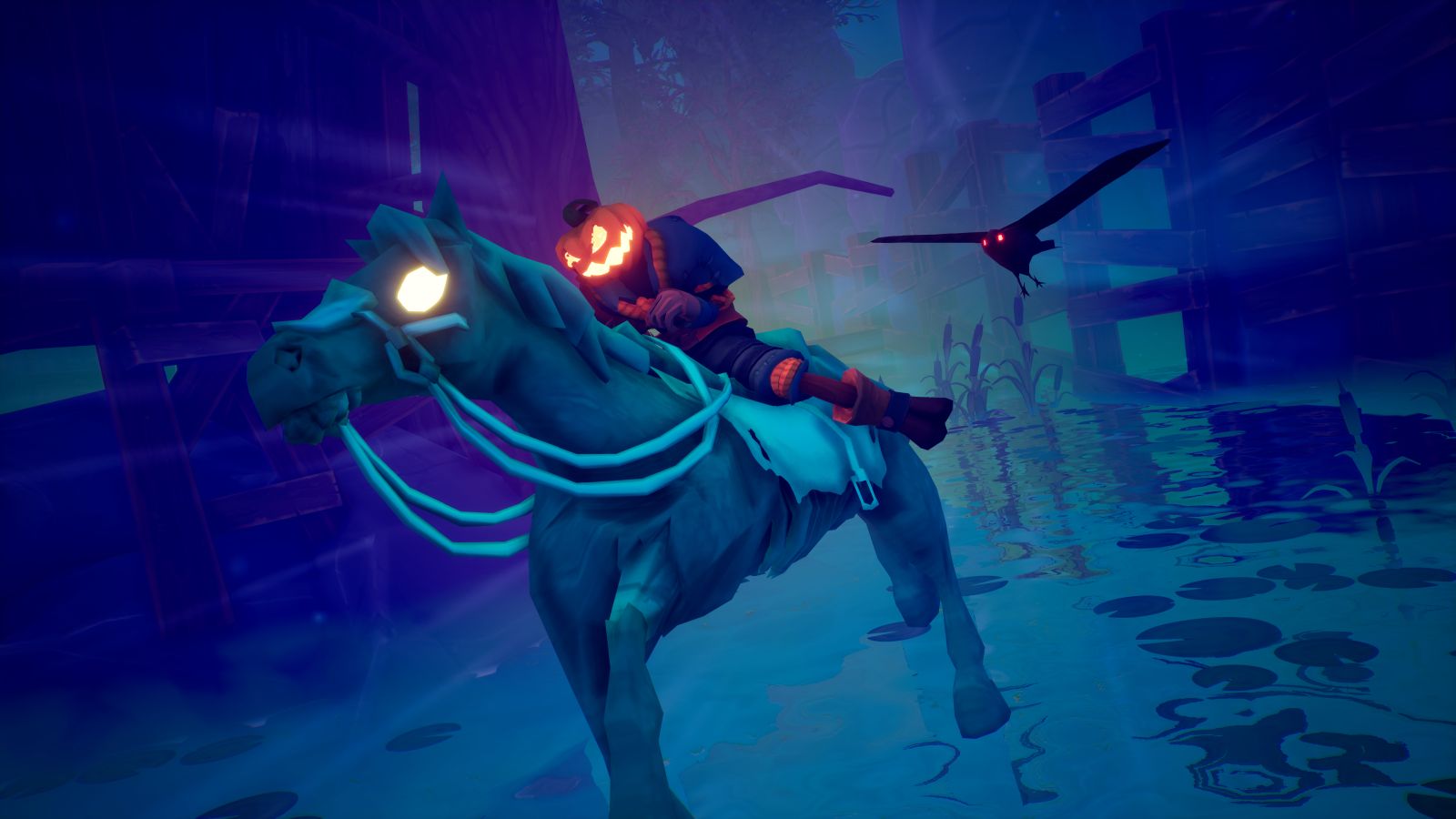 Pumpkin Jack is never that hard, but even if you do die, there is no real penalty other than having to repeat a minute or two of an area. There are cauldrons of stew scattered around each level which can be used to save your game and refill your health bar. If you are ever far from a stew – which is unlikely – you can simply destroy various objects throughout the level to regain your health. Not having to worry about replaying large chunks of a level due to a death helps keep the game light and allows for exploration.

There are 20 crow heads hidden throughout each level, which can then be used to purchase new skins from the previously mentioned creepy merchant. Reaching these crow skulls will sometimes require precise platforming or making giant leaps of faith – another reason why the generous save system is appreciated. Better yet, if you die immediately after reaching a crow’s head, it still counts as obtained even when you respawn, so there’s no need to go after it again. While the skins do nothing more aside from switching up your outfit, the skulls are a welcome addition to pad the game length, as you will almost certainly not reach all 20 on your first playthrough of each level.

Pumpkin Jack is a retro-inspired platformer that features a great sense of humor, creative boss fights, a variety of levels, a few interesting puzzles, and some inspired on-rails sections. While the combat can border on frustrating and the game can be completed in 4 or 5 hours, there is still a lot to love – especially if you are a fan of PS2 era platformers.

Richard Allen is a freelance writer and contributing editor for various publications. When not writing for Gaming Trend you can find him covering theatre for Broadway World, movies and TV for Fandomize, or working on original stories. An avid retro gamer, he is overly obsessed with Dragon's Lair. Chat with him via @thricetheartist on Twitter and @richardallenwrites on Facebook and Instagram.
Related Articles: Pumpkin Jack
Share
Tweet
Share
Submit