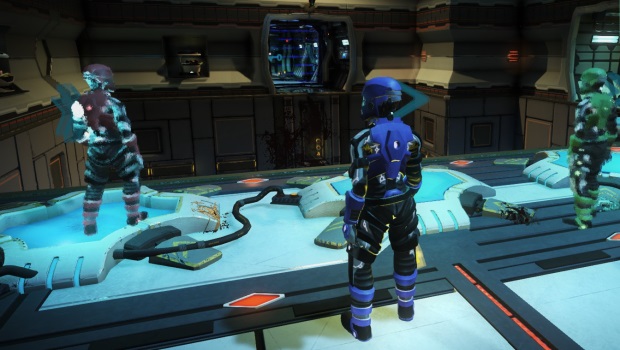 The indie gaming landscape has been absolutely sick with Portal-alikes as of late, each hoping their central navigation gimmick and idiosyncratic take on puzzle narrative can unseat the reigning champions. For some, perhaps their ambitions are not so grand, and they merely want to take advantage of the gaming public’s unending appetite for more of the same. Project Temporality likely falls somewhere in the middle of this spectrum—it is far too earnest to believe that it was ever conceived of as a shallow cash-in, yet not nearly sophisticated enough to imagine that it could have been anything but an also-ran.

Like most 3D puzzlers, Project Temporality relies on one central conceit to drive gameplay. In this case, it’s billed as time travel, but cloning would probably be a more accurate description of what occurs. The player character is given the ability to rewind time and then spawn a clone of themself which will precisely reproduce the original avatar’s actions that had just been reversed. This can be performed repeatedly in sequence, thereby creating multiple “timelines” of the player’s actions simultaneously. In practice, the procedure is more akin to programming than it is time travel, as most puzzles are solved by correctly ordering a number of clones to stand on switches in a correct sequence. Timing is, of course, a factor, although clones progress through the stages of puzzles in a fairly linear fashion, as clones cannot spawn more clones, and once a clone is committed they will always perform the same function unless erased from the timeline. In later levels, countdown switches, laser beams, and physical objects immune to time manipulation add complexity to the puzzles without drastically changing the method by which puzzles are approached and solved.

To be clear, Project Temporality’s puzzles are just that—puzzles. They serve no purpose as plot points nor do they fulfill any function aside to deliver the player to the next puzzle. The story, such as it is, revolves around a test subject completing trials to gather data on a new technology at the demands of a megalomaniacal commander/scientist who has no respect for human life. If that sounds a lot like it’s aping Portal, that’s because it is—although Project Temporality is not nearly as funny or well written. There is no voice acting, which may be a small mercy, as the written dialogue is at times cringe-worthy. Production value is otherwise middling. Defrost Games built a custom engine for the title, and it generally looks competent enough, but there seems to be only a handful of unique textures used throughout the game. Screens and signs are duplicated in what seems like every puzzle room, and every corridor in every level looks exactly like every other corridor in every other level.

Over the course of fourteen chapters, there is very little variation in Project Temporality’s core puzzle structure either. Essentially, find the switches that open the doors and place clones on them. The early chapters are a little touch-and-go as the tutorial is rather obtuse, but after that point there are only a handful of puzzles that present much difficulty. That’s not to say they are overly easy, either—Project Temporality’s difficulty curve is quite reasonable. It’s the sort of game to play when you’re feeling down on yourself for not being able to make it very far in Antichamber. Unfortunately this is largely due to an overall conceptual tepidity that runs rampant in Project Temporality, as the rote puzzle design lends itself neither to sudden flashes of insight nor awe-inspiring feats of lateral thinking. It’s a bit like playing a sliding tile game—you might feel satisfied with yourself for having completed it, but the pieces were always there and the solution always within reach, so it’s hardly a moment of great pride or intellectual excitement when it does all come together.

Project Temporality finds itself in a very specific niche. For devoted fans of puzzle games, it delivers about six hours of relaxed head-scratching to fill the void while waiting for the next big thing to arrive. For everyone else, however, the low-concept use of time travel and the paper-thin story will not likely be particularly satisfying, especially with such recent examples of how puzzle games can and should be done to which it can and will be compared. Project Temporality is not a bad first release for an unheard-of indie studio, but it is completely forgettable, and being forgettable in a genre consisting of some of the most memorable and inspirational video games ever made is a grave mistake indeed.

Project Temporality is not particularly original but it does provide a few leisurely hours of thoughtful time-clone puzzling. If you’ve already played all the excellent independent and AAA puzzle games of the past eight or so years, then Project Temporality may be the diversion you’re looking for while waiting for The Witness or Portal 3. Just don’t expect to see anything done that you haven’t already seen before.