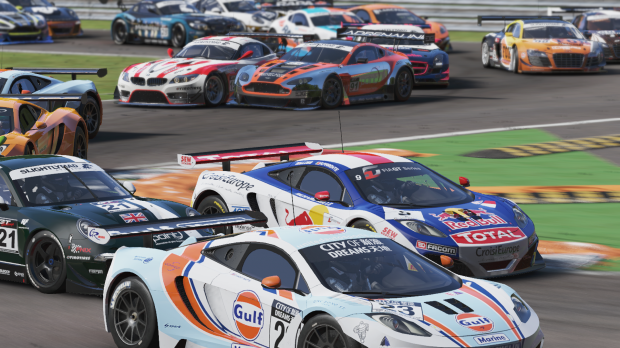 With all of the racing games that focus on huge car rosters, crashes, or “Drive-atars,” developer Slightly Mad Studios aims to shift the focus back on what automotive enthusiasts truly care about: cars.

Project CARS is a racing simulator that appropriately writes “CARS” in all caps, and sets itself apart by cutting the fat present in most other driving simulators to give cars the spotlight. To this end, the user interface is lean and minimalist, and the entire roster of vehicles can be driven without having to be unlocked (and you don’t need to pay a microtransaction either). The result is a driving simulator that concentrates on cars with a laser-focus.

Project CARS doesn’t have as many usable vehicles as other driving simulators have, but its roster of 65 cars is varied and meticulously crafted. Vehicles range from ordinary road cars to powerful racecars, and from rally cars to go-karts. For the first time in any racing game, the interior, handling, and even the sound of each vehicle is completely unique to each vehicle in Project CARS.

The handling of each car is particularly impeccable, handling exactly as they would in real life.  Open-wheel racing vehicles perform with precision and grace to expert drivers, but quickly become death traps for those unprepared to operate them. Go-karts are jerky, accelerate uncomfortably fast, and make comically ungraceful turns. Those who are fans of arcade racers will not feel at home, as gimmicks take a backseat to realism at every turn. Drifting, for example, is constantly present in many racing games but is a rarity in Project CARS.

The AI is equally realistic, and makes every attempt to avoid collisions. I noticed that, on several occasions, two vehicles in front of me would begin to drift towards one another but would realize this before colliding into one another and quickly change course. This isn’t infallible though; as is the case in real racing, the racers will sometimes slip up and crash, or nudge you a bit in an effort to get ahead. It feels more calculated than random though, and serves as another great touch aimed completely at creating a realistic driving experience.

The weather effects in Project CARS are a mixed bag in terms of quality. Some effects, like sunlight (or lack thereof for night effects) are incredibly well done. Sunlight will peek out over the tops of trees and put a glare in your eyes, and at nighttime, the roads are pitch black aside from your headlights. Other effects though, like rainfall, have been handled better in other driving simulators. Wet roads, in most driving simulators, tend to make roads more slippery and unpredictable, but I found this effect less prominent in Project CARS. Additionally, raindrops will land on your windshield, but the effects of the windshield wiping the rain away are fairly undetailed, and so just serve as more of a distraction than anything else.

Project CARS sounds great for the most part (although the engine noises can become irritating over time, as is the case in any racing game), but it does have some audio glitches. At times, the audio cuts out and becomes a tad distorted at times, which distracts somewhat from all of Projects CARS’ incredible strengths.

Multiplayer in Project CARS is smooth, and stable, but not much different from playing with AI. The only distinguishable difference for me was that I suffered humiliating defeat each match to hordes of better drivers. Matchmaking also failed for me in several instances, which is never a pleasant experience.

I should also warn that Project CARS is not for everyone. I tend to be a fan of over-the-top racing games and action-packed automotive collisions, and to this end, a game so focused around realism can be off-putting or downright boring at times. However, Project CARS does everything it aims to do extremely well, and shouldn’t be faulted for having a niche audience. If you couldn’t care less how a racecar handles differently from a go-kart then stay far, far away.

Project CARS is a meticulously-crafted love letter to automobiles. Developer Slightly Mad Studios has put driving cars front and center, and created a simulator that is one of the most realistic than any game to-date. Project CARS certainly isn’t for everyone, but it cuts out a lot of fat that is prominent in driving simulators and gives players pure, unhindered cars.

You know that jerk online that relentlessly trash talks you after every kill? That guy was probably Travis "Tie Guy" Northup. Competitive, snarky, and constantly wearing a tie, Travis has been writing his opinions about electronic media since he was a teenager, and is pretty much the only person to hold his opinions in high regard.
Related Articles: Project Cars
Share
Tweet
Share
Submit