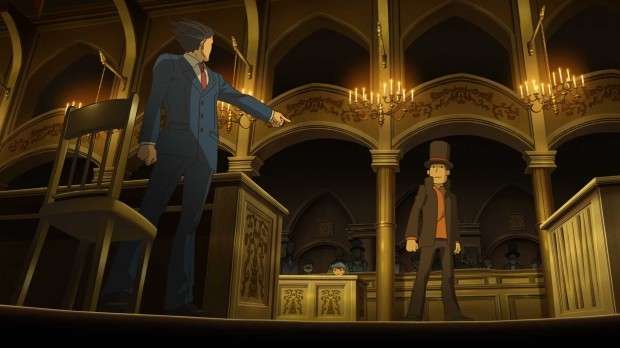 The game begins with Layton and Wright operating in their very different lifestyles until they are brought together by a curious series of events that transports them to the world of Labyrinthia. Together, the pair attempt to unravel the strange and magical land’s secrets in a series of Layton-style puzzles and exploration and Wright-style courtroom brawls. The story twists and turns in all the familiar ways you’d expect from either the Layton or Wright series, and is very well-written…well, until the end anyway. Without spoiling anything, I’ll say that the story takes a very unexpected turn at the end that I found laughable, but it wasn’t enough to damper my experience in a major way.

One of the best elements of Professor Layton vs Phoenix Wright: Ace Attorney is that it looks and sounds incredible. The voice acting, while scarce, is surprisingly well done, and the score is one of the best I’ve heard in a long while. It combines the familiar stringed instrumentals of the Layton series with the fast-paced Ace Attorney tunes to create a very original and excellent sound. The graphics lean more towards the Layton-style with simple water-colored imagery that provides the simple, yet beautiful imagery Layton fans will recognize. Unfortunately, Phoenix Wright fans will have to deal with a less-detailed Phoenix Wright and Maya, and dull animations during interrogations.

Professor Layton vs Phoenix Wright: Ace Attorney plays as fans might expect, with different sections of Layton-style investigation and Ace Attorney trials amounting to a ton of reading in between puzzles. The game ends up being 90% pressing the A button, but that’s not a bad thing if you’re voluntarily playing a combination of two games that have you reading dialogue for most of the game. Aside from fresh puzzles on the Layton side of things there are no real game-changing mechanics, but the Ace Attorney trials have one major element that changes things up significantly: Multi-witness interrogations.

For the first time, Phoenix Wright must interrogate multiple witnesses at once, which adds a new element to finding contradictions. Now, not only can you use evidence to point out flaws in logic, but also reference other witnesses that are at the stand. It’s an interesting aspect that can be annoying at times (due to all of the conflicting stories), but adds a welcome change to a proven formula.

While the gameplay in Professor Layton vs Phoenix Wright: Ace Attorney consists of each series’ respective experiences, neither feels like the full experience fans would expect from each of the series on their own. The Layton-style puzzles are dumbed down to the point of being overly simple and even boring at times, while the Ace Attorney courtroom battles are shorter and more straight-forward than fans will be used to. Even more disappointing is that these two styles never truly crossover, but rather are separated by different chapters where you play one or the other. I don’t know how a hybrid of the two styles would look, but it feels like a missed opportunity to create an entirely new experience using the best of each game.

Professor Layton vs. Phoenix Wright: Ace Attorney is a