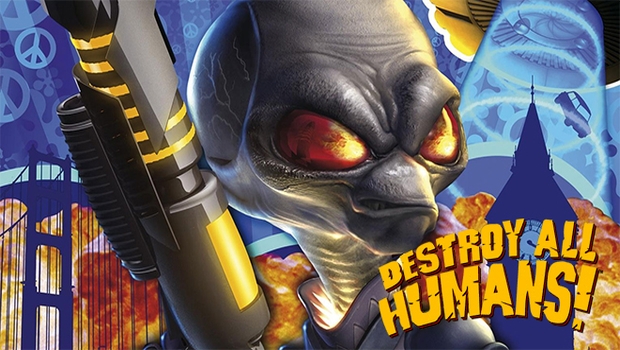 When Nordic Games snapped up the vast majority of the intellectual properties THQ left in the wake of its implosion, I never would have imagined that a PS4 version of Destroy All Humans! was going to emerge from that process. An action/adventure from the PS2 era, the game was a lot of fun for its time, but could it hold up on a modern console?

Destroy All Humans! was originally released in 2005. The main character, a sarcastic little gray alien named Cryptosporidium 137, or Crypto for short, has landed on Earth in Cold War era 1959 with a mission to rescue a fellow alien from the U.S. Army. Using his best Jack Nicholson impression, he proceeds to snarkily probe, control, and terrorize the citizenry. It’s all mayhem and chaos, and I remember it with a good bit of nostalgia.

The story, beyond the rescue mission, is fairly straightforward. Crypto’s race, the Furions, are unable to reproduce, instead relying on cloning technology, and one of their clones has been shot down. Crypto is charged with freeing his pal Cryptosporidium 136, and while he’s there, pick up pure strands of Furion genetic material. It turns out that the Furions have been using Earth as “shore leave”, depositing their DNA within the bodies of unsuspecting humans. It’s now up to Crypto to collect this DNA, and how better to do so than to extract brain stems from their squishy skulls?

Attention humans! We are here to abduct your bovoid species.

At its core, Destroy All Humans! is the sort of sandbox original developer Pandemic was known for. It’s not exactly open world, instead separating the action into six distinct locations. The game starts off in Turnipseed Farm in the Midwest, proceeds through Rockwell in North Dakota, heads to Santa Modesta (essentially Santa Monica), takes a left turn at Area 42, bounces through Union Town, and lands squarely at Capital City — a parody of Washington D.C. In all, there are a little over 20 main missions and a handful of side missions over six areas of gameplay. The side missions are fairly one-note, but are also a good source of DNA, rounding out the roughly 10 hours of gameplay on tap in this $19.99-priced remake.

The Zap-O-Matic, Ion Detonator, and a Disintegrator Ray round out Crypto’s ground arsenal, each having three upgrades purchasable with collected DNA. Beyond his weapons, Crypto also has Psychokinetic powers including Brain Scan (see what humans are thinking), Brain Extraction, Hypnosis (implant thoughts in human brains), Holobob (impersonate and control a human), and Psychokinesis (throw objects with your mind), with only the latter being able to be upgraded. The final weapon in the toolkit is the Anal Probe. Zapping humans briefly causes them to run away holding their butts in pain, but prolonged use causes their head to explode. It’s a bit messy, but it makes DNA collection easier.

The best part of this game is the wanton destruction.

Taking to the sky, Crypto’s signature flying saucer is all about the wanton destruction. Sporting a Death Ray that fires a rechargeable beam, a Sonic Boom that explosively tosses vehicles and humans into nearby buildings, and the Quantum Deconstructor which lobs miniature nuclear weapons with predictable results. Each of these has two very expensive upgrades which increase ammo capacity, recharge rate, range, or damage, predictably. The final weapon is called the Abducto Beam. Straight from any 50’s era Sci-Fi movie, this is the beam that allows you to pick up humans, cows, tanks, and other objects and throw them around. It’s not really a weapon, per se, but it does get heavy use flinging tanks off the map.

One main complaint I had with Destroy All Humans! was that the gameplay quickly becomes repetitive. The gameplay loop becomes apparent when Crypto is on the ground as the AI doesn’t know what to do with you other than run towards you, away from you, or shoot at you. Thankfully, the saucer gameplay somewhat makes up for some deficiency in the ground game, granting you a kaiju-esque rampage through the city as you destroy nearly every structure, vehicle, and object in the environment. After a while, however, even that becomes repetitive, making the 10 hour runtime feel a little stretched.

As you might imagine from a game ported from 2005, Destroy All Humans hasn’t aged well. As the game boots, you get the telltale PS2 sound and logo, and all references to saves mention cards in ports — an artifact of that era. Muddy textures, pop-in, and objects so blocky you can literally count the polygons are all present and accounted for. Despite the order of magnitudes of difference in processing power, I was shocked to see slowdown in some areas, though this was thankfully infrequent. While the game was billed as a remaster early on, the graphical quality and technical hitches makes it more of a port (or even an emulation), more in line with some of the classic games available on the PlayStation store already, albeit at a lower price.

If there is one area that continues to shine however, it’s Pandemic’s writing. The 50s era was rife with McCarthyism — the subversive (and often unsubstantiated) “Red Scare” anti-communist campaign lead by Senator Joseph McCarthy where Americans were led to believe that Russian operatives were around every corner. Crypto uses this madness to his advantage, capitalizing on the paranoia of the vox populi to sow his own chaos and lay the blame on “those damned Soviets”. To that end, much of the fun and humor comes from simply running around town and reading the crazy ideas in people’s heads. One lady believes that the sexiest word in the English language is “Tupperware”, and who am I to argue?

The voice acting is rock solid, with excellent writing.

Coupled with the tongue-in-cheek writing is an awesome voice cast to deliver it. Voice veteran Grant Albrecht does a great job as Crypto, and Invader Zim’s own Richard Steven Horvitz voices Orthopox, the Furion leader. André Sogliuzzo, Fred Tatasciore, Jim Ward, John Cygan, Nika Futterman, and other familiar voice actors round out the list of amazing talent on tap here. Sure the game tries too hard at times, and some of the lines elicit groans just as often as guffaws, but overall it’s more hit than miss.

A straight port from 2005, Destroy All Humans! is not pretty to look at, but the writing has held up well over the last decade. That said, nostalgia can’t fix the repetitive gameplay of Destroy All Humans!, and technical glitches mar the fun on tap. If you want a trip down memory lane, you might catch this on a sale, but it’s hardly a must-have in its current technical state and price point.

Ron Burke is the Editor in Chief for Gaming Trend. Currently living in Fort Worth, Texas, Ron is an old-school gamer who enjoys CRPGs, action/adventure, platformers, music games, and has recently gotten into tabletop gaming. Ron is also a fourth degree black belt, with a Master's rank in Matsumura Seito Shōrin-ryū, Moo Duk Kwan Tang Soo Do, Universal Tang Soo Do Alliance, and International Tang Soo Do Federation. He also holds ranks in several other styles in his search to be a well-rounded fighter. Ron has been married to Gaming Trend Editor, Laura Burke, for 21 years. They have three dogs - Pazuzu (Irish Terrier), Atë, and Calliope (both Australian Kelpie/Pit Bull mixes).
Related Articles: Destroy All Humans!
Share
Tweet
Share
Submit