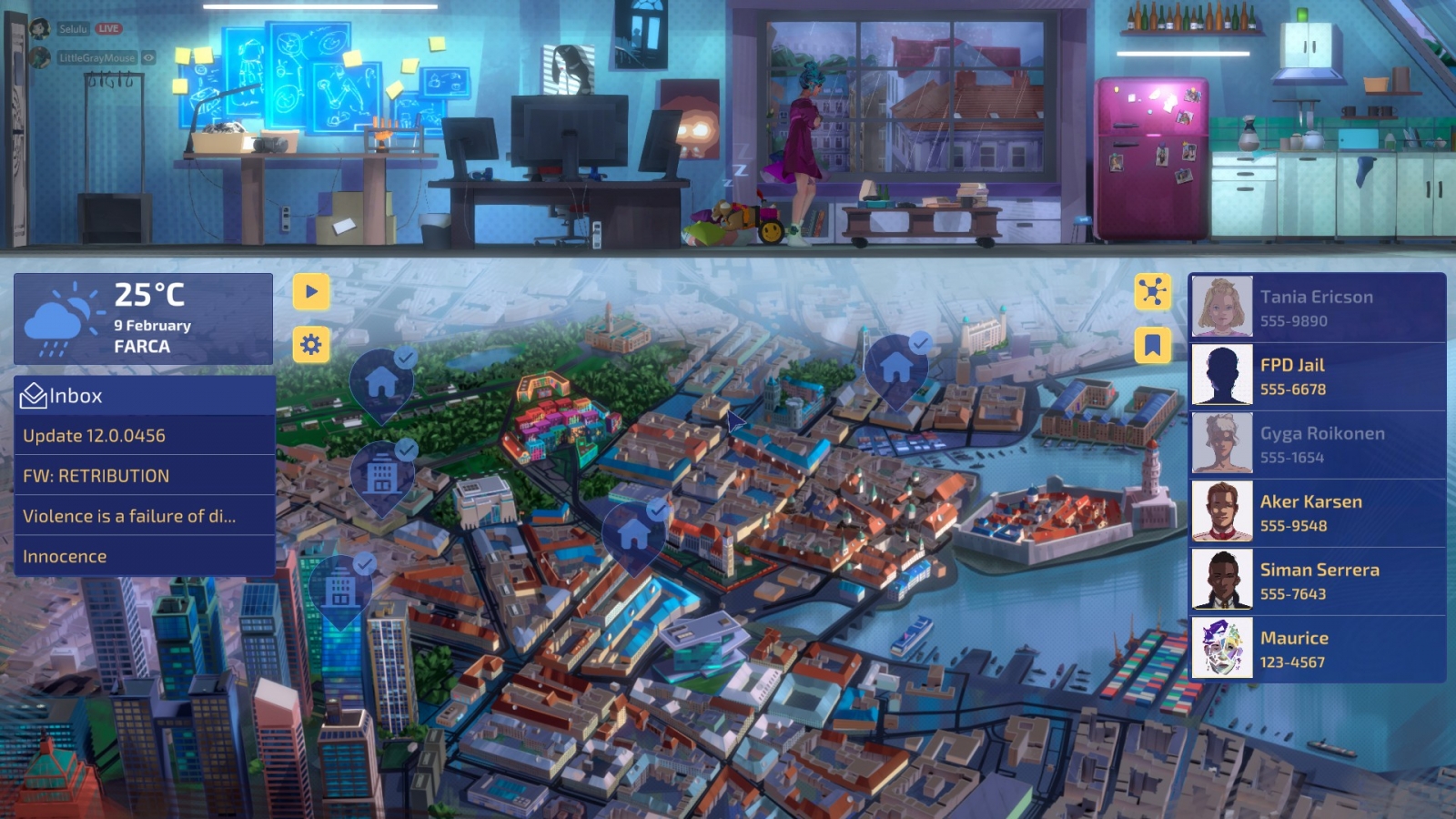 In the not too distant future, the island nation of Farca has become a surveillance state controlled by corporations. Isabella Song is a private investigator just trying to make rent, but there’s one big problem: she’s under house arrest. Thankfully, she’s an excellent hacker with an army of drones at her disposal. What she’s doing to solve cases might not be exactly legal, but you gotta make ends meet right?

Song of Farca is an adventure game structured like a crime procedural. There are quite a few cases you’ll tackle over the course of the adventure, from finding a lost robot dog to stopping a terrorist attack. Since you can’t leave your apartment and investigate, you’ll do everything from the comfort of your computer chair by hacking into the cameras littered everywhere or simply calling people involved in the case. The computer screen takes up the lower two thirds of the screen, while the apartment view is at the top, and for a touch of realism you can’t move your cursor while Izy isn’t sitting at her desktop. It’s a neat concept, but isn’t really utilized to the fullest. The most that happens on the top screen are ads being projected through your window or watching your dog hang out. I was half expecting a jump scare to happen at some point, but you can mostly just ignore the apartment view unless you can’t move the cursor.

Instead, the bottom screen is where all the action takes place. Your main view shows a map of Farca, and you can click on map pins to hack into the cameras of that location and begin investigating. This mode is pretty simple: you click on cameras to activate them and move them around so you can click on evidence to add to your case board. You’ll often have to solve puzzles, usually in the form of a four number password, using clues found around the area to serve as hints. For the most part, these were fairly fun to solve and give you some insight into the inhabitants’ lives and what’s important to them, but they can occasionally get very obtuse. I have no shame in saying for those ridiculous puzzles like with the deer head I had to look up the solution and reverse engineer it from there. These instances are more common in the latter half of the game, but there are still some more sane puzzles sprinkled in there.

Aside from number puzzles, there are a few seldom used hacking minigames. Sometimes, when you need to hack into someone’s PC, you’ll have to do that word minigame ripped straight out of Fallout in which you need to choose the right word from a jumbled list of characters. I’m not entirely sure why this is here, I counted exactly three times it appeared over the course of the game’s 11 hours, especially as it’s… not very fun, even in Fallout. The final minigame sees you combing through a video file and determining what important details look like in the pixelated distance. This was mostly a trial and error sequence, as most of the time you have no idea what a person’s face or logo would look like so you randomly choose from the three options and hope you’re right. The final time you do this though gives you everything you need in your case board, which shows the real potential this minigame could have had, even if it only makes you feel clever by allowing you to look up the answers within the game. 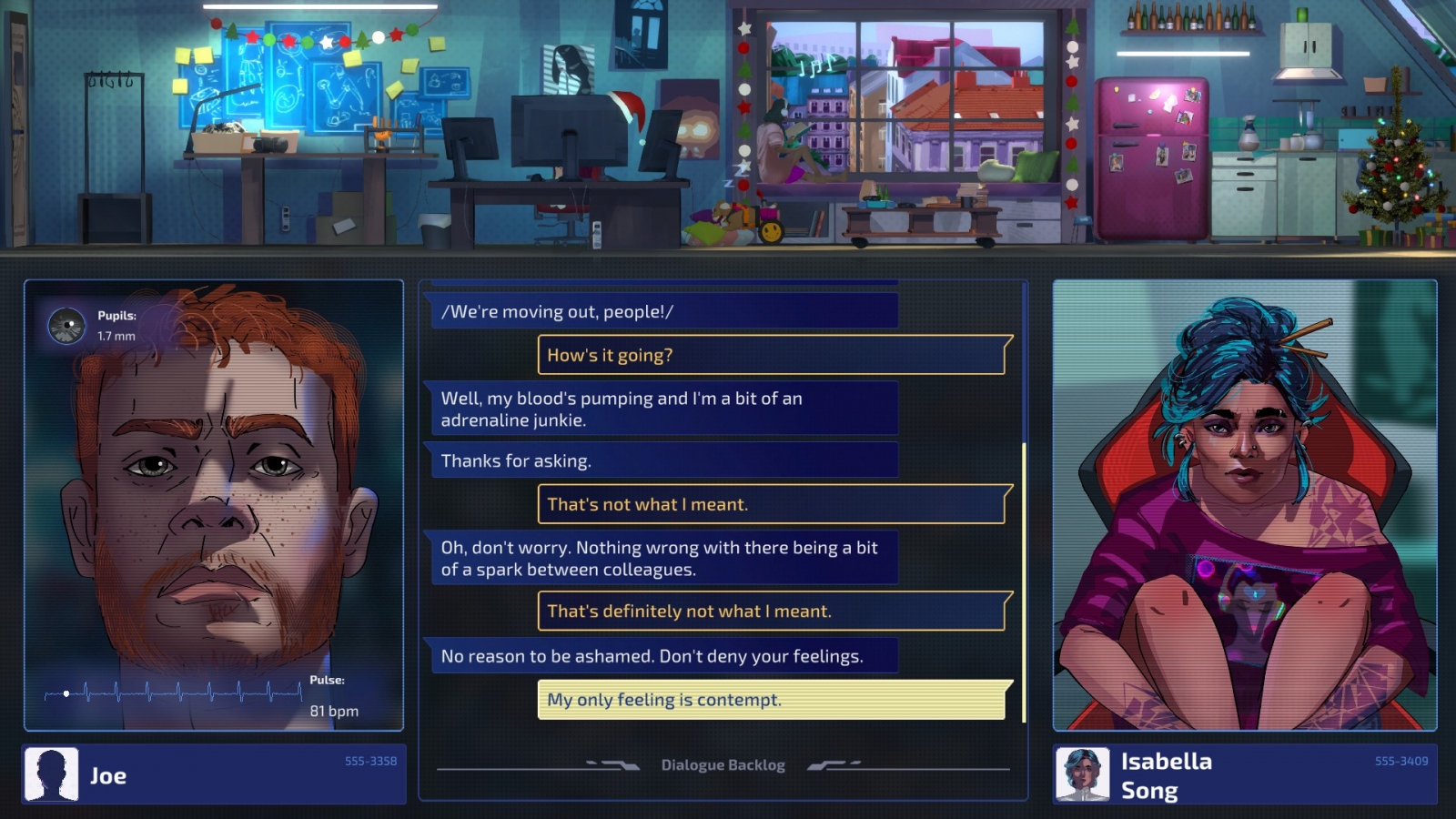 The case board itself allows you to further investigate individuals, events, and objects. Once you know a person’s name, for example, you can look them up to find even more information about them such as a photo, their pronouns, and recent news articles or social media posts. You add relevant information to your case board simply by clicking on yellow highlighted text, but this simple interaction still makes you feel like an expert hacker.

All the illicitly acquired information in the world is useless if you can’t use it, which is where video calls come in. To the right of your map lies a list of contacts you can call at any time. You can call your personal AI Maurice to do autopsies or parse clues, ask for some favors from your police contacts, or interrogate your suspect and get a confession. These interactions take the form of text conversations, in which you can choose dialogue options or present evidence on certain statements similar to the Ace Attorney series. And just like that series, it’s overall very fun but with a few moments of leaps in logic that would be difficult to guess without using everything on everything else. Still, these calls are probably the most interesting part of the game, especially since your choices matter with people remembering how you interacted with them all the way until the end of the game. I only played through once, but I’m eager to go again to see what changes. 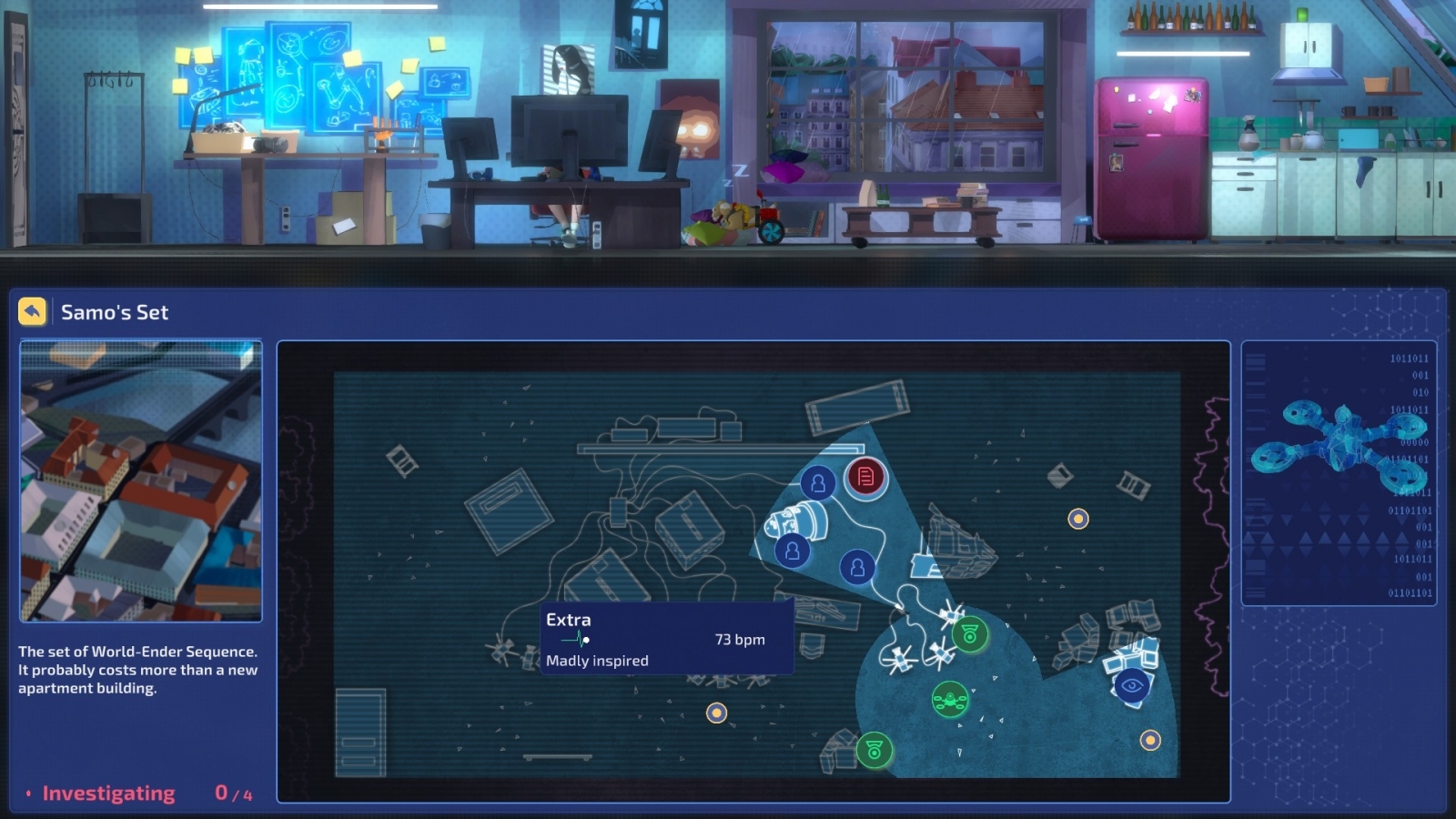 I will be waiting for that second playthrough though, as the game is incredibly glitchy. Many of the location investigation sections involve timing puzzles; where you need to activate certain objects in the right order to get people to move. These puzzles can break very, very easily, in fact the only reason I was able to finish the game was because I sent my save to the developers who reset the room I was working on. If the Steam discussion boards are any indication, many people have had this problem, with NPCs refusing to move, in locations throughout the game. This could have easily been worked around with a case select from the main menu, but that’s only unlocked once you beat the game so your only option is to either restart the entire game or wait for a patch.

I would recommend those interested to wait for a patch in this case before diving in. The game is great, especially when playing with someone else to help you work through the case, but those potential game breaking bugs would wipe out all the choices made up to that point if you choose to start over which would lessen the impact since you’d know what the “best” options are. Song of Farca is a very good game, but it needs some more time in the oven before it’s truly ready.

Song of Farca is a great adventure game with some neat, cyberpunk twists. Each case will leave you wondering if you made the right choices until the credits roll. Before you meet the game’s well written cast of characters though, check if the game breaking glitches have been fixed.

David is the kind of person to wear his heart on his sleeve. He can find positives in anything, like this is a person who loved Star Fox Zero to death. You’ll see him playing all kinds of games: AAAs, Indies, game jam games, games of all genres, and writing about them! Here. On this website. When not writing or playing games, you can find David making music, games, or enjoying a good book. David’s favorite games include NieR: Automata, Mother 3, and Gravity Rush.
Related Articles: Indies, Song of Farca
Share
Tweet
Share
Submit