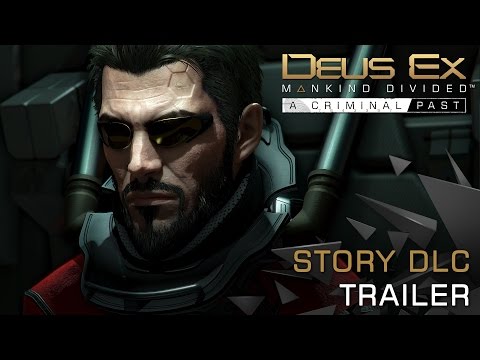 By the time you beat Deus Ex: Mankind Divided (our review), protagonist Adam Jensen is all but invincible courtesy of a vast array of devastating augments. Not unlike Superman, at this stage of the story, the only thing you can do is strip him of his powers. The recently-released DLC, entitled A Criminal Past, does exactly that as it locks up the protagonist at the Penly T. Housefather Correctional Facility. Welcome to “The Penthouse” – a prison built specifically to contain augmented people.

After the end of the events in Mankind Divided, Jensen is talking to Dr. Delara Auzenne – Task Force 29’s Criminal Psychologist at their offices in Prague. Jensen is recapping his first undercover job some six months ago — an infiltration into the Housefather Correctional Facility. His mission was to find another undercover agent to find out more about a terrorist attack.

My favorite parts of Deus Ex: Mankind Divided were the ones where the narrative took center stage and the action subsided. These slow moments where Jensen uses his stealth and his wits to solve problems is where the series has always shined brightest. A Criminal Past focuses hard on these moments because Jensen has little choice. Being in prison, all of Jensen’s fancy weaponry remains safely outside of reach, and thanks to an implant, his powers are disabled. It strips the game to its core, making you focus on tactics and stealth without resorting to gadgets and gear.

The best way to demonstrate this comes in the first mission. Jensen is sporting a red jumpsuit (complete with Hannibal Lecter-esque neck collar mantrap) and locked away in his cell block. Naturally, he needs to reach the adjacent cell block, and that means using coercive conversation, stealth, or old fashioned vent exploration. Since the inmates in the next cell block wear yellow, you’ll need to pick up a wardrobe change as well. Mixing and matching approaches is on display here, creating tense moments that you can’t just activate a gadget to avoid. If you felt like Deus Ex: Mankind Divided was too combat focused, this should be a real treat.

Jensen is still a smartass.

That said, there’s plenty of opportunity to mix it up here. Naturally, the situation in the prison deteriorates and Jensen is right in the middle of it. Having to work for your power restoration, procure weapons, and engage in hand-to-hand combat feels more earned than granted, making Criminal Past’s standalone mission structure feel better balanced than the root product.

It’s not all roses with Criminal Past. The dialogue is a bit of a mixed bag with some of the ‘tough guy’ dialogue coming in a little stiff and hackneyed, but there’s an element that redeemed it nicely. As you play the level, occasionally Adam and Dr. Auzenne talk about the approach you are taking, or the outcome of those actions. If you die, the Doc calls you out on that with a “Well you didn’t die, Adam, so what really happened?” The occasional narrative break-in reminded me of some of the best parts of the King’s Quest series.

During my time with the expansion I ran into a few technical hitches. Sometimes AI patrol routes would become stuck, making moments that should have been difficult a cake walk. I also had three crashes to desktop.

All in, A Criminal Past rings in at about five hours of game time. That sounds like it could be a bit short, but it doesn’t overstay its welcome. While the main game ends on an obvious cliffhanger, Criminal Past spells the final DLC for Mankind Divided. While I wish it was a solid wrap-up that would eventually lead to another installment in the series, instead it’ll be a solid swan song.

A Criminal Past puts Adam in jail for a great self-contained storyline pushing a solid narrative and a far greater emphasis on stealth in the final DLC for Deus Ex: Mankind Divided. While the voice acting can be a bit of a mixed bag, there’s no doubt that Eidos Montreal is ending this one on a high note.

Ron Burke is the Editor in Chief for Gaming Trend. Currently living in Fort Worth, Texas, Ron is an old-school gamer who enjoys CRPGs, action/adventure, platformers, music games, and has recently gotten into tabletop gaming. Ron is also a fourth degree black belt, with a Master's rank in Matsumura Seito Shōrin-ryū, Moo Duk Kwan Tang Soo Do, Universal Tang Soo Do Alliance, and International Tang Soo Do Federation. He also holds ranks in several other styles in his search to be a well-rounded fighter. Ron has been married to Gaming Trend Editor, Laura Burke, for 21 years. They have three dogs - Pazuzu (Irish Terrier), Atë, and Calliope (both Australian Kelpie/Pit Bull mixes).
Related Articles: Deus Ex: Mankind Divided - A Criminal Past
Share
Tweet
Share
Submit