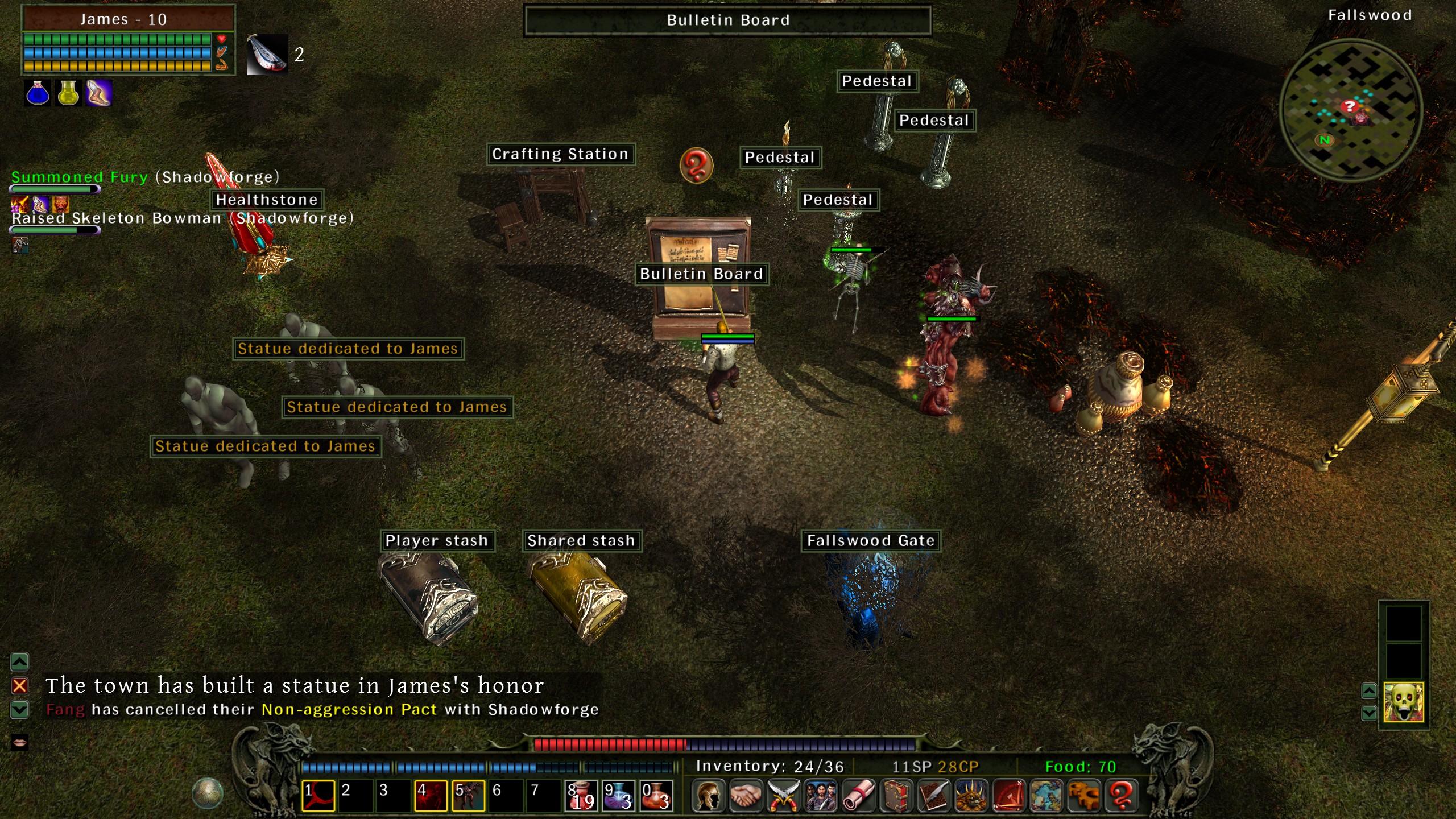 The digital world is crawling with Diablo-likes (erm, I mean ‘Action Role Playing Games’ or ARPGs), but so many of them seem to agree on many things all in the name of convention or convenience. So what happens when a designer sees a two-dimensional world and decides to step sideways?

You probably haven’t heard of Soldak, but when people say “indie developer,” it’s companies like this that they’re talking about. Publishing high-quality and easy-to-consume games since 2004, they have yet to break into the big show. (They’ve Published fun games you probably haven’t heard of like Din’s Curse, which is an ARPG, and Drox Operative, which is an ARPG in space) but what they lack in flair they make up for in heart and unique takes on familiar genres.

At first blush there’s not much to recommend about Zombasite. It’s indie, which means the graphics are passable, but a little dated. The world, while spacious, is a far cry from sandbox; and the crafting system is rudimentary. But how they make you shove your money at them with the violence of an impatient typhoon is the concept of a “living world.” Now I don’t just mean something shallow, like the NPCs having a work shift, or day turning to night. I mean that as you play, there are different factions out there ACTIVELY working against you. Every second that you spend in-game means that all of the other factions, and villains too, are also out and about doing things, and there will be corresponding consequences. Choosing to do one quest means that some other might not be around when you finish it. Choosing to delve into a dungeon might mean that a different area becomes much more dangerous, or a different faction rescues or murders the captive you’ve been not rescuing for a while.

Fear the Howling Tropics of Rabbits! Fear it!

The difference between playing a game with a living world and every other ARPG out there can not be understated. In every other game, you’ve got an endless deluge of NPCs offering up a grocery list of supposedly important favors they’d like you to do for experience and candy, but we all know that the town under attack from Greznar the Kitty-Eater will be just as savable if you go there now than if you take a few months off to gather 1000 faux gnauga hides for Mesha the Way-Too-Trusting. This leads to a suspension of disbelief and lackadaisical pace through every RPG that we, as gamers, have simply come to accept as an eternal norm with a nod toward the ephemeral creature called “game balance.”

But now with a living world you must, no, seriously, plow through at a headlong pace into the Cursed Jungle of Traps (I kid you not that’s a real name of an area in the game) so you can get to the Frightening Badlands of Coyotes (also a real name) to rescue someone who, really and truly, might not survive the next 20 minutes unless you act right. Freeking. Now.

For myself, this point was driven home when my favorite clan member was sitting at my safe base minding their own business, and suddenly I got a message saying they had been poisoned by my Arch Nemesis (you always start with a customized Nemesis and Arch Nemesis because you really should have one in every game you play and why has it taken this long for us to realize that?) and a timer popped up so I could see exactly how long that person had to live. I realized, as I sprinted past chests I would normally pause to open and casually loot, that this feeling of essential speed I was now experiencing was truly unique. While I’d hate to compare this indie project to Skyrim, we all know that the Stormcloaks will be just fine until we were good and ready, and we’d never be faced with a timer counting down Lydia’s precious life-seconds.

We’ll need to make a word the describes the emotion you feel when you see this and think, “Nope. Sorry. Really don’t have time right now.”

The class & skill system can’t really be said to be innovative, but it is made with that most elusive of elements: Love. In many (all) AAA titles each class is carefully balanced to have a similar DPS ratio which is carefully balanced against hit points and support skills and set against a careful level-requirement ladder. Without any skills that really change the world you’re standing on and this can make each class feel like every other class were it not for theme.

Zombasite does not have that problem. Each class (and there are many: Warrior, Rogue, Wizard, Priest, Ranger, Conjurer, Demon Hunter, Hybrid) has three unique skill-tree categories that make each class play three different ways. Sure, the standards are there to make the warrior hit harder or the Ranger fire sharp things way whole bunch more betterer, but they are merely dancing partners to the truly special. It’s not just that the ability to summon demons is the next step up from your Conjurer’s ability to raise skeletons, but it’s another playstyle entirely. Sure, you can summon everything, or you can focus on just Skeletons and the Necromancer skills, or you can just do demons in the Warlock section. Or just shoot lightning in the Sorcerer section (which does DPS, but in a much different way from the three DPS trees waiting for you over in the Wizard build).

My analysis-paralysis is filling me with feelings of confusion mixed with supreme joy. Joyfusion?

We haven’t even gotten to the Hybrid class yet. Ever play Diablo 2 and wish that your Necromancer could have the auras of a Paladin? (Yes. Yes you have.) Well now you can! You can create a new class by picking any two trees from ANYWHERE! Assassin/Gladiator? Yes. Fire Mage/Druid? Yes! Healer/Necromancer? Oh hellz yes!!

The crafting system is…fine. I’m with the majority of humanity in thinking that durability points on items is always a grievous mistake, but without them half the need for crafting would be gone. You get candy from smashing other things and can use that candy to repair things and make other things marginally better. Honestly the game could do without it.

And that brings us to the bad points. The tutorial system is composed of way too many clickable question marks that blink annoyingly and show up at bad times. They tell you too much about unimportant things and too little about important topics. For a game that rests heavily on making a clan and keeping it happy, they give you almost no data about the care and feeding of a clan. The tool-tip that lets you know that you -can- forage is queued to pop up after you’ve tasked someone -with- foraging. Irksome. So too, clan members get chronically unhappy and there is almost no data as to why. Many times one might be happily slaying their way through a quest only to face another blinking signal indicating two clan members back at base are fighting, and the player has no ability to stop this, short of killing or dismissing one or both members.

Overall it's a fine game that lets us run around like a decapitated chicken, drinking deeply of the new emotional roller-coaster experience of actually having our existence feel needed in a video game, combined with a class system that takes everything we love about Diablo 2 and squares it. Alas that it’s harder than it needs to be due to a poorly designed tutorial system and a lack of proper documentation. For an indie game it’s a good overall buy.