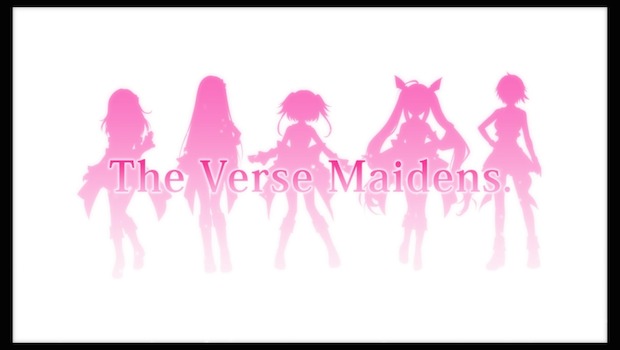 Compile Heart is somewhat infamous for the style of game they develop. Anime aesthetic, referential and sometimes childish humor mixed with lewd hijinks, and intricate RPG systems that provide a wealth of grinding and replayability for those who love to min-max. The Neptunia series, while not everyone’s cup of tea, succeeds in every one of those areas and has earned a devoted cult following because of it.

Omega Quintet, however, does not capture that same niche magic, and I’m afraid only the most devoted otaku will find enjoyment in this title.

There’s a huge amount of customization options for all five of the Verse Maidens.

The premise of Omega Quintet is intriguing, if for no other reason than sheer originality; monsters called Blare overrun the world, forcing humanity into ruined dystopian cities. The only ones who can combat them? Magical girls called Verse Maidens, able to not only match them in combat but also dispel the haze they spawn from through singing.

Having seen that anime like Madoka Magicka can do amazing things with similar setups, I was interested to see if this M-rated outing from Compile Heart would forego the campy humor of Neptunia in favor of a darker setting and a substantive plot.

What Omega Quintet turns out to be, however, is little more than a self-insert fantasy for those who would pine after the five female Verse Maidens. The protagonist of the game is a standard everyday-teenage-boy, with no real skills or defining characteristics besides a tendency to play the deadpan straight man. He’s the Bella to Omega Quintet’s Twilight, able to provide a face when plot necessitates it, but also able to mold into an extension of the player to provide a false sense of intimacy with the varied female cast.

There’s a jarring disconnect between the tone of the game and the presentation; while conflict is often resolved by believing in the power of friendship, and the girls engage in cute antics not unlike a children’s show, the camera leers at them from every angle. There’s many events that the player can complete to raise affection (which affects actual character stats in battle) that often place the female cast in compromising positions, like a water hose fight in white t-shirts or the loosening of a single thread destroying an entire outfit. These situations are played off as comedic, with the male protagonist often being embarrassed and reprimanded for looking at such an exposé, though the camera keeps everything in dead-center focus, making sure you don’t miss a single moment of the action.

Plot-wise, it’s fairly predictable. There isn’t much of a darker mystery to uncover or thread to unravel, just a standard “magical girls fight monsters” story that plays out in anime-style episodes, complete with opening and closing musical animations. The few heartfelt and genuine moments are often understated at best, and usually undermined by the lecherous lens of the player. The plot was best when the male protagonist wasn’t present, because without him, the Verse Maidens become more like actual characters and less like pinups. There’s a fair bit of comedy, at least, and some characters like Kyouka and Miss Mamoka are interesting enough to carry the plot through the duller sections.

Gameplay is where Omega Quintet is most likely to hook players, and is one of the few redeeming aspects of the title. Battles play out in standard RPG turn-based combat, but there’s a lot of emphasis put on combos, turn order and “timing” attacks. Breaking an enemy’s shield down to stagger it into a Field Break status, then following it up with a coordinated assault from your entire party, chaining combos together to Overkill the enemy and gain a boatload of fan appreciation is pretty satisfying.

Battles are deceptively simple at first, but there’s a lot of depth for min-maxers.

There was a ton of in-game jargon in that sentence, though, and that’s endemic of the amount of tutorial and battle practice required to make the most of Omega Quintet’s spiderweb of systems. There’s a constant stream of info and modifiers to take into account in every situation: elemental affinities, range modifiers, support uses, turn order, turn modifiers, turn delays, wait counters, weapon-specific abilities, chain link abilities, Harmonics… seriously, if you enjoy mastering a complicated RPG combat system to its fullest, that might sell you on Omega Quintet alone.

The rub, though, is that all of the systems are ultimately superfluous to all but the most hardcore player. I often had to purposefully focus on maximizing the effectiveness of every turn if I wanted to use those systems, but most battles and even bosses can be cleared by spamming attacks and special moves however you’d like.

Traveling on the first layer of the overworld is pleasantly simple, and there’s ton of sidequests to pick up around spots in town or events to see that grow the characters and provide the Verse Maidens with a little backstory. Once you enter a “dungeon” area, though, you’re let loose in a free-roaming area replete with artificial barriers and long expanses of running. Expect to spend a lot of time wandering around the same areas, looking for the woefully small quest marker, which only appears once you’ve moved close enough for your characters to see it. Quest markers that appeared through the map’s “fog of war” would go a long way in cutting down on unnecessary corner-checking.

Areas are varied, though the backdrops are more interesting than the roaming area.

The out-of-combat gameplay systems are identically complex, though you’ll need to actually use some of them to overcome later enemies. Disk Analysis, Omega Quintet’s spin on a Sphere Grid progression system, is interesting and rewarding, as it’s the only way to see some of the better moves the Verse Maidens can use. There’s a lot of customization options, and the dedicated player will likely have all their Maidens maxed out in every weapon style in no time, allowing for interesting chain link combos and greater versatility in tackling difficult battles.

The non-gameplay systems are where things take a left-turn into weirdness again. Points used to buy upgrades and power-ups are acquired through the increasing support received from fans. Each battle is a broadcast to the remnants of human civilization, and winning their support gives Verse Maidens even more power through their belief.

Chaining special moves is key to taking down larger foes in one fell swoop.

You can earn these points through flashy victory in battle, or you can earn it through concocting concerts in the game’s PV Editor. Yeah, there’s a complex and robust system in place for directing “live concerts” of the Verse Maidens’, complete with the ability to add yourself in with the PS Move camera. What you do with that PV Editor is up to you, but remember Uncle Ben’s wise words: “With great powers comes great responsibility.”

There’s also tons of outfits, hairstyles and accessories to buy, allowing you to play dress-up doll with each of the five Maidens, though the irony is not lost that you can spend hours customizing their outfit and have it be torn off them after two minutes of battle. Yes, clothing comes off when a Verse Maiden takes damage, because at this point you should probably be expecting that to happen.

The PV Editor is really comprehensive, and you gain new dance moves and songs throughout the game.

At this point I’ve written way more than I thought I would about this game, and that’s likely because I wanted so badly for this game to pull the veil away and wow me. The setting is ripe for storytelling: a dystopian future, humanity held together only by the self-sacrifice of the few, putting themselves in harm’s way to be a beacon of hope. The characters could all have been expanded upon and allowed to breath in their own right, allowed some agency beyond the player’s whims.

But sadly, the carnal appeasement of the player is of the utmost importance, and Omega Quintet couldn’t grab me in a meaningful way, even after over 20 hours of gameplay. I’ll likely finish it out and possibly even try for the True Ending just to see if, by some miracle, it ever turns around. As it stands, I can’t recommend it to anyone but either those who seek little in their game besides objectified schoolgirls, or to Compile Heart fanatics craving for something to tide them over until the next Neptunia title.

Omega Quintet is a promise that fails to execute, and squanders most its intriguing battle mechanics and interesting characters with over-the-top fan service and rote, trope-filled plots.