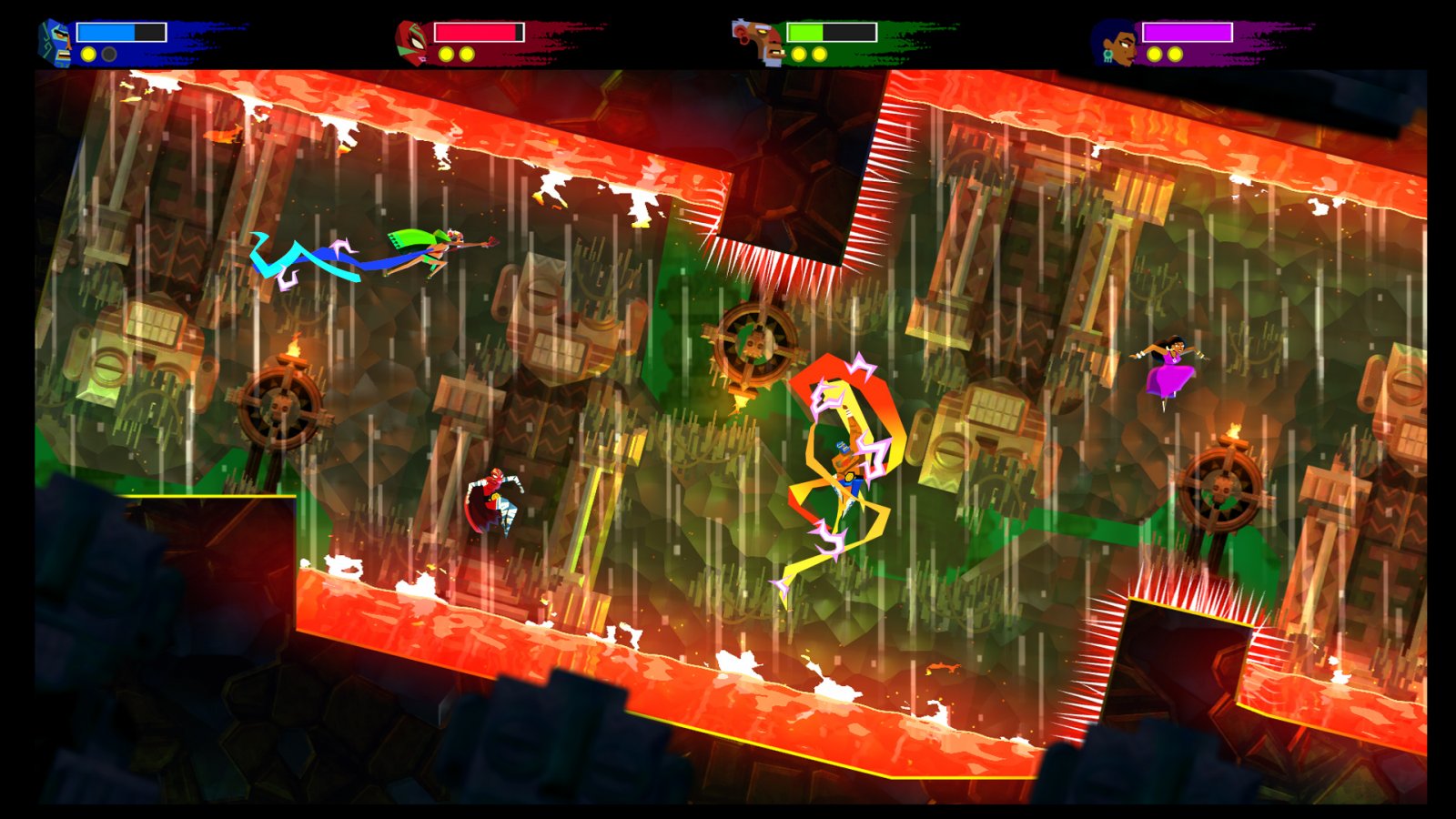 With the original Guacamelee, developer Drinkbox Studios put a unique spin on a well-established genre by adding wrestling moves to the Metroidvania formula and setting it in Mexico, or at least a fantastical version of it. Guacamelee 2 doesn’t do much to shake up the original’s formula, instead building on its foundations with more characters, more abilities, more chickens, and more lame-as-hell jokes.

The first thing that struck me about Guacamelee 2 was just how great it looks. The original was already a good-looking game, with a unique aesthetic and a seemingly unlimited color palette. It may not entirely come across in screenshots, but Guacamelee 2 is a huge leap forward visually. Obviously it benefits from its higher resolution, as the original was developed for the previous console generation, but that’s not the biggest difference by a long shot. Where the original was colorful, Guacamelee 2 is an absolute chromatic explosion. Even its first stage, set in a normal Mexican town, pops off the screen with color, and that’s before you start exploring other wildly imaginative dimensions. There’s also much more detail in the game’s backgrounds, and more life in characters’ animations and the effects that accompany special attacks. In the latter case, it can actually become distracting, especially in the game’s multiplayer mode, as a screen full of players and enemies all light up like variegated fireflies as they launch attacks.

Combat feels more hectic this time around for a few reasons. For one, your repertoire of attacks has grown, and you need to take full advantage of that to succeed. Guacamelee 2 brings back the colored shields some enemies wielded the original, which can only be destroyed by a corresponding special move. It also plays more with your dimension-shifting powers, again returning from the original, which allow you to swap between the living world and the dead world at will. You need to be in the same dimension as your enemies to hurt them, and Guacamelee 2 sets up lots of scenarios where switching dimensions will change the level you’re fighting on, or where both dimensions exist simultaneously in different parts of the same arena. At its core, though, combat is still fast and simple to handle, but packed with a surprising amount of depth. You can get the hang of grappling and pummeling enemies within seconds, but the intricacies of ability combos and perfect timing for attacks reward more technical players.

Combat sometimes tipped over the line from exciting to exhausting, though. Especially toward the end of the game, Guacamelee 2 ramps up its difficulty was by packing rooms full of enemies, giving them all attacks that interrupt and knock your character back, and placing them near a hazard that kills you on contact. Fortunately, the game is generous with checkpoints, but it’s still not fun to repeat the same combat encounter because you keep getting tossed into an instantly lethal piece of geometry.

Aside from combat, the game’s other main pillar is platforming, and that’s where it really shined for me. Unlike the cheap tricks that kept combat difficulty escalating, Guacamelee 2’s platforming posed a steadily increasing challenge that always felt fair and interesting. Throughout the game, you build a large arsenal of traversal moves that will all be tested by later platforming sections. Levels near the end of the game have you jumping and rocketing from wall to wall, slingshotting from grapnel points in the map, and using leaping uppercuts and furiously flapping chicken wings to complete precise platforming challenges. The challenge never ventures into the obsessive, pixel-perfect territory of games like Celeste or Super Meat Boy, but it’s enough to make you feel a rush of pride with every successful climb. Add in moving platforms and dimension-shifting walls, and you have a game with seemingly endless ways to test your platforming skills.

Both combat and platforming rely on your special abilities, which Guacamelee 2 expanded greatly from the original. You still have access to the various punches, dives, and throws that make Guacamelee’s luchador combat so much fun, with plenty of welcome additions to both your luchador and chicken forms. As a chicken, you can now launch yourself at enemies, bounce off certain walls, slide along the ground to send enemies flying, and even lay completely harmless eggs. You unlock these powers by completing chicken levels scattered throughout the overworld, which contained some of the most pure platforming segments of the whole game.

The new abilities and more complex levels make it clearly superior to the first game, but they don’t necessarily sustain it over its entire length. You can beat the game in around eight hours, but only by leaving huge chunks of content unexplored. Aside from the main story, there are hidden keys to collect, chicken levels to complete, and side quests strewn around the map. What seemed to be missing was a compelling reason to find it all. During long platforming sessions, the game is an absolute blast. It’s challenging enough to keep you at full attention, but forgiving enough that repeatedly failing a tricky jump isn’t stressful. I found myself playing the game at the end of the night to unwind, even when I was facing a fairly brutal platforming challenge. Unfortunately, you can never get too much platforming in before being sidetracked by the — still fun, if inferior — combat. Guacamelee 2 leans hard into the “lucha room” concept of the first game, where the game locks you in a room with your enemies until you take them down. If you find the combat less satisfying than the platforming, these rooms serve as little more than speed bumps to your enjoyment. As the game wore on, they eventually turned exploring the map into a chore, rather than the high-flying, acrobatic treat it started out as.

I felt the same way about the game’s story. It might as well have just been the same story from the original game, for all the difference it makes. The game begins with an out-of-shape Juan, retired from the hero business and raising his kids with Lupita. The opening bit is pretty clever, with Juan’s domestic lifestyle serving as a good reason for him to have forgotten all the powers he gained in the first game. But soon, Juan has to save the world from megalomaniac Salvador, a luchador from another timeline where Juan died and he defeated Calaca, the first game’s big bad. The story doesn’t need to do anything but give Juan a reason to embark on another adventure, which it does, but it’s so thin and uninteresting that any time it intrudes on the action, it’s unwelcome. And more bad news for anyone whose sense of humor encompasses anything other than 10-year-old Reddit threads: Guacamelee 2 is just as weighed down with internet memes and video game references masquerading as jokes as its predecessor. It even features a hidden room that obnoxiously pokes fun at people who criticized the first game’s embarrassing attempts at comedy. There’s something to be said for standing your ground as an artist, but in this case, learning from the past may have been a better way to go.

Guacamelee 2 recaptures everything that made the original great and adds a few new tricks for good measure. It’s a joy to look at and it feels great to play, especially when it focuses on challenging platforming. The game feels a little padded out with lots of backtracking and locked-room combat sequences, but it’s still an absolute blast to play.

A committed indoor kid, Bryan moved from Pittsburgh to Los Angeles for a prettier landscape to ignore. They can be lured outside with promises of taco trucks and film festivals, and enjoy trawling through used book stores for works on the occult. Bryan has been gaming since the SNES era and is a sucker for good pixel art.
Related Articles: Guacamelee 2
Share
Tweet
Share
Submit