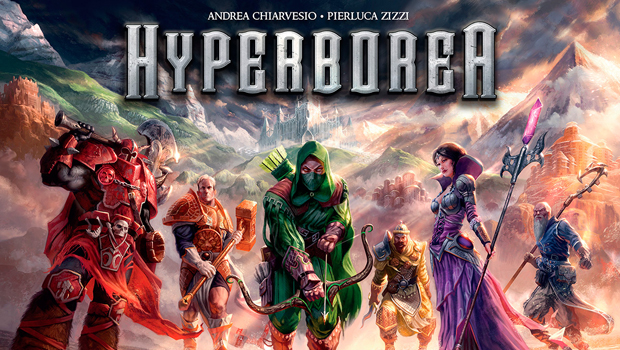 I read somewhere that more than two hundred games were released at GenCon a few weeks ago. That is a lot of cardboard and plastic. Hyperborea was one of those games unveiled to the world, but is it worth talking about? Yes, yes it is. I know I have not seen a fraction of the hundreds of games released at GenCon, but Hyperborea is clearly a shining star among them.

In Hyperborea players strive to control the realm; but not just military strength is needed, players will also need to balance their technology, resources and precious influence. As the six nations rush fill the power vacuum, who will come out on top?

The heart of Hyperborea is the rather innovative auction cube system, that could easily be labeled “cube building”. Think: Dominion, but without the shuffling of cards. Each player starts the game with a board of available actions that are triggered when appropriate colored cubes are placed on them. Players will also start with one cube of each of the six colors, and one additional cube of their choice. At the start of every turn, players will have three randomly drawn cubes available for placement. As most actions only require two cubes to activate, partially filled actions can be utilized in later rounds.

Throughout the game players will be able to gain more cubes and more actions via their upgrade tracks and technology cards. Each player has six color tracks that can be upgraded using various actions. Once a track has reached a specific threshold, it may be reset to add a cube or two of that color to the players bags. Science cards may be researched and collected to give the player more available actions spots with either better actions or cheaper actions. This advancement does come at a cost, as each technology card comes with a semi-useless gray ‘waste’ cube that is added to a player’s bag.

Most of the action in Hyperborea takes place on an array of hexes that make up the landscape. Every game has a similar set up with a central hex, a ring of six unknown tiles and then the individual player’s home lands around the edges. Each tile has some sort of terrain type associated with it and either a ruin, a city or both. Ruins are used for one time perks by whoever gets to them first, and cities can be utilized over and over by the player who controls that tile.

Each of these things, the cities, the ruin perks, and the player board action spaces all have the same iconography for what ability is gained. The icons all form a simple set of actions from generating movement points, upgrading a color track, collecting victory points and recruiting more fighting units. The primary differences being how many of each action or resource the players receive.

At the end of a player’s turn, they draw three cubes from their bag. If their bag is empty, they perform a reset. First all completed actions are cleared of their cubes, returning the cubes to the bag. Then the player’s units move out of cities (allowing them to be utilized again on a later turn). Finally any unused cubes are returned to the bag as well, and three new cubes are drawn for the next turn.

Hyperborea ends when a preset number of end conditions are met by the players. These end game goals are either based on victory points, units on the map or number of science cards in play. Once the preset number is reached, each player’s score is calculated based on just about everything in the game. Each cube gained is worth points, along with enemies killed, final board position, and contributions from technology cards. These scores are summed and compared, and the player with the most is the winner.

Hyperborea’s production is top notch. Asmodee and Yemaia did not cut any corners with the components. Each player color has unique miniatures for their units and their own massive player board. The cubes and bags work perfectly together. All of the cardboard components in the game are surprisingly thick and sturdy. They could not have done a better job with the components.

Hyperborea does present a problem for those who are color blind. I didn’t even think about it until I tried to play with a color inhibited friend. The cube colors are hard to distinguish if you have a hard time differentiating color, or even if you are in a low light situation.

Other than that, the artwork and graphic design scream, “Come Play Me!” while still being subtle enough to not be distracting. It would have been interesting to see a little more variation on the tiles as they can look a little stale when everything is the same terrain type. As I mentioned before, the iconography in this game is stellar. Once everyone knows what each of the seven or so symbols do, you are ready to play.

The game supports two to six players, and does it rather well across the full range. Six players can take a while to play, but it is still enjoyable. A four player game took us about 90 minutes. The rule book is one of the best I have read in awhile, full of examples and references. I don’t think we got any rules wrong on our first play. Teaching the game is also straight forward, and fairly accessible for new-ish gamers.

Hyperborea’s core mechanic, with the use of cubes, is a breath of fresh air in this saturated world of card driven deck builders. This game has distilled the essence of deck building down to its core of strategically maximizing probability and opening up opportunity. Each of the six colors is tied to a specific type of action. Red cubes are always used to attack. Gold cubes are always used to gain victory gems. Because of this players are able to easily distil a strategy and execute it. In addition to balancing probability, players must also balance the number of cubes they draw. A reset is only performed if there are no cubes left in a bag. This means that a player may be forced to draw one cube on their turn, leaving them without many options.

Pairing the cube distribution with the available actions is also particularly rewarding. While the color upgrade track will offer more cubes, the technology cards offer more available actions. This is an important aspect as players shift to end game play. Someone with a bag full of red attack cubes will not have too many places to play them if they don’t have an appropriate number of red action spaces. The technology cards are grouped in to colors to make them easier pick. Purple tech cards, work well with purple cubes. 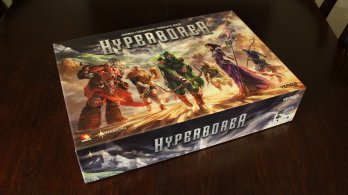 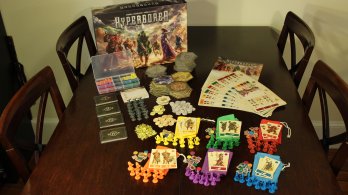 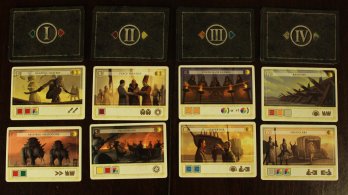 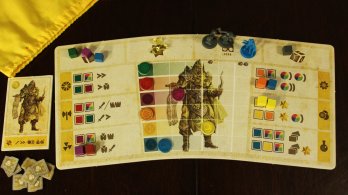 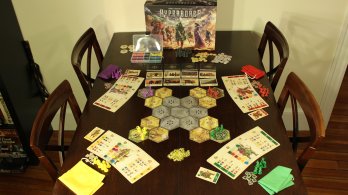 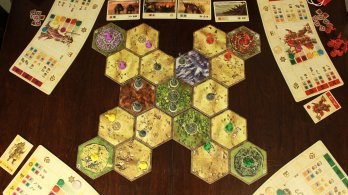 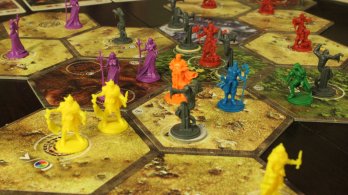 In addition to the different actions for each cube color, each player can also play with a player faction specific power. Each of these sets the different factions apart right from the start. Some of the factions will lead a player to invest heavily on tech, while others will be able to move quickly across the board. These variable powers offer a different game experience, or at lease strategy, from game to game.

If you were to remove the whole cube building thing, and replace it with a different mechanism, like card based deck building, worker placement or dice drafting, Hyperborea would still be a great game. Everything else in the game jives just as well as the cube mechanic. I particularly appreciate the end game scoring. There is a distinct emphasis on devaluing a militaristic strategy. It is possible to win with it, but it is not as straightforward as other games in the genre. In order to get significant points for military, you must attack all of your opponents, not just gang up on one. As you can imagine, in a six player game this can be a little difficult. Besides that, there are a handful of very different, yet all viable, paths to victory.

Not surprising for a game using hexes and variable player powers, the replayability of Hyperborea is significant. The game only uses six border hexes but comes with thirty and in addition six center tiles. Each relic rewards an action from a sizable stack of randomized tokens. Pair with that the multiple variable player powers and even with the same people, utilizing the same strategy, no two games will be alike.

The theme in Hyperborea could be a little more pronounced. There is some back story for why the six factions are fighting, and there is some justification for the focus of each of the colors, but it seems a little lost once you start playing. If the unit miniatures would have been anything less than awesome minis, some people I played with would not have ever sat down. It skirts the line of a cube pusher, but makes up for it with the thematic link of color and action.

There are only two bad things that I can say about Hyperborea. One, it is possible to sap your strategy really early on in the game, and to have a hard time recovering. This was noticed by a few players their first time when they didn’t fully grasp the various complexities. For example there are some tech cards and cities that allow for players to destroy cubes. If used unwisely, this could take a player out of the game. And two, the game lacks any real catch up mechanic. When you notice that your opponent is making bank on a nice chain of technology cards, there is little you can do to stop them, other than play better and win first. This is not to say that the player interaction is low, because there is plenty of back and forth for control of the tiles, but certain actions are not influenced by other players.

Oh my goodness, is Hyperborea great. Starting with an almost flawless rule book that is a cinch to teach, along with top notch components, Hyperborea is already ahead of many other games like it. Players are treated to an elegantly simple action selection mechanic paired with a well balanced area control and tech building game. If your copy of Eclipse is getting a little dusty, or if you want more to do in Exodus: Proxima Centauri than just attack your opponents, Hyperborea takes a solid stride in a great direction. I can see how the length and complexity might not be for everyone, but if you want to see what an awesome game is like, go play Hyperborea.