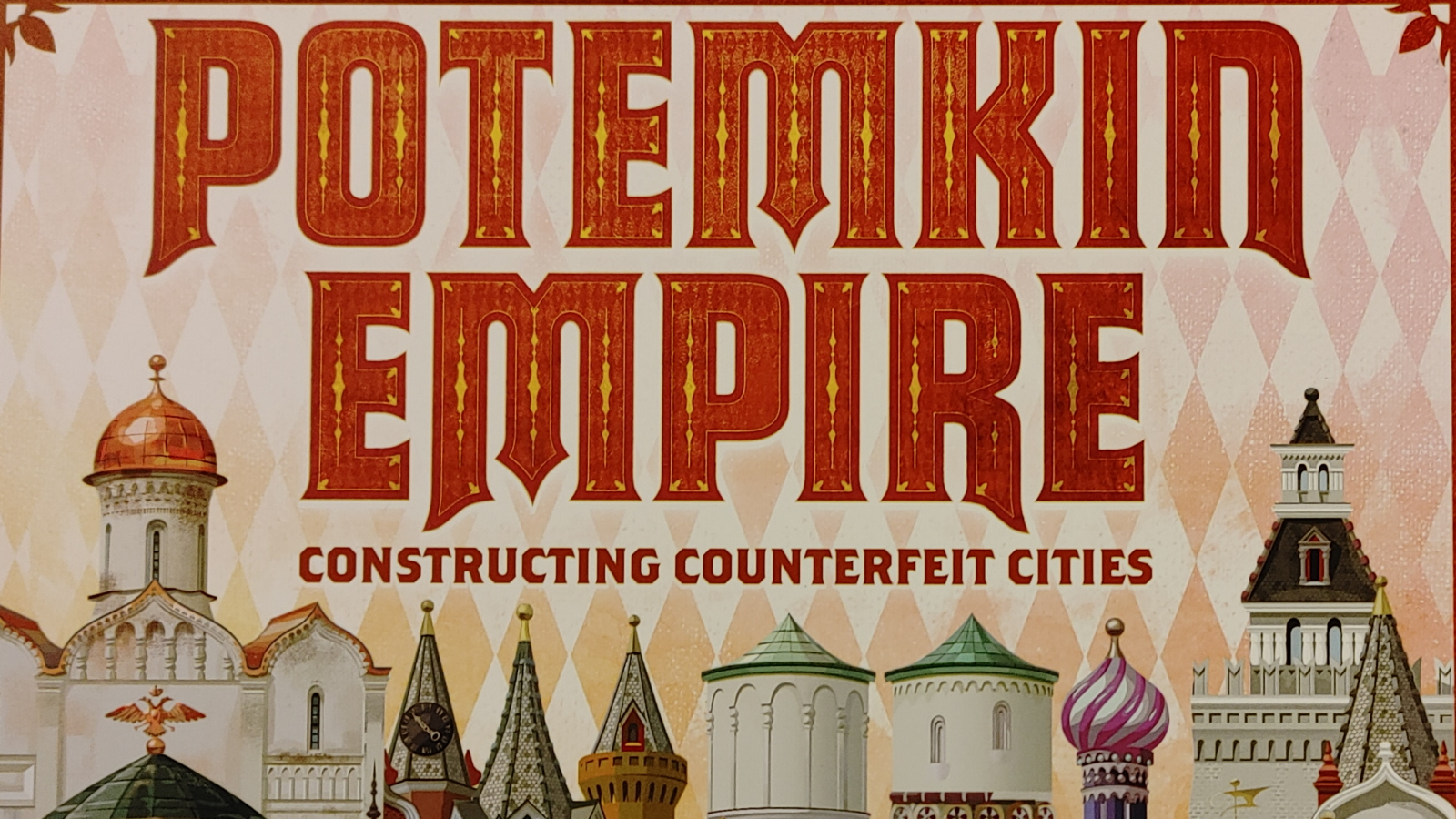 In 1787, Catherine II traveled along the Dnieper River, and Governor Grigory Potemkin erected phony settlements along the river to impress the empress. In Potemkin Empire, published by Indie, you are tasked with managing your own phony cities in order to be seen as the most impressive city. Each month, players draft 4 cards, which will either show a real building, a fake building, or a fake building with some sort of ability. Because each player takes one card before passing the rest, it’s possible to mind game out who might have which card. Each turn, a player may either build a building with one of these cards, or use an ability on a card in hand, or activate spies or industry.

There are 5 different buildings available to build: Espionage, Science, Culture, Government, and Industry. Espionage creates spies, which are used to reveal other player’s buildings for the frauds they are. Industry grants points for each round you otherwise pass, called production in game terms. Science, Culture and Government buildings each provide a bonus to the player who has the most of those buildings, as well as 1 or 2 points for Culture and Government buildings. The science token allows players to draw one card each round, the culture token is a one-time shield against spying, and the government token allows players to go first on a new month. Each month ends when all but one player have started to produce resources out of their industry.

I really like the premise of this game. The game is a low stakes bluffing game. Each building provides a powerful benefit, if wisely utilized, and the game has a tight balancing to the scoring that caught me off guard. On the outset, the scientist seems like an extremely powerful benefit, but it’s quickly seen that the scientist doesn’t actually provide any victory points, and every other player controls how long you can play cards. 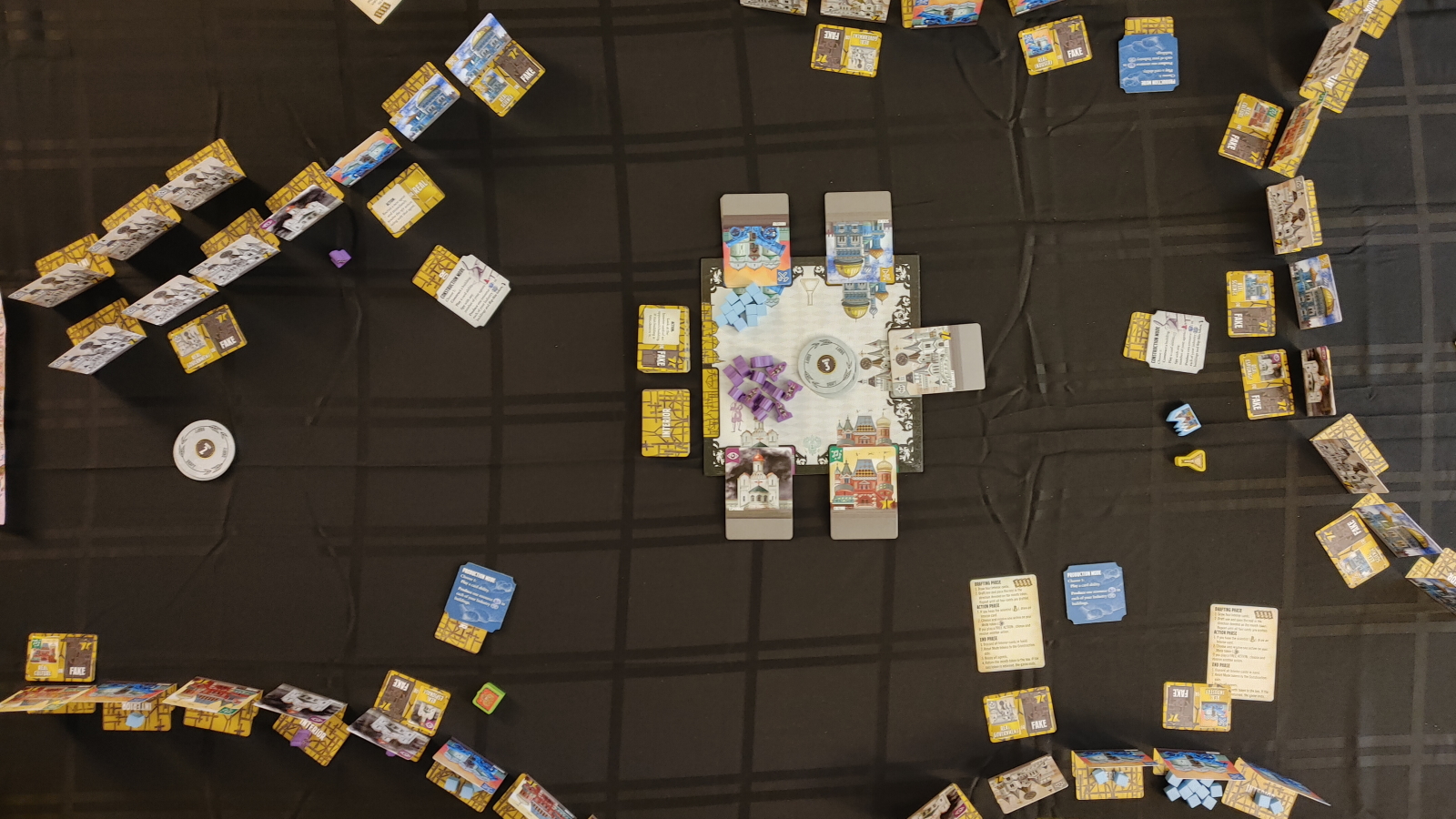 The point where the game stumbles for me is in the balance of the cards. There are far too many real cards in the deck, and those cards tend to dictate the strategies players will utilize. A game about making phony villages should mean that most of the buildings should be paper thin. However, it’s closer to 60% – 70% of buildings you acquire will be real. This isn’t helped by the majority of all fake cards having an ability that is useful enough to just use the ability, instead of risking having a fake building.

For a game about bluffing on what buildings are real or fake, there’s precious little to bluff about. Spying is a simple, all or nothing kind of deal (with the exception of spying on other spies), and instead of trying to feel out what your opponent is going for, it’s often easier just to drop a spy in front of several different buildings and see what happens.

I also feel like the rules on where the science, culture, and government tokens go are too simple. Cards and spies can easily move those components around the board, so the person with the most of their respective buildings is often not the owner of those tokens. However, despite a token sitting at the center of the table, a player building a new building of its type can’t take it unless they match or build more than the player with the most. This just feels strange when a token is clearly available for the taking, and would be a nice thing to have addressed in the rules as well, since it means that some players who don’t go for one of those buildings may simply feel like it’s not worth building them going forward either. Other situations are also not covered in the rules, such as when components run out. 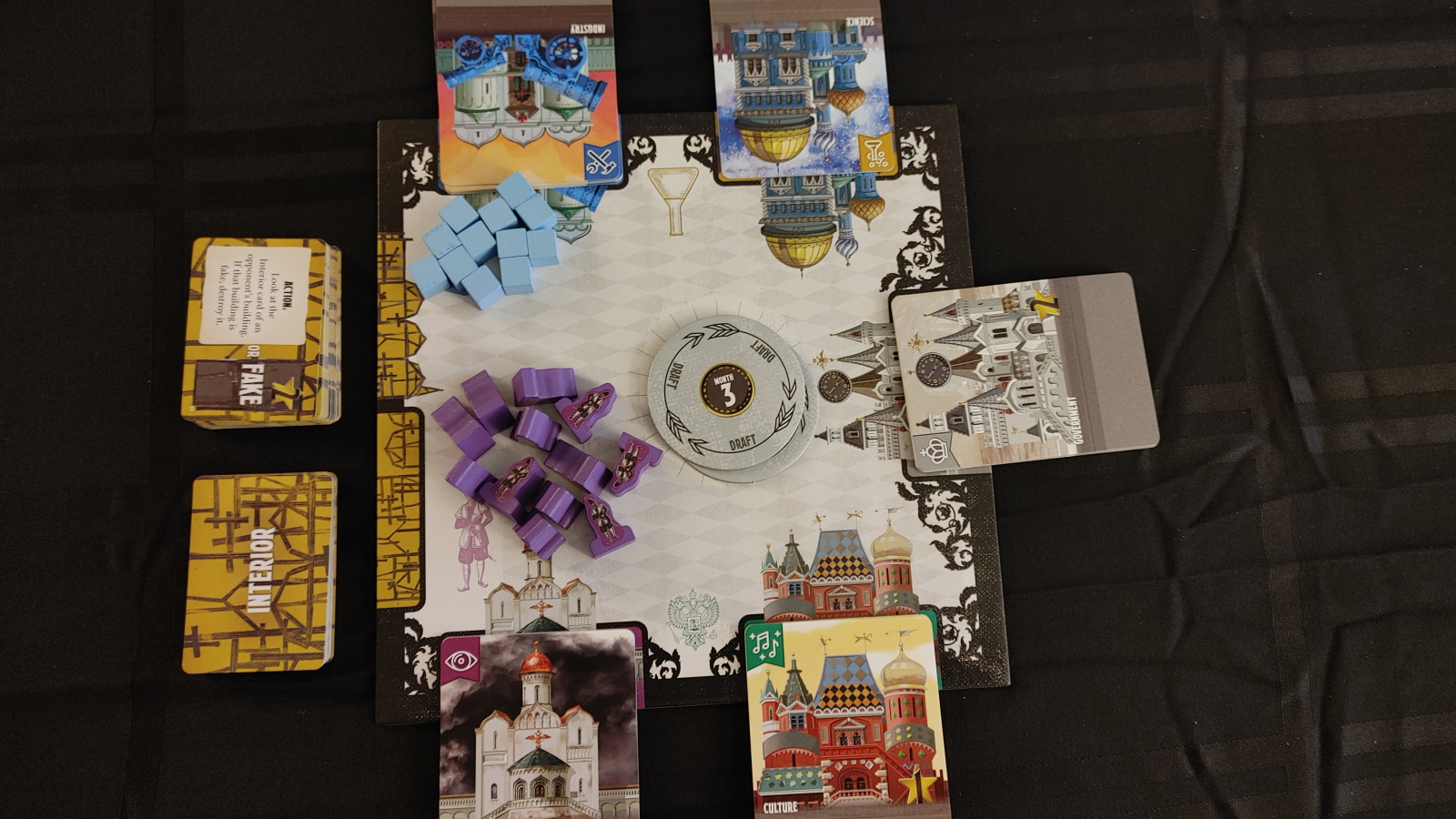 As for the components, I have only one real complaint: The building cards themselves. They use these pre-creased foldable cards, which means a table looks pretty impressive towards the end of a game, but results in a lot of fiddling with buildings, trying to get them to effectively hide the resources behind them, or trying to get them to stand on their own at all. As much as I like the look of the buildings standing up on the table, from a useability standpoint, I think just some large cards hiding smaller spy and resource cards beneath them would function better. This is especially problematic towards the end of the 3rd and 4th round, where a veritable city of cards are available to each player, and so the table gets a little tight.

The other components are fine, but nothing impressive. Custom wood tokens represent your spies, and simple wooden cubes represent the resources your industries make. The game comes with some stickers to put on your wooden tokens, but it’s not a necessity.