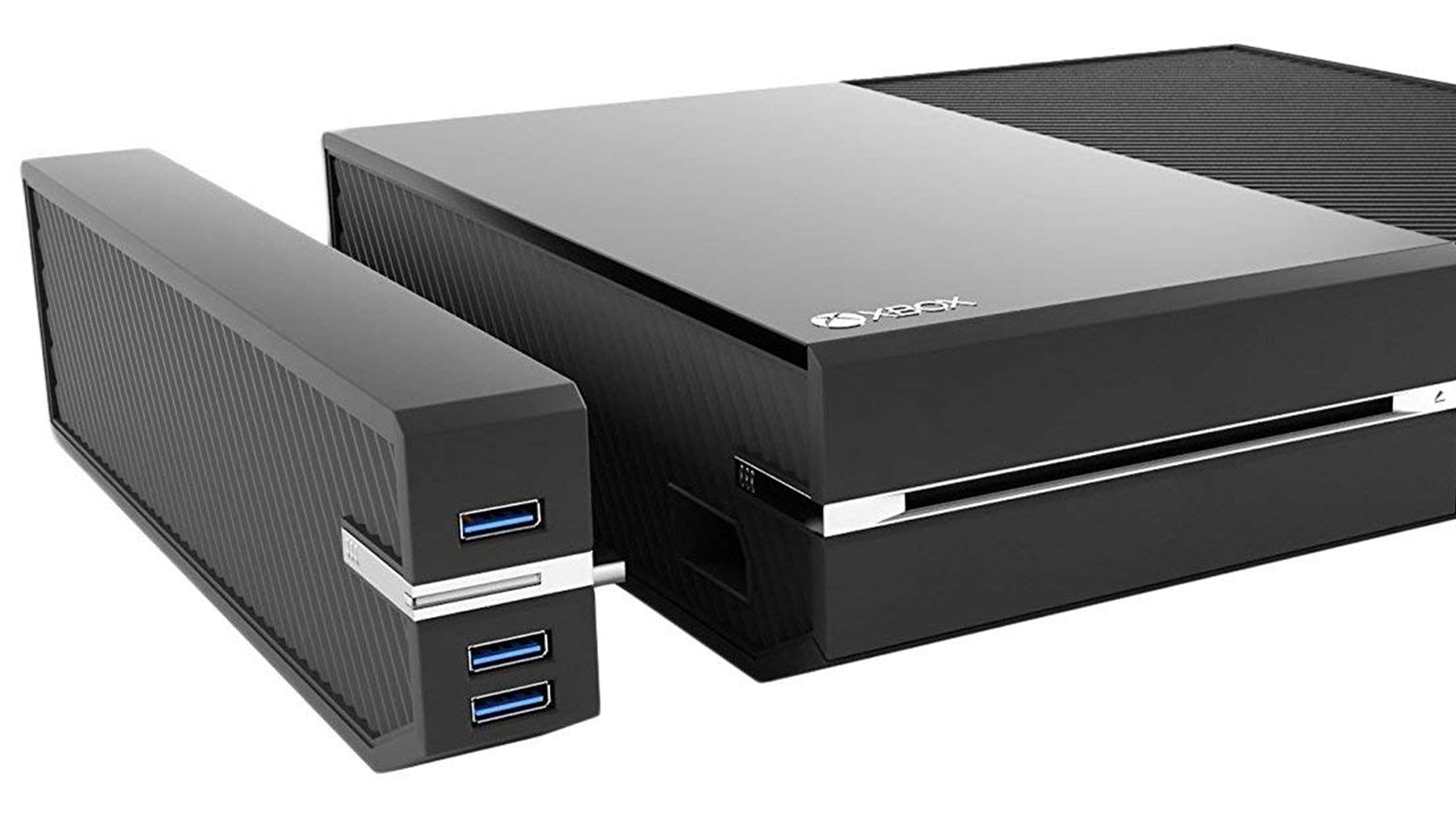 A lot of research and development went into creating the Xbox One and Xbox One X, but despite two bites at the apple, Microsoft dropped the ball in two areas both times. For anyone who owns one, you immediately know which two pain points I’m talking about — storage space and USB ports. That’s not to say that the device doesn’t have USB ports, but they are located in painfully inconvenient locations. Hardware manufacturer Fantom Drives is looking to solve both problems with their Xbox One Storage Hub. I got my hands on one and snapped it onto my launch Xbox One to see how it performs.

The instructions for installing this drive are as simple as it gets. Using a flathead screwdriver, butter knife, or something with a flat edge, pop the grill off the side opposite of the Xbox symbol where the side USB port is located. With that grill removed, the Fantom Drive clicks on in its place with a satisfying snap. Once securely in place, you’ll power the Xbox One on and wait. The system immediately recognizes that “external storage” has been attached stating “Fantom Drives – External Storage ready”. At this point, the system is still installing to the internal drive by default, so a quick trip into the “My Games and Apps” and then into Storage will allow you to change the default, ensuring that future (and any current, if you are inclined to move them) games and content are installed on the Fantom. Here’s a capture of what that sequence looks like:

Under the hood (or more accurately, under a latched side compartment) lies the heart of the Fantom Drives Xbox One Storage Hub — the hard drive. Fantom went with industry leader Seagate for their drives, utilizing a 2.5” 5400 rpm Seagate Barracuda 5TB hard disk with a 128MB cache. Sites like Backblaze that track hard drive reliability over time have consistently rated Seagate’s drives as well under 1% failure rate, with this drive in particular showing zero reported failures over the last two years, making it an excellent pick for your precious save games.

The drive is capable of throughputs of up to 140MB/s, according to Seagate’s spec sheet for the device, and much of that comes from the 128MB of multi-tiered cache. Normal hard drive cache is best described in terms of buckets — when the faster (and smaller) DRAM bucket gets full, it simply dumps the bucket into the larger hard drive bucket, wherever that ends up being. This can cause fragmentation of the data, making seek times longer as the data has to be stitched back together for consumption. With a multi-tiered cache, the same bucket analogy holds, except that the hard drive bucket is a reserved space called a “media cache”, which then is moved to the hard disk in one large chunk. This ensures that there is no fragmentation of the data to maximize performance as sequential reads are far faster than a random one.

A Seagate BarraCuda drive lies at the core of this system.

There is a lot of confusion around whether or not USB 3.0 would be faster than the internal SATA II controller of the launch Xbox One that powers the 5400 rpm internal drive. SATA II’s maximum throughput is 3Gbps, whereas the USB 3.0 ports are capable of 5Gbps, so it stands to reason that the external drive would be faster. In practice, these theoretical maximums don’t come into play as the USB 3.0 ports are funneled through the SATA II bus, and an external 5400 rpm drive will be unable to max out that bus. Moving to a SSD would shave about 15% off of your load times, but would also drastically limit the size of available drives, as well as pushing the cost dramatically.

My only real technical complaint with Fantom Drives Xbox One Storage Hub circles back to the hard drive. The Seagate BarraCuda hard drive normally carries a 2 year warranty when purchased from Seagate, but as a part of this pairing, Fantom Drives is only offering a 1 year warranty. This shortened warranty shouldn’t dissuade anyone from the purchase as the BarraCuda is an excellent piece of hardware with top-tier reliability, but losing half of the warranty isn’t something to ignore.

There is one thing I absolutely cannot ignore about the Xbox One Storage Hub — the price. A comparable 5TB USB SuperSpeed 3.0 hard drive from Seagate, the same manufacturer as the drive in this unit, but without the USB hub, will run you roughly $179.99. A powered hub will cost you an additional $20. That makes the combined package feel like it’s about $50 more expensive for combining the two, though admittedly the product does look and feel like it was created by the Microsoft team.

As an avid Rock Band 4: Rivals player (yes, still) with a wired ION Rocker drum kit, a wife who sings, one wireless guitar, and one legacy axe that needs the wireless adapter, you can see just how fast three USB ports can disappear. The Xbox One, and the Xbox One X are both able to deliver the three needed ports via a powered USB hub, but the fact that the ports are split one to the front, one to the side, and one to the rear makes using them a challenge. This Xbox One Storage Hub pushes three USB ports right to the front of the unit, allowing players to utilize them with ease. It’s one of my chief complaints with Microsoft’s designs, and one that Fantom Drives apparently shares and is only too happy to solve.  If you’d like to try one for yourself, here’s an easy link to pick one up on Amazon.

With three easily-accessed USB ports and 5TB of reliable Seagate-powered storage space, the Xbox One Storage Hub from Fantom Drives is a clean expansion for the original Xbox One. While I wish it had the longer Seagate warranty we’ve come to expect, it should serve raise the speed and capacity that the Microsoft’s launch design lacked.

Ron Burke is the Editor in Chief for Gaming Trend. Currently living in Fort Worth, Texas, Ron is an old-school gamer who enjoys CRPGs, action/adventure, platformers, music games, and has recently gotten into tabletop gaming. Ron is also a fourth degree black belt, with a Master's rank in Matsumura Seito Shōrin-ryū, Moo Duk Kwan Tang Soo Do, Universal Tang Soo Do Alliance, and International Tang Soo Do Federation. He also holds ranks in several other styles in his search to be a well-rounded fighter. Ron has been married to Gaming Trend Editor, Laura Burke, for 21 years. They have three dogs - Pazuzu (Irish Terrier), Atë, and Calliope (both Australian Kelpie/Pit Bull mixes).
Related Articles: Fantom Drives Xbox One Storage Hub, Hardware
Share
Tweet
Share
Submit