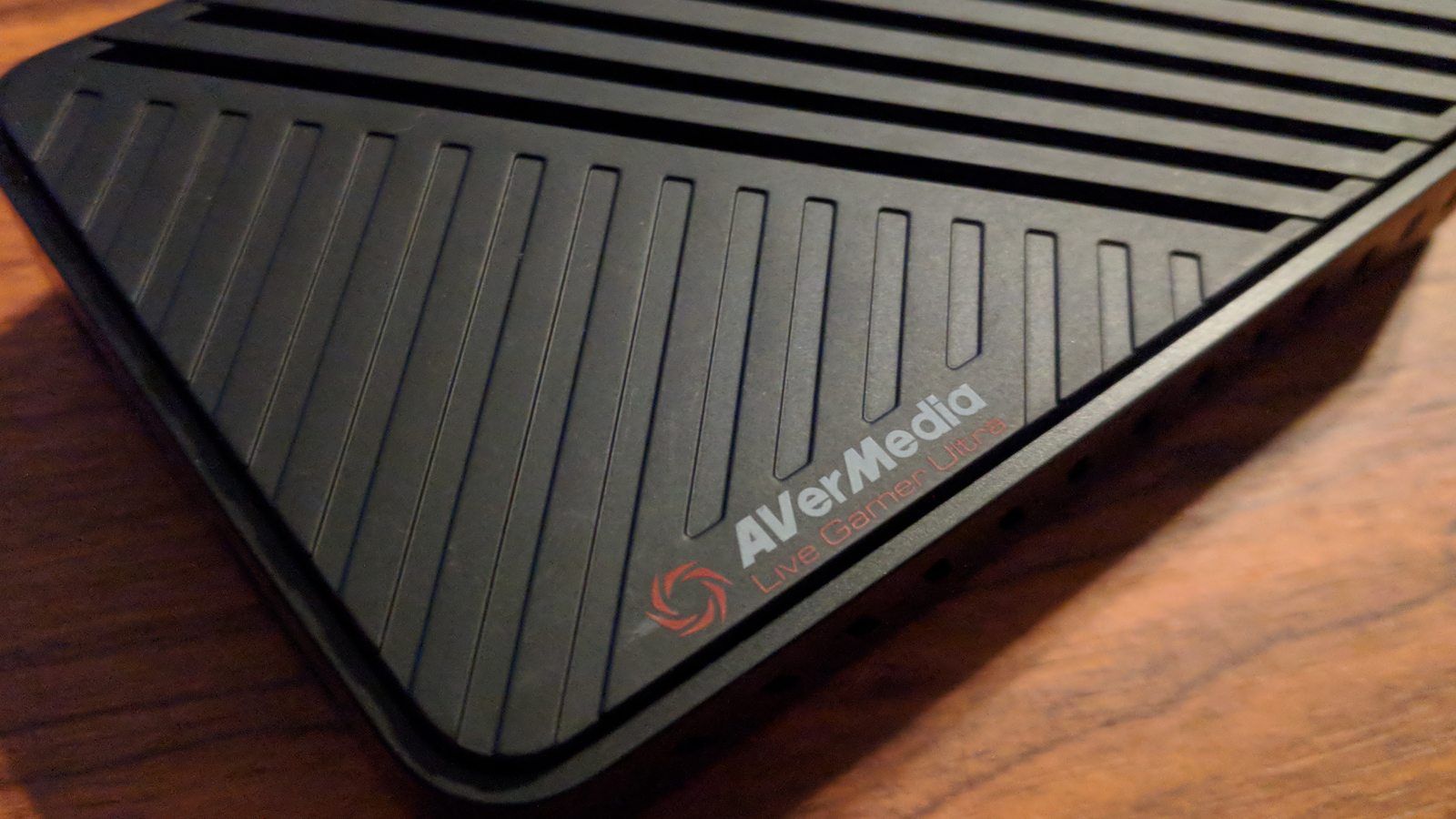 Less than six hours before I left for E3, I received my AVerMedia Live Gamer Ultra — AVerMedia’s new portable 4K capture rig. Did I take the risk on a system that wasn’t even listed on the company website yet? Did I run the chance that the whole thing could sputter out and fail to capture games at E3 that I’d only get one shot at due to the nature of capturing at a trade convention?

I like trial by fire — hell yes I did.

Having used AVerMedia’s products in the past, they’d earned my trust, so I packed up my Live Gamer Portable 2 as backup, but dropped the far-lighter Live Game Ultra in my bag as the intended primary and set off on my way. Before we get into how it performed, let’s crack the hood and get into the specs of this tiny device and what it’s capable of delivering.

The AVerMedia Live Gamer Ultra is smallest 4K portable capture rig on the market, capable of capturing at resolutions and framerates of 2160p (aka “4K”) / 30fps, 1440p / 60fps, or 1080p / 120fps, but if I stopped there, I’d only be telling half the story. Like the aforementioned Live Gamer Portable 2, the Live Gamer Ultra has a full array of pass-through capabilities. While the same resolutions are supported, the framerates are, in fact, double what you can capture, topping out at 1080p / 240fps. Better still, it also supports full HDR to showcase the full gamut of color possible if your TV supports it.

Capture is supported across two codecs — H.264, or H.265, both supporting advanced audio coding, or aac — the generally accepted of the “lossy” formats, and comparable with mp3. H.264 will load directly into YouTube and Vimeo without complaint, but H.265 will not — just a word of caution. You can thank Google for that foolishness, as the far better codec is 5x more efficient. Still — when they catch up, this device will be ready to support it, giving it a bit of future-proofing.

At just over 4 ounces and slightly smaller than a deck of cards, there is one advantage that the Live Gamer Portable 2 has over Live Gamer Ultra — the former doesn’t require a laptop. That said, the Portable 2 is also incapable of 4K capture, so check and mate for those wanting high quality snaps of their favorite titles. Using the included USB 3.1 to Gen1 Type C cable, I plugged in the device.

Along with the AVerMedia Live Gamer Ultra came all the needed cables, as well as a small card for a familiar pair of software bits. With download links for RECentral 4, the newest iteration of the software that AVerMedia bundles for capture, and Cyberlink PowerDirector 15, a powerful editing suite I’d been using for years before I made the switch to the Adobe suite of products, you’ll be set whether you want to edit offline, stream your screen, or stack a whole host of widgets alongside your capture for maximum immersion. We’ll get back to the software side in a moment — let’s talk about setup.

I use a Microsoft Surface Pro 4 for my travel device as it has enough power to handle capture, but it is highly portable and light. After installing RECentral 4, I simply plugged in the Live Gamer Ultra and plugged the HDMI cables into the designated ports. Plainly labeled as HDMI in and HDMI out, the only other cable to plug in is the USB cable. It doesn’t get any simpler than that. Once connected, firing up the RECentral 4 software immediately interfaced with the now-connected PS4 Pro, and was ready for capture. All I had to do to initiate the system was hit the big red REC button and I was off to the races. Below you can see a quick capture of God of War, Injustice 2, and Amplitude running at 2160p.

The best part is that there are several videos that I captured with the AVerMedia Live Gamer Ultra during E3 that are featured on our YouTube channel. There were also a few that were captured on a Atomos Shogun capture rig that cost over $1,400 and required a SSD on top of everything else to accomplish the same thing. I’m not going to tell you which are which, because if you can’t tell the difference, that proves my point perfectly.

While I use a Surface most of the time, it is important to point out that that not all of the captures in the video above were done with that device. Currently, the Live Gamer Ultra isn’t supported on macOS (which is fine by me — I don’t own one), but the Surface isn’t powerful enough to handle 4K. For that, I needed my beefy OriginPC laptop.

As you can see, just like playing a game in 4K resolution, capturing 4K is fairly demanding. It’s the reason why the Live Gamer Ultra isn’t “headless” like last year’s Live Gamer Portable 2. In fact, at 1080p / 60fps, my memory on my Surface Pro 4 were sitting at around 90% each, though I never saw a dip in framerate (something that’s tracked on screen, thankfully) even in the most intense moments. On the other hand, my OriginPC laptop continues to impress, barely moving the needle at just 12% of my CPU and 9GB of my RAM at 4K / 30fps during capture. A powerful video card doing the heavy lifting makes a world of difference, it seems.

Multi-Stream – the power of RECentral 4

I beat up RECentral in previous reviews as I had a few issues with lost streams, crashes, and other hiccups with the fledgling software. Well, AVerMedia has put a lot of work into their flagship software since then, and it shows. During testing, I encountered zero crashes, bugs, and found a lot of quality of life improvements. Let’s start off with the basics.

If you are a streamer, you are probably comfortable using OBS — it’s the defacto standard. If you are not a streamer, or you are not interested in fighting with setting up OBS, then stick around, I might just have an alternative. RECentral’s main window is essentially split into two sections that we’ll subdivide by the two stream types — single and multi. Single simply takes whatever is being pumped through the device and captures or streams it as you see fit. In fact, if you have the bandwidth, it will even multi-stream it. This means you can send to Twitch, YouTube, UStream, niconico, Facebook, Smashcast, Mixer, Douyu.com, and any other generic RTMP stream source you can aim at, simultaneously. Better still, you can save your stream as a backup with a single click so you can use it later, even saving it at a different resolution than the one you are streaming, if you wish.

Setting up your stream is incredibly simple. Pressing the + symbol in the lower left box lets you add a device, screen capture, video, image, text, or website to your available screen space. This lets you create as cluttered or as clean a stream space as you see fit. If you want to simply put a video stream of your webcam in the corner and resize it, click the + and select device, then your webcam. Resizing it is as easy as dragging it to position and pulling at the edges to fit the needed size — RECentral does all the rest of the work for you. If you embed objects, such as a second video, webcam, or audio source, these objects have their own discreet audio controls, which is handy for balancing them out on the fly or setting them ahead of your stream.

If you are planning out an entire event, RECentral also lets you set up your scenes ahead of time. This means you can set up your intro, which may have certain specific elements, a screen which lets you show your Patreon, followers, website, webcam, or whatever else you might want to display, another that zooms in on just your game, one that lets you take a break and sets you to “away” status, and pretty much any others you might have in mind. Switching scenes is as easy as a single click, as long as you think ahead. As you can see below, you can get as cluttered and ridiculous as you want, so exercise some caution…less is more.

There are two caveats that the AVerMedia Live Gamer Ultra leaves on the table — the lack of HDR and 60fps support. The GC573 Live Gamer 4K card is meant to be placed inside of a full PC, so it hits a bit of a different audience, with a less portable application, but if those two items are important to you, then I encourage you to check out my review on that piece of hardware that was released at the same time as the AVerMedia Live Gamer Ultra. You can read my review on that card right here.

After a week of the most intense testing possible, I came away impressed with the AVerMedia Live Gamer Ultra. It improves on its predecessors in every way, providing new highs in both resolution and framerate in a portable form factor. It does require a bit more horsepower to drive all that improvement, and it still can’t handle 60fps or HDR, but the results beyond those two caveats are undeniable, and at a very attractive price.

Ron Burke is the Editor in Chief for Gaming Trend. Currently living in Fort Worth, Texas, Ron is an old-school gamer who enjoys CRPGs, action/adventure, platformers, music games, and has recently gotten into tabletop gaming. Ron is also a fourth degree black belt, with a Master's rank in Matsumura Seito Shōrin-ryū, Moo Duk Kwan Tang Soo Do, Universal Tang Soo Do Alliance, and International Tang Soo Do Federation. He also holds ranks in several other styles in his search to be a well-rounded fighter. Ron has been married to Gaming Trend Editor, Laura Burke, for 21 years. They have three dogs - Pazuzu (Irish Terrier), Atë, and Calliope (both Australian Kelpie/Pit Bull mixes).
Related Articles: AVerMedia Live Gamer Ultra, Hardware
Share
Tweet
Share
Submit