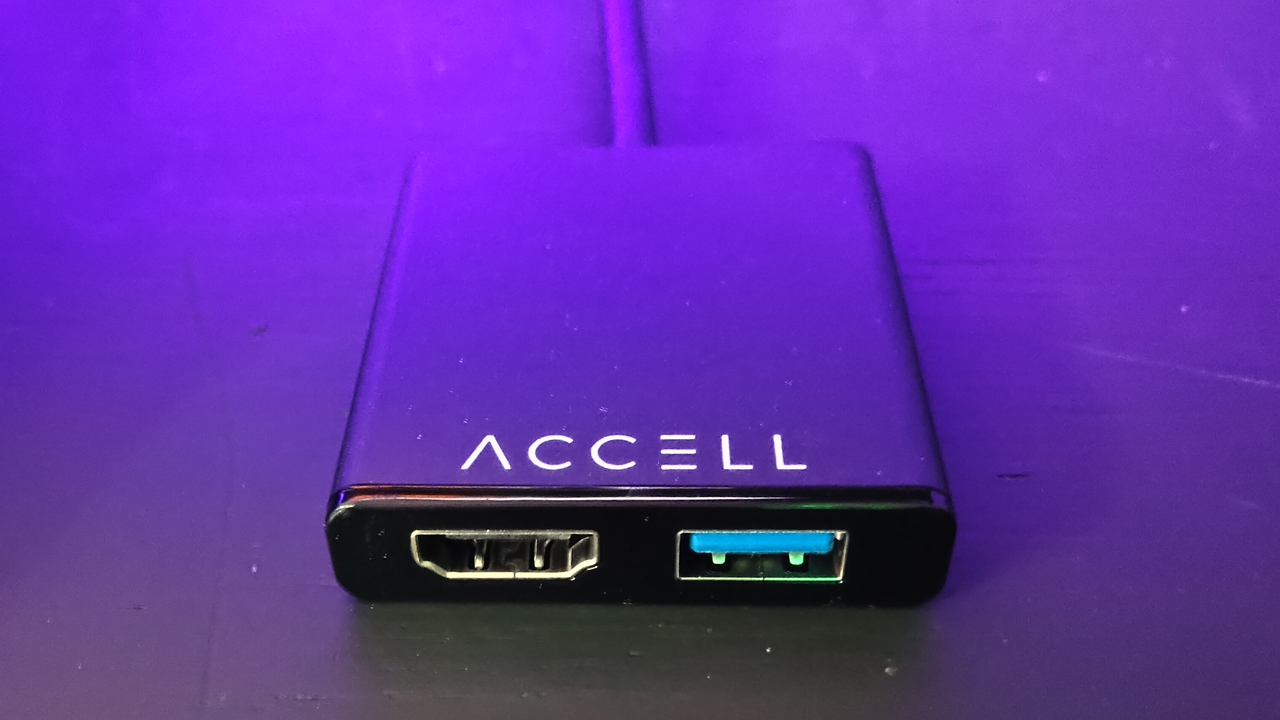 If you’ve been reading Gaming Trend for a while you’ve likely noticed that I have a serious love of virtual reality. There is one thing that I have to readily admit that prevents it from becoming as mainstream as it could be — the constant fiddling that goes on with ports on the ass end of the machine just to hook things up to play. Most people, myself included, don’t leave their VR gear hooked up at all times. Given that the Oculus Rift requires two USB ports for the cameras, as well as a third USB port and HDMI for the visor, it’s a lot to fiddle with. On top of my PC case the USB ports work beautifully, but I’m more than tired of pulling out the whole system to plug cords into the back of the video card. As they’d say in a late night infomercial “There has to be a better way!” Enter the USB-C VR Adapter from Accell.

NVIDIA’s newest video card platform, the 20XX series, tackles this issue head-on with a brand new port. Well, it’s a familiar port as it’s USB-C, but it serves as a dedicated port for virtual reality and any other USB-C functions like hubs, charging, and USB-C monitors just to name a few. This port has an open industry standard called VirtualLink baked into the USB-C port that has a simple pair of objectives — consolidate two large cables into one small one, and with enough bandwidth to handle virtual reality in its current form, and with a bit of futureproofing. The port can support four lanes of HBR3 DisplayPort displays (which is to say 8K UHD (7680 × 4320) at 60 Hz or 4K UHD (3840 × 2160) at 120 Hz), USB 3.1 Gen2 (up to 10Gbps throughput) and at only 27 watts of power. It’s an impressive improvement on the technical side of things, and should be able to provide 4K to each eye at 90+fps in the next generation of VR headsets with headroom to spare.

Back to the Accell VR Adapter, it takes advantage of this new port and gives it precisely what it needs — a long tail. With an eight foot cable attached, it connects to the rear of your 20XX card, providing a USB 3.1 and HDMI port on the other end. This gives you what essentially amounts to a breakout box that can be placed on the top or side of your case, or wherever else is convenient. It also extends your play space as you are given an extra eight feet of cord length on top of the thirteen feet of cable on the Rift HMD. More freedom is always a good thing. 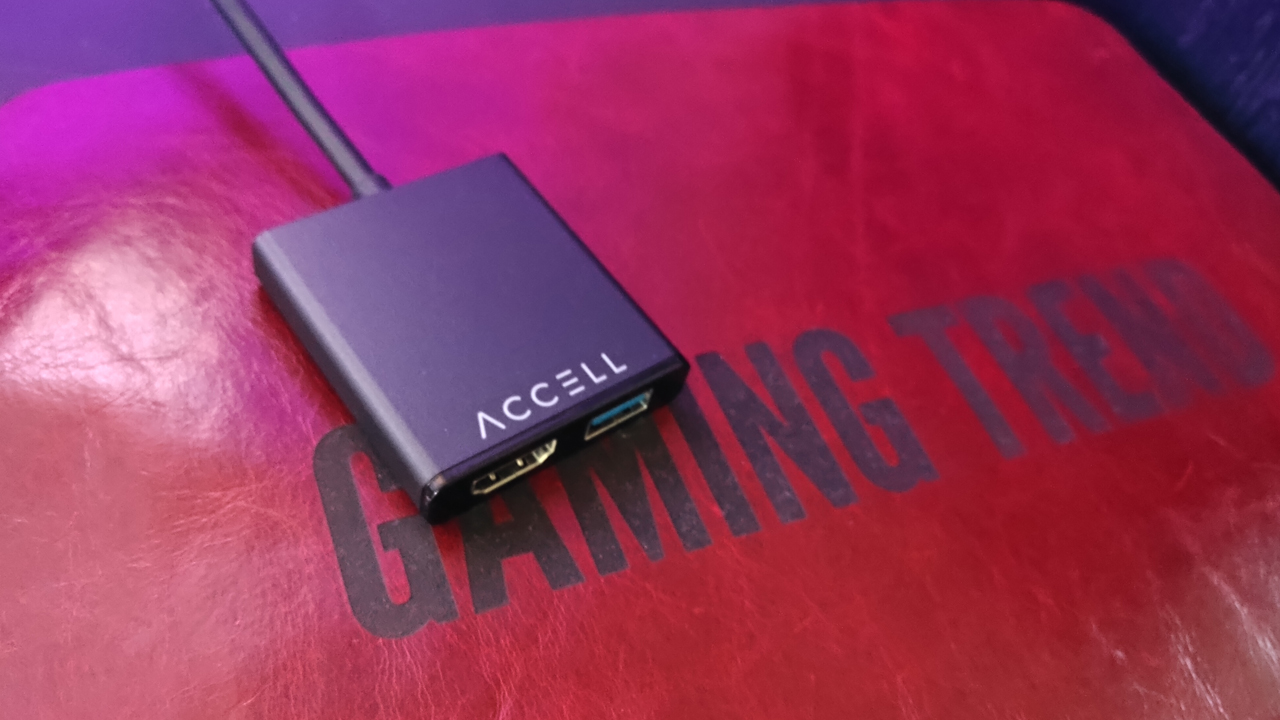 I was pleased to see that the Accell VR Adapter doesn’t require any driver installs to work. Entirely plug-and-play, it is immediately recognized by Windows and utilizes the built-in USB drivers present in the operating system.

When adding cord length, and when VR tolerances can mean the difference between an enjoyable adventure and a head-spinning trip to the couch to lie down, it’s important to make sure that you’ve not added any latency or framerate loss. Through an entire week of testing with games like Beat Saber, Robo Recall, Sairento, and The Wizards, I didn’t experience any issues whatsoever. The additional distance let me move a little further away from my PC without any loss in fidelity or performance.

The PC in my living room gets a lot of use. It’s my VR rig, my wife uses it for music production, and it also handles the heavy lifting for video rendering. Every time I pull it out I worry about cables getting tangled, broken, or just issues from jostling the spinning disk hard drive used for storage. With this USB-C VR Adapter, I can now leave my PC safely in place, putting my VR gear away and connecting it at will.

There are a few minor complaints with the adapter. The price comes in at $49.99 which is a bit of a steep hill to climb. Additionally, the device tends to get very warm. As you likely know, heat is the arch-nemesis of electronics, so you might be mindful of where you place it. The last issue is one you may need to pay a great deal of attention to — compatibility. While this is a truly plug-and-play device, that only applies if you have a video card with a VirtualLink USB-C port, specifically. This limits the desktop range to NVIDIA’s new RTX line (sorry AMD), and a small list of laptop manufacturers with a dedicated USB-C DisplayPort Alt-mode. The way laptops often architect their CPU and GPU graphical pipelines to use their built-in Intel GPUs instead of the secondary NVIDIA GPU is the culprit. It’s a frustration, but it’s a design flaw of the laptop design, and no fault of Accell, so I can’t knock them for it.

The Accell USB-C VR Adapter does a fine job of providing a breakout box for VR, provided you have a video card with a USB-C port on it. NVIDIA’s newest desktop video cards carry this port, making this adapter a must-have to reduce the amount of fiddling behind your PC. That said, be mindful of which cards are compatible. If you are on the list, it just works.

Ron Burke is the Editor in Chief for Gaming Trend. Currently living in Fort Worth, Texas, Ron is an old-school gamer who enjoys CRPGs, action/adventure, platformers, music games, and has recently gotten into tabletop gaming. Ron is also a fourth degree black belt, with a Master's rank in Matsumura Seito Shōrin-ryū, Moo Duk Kwan Tang Soo Do, Universal Tang Soo Do Alliance, and International Tang Soo Do Federation. He also holds ranks in several other styles in his search to be a well-rounded fighter. Ron has been married to Gaming Trend Editor, Laura Burke, for 21 years. They have three dogs - Pazuzu (Irish Terrier), Atë, and Calliope (both Australian Kelpie/Pit Bull mixes).
Related Articles: Accell USB-C VR Adapter, Hardware, VR
Share
Tweet
Share
Submit