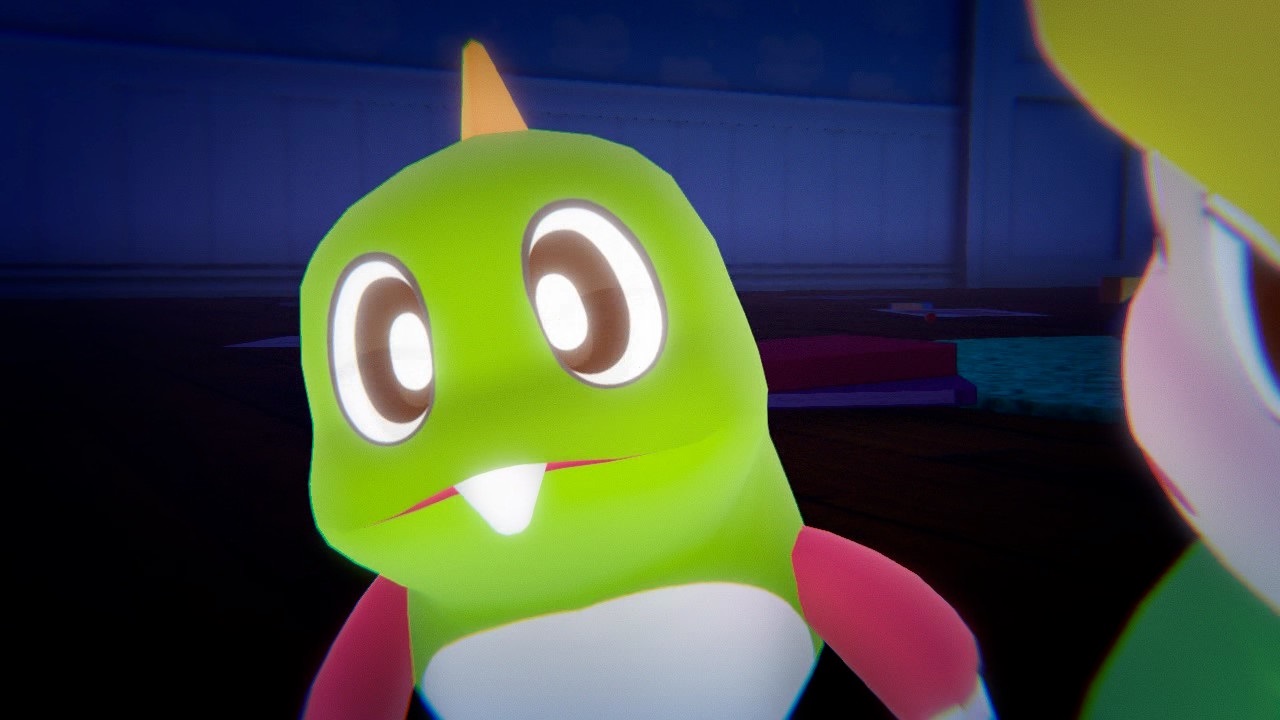 Bubble Bobble has always been a strange game for me. You blow bubbles onto enemies then pop them with the spikes on your cute little dragon back. Ever since its first iteration in arcades in 1986, it has allowed you to play with a partner, but Bubble Bobble 4 Friends tries to take things a step further by allowing you to play with up to three other friends. But is this enough to justify the game’s price point? 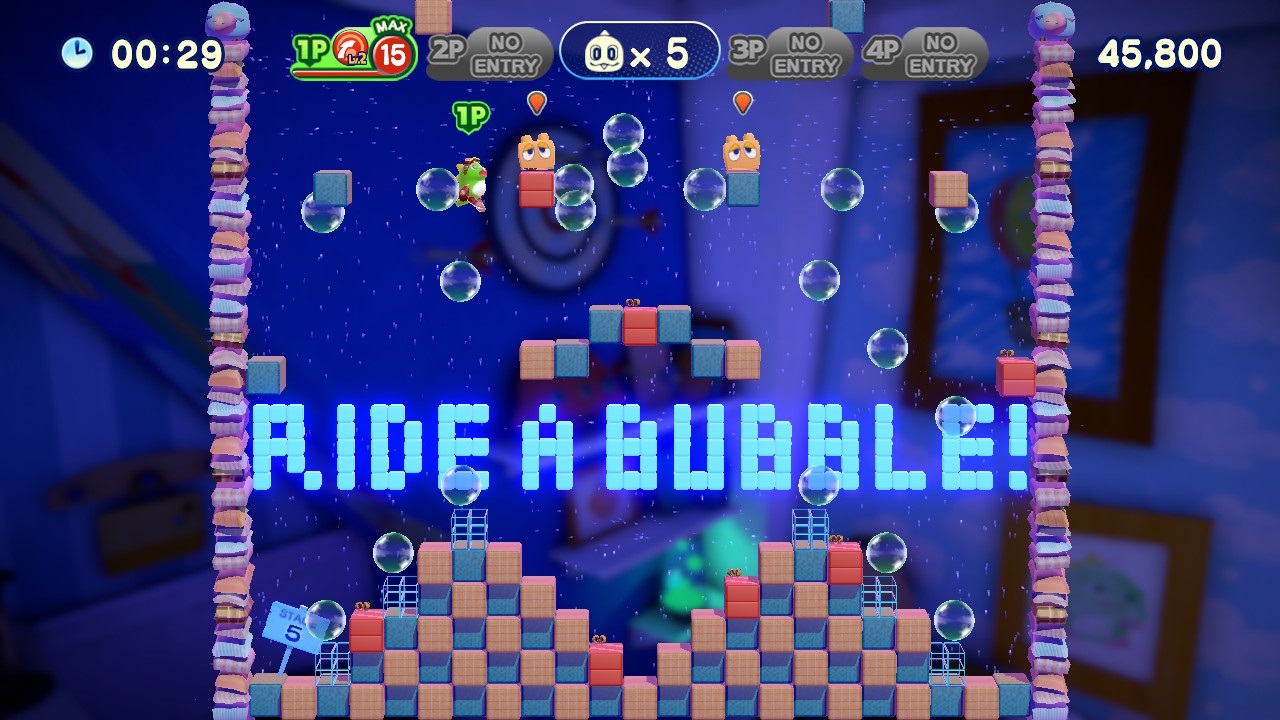 Instead of going through all of the motions and laying down what’s offered first, I’ll give you the answer now: it is not. Bubble Bobble 4 Friends can be best described as “expensive squandered potential.” It takes the standard idea of Bubble Bobble and changes things up a little. You’re given different worlds at the start of the game that you have to run through, each containing nine levels leading to a boss at the end. The gameplay is almost as simple as the original release, where you blow bubbles to trap enemies and pop them by running your spikes into them or pressing down while you jump on the bubble. Jumping on the bubble is a new feature, as it allows you to reach higher points of the level and can lead you to satisfying situations. 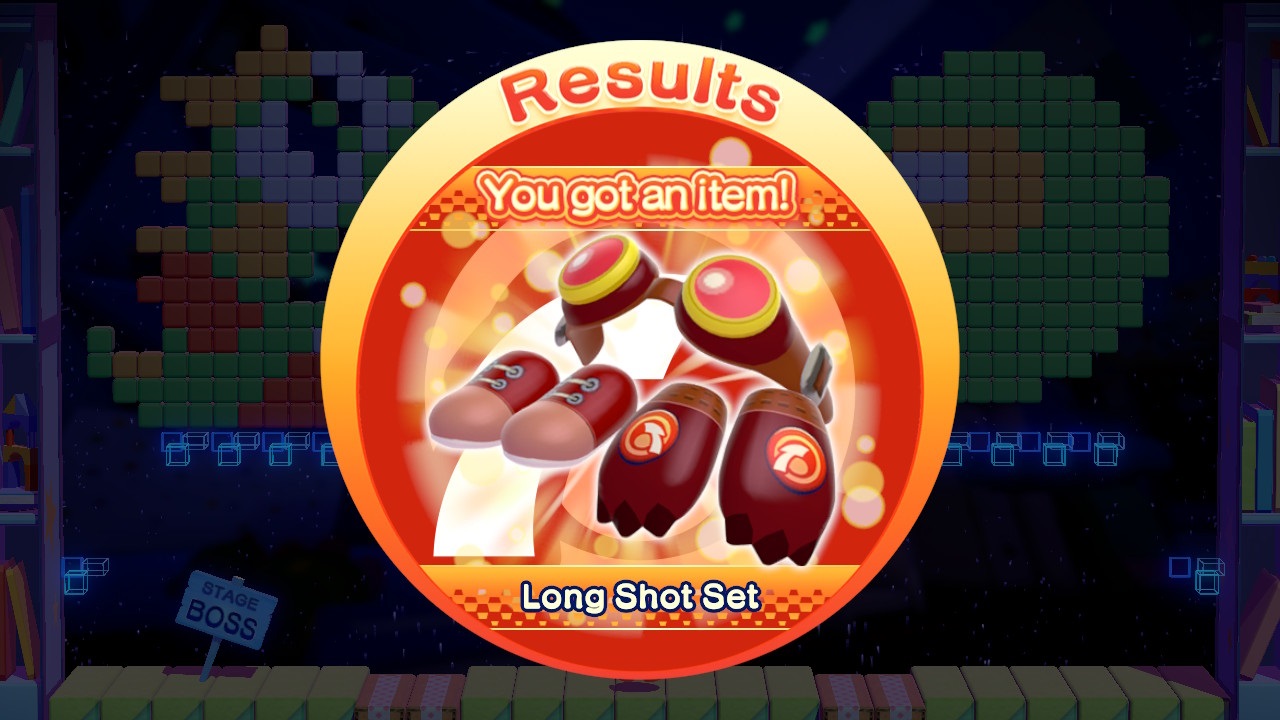 Bubble Bobble 4 Friends adds one more element that’ll change how you play significantly: For beating a world you’re given a new ability. You can only pick one at a time, but by pressing the shoulder buttons you can use this ability, be it a bubble that zaps everything to the side of it, or dashing through enemies. As these abilities are limited and recharge by gaining fruit, I found the dashing and the long shot abilities the most useful as they have more uses before they’re exhausted.

These abilities can be expanded by finding all of the “EXTEND” letters in a world. These letters are trapped in bubbles that go away after a set period of time, so some may be frustrating to reach. Since the reward is only giving you more uses for your abilities, it’s not worth it for every world if you don’t plan on equipping that specific ability. 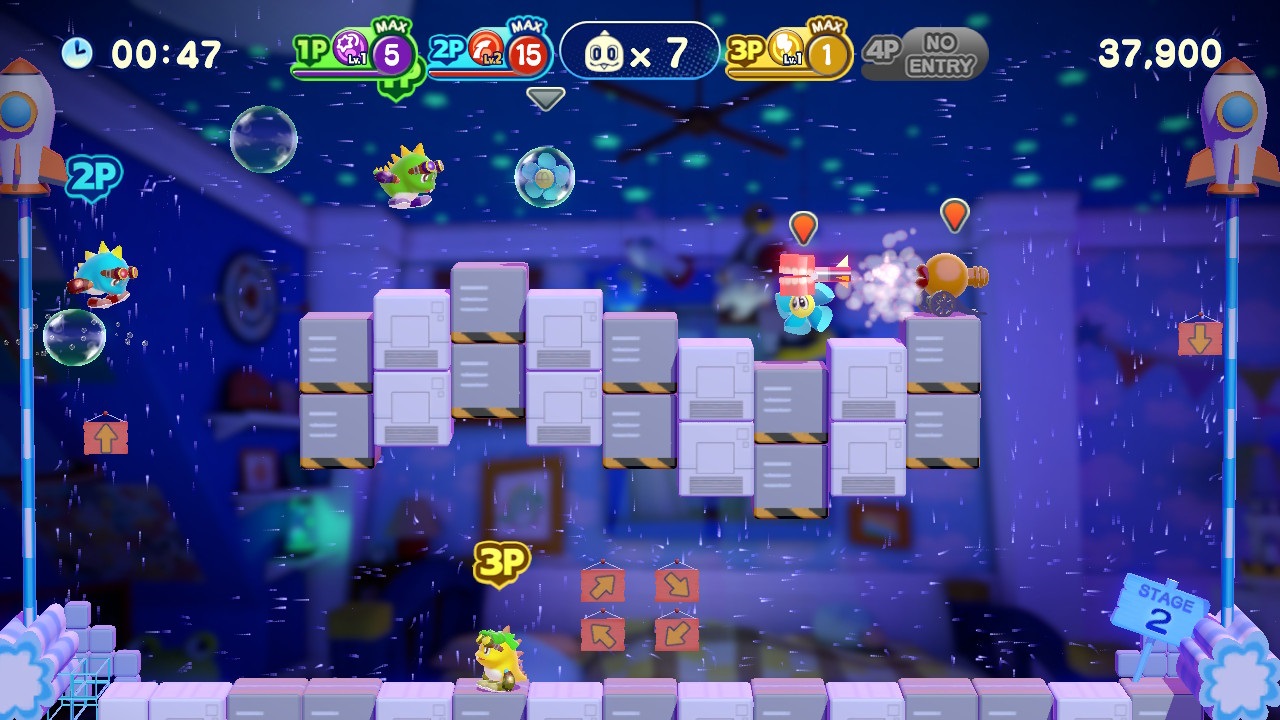 The biggest draw for this game is the multiplayer, which is why it’s called “Bubble Bobble 4 Friends.” You can play with up to three other players (get it? “4” friends?) to cooperate and clear all of the enemies off the screen. However, despite this being the main draw of the game, the addition of other players doesn’t add much value to the game overall. Many of the levels have a linear progression where you have to take a specific path to take out all of the enemies, which makes splitting up nearly impossible. None of these levels even change with the inclusion of more players. 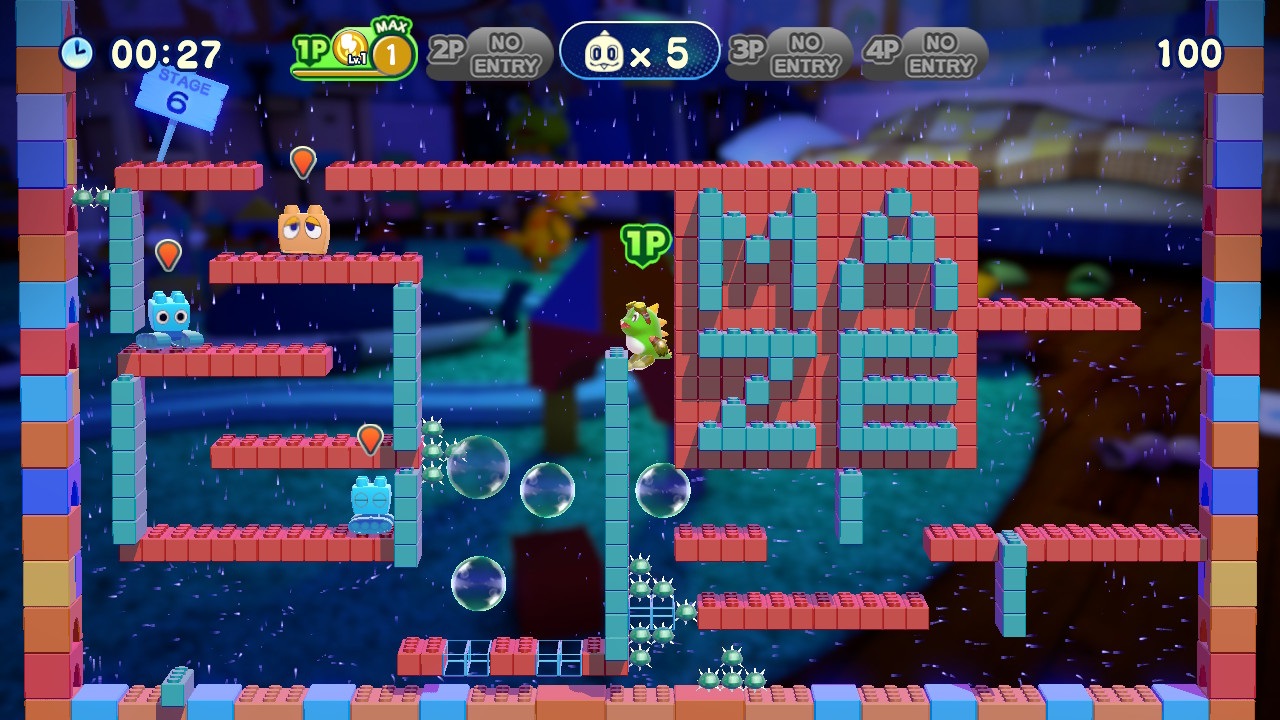 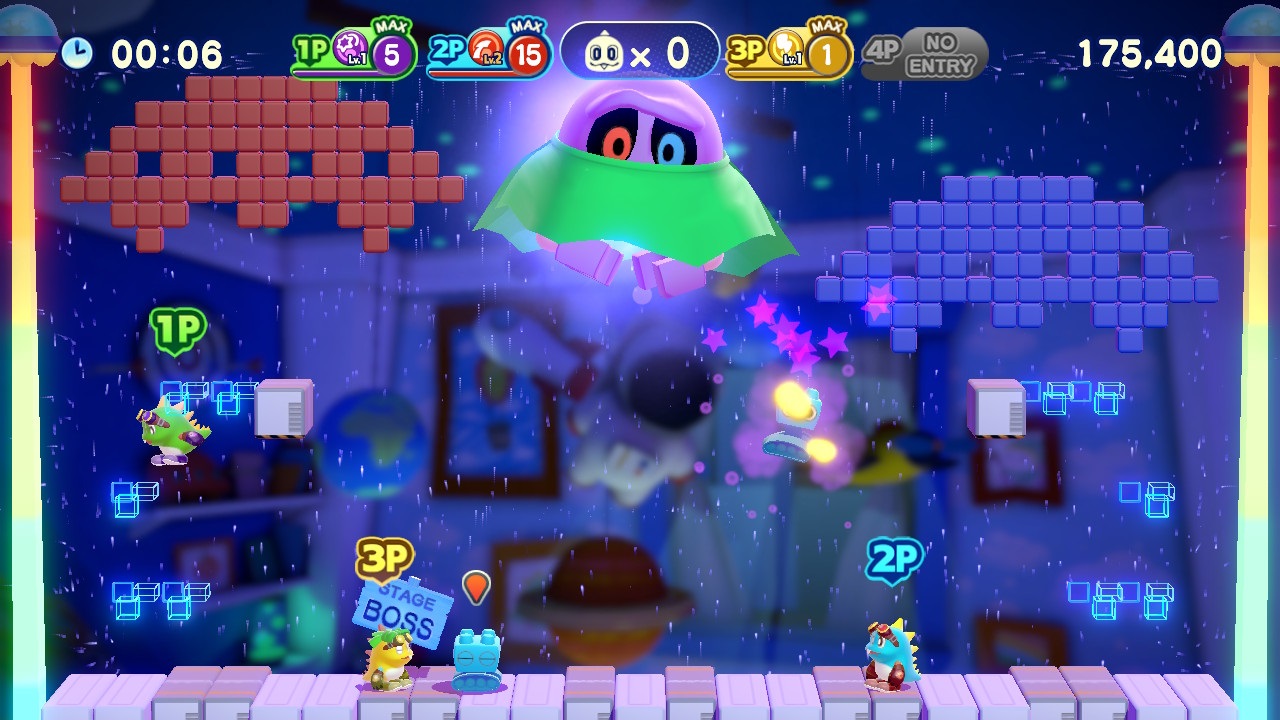 The level design is wildly inconsistent. While there will be times it uses the bubble jumping mechanic well and even some of the new abilities, it never finds a good middle ground to mix these elements. Difficulty in each level ranges from ridiculously easy to unfair by placing enemies in inconvenient locations grouped together. But at least you have more control when you’re against smaller enemies. Against one of the five bosses, you’ll often find yourself in positions where you’re unable to avoid their attacks. 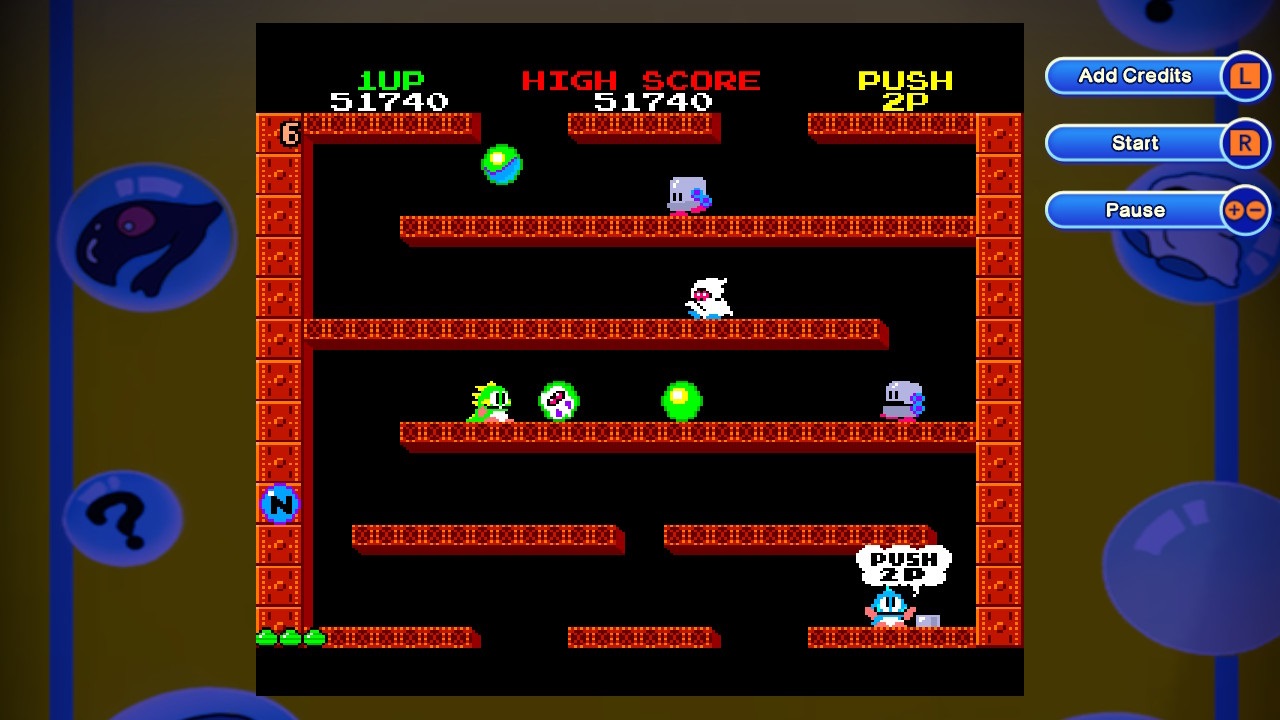 When I heard that this game had 100 levels (200 with the inclusion of the original arcade version of Bubble Bobble), I was excited. What I didn’t realize was that each level was going to be less than a minute to complete. While the latter half of the levels are in a so-called “hard mode,” they don’t justify the game’s length for its price. If it were a $10 game, it’d be a fun distraction with a few friends for a night or two. However, this game is $39.99, which is asking a lot for a few hour long arcade-style game without even so much as a leaderboard.

I cannot recommend Bubble Bobble 4 Friends unless you are a hardcore fan of the series bent on owning every release. It offers far too little for the price and lacks the polish and love it needed to be a legendary installment.

Bubble Bobble 4 Friends fails to bust a move and find any justification for its high price point. It lacks in length, it lacks in features, and even lacks a leaderboard, an oversight for this kind of game. While it is an enjoyable title with a few friends, there are plenty more affordable multiplayer arcade-style games available for even a quarter of the price.

Sean Anthony likes to combine two of his passions: gaming and writing. Gaming has been a huge part of his life ever since he played his first game as a child, Kirby's Adventure. He aspires to have his name attached to an article that makes the whole world go, "Huh, that's neat, I guess."
Related Articles: Bubble Bobble 4 Friends
Share
Tweet
Share
Submit