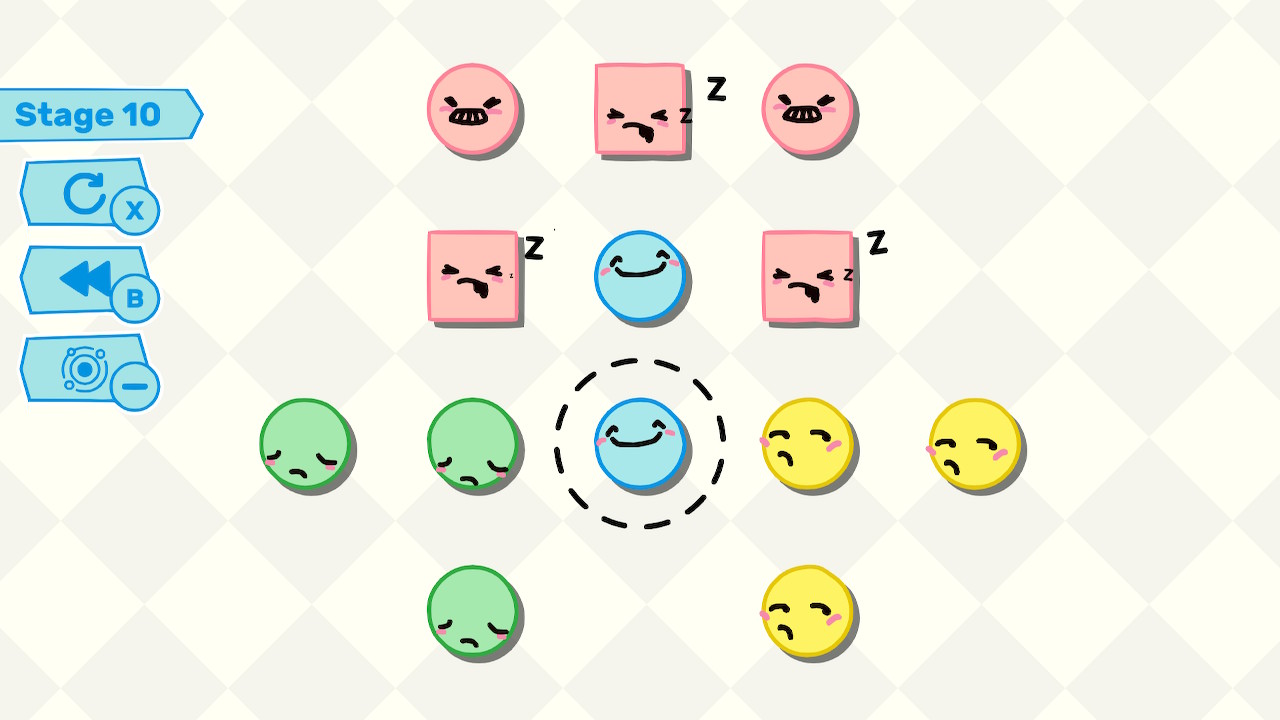 Puzzles come in many forms, whether they be rearranging numbers, following specified paths to reach a goal, matching colors to clear a board, and so much more. Yuso takes an interesting approach to the concept of clearing the screen by matching colors, and it does it well.

Yuso is a charming puzzle game that involves the player traveling the solar system in order to deal with the Yuso invasion. Yuso are round, adorable creatures that come in a variety of colors. They don’t look like much of a threat, but apparently they have arrived on multiple planets in massive numbers. Apollo shows up early on and explains that he was originally tasked with dealing with the Yuso, but was unable to get rid of them. In fact, it turns out that the player is the only one with the ability to destroy them, so Apollo pushes his job onto you. As a result, you’ll be moving from one planet to the next as you complete the ten levels on each planet.

Now, let’s get into the basic gameplay of Yuso: clearing the screen by matching colored blobs. In order to pop a Yuso, you need another Yuso directly next to it, either above, below, or on the side. Being diagonal to each other doesn’t allow you to pop it. That being said, when you pop a Yuso, all others of the same color next to the target will be destroyed as well, even the diagonally adjacent ones. Any adjacent Yuso of a different color are shaken and converted into the destroyed one’s color. So if you pop a yellow Yuso next to a red one, then that red Yuso becomes yellow. This means that you need to take these color changes into account as you plan out your moves. In addition to those rules, Yuso can’t be popped alone; if they are completely separated from the others, then you made a wrong move.

Speaking of wrong moves, there is a great feature included to help with that: the rewind button. Like other games, there’s the retry button if you want to restart the level, which is a viable option. I personally prefer the rewind button, which allows you to take back as many moves as you want. There’s no limit to this, so feel free to take advantage of it as much as possible — I know I did. Let’s say you want to see what happens if you pop a certain Yuso; try it out, and if you don’t like the results, just hit rewind and make a different move. Being able to rewind at will actually helped me get through some levels quicker.

Popping blobs to clear a screen sounds too easy at first, so why not add some hindrances? These come in the forms of bombs and nightcaps. The bombs are colored, just like the Yuso, and after their timer hits zero, they explode. Funny enough, they function similarly to the Yuso; nearby Yuso of the same color get destroyed, while other colors get converted. The nightcaps on the other hand, are purple, but don’t affect any colors differently. When their timer hits zero, they explode, changing all surrounding Yuso to squares, and putting them to sleep. The sleeping Yuso can’t be used to pop others, but they count as adjacent Yuso in order to allow an awake one to be used. Popping a Yuso, no matter what color it is, will wake up any surrounding sleepers. The same thing happens when a bomb explodes near sleeping Yuso. The one difference in this case is that the sleeping Yuso don’t change colors upon waking up, which means you’ll need another move to convert them if that’s your goal. This adds yet another obstacle to deal with as you fight to clear the screen.

One nice thing is that unlike some other games, Yuso’s progression is open-ended to a degree. In order to unlock the next planet, you don’t actually need to beat every level on the previous planet. The locked planets all have a specified number of levels that need to be completed in order to unlock them, so as long as you achieve that goal, then that planet will unlock. This means that if you get stuck on a level, you can skip it and come back to it later on. I appreciated this because I had a few situations where I couldn’t figure out how to clear a level. I was able to make my way through other levels and come back to the skipped ones after I felt ready to retry them. The idea of taking a break on a difficult level and returning later, only to find it easier to complete rang true in several cases here.

As you play through the game, you’ll meet a quirky cast of characters, all eagerly waiting for you to eliminate the Yuso. There’s only one ally per planet, and they only show up twice: when you arrive on the planet, and after you’ve completed all ten levels. I was a little disappointed that we didn’t get to see more of them because it felt like they could’ve been built upon to create more fleshed out characters. This doesn’t hurt the game at all, it’s just an idea that could’ve potentially added a bit more charm.

That being said, Yuso is definitely not lacking in that department. From the relaxing music to the lightly shaded backgrounds, Yuso is covered in a calm, soothing atmosphere. Sure, some of the levels can be difficult, but never to the point of being infuriating. Any time I started to get annoyed at not being able to solve a puzzle, the adorable Yuso floating there ended up putting a smile on my face. The fact that you can easily pick up and play at any time adds to the relaxing vibe that it gives off.

In the end, Yuso is a wonderful puzzle game that feels perfect for casual puzzle lovers. It offers a good challenge without being overly difficult, although some levels may stump you at first. The simple premise and gameplay, along with the relaxing nature of the world, keeps the player feeling at ease while they play. The only downside is that it takes only a few hours to beat, but it’s easily worth that time.

Yuso offers a charming puzzle game experience that can be enjoyed at home or on the go. There's a nice challenge to the levels without being irritating. The atmosphere of the world and levels create a peaceful space for players to enjoy for awhile. It isn't long, but it's definitely worth your time.

Codi loves to play video games and watch movies. He will watch almost any kind of movie just to experience them. His ideas take inspiration from the shows and movies he watches, and games he plays. He also loves a good pun.
Related Articles: Yuso
Share
Tweet
Share
Submit