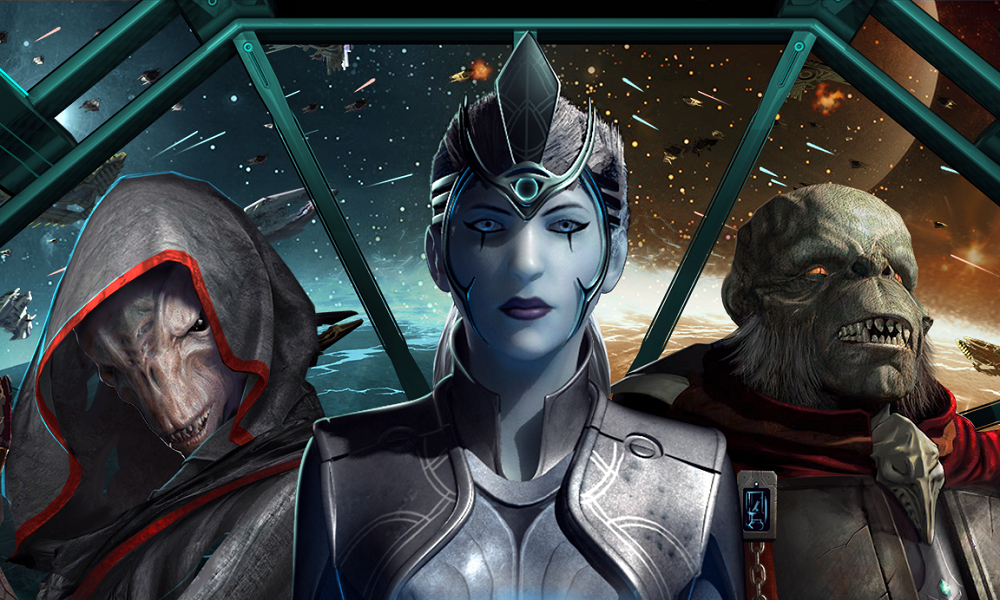 I’ve had a busy day. Today I’ve established a trade route to a new planet, finished training a new scientist to aid me in my research, started mining a new ascension crystal, and lost a planet to the ruthless Iridium Corporation. What awaits me afterwards, however, is a new challenge. Tomorrow is election day, and I’m no longer projected to win by a landslide.

Elections are a new feature in Galactic Civilizations III, the 4X (explore, expand, exploit, exterminate) game focused on building a galaxy-wide kingdom, and these elections are one of the key components of the “Intrigue” expansion. While this was my first time jumping into the universe of Galactic Civilizations III, I will be focusing on the features Intrigue includes, which are primarily related to government and the integration of a new crisis system.

Something has to be done about those “Homeland First” people.

First and foremost, these new governments are a game changer. There are 20 governments to choose from with only 2 available from the start. As you progress in the game, more tech will open up new governments. Each government brings a different set of pros and cons, and they seemed fairly balanced. There are definitely “late game” governments that can be unlocked near the end, with lesser impacting governments being available sooner, but these are good for early game if you have a good understanding of which one to choose.

For example, I wanted to eventually become a Technocracy, as my planned victory condition was to research enough to be able to build an ascension gate, but that required tech farther along, so I spent a great deal of time in an Interstellar Republic, waiting for the day I can change out governments.

This was a good start to get a jump on my research.

To avoid cheating the system and only getting the benefits when you need them, Galactic Civilizations III: Intrigue locks the player to 26 in-game weeks (turns) before they can change their government, but this also applies to the first two governments available.

In order to keep control over your empire’s government, you need to win elections. These elections are determined by the morale held by all of your planets. In this expansion, you have the ability to tax these planets. If you tax them too much, your approval rating will decline. And, if you lose an election, you will become a Coalition Government and lose any benefits of your government. Keep your people happy, King. However, you will be notified ahead of time of your odds of winning the election.

Good. If I don’t win, they’ll be found in a landslide. I can promise you that.

Being given vague information is half of the fun of Intrigue. In this expansion, the Galactic News Network (GNN) will often give news bulletins on various events around the galaxy. These are usually just rankings of planets or notices of achievements other civilizations have accomplished. It’s basically a more flashy way of presenting information already presented in other ways.

GNN isn’t the only way you’ll learn about events. Intrigue brings new special events that can drastically change your course of gameplay. For example, one of these events explained that an enormous space monster was spotted outside my solar system. I could either contact it for benevolence points, leave it alone for pragmatic points, or attack it for malevolence points. Because I believe that every monster deserves a chance, I reached out to it. This, of course, led the monster enroute to one of my planets. Here I was given several options on what to do with this situation, with the possibility of succeeding changing depending on far along I was in a specific skill such as science or how good my military was.

I lost. One of my planets was destroyed by the space monster. All of the production and money I put into the planet were lost forever due to one terrible mistake. In a way, this was exciting to see, but I can see how it’ll be frustrating, especially since these events can’t be shut off yet, and can feel unfairly random.

They can lead to great feeling triumphs when you succeed.

Another addition is the Galactic Market. Instead of having to trade for materials, you can buy them directly from the market. The prices for these materials changes depending on how scarce they are in the universe, making it balanced for anyone trying to purchase an end-game resource. This is a welcome addition, as it promotes gathering wealth instead of floating above the line of deficit.

The last addition to Intrigue is something meant to be useful when planning your government. Each form of government has a restriction on how many planets empires can have. The solution to this is to make one of your planets a Commonwealth. As a Commonwealth, they act as their own empire, but will remain loyal to you. This concept is interesting and it creates a good strategy of keeping power against your opponents. However, there is one issue with them.

Not even twenty turns after creating my Commonwealth, they already went to war with a nearby empire. Of course, with me wanting nothing to do with that nonsense, I stepped away from the conflict and watched as the New MFNs were completely eradicated by the Iridium Corp, which I then proclaimed a declaration of friendship. This wasn’t the first issue with Commonwealth. When you completely give up control of your planet, their wants will not align with yours. They become the annoying smaller cousin you’re tasked with babysitting.

Besides the Commonwealth being a good idea with less than ideal outcomes, Intrigue is a solid expansion. Governments are well balanced, commonwealth, though often lacking intelligence, are a neat idea, GNN is an entertaining addition, special events are exciting, and the Galactic Marketplace is good for any players hoping to save time on resource gathering.

Intrigue allows players to choose from 20 governments each with their own perks, special events that can reward unique ships or even destroy one of your planets, and is primarily a positive game changer for Galactic Civilizations III. Commonwealth are a neat idea, but sadly end up becoming more of a nuisance than an ally.

Sean Anthony likes to combine two of his passions: gaming and writing. Gaming has been a huge part of his life ever since he played his first game as a child, Kirby's Adventure. He aspires to have his name attached to an article that makes the whole world go, "Huh, that's neat, I guess."
Related Articles: Galactic Civilizations III: Intrigue
Share
Tweet
Share
Submit