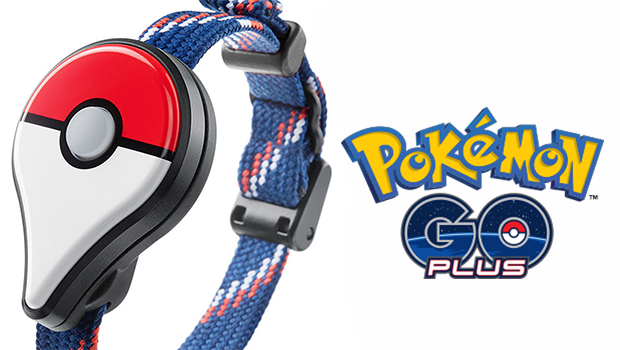 With the success of last year’s Pokémon GO, many trainers have been anticipating getting their hands on the promised supplementary wearable. While the Pokémon GO Plus isn’t a game-changer, it does provide fans of the mobile title with a host of features, and can effectively alter the way you play the game. This device costs $35 (if you can find it in-stock) and connects to your cellphone via bluetooth. The Plus will light up and vibrate whenever you come in range of a Pokéstop or encounter a wild Pokémon. Pressing the button will cause the Pokémon GO Plus to spin a nearby Pokéstop, adding items to your inventory, or attempt to capture a Pokémon. The Plus will also count your steps, adding kilometers to the distance walked to hatch Pokémon eggs and to collect buddy candy while your phone is locked. It sounds simple enough, but there’s actually a good bit going on with the Pokémon GO Plus, so let’s break it down.

One of the biggest selling features of the Plus is that it will track your steps, even when your phone is locked and put away. While the Plus still draws a bit of battery due to the bluetooth connection, it saves a tremendous amount compared to keeping Pokémon Go open and using the built-in Battery Saver feature. In order for the Plus to work, your phone must be on and Pokémon Go must be running, but the app can moved to the background, and the Plus will continue to work while your phone is locked. While there really isn’t a good reason why Pokémon Go shouldn’t be able to track your steps while running in the background on its own, purchasing either the Pokémon Go Plus or an Apple Watch seems to be the only method to unlock this feature for the time being.

The Plus streamlines the way you play Pokémon GO

The ability to be alerted to nearby Pokémon and Pokéstops, combined with the ability to try and catch Pokémon, or spin a Pokéstop with one click creates an entirely different Pokémon Go experience. You no longer need to be hunched over a cellphone, playing with your balls unless you want to be. A quick vibration and a flashing LED lets you know what you’re approaching (blue for a Pokéstop, green for a Pokémon you’ve previously caught, and yellow for a Pokémon not yet registered in your Pokédex), and after a press of the button, a combination of flashes and vibrations will inform you of success or failure. The Plus will also send a notification to your phone to let you know how many items you collected, if you caught a Pokémon or if it fled, as well as alerting you of issues such as a full Pokémon Box or Bag.

This convenience comes with a few drawbacks and special mechanics, especially where catch rate is concerned. The Plus has become notorious for its low catch rate due to several factors. First, the Plus can only use use regular Poké Balls. Great, Ultra, and the fabled Master Balls do not exist so far as the Plus is concerned. There is no way to program the Plus to use any other kind of Poké Ball, and if you run out of regular Poké Balls, the device will be unable to catch a Pokémon, even if you still have Great or Ultra Balls in your inventory.

The Plus flashes different colors depending on what you encounter

While some unlucky players have reported the catch rate to be as low as 20%, data shows that the catch rate is actually closer to a 50%, and the good news for new players is that the catch rate is actually higher for lower level trainers. While actions performed by the Plus do count towards your Daily Bonus, the Plus is unable to throw Curve Balls, and also unable to score bonuses for Good, Great or Excellent throws, so you won’t be getting any of the bonus experience for your mad ball handling skills. The Plus also has a strict policy of one-ball-per-Pokémon, unlike the app itself, where Pokémon who break free of a thrown ball may not immediately flee.

Does this low catch rate make the Plus worthwhile? Well, that largely depends on the kinds of Pokémon spawns around you. While playing in a very rural area, I would see maybe two Pokémon a day, unless I drove to a more populated place. In that situation, I absolutely ignored the Plus and opened my phone to use every tactic at my disposal to increase the odds of securing those catches. Playing in the city proved to be a different experience altogether, as Pokémon spawn pretty constantly, and often pop up in small, clustered groups. In this situation, I may only be able to catch two or three Pokémon by manually throwing balls before moving out of range of the group. The quick pace of the Plus meant that I was able to attempt to capture six or seven Pokémon before moving out of range, and while the Plus may have missed half of them, I would still end up capturing three or four Pokémon, a net gain over playing traditionally.

All of the above features are dependent upon getting the Plus to connect and stay connected to Pokémon GO, and this is, by far, the greatest weakness of the Plus. The connection is not terribly stable, and will often drop when you least expect it. Usually when this happens, your phone will send you alert telling you that your session has ended. Reconnecting is a simple matter of opening the app, tapping the Plus icon, pressing the button on the Plus itself, and voilà! You’re connected again. There doesn’t seem to be a solid rhyme or reason as to why this happens; sometimes the Plus would remain connected for hours without any problem, while on one day in particular, my connection failed out three different times on a single city block.

The Plus will also occasionally drop a connection without notifying your phone. This can be incredibly frustrating, as you have no way of knowing how long you’ve been without the game running. This also requires you to go through a mini ritual in order to make your Plus connect to your phone again. When this kind of connection failure occurs, phones will still be able to locate your Pokémon GO Plus, but will be unable to connect to it. You need to unpair the Plus from your phone by either removing the battery, which requires a screwdriver, or holding down the button until the Plus turns blue, then releasing and quickly holding it again until the Plus vibrates. The connection loss between phones and the Plus is frequent enough to be a real concern for many trainers. My iPhone 5 had a great deal of trouble maintaining any kind of a connection, though that could well have been the fault of a very old phone, as the connection was still spotty, but considerably more stable when I switched to an iPhone 7.

My favorite feature by far is the ability to use the Plus to catch wild Pokémon while evolving a Pokémon. It may be a small feature, but when level ups become several hundred thousand experience points apart, every little bit counts, and there is an overwhelming desire to squeeze every second out of each Lucky Egg. Mass evolving as many Pokémon as possible during a 30 minute double experience window can be frantic, and grabbing that extra 200 xp from lure Pokémon while staring at the evolution screen is incredibly rewarding. It may not be game changing, but it’s still nice to see the app and the Plus complement gameplay in this way.

The Pokémon GO Plus is not very useful for building a good team, as the Pokémon it is best at catching are both common and low CP, but it is a great tool for harvesting stardust, candy, and experience points. I’ve managed a few surprising catches with my Plus, including two Ditto, several Holiday Pikachu, and even a 15,000 CP Tauros, though I generally find my Pokémon Box filled with 100 CP Ekans and Nidoran. The Plus effectively shifted the way I play Pokémon GO from an active engagement to something more akin to AFK farming in MMOs, allowing me to continue to gain experience and items while using only a fraction of the time and thought required when playing Pokémon GO traditionally.

How I prefer to wear the Pokémon Go Plus

I also found that the Plus also allows me to play in settings where I would not normally be able to. The Plus comes with a clip and a bracelet, each on a separate back, so you have to use a screwdriver to switch them out. While I opt for the bracelet back, I rarely wear it as a bracelet, since the fact that it lights up and vibrates can easily draw attention, and reaching across to tap it further highlights its existence. Instead, I tend to keep it in my palm, with the strap around the back of my hand. This allows me to keep it mostly concealed while walking, carrying on a conversation, or watching a movie. I can comfortably press the button with my middle finger, allowing me to harvest Pokémon without broadcasting the fact that I’m playing beyond the occasional notification tone from my phone, or someone perhaps suspecting I’m going to try and prank them with a very poorly disguised hand buzzer.
The Pokémon GO Plus is pretty simple, and does not provide you with any ways to interact with nor any notifications regarding gyms. While it does inform you if you are in range of a Pokémon you have not previously caught by flashing yellow instead of green, there is no other way of determining the value of nearby ‘green’ Pokémon. So long as the light is green, there is no way of knowing if you’re hurling a regular Poké Balls at a Snorlax, or just your average Zubat; no way of knowing if it’s 10 CP fodder, or an 18,000 CP gem. Because you will tend have the app open less, you’ll be checking your Nearby feature less frequently, which could result in missing a rare Pokémon spawning close by.

The Pokémon GO Plus is a convenience feature with a strong risk vs reward factor. While many of its features could be implemented into the game itself, this add-on device is currently the only way, short of purchasing an Apple Watch, to unlock a number of features and ways to streamline your Pokémon GO experience. The convenience and conserved battery power (due to being able to play while your phone is locked) are offset against a low catch rate, and the entire experience is hampered by a less than stable bluetooth connection. Priced at $34.99, but usually out of stock, each trainer will have to decide if the Plus will benefit their playstyle, or if they should just keep on throwing those curveballs.

Best known online as damphyr, Kay Purcell is a purple haired popular culture expert and San Diego Comic-Con panelist who spent fifteen years as as a Senior Community Manager and Brand Writer for DeviantArt. An avid shiny Pokemon hunter, she has a habit of nerding out over video games, cats, VR, and geek culture.
Related Articles: Pokemon Go Plus
Share
Tweet
Share
Submit