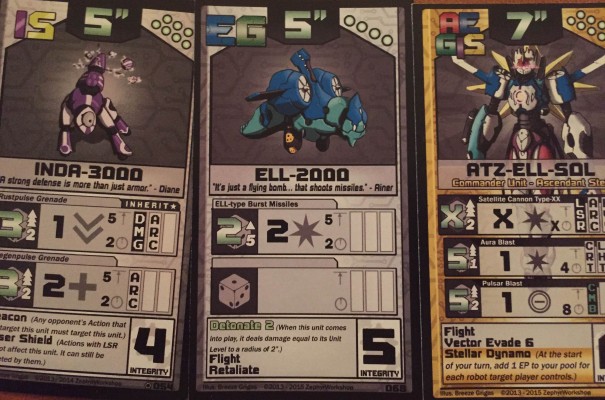 Growing up, I loved Voltron. Voltron was this giant Voltron that would be formed when the world needed it the most, when five pilots of mecha would work in unison and combine their robots together. Since I first got into board games, I have been looking for a Voltron-themed game. A.E.G.I.S.: Combining Robot Strategy Game, which will launch soon on Kickstarter, might be that game. A.E.G.I.S. is a tabletop skirmish game that uses tokens to represent different robots. One team of robots will fight another team, and through the course of the game these robots will combine to form bigger and stronger robots.

Players will form a team of five robots, recruiting from five different classes of robots. A-Class robots are aggressive melee units, tending to be very swift and durable. E-Class robots counter these melee units, as they focus on powerful ranged attacks and versatile movements to shift the tides of the battle. G-Class robots are simply very durable, often acting as shield or battering rams. I-Class robots try to control enemy units by stunning or moving them. Finally, S-Class robots are the support units, coupling powerful ranged attacks with healing abilities. When forming a squad, players pick five robots from any number of the classes. Players will have to consider how their five robots play as a team, but they will also have to consider how well these robots may combine. Over the course of the game, two or more robots from different classes can combine together to form a powerful robots that shares characteristics from each of the represented robots. For example, an AG unit is hard to take out, with strong melee attacks and high damage capacity; while an IS unit stays in the back, debuffing enemies and buffing allies.

During a player’s turn, every remaining robot will produce a certain amount of energy, which will be pooled together. A player’s turn will end once all their robots have acted or after all their energy is spent. Each robot can first move and then perform an action. In order to move, robots spend one energy for each space moved, up to their maximum movement value.

Robots can perform various actions, including melee attacks, ranged attacks, repairing/healing actions, pushes, pulls, permanent increases or decreases to a robot’s energy output, or various temporary stat buffs or debuffs. All of those actions are resolved using a similar mechanic. First, the player calculates the range of the action: some actions will affect one target within range, others affect all targets within that range (including friendly robots), while others affect one target within range and then spread to neighboring targets. Then the active player rolls the indicated number of dice, with the action stating what constitutes a success. Finally, the action powers and inherent abilities will say how effective the attack, repair, push, etc, is.

Instead of performing an action with a robot, a robot can combine with a neighboring unit. In order to combine two or more robots, the owner pays energy equal to the total energy output of the robots that are being combined. These robots are instantly replaced with the combined robot.

At first I was disappointed that Voltron (well, in this case an AEGIS robot) will not created during every game. However, I then realized that the joy of this game comes from deciding when to combine which robots. Sometimes a player really wants to combine robots, but it would be more prudent to control more territory by having more smaller units on the board. At other times, players really need to use the abilities on the combined robots’ cards, despite the fact that they will have considerably less actions to perform that turn. I love that this game forces players to make those tough decisions. You won’t get to create AEGIS (Voltron) in every game, but creating any combined robot efficiently will feel like a great achievement.

There is a good diversity of robots in this game. Robots are distinguished by a range of different abilities. While other skirmish games can get bogged down in the minutiae of the rules, AEGIS maintains a very streamlined play. The base rules are very simple. While there are several abilities on the robots, the abilities are all very easy to understand, and they resolve it a similar fashion. The index of abilities is very clear and logically laid out, which is important in this genre of games. Finally, the games are fast.

Beep, boop, I may have just laid these out randomly.

However, despite this seeming simplicity, I believe there is a lot of game in AEGIS. Between the diversity of robots, the strategic decisions in forming your team of robots, and the tactical decisions of how to position, activate, and combine those robots, this game has a lot to offer.

A.E.G.I.S. is a surprisingly streamlined skirmish-style game that successfully captures the feeling of old fighting mechas cartoons, such as Voltron.