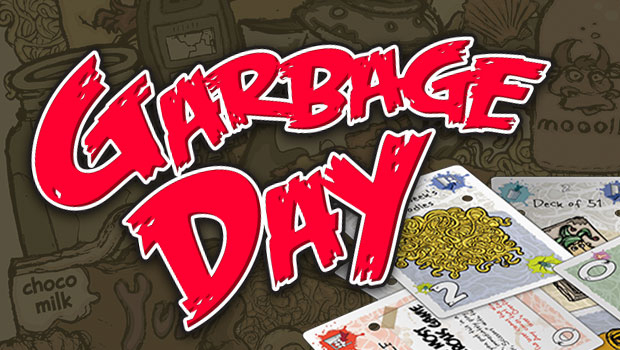 An almost universal childhood experience is the struggle of parents trying to get their children to clean their rooms. Whether this happens when you are five or twenty-five, at some point you are going to have to break down your defense against order and do something about the pile of old food and broken toys. You are going to have to submit to the prevailing culture of cleanliness and throw out your collection of worn out gym shoes and old newspapers. Today is Garbage Day.

Garbage Day is an upcoming game by Mayday Games currently on Kickstarter. In this game, players are trying to place their unwanted refuse into the communal garbage can without making it overflow. If they cause an overflow, they will be called out and forced to haul the rest of the garbage. Over the course of the game as the garbage can becomes brimming with trash, players will have to get more and more crafty to avoid making a mess.

The basics of Garbage Day revolve around the giant stack of garbage cards that players will be drawing on their turn. Cards will be placed either in a player’s room, in an opponent’s room or directly into the central garbage can. Cards that are played into rooms only delay the inevitable. Whenever a player’s room reaches a certain limit, that player is must throw out all of their collected cards.

When a card is thrown out, it is placed on top of the garbage can, which also serves as Garbage Day’s storage container. This placement is where the dexterity aspect of the game comes into play. Cards must be placed such that two holes that are punched in them show the table beneath (as in not fully overlapping already placed cards). If a player knocks over some cards on the garbage can, those cards are added to a player’s overflow pile. If a player overflows the can with enough cards, they are fingered as a sloppy roommate and removed from the game. Last player to stay in the game is declared the winner.

It should be noted that this is a review of a pre-production copy of Garbage Day. So the components might change once the game has been produced. That being said, this pre-production copy has some great quality cards and what I imagine is close to, if not the actual, garbage can that will be used in the production version. The punched cards start out feeling kind of like a gimmick, but quickly become one of the strengths of the game. All in all, I was impressed with the presentation of the game.

Overall the rules are very easy to master and simple to teach. The game supports two to five players well, experiencing only a few hiccups with effect cards than need higher player counts to work. Games should not take any longer than thirty minutes and are very accessible for all interested players.

I particularly enjoyed the small choice of putting cards in your own room, only to trigger your clean up before things get out of hand. This makes for an interesting push your luck element as you hope your opponent stops putting smells and clutter in your room, making it impossible to throw all of the trash out.

While playing, I am constantly waiting for some event to clear off the garbage can. To my knowledge there is no method to do this other than knocking off cards. This means that if you play with even moderately dexterous players the game state turns into a random determination of who triggers the end first. There is supposed to be a threshold of dropped cards that is reached, but with players who know what they are doing that threshold is reached as soon as a card drops because of how precarious the cards are stacked.

If you have a garbage can sized hole in your game shelf, Garbage Day is a solid choice to fill that hole. With interesting choices to be made with where to put trash, and an effective dexterity challenge at its core, backing this game should be a no-brainer for some. Don't go into this game expecting your face to be blown off with raw design potential, but still Garbage Day is an enjoyable dexterity game.

From Trading in the Mediterranean to FPS, I love games. While I grew up in a house without consoles, PC gaming and board gaming were a large part of my formative years, and continue to influence my life. In this golden age of board gaming, I have jumped in headfirst in to anything table top. As a ludilogical student, I love thinking about how games work, their mechanics, their elegance and most importantly, enjoying how fun they are. Favorite Board Game (at the moment): Twilight Struggle Favorite PC Game (base solely on play time): Tie between WoW and DII Fell free to email me: comments, concerns, questions, feedback, rants, and/or suggestions.
Related Articles: Garbage Day, Tabletop
Share
Tweet
Share
Submit