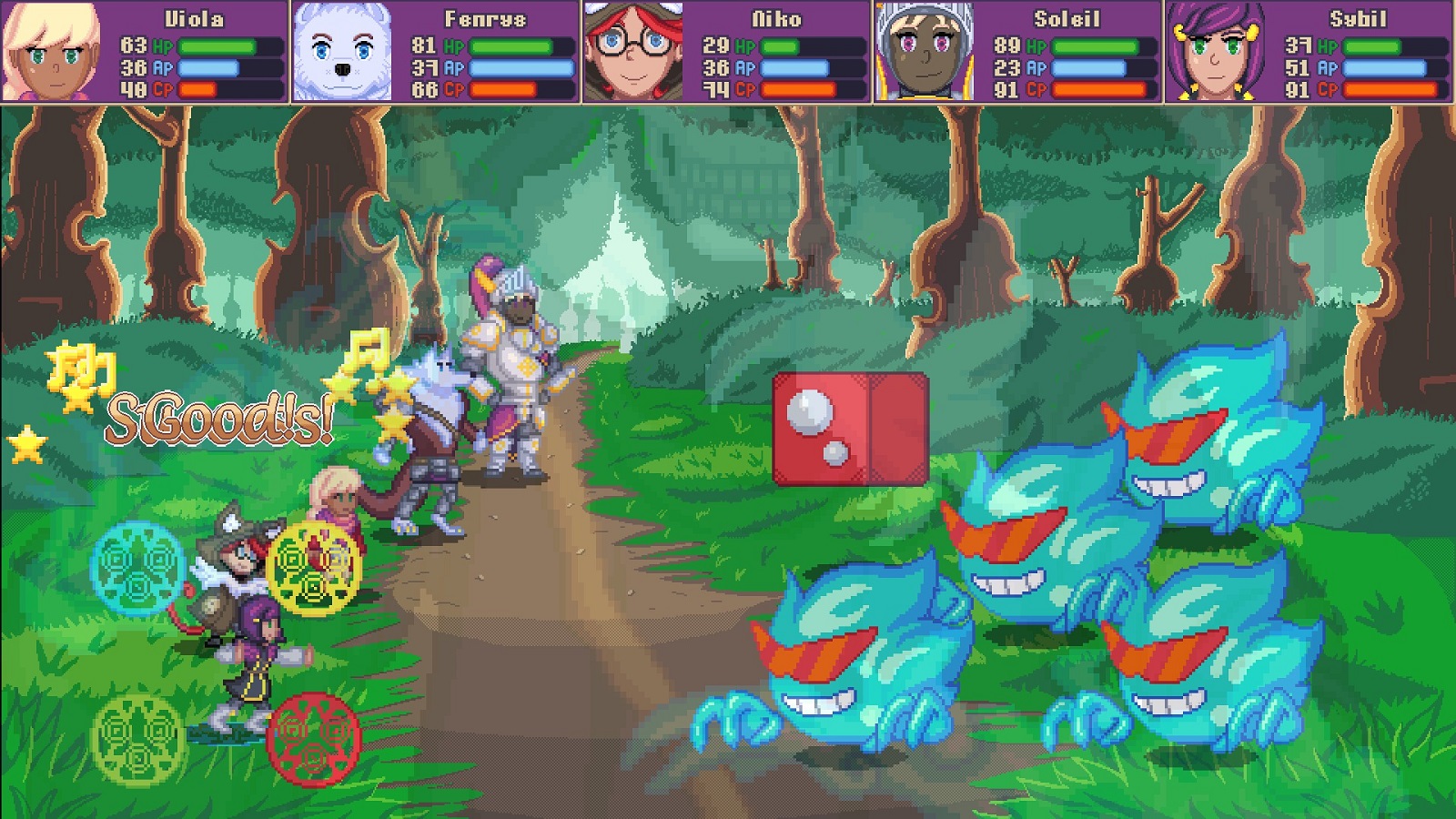 I’m always a sucker for rhythm games, and I’ll take any one for a spin. From Rhythm Fighter to Rhythm Doctor, I always have an open mind to a good rhythm game, which is why I was interested in checking out Viola: The Heroine’s Melody on PC. While it’s not quite the rhythm game as advertised, it’s still a solid RPG with a unique battle system and an endearing cast of characters. 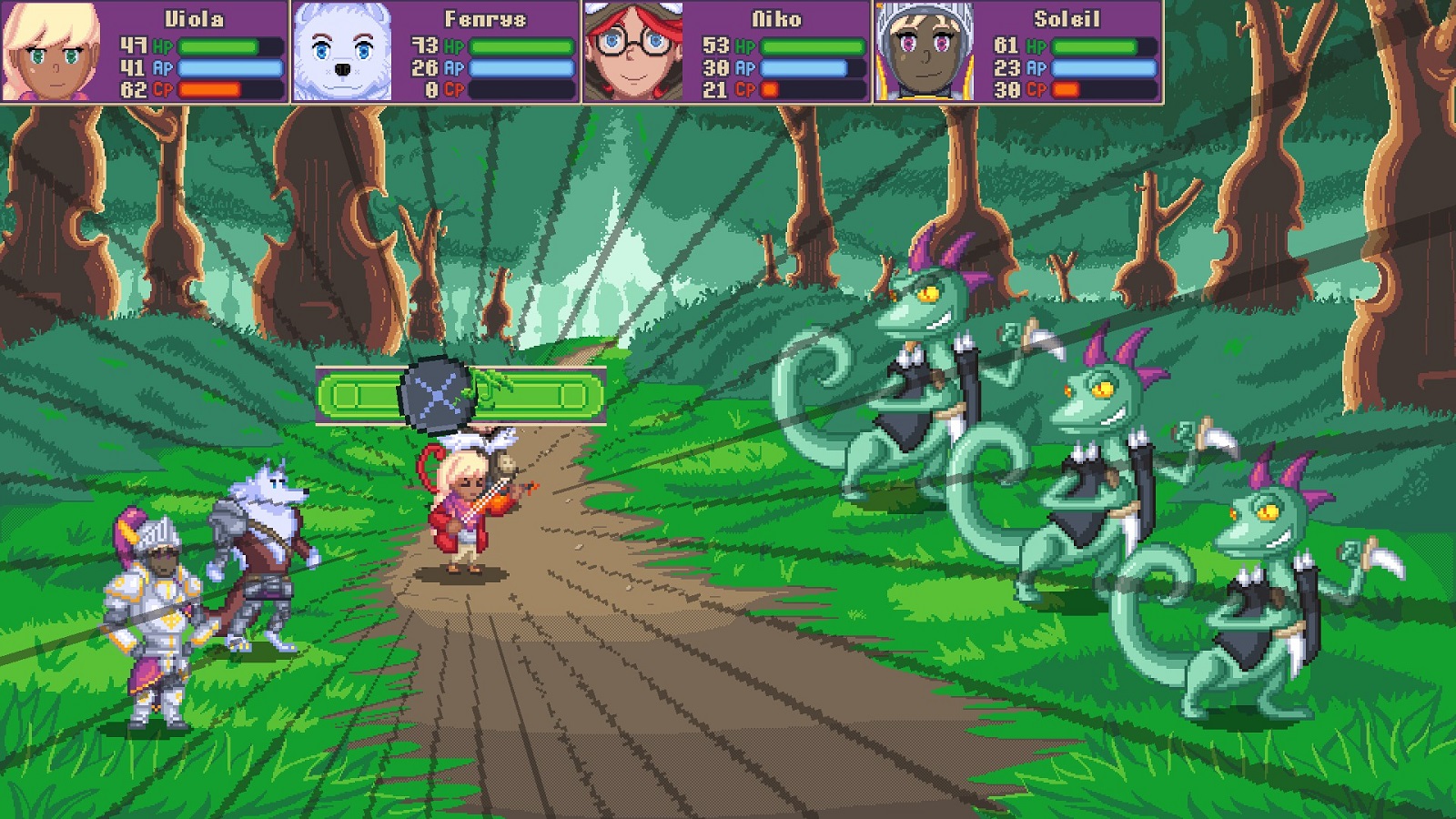 We begin Viola: The Heroine’s Melody with the titular heroine as her self-esteem is in the gutter. It seems that her mother has been gone for a while, and she laments that she can’t play an instrument as well as her. Frustrated with her performance, Viola is suddenly whisked away to another world where she finds out that a mysterious black hole is threatening the land, and she might have been the cause of it. Trying to find a way home, she’s joined by a diverse cast of characters with different abilities (and also the gift of playing different instruments) as players will control the party.

I want to get this out of the way first because Viola: The Heroine’s Melody is strictly not a rhythm game. Well, it is a music-based game since music plays a big role with the cast and the environment, but it feels more like Eternal Sonata in terms of music being an important factor in the game. There are also some areas where you can play a song on your violin to activate different things like opening waterfalls or traveling to the main map ala Ocarina of Time, however. The game is actually a timing and turn-based RPG plus platformer, where characters will take turns attacking enemies in order to earn experience and level up. Each character has different attacks, with two types of special meters: AP, which are replenishable mana points, and CP, which will refill during battle. In order to execute these attacks properly, you’ll have to time the corresponding buttons in time with their overlays. You might have to simply match up a button press, mash a button, or even hold one for a duration of time. Mess up, and you’ll either have lower effectiveness or even fail the move entirely. (If you’ve ever played Sonic Chronicles on the DS, you’ll feel right at home.) 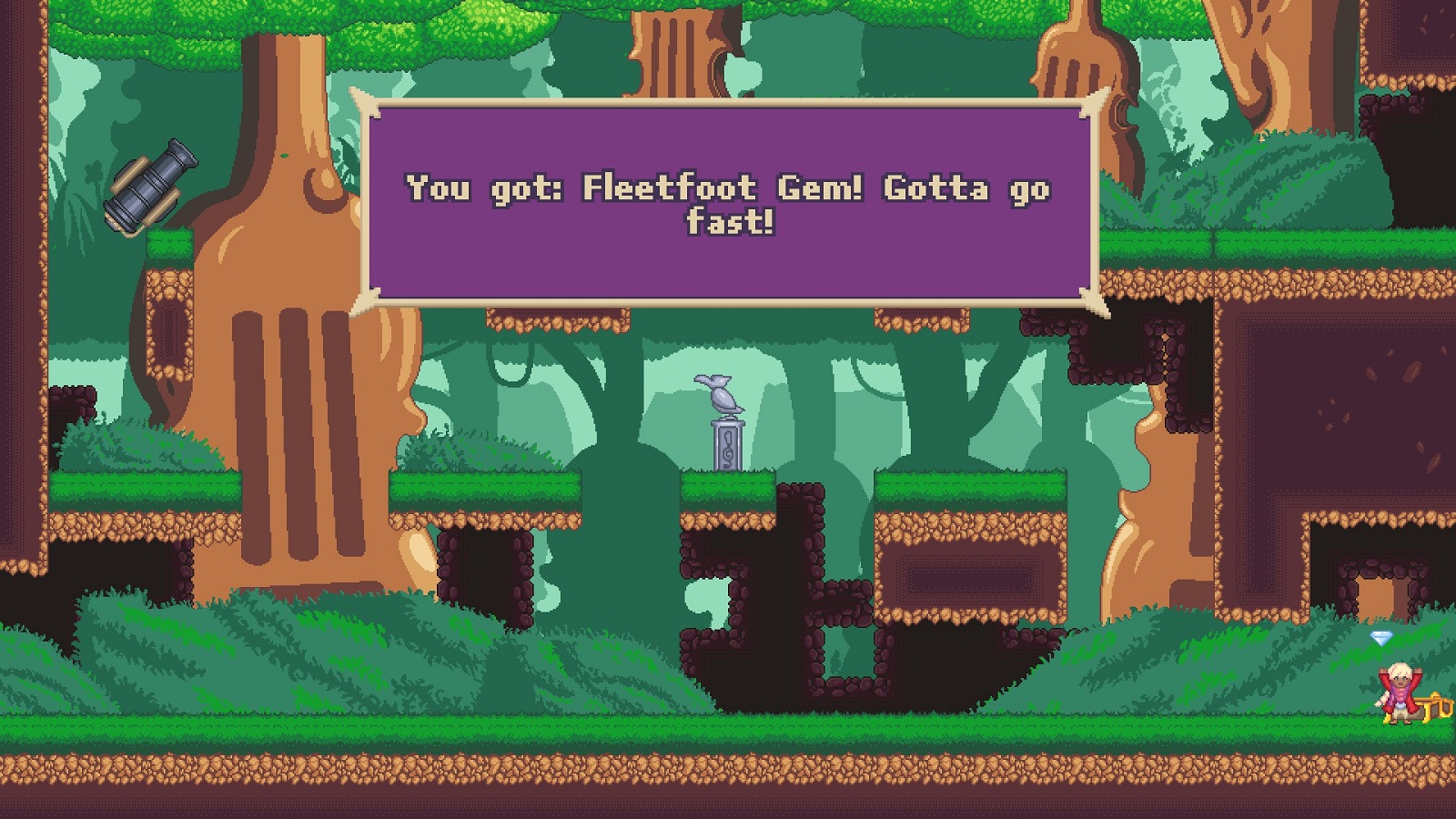 In addition to the basic mechanics, you also have an element system where different attacks have different properties to them. You can dish out more damage if you can figure out which attacks are strong against a certain enemy, though there isn’t much in the way of tutorials to figure this out. A lot of the game is learning what to do as you go, which is a fine approach for a dynamic RPG such as this one, but I would like a more extensive glossary of terms and techniques. That said, the main battle loop is addictively entertaining and challenging, and I was having a blast grinding during the common battles.

Grinding is something you’ll be doing a lot of, since the game’s platforming elements leave a lot to be desired. Viola has a triple-jump that’s momentum-based (think Super Mario 64), which makes it a bit more unreliable than it needs to be. Oftentimes I’d be running from an enemy only for my triple-jump to activate when I didn’t want to, thus initiating me into a battle. I didn’t really mind it, but it did cause some trouble for me when managing resources. Here, recovery and saving aren’t as common as you might think. Recovery is reserved for consumables and when you level up, and you can normally save when you finish a level, but not during one. Once the shop opens up around an hour into the game, you’ll be fine in terms of recovery items, but if you keep getting killed by the enemies, you may want to change the difficulty to “Story” rather than “Normal”. 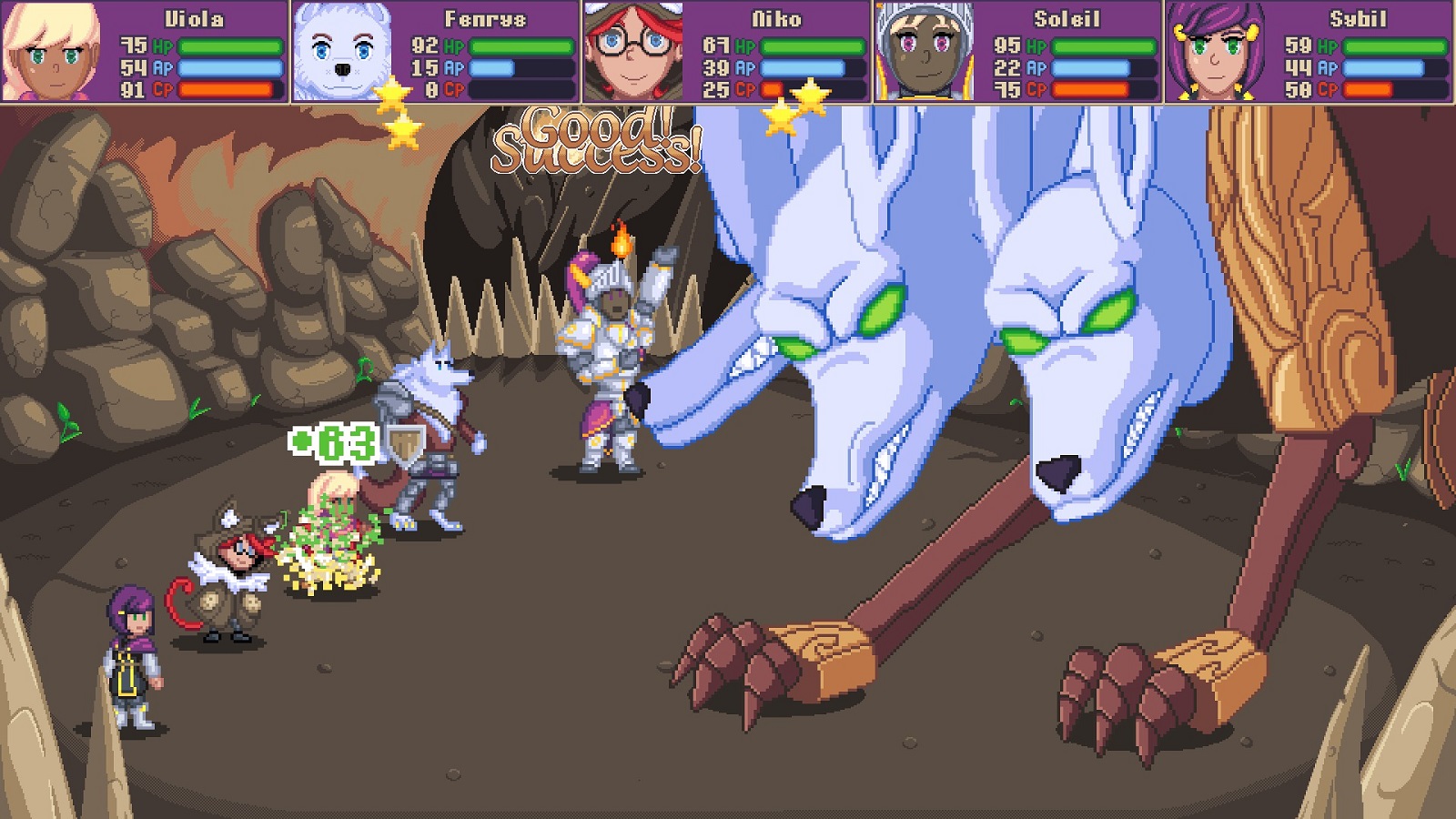 I think this is a fine option to have since the story is engaging. While the main plot of “try to get Viola home” is present, the cast of characters is unique and fleshed out. From the armless magic catboy Niko to definitely-not-Papyrus skeleton Mallow to the loveable bird Momo, there are quite a few characters you can have in your party. Thanks to the elemental system, there are advantages to swapping them in and out during the game, and each of them have abilities that would be helpful during my journey. In addition, there are socialization segments you can partake in when you set up camp at Wishfires where you can talk with party members and increase their relationship rank. This will allow them to acquire new skills and even trigger some event quests. I liked these side stories as they allowed Viola to grow as a protagonist trying to help solve her friends’ issues  rather than be absorbed in her own. 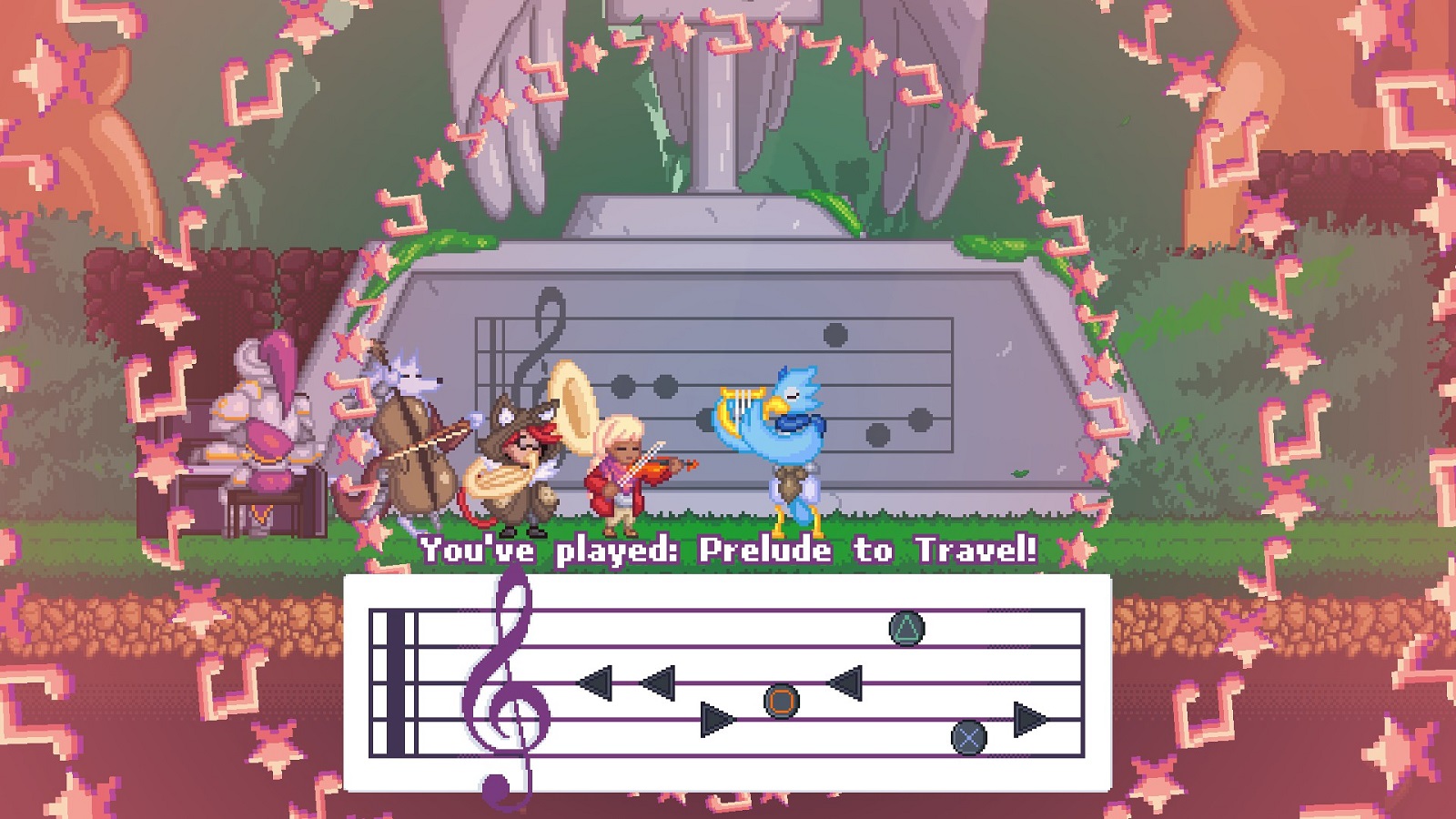 The game recently went out of Early Access, but I still see that the game needs a bit more polish in future updates. There were times when I would nearly softlock in the game (such as in the platforming sections when a spring wouldn’t activate or I would clip outside some boundaries, jumping in vain before finding a way out). Sound effects don’t play when a character or enemy is defeated, which actually caused me to lose a couple party members because there was no audio indicator when someone was knocked out. Some interface elements stay in place during battles if I didn’t have enough AP to cast an attack, though in general the game remains functional. Overall, Viola still needs some polish in presentation, but it still has a great look and art style.

Viola: The Heroine’s Melody might need a bit more time in the cooker, but it’s still an entertaining RPG with fun characters and a great core battle system. If you can overlook its weaker platforming elements and sometimes buggy glitches, you’ll have a good time with the game.

Elisha Deogracias is an aspiring accountant by day, freelance writer by night. Before writing for Gaming Trend, he had a small gig on the now defunct Examiner. When not being a third wheel with his best friends on dates or yearning for some closure on Pushing Daisies, he's busy catching up on shonen manga and wacky rhythm games. Mains R.O.B. in Smash. Still doesn't know if he's a kid or a squid.
Related Articles: Indies, Viola: The Heroine’s Melody
Share
Tweet
Share
Submit