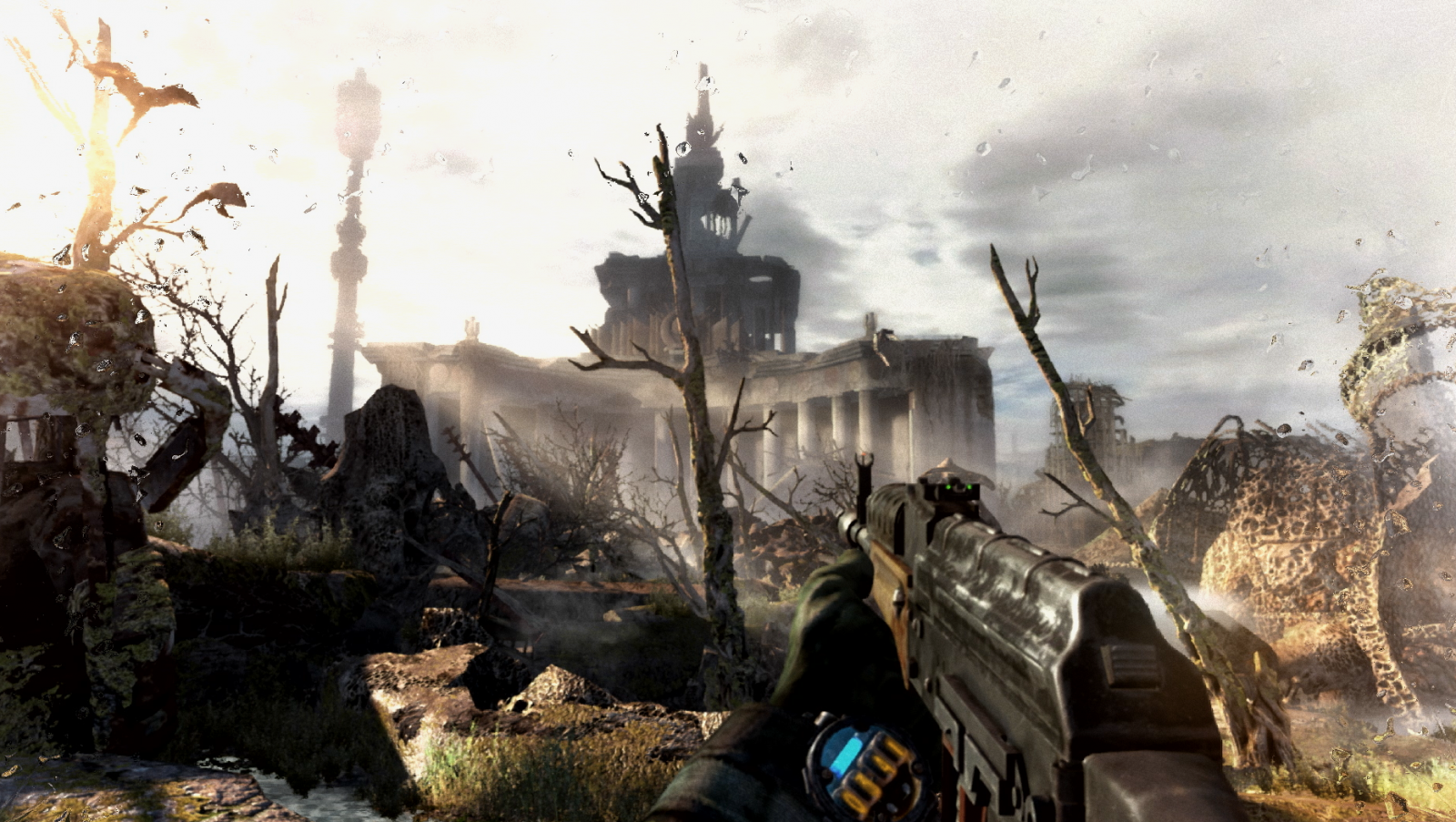 When we think of games being ported to a new console, especially a console of a newer generation, gamers can be reluctant to think it will pay off. As a result, we often see performance issues and a lack of features such as multiplayer support due to poor optimization, while the heavy lifting is usually left to a small development team that is lacking the experience and knowledge of the game’s engine to make the game a successful port. With Metro 2033 and Metro: Last Light Redux, 4A games took it upon themselves to make sure the port to the Nintendo Switch was done right.

When Metro 2033 Redux and Metro: Last Light Redux were released during the previous generation, they pushed the graphical capabilities of game consoles and even PC hardware. I remember vividly the first time I booted up Metro 2033 Redux on PC, thinking that my tank of a rig was more than capable of running it on the highest settings, and finding that was I wrong. Now, with both games relaunching on the Switch, it’s easy to be a skeptic. Rest assured, 4A games has done a remarkable job with bringing this triple-A franchise to the Switch. 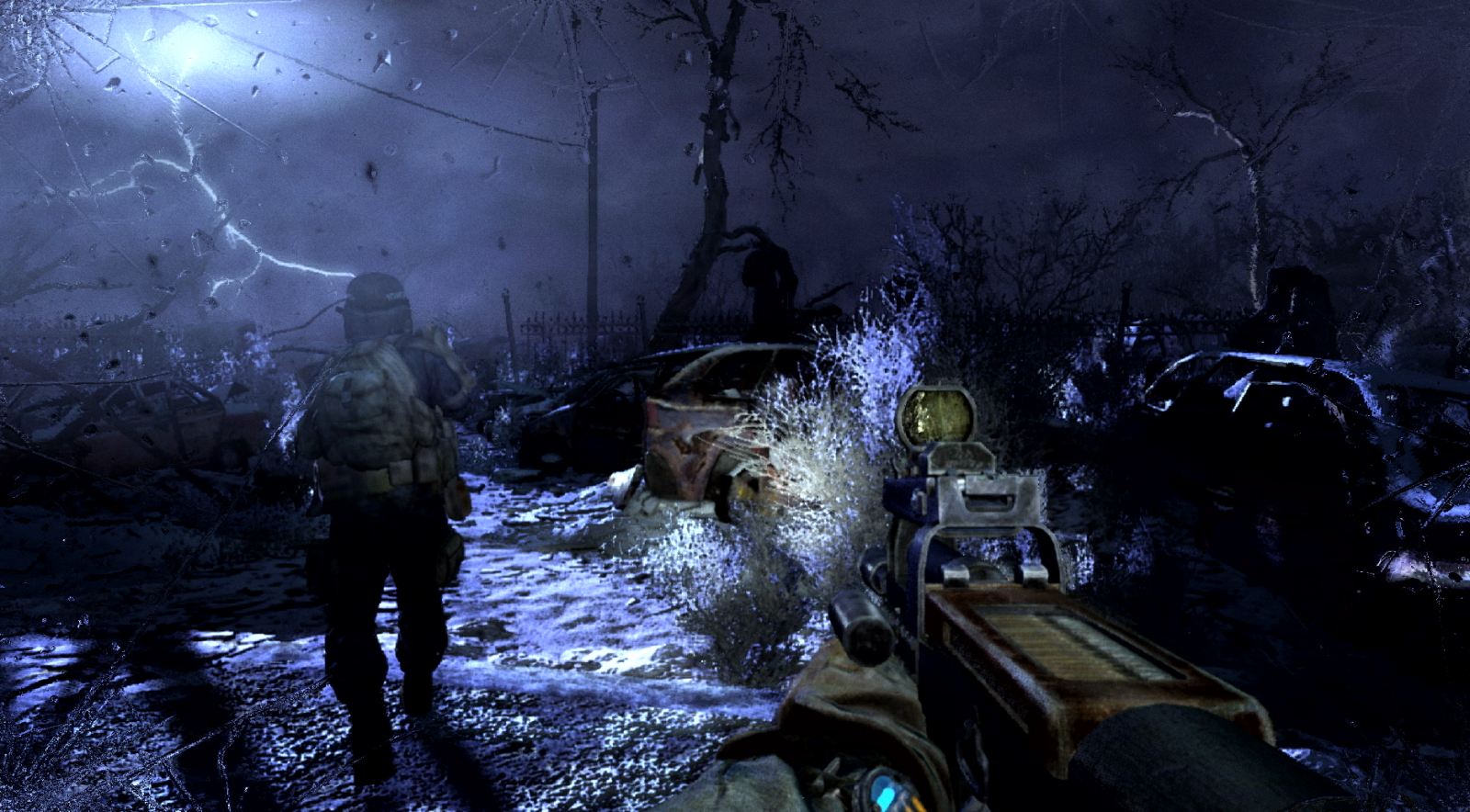 For those who are playing the series for the first time, allow me to give you a quick refresher. The Metro series is a first-person shooter, survival-horror game that takes place in the rugged underground subway system of Moscow. In Metro 2033 Redux, nuclear war has left the surface of the world, specifically Moscow, an uninhabitable wasteland where radiation and the Dark Ones that remain. Humanity has been forced to live in the bowels of Moscow to survive. You play as Artyom, a soldier who was born a day before the great war took place. It will soon be his job to find out what threat now walks the surface and scours the tunnels, looking for the last remnants of civilization. Moving throughout the collapsed veins of the city to outlast whatever else that lurks in the world, Artyom and his comrades will face off against a threat greater than the nuclear bombs that fell from the sky. Metro: Last Light Redux takes place a year later, where you continue as Artyom, but finally knowing your purpose, you look to end the fight between the Dark Ones and rival human factions – but things aren’t always as they appear.

Because the Switch is a hybrid system, offering the pleasures of a traditional home console and the mobility of a handheld, I’m going to share with you my experiences with the Metro series in both modes. To start, the game does take advantage of the Switch’s motion controls, so aiming and looking around the environment is as easy as a flick of the wrist. I did find playing with the Pro controller or the Joy Con controller grip the best way to play, as it is a first-person shooter. Not that playing it in handheld mode is bad, but it’s difficult to pull off precise headshots on targets that move like a bat out of hell. If you do play in handheld mode, definitely turn on motion control aiming, it will save your life. 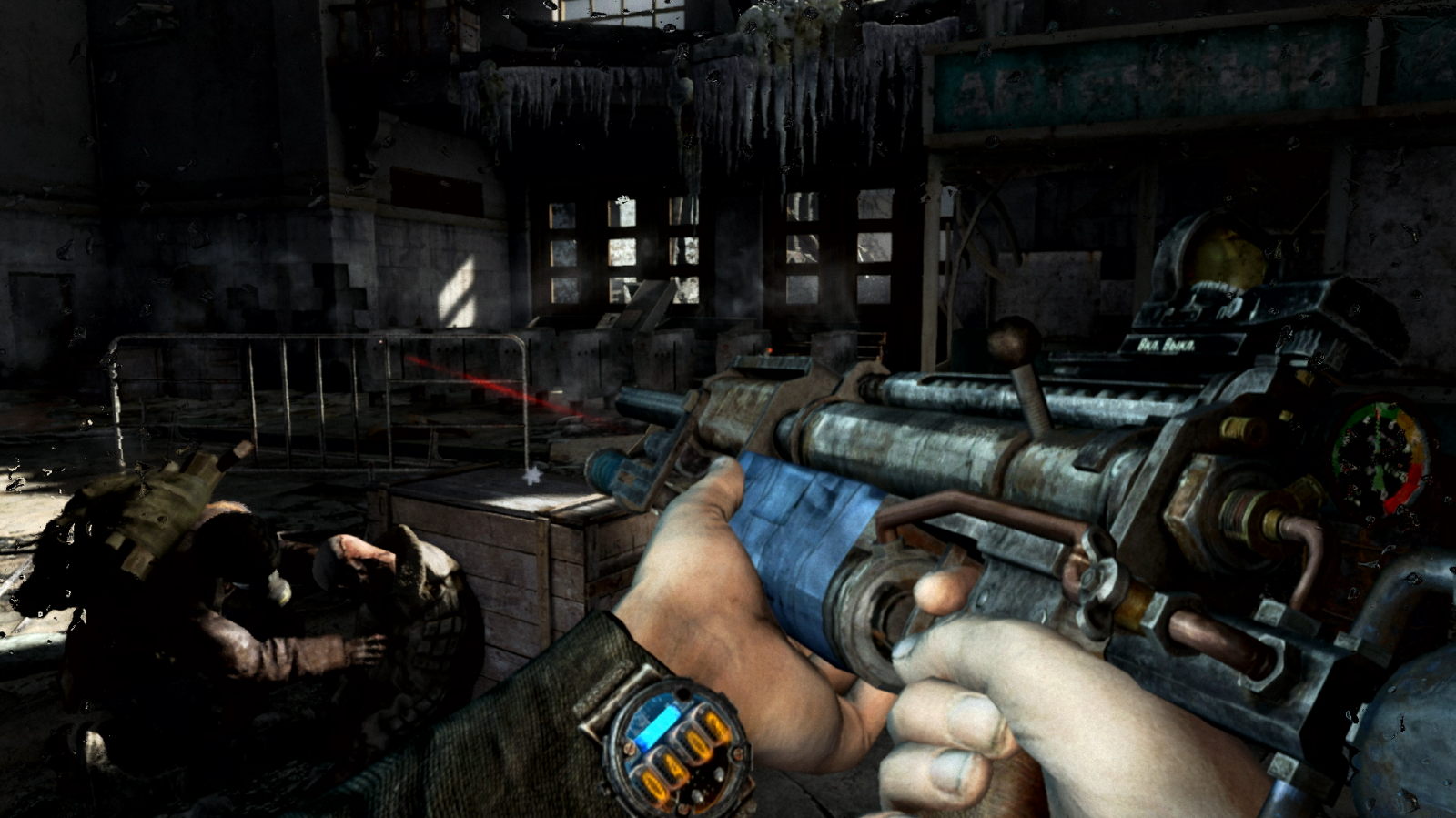 Aim for the head

I started in docked mode, playing on my 4K, 85in QLED TV. No, the game doesn’t support 4K, but I was looking to see how the system handled the black levels and color gamut, especially in the subway systems where it’s dark, and in some sections, you can experience a wide array of colors. I did swap between handheld mode and docked mode to get a good comparison of each level in each mode, because a large part of the gameplay takes place in the dark and dimly lit areas, it’s important to see how the Switch’s hardware could cope with the changing lighting environments and gameplay scenarios.

While in docked mode, the game looked great. As Artyom jumps out of bed, the light from the oil lamp illuminates the room nicely, even shadows were displayed correctly as I stepped in front of the light source. The lighting in dimly lit areas was pretty good as well for seeing hidden items to collect. The shadows, though not as sharp as they are on the PS4 and Xbox One, never took away from the supernatural tone and mood of the game. I could tell that some of the lighting and shadow settings have been turned down on the Switch as to keep a smooth 30 fps. The game does an amazing job with keeping a steady framerate while not lowering the sharpness or diminishing the resolution. But it is apparent when looking closely at objects, texture quality has also been turned down a bit to keep gameplay smooth. 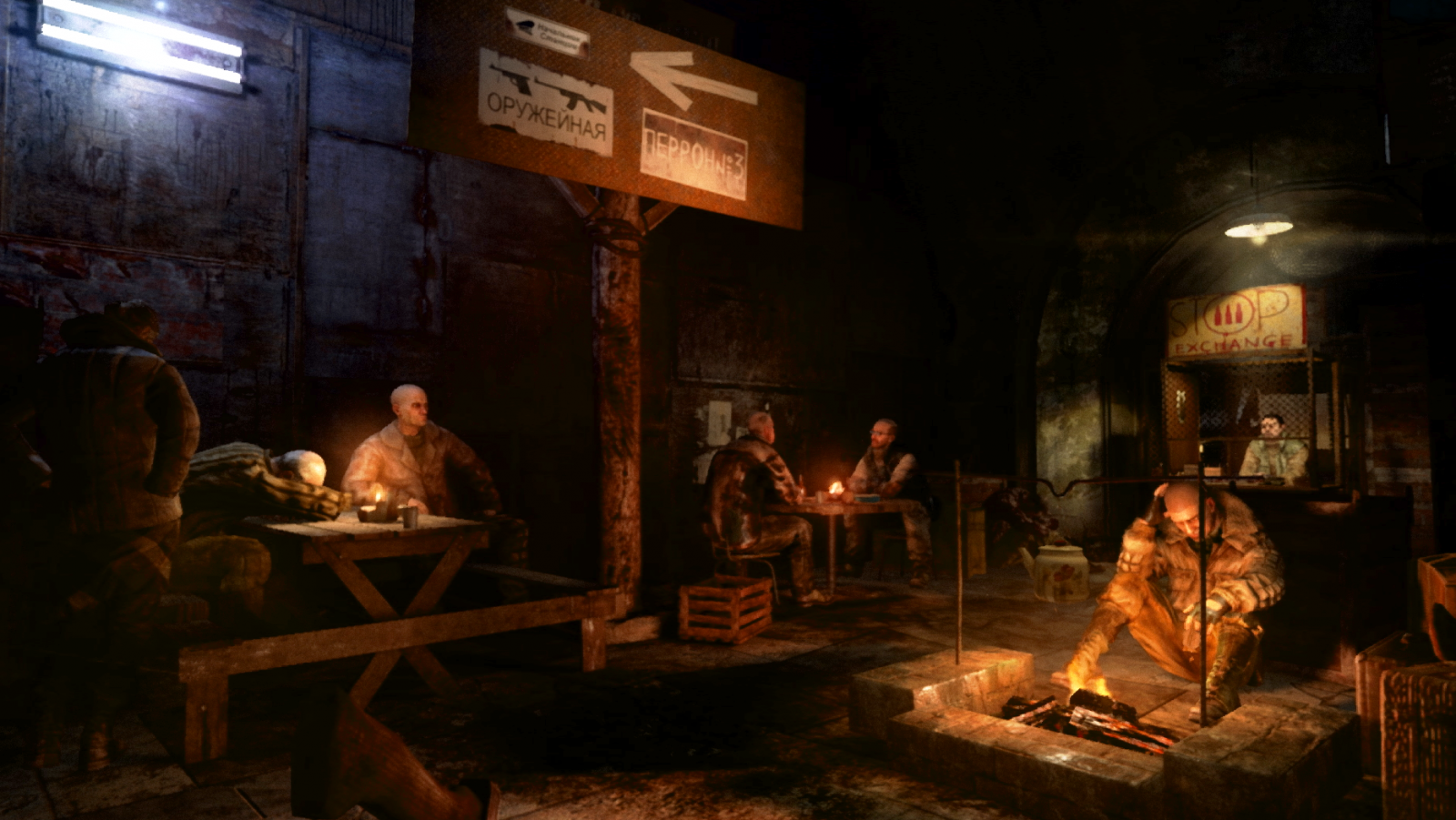 Only the strong survive

In handheld mode, things were good, but a mixed bag overall. I did experience a lot of ghosting on objects, especially when moving quickly throughout the world or when characters were close to the camera and moving. This is due to the quality of the LCD display on the Switch, as I didn’t have this much of a problem on my TV. When moving the camera quickly when in a fire fight or talking to an NPC, the images would leave a trail of itself, also diminishing the image quality. Playing this is a well-lit room or outside will definitely be a problem because the backlighting of the LCD doesn’t allow for black areas to be extremely black and whites to be brilliant. Locating ammo and hidden items in handheld mode was an extreme challenge. So much so that I would blindly scour about in areas until the indication on my HUD told me there was something there. Performance of the game is extremely stable. Locked at 30 FPS, the game runs buttery smooth, even during moments of intense firefight and NPC’s in the scene.

Once on the surface, the draw distances were good enough that it never took away from the experience. The occasional pop in of objects in the distance would happen from time to time, but I noticed it because I was specifically looking for it. When running and gunning, looking for a safe place to take shelter from incoming fire or mutants, the game never felt as it struggled to keep up. Especially in Metro: Last Light, when trying to fight off mutants that come at you in waves, the inputs were flawless as every button press felt immediate. 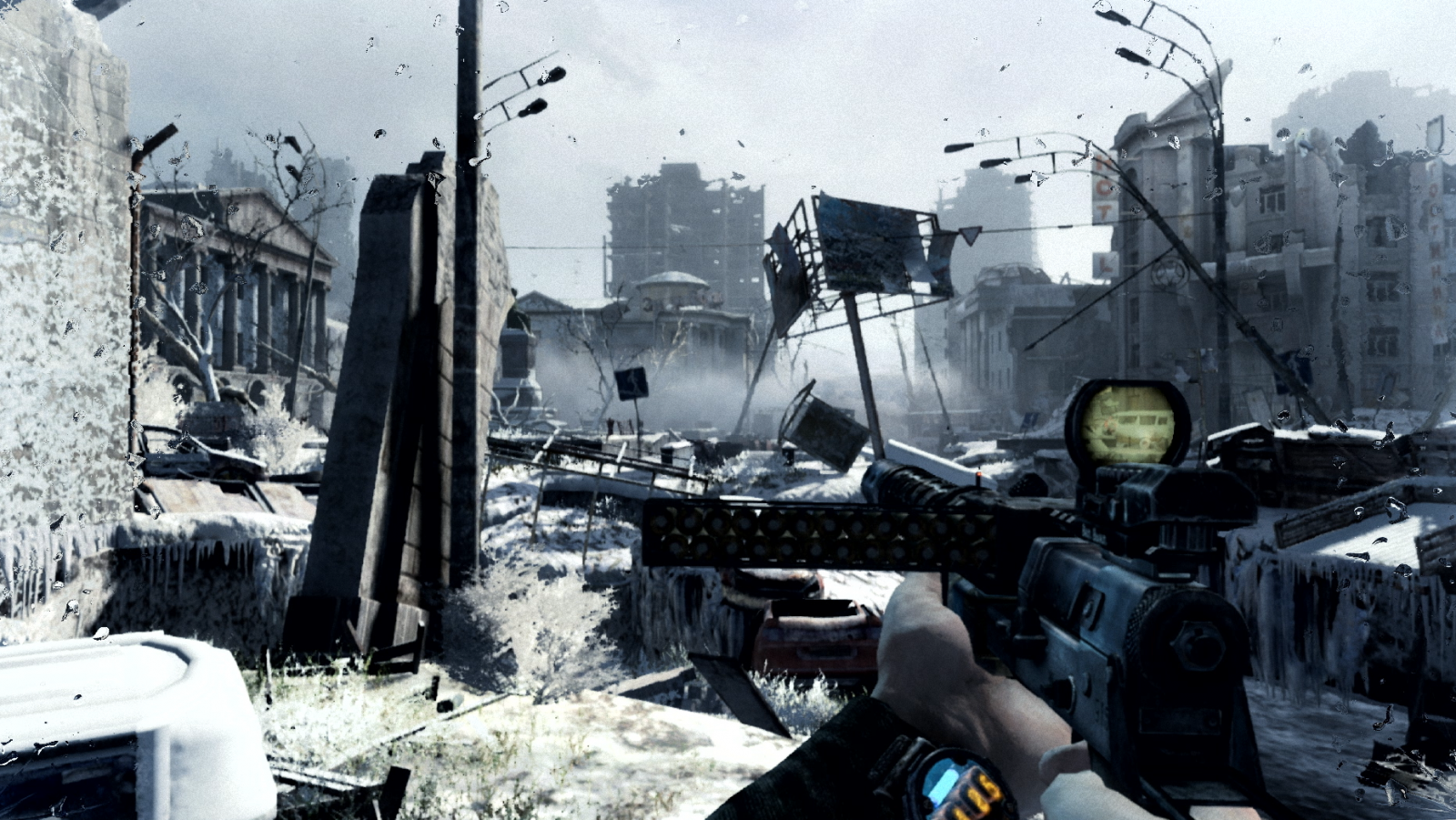 What did blow me away was the audio in docked and handheld mode, whether it was playing 2033 Redux or Last Light Redux. In docked mode, the game took full advantage of my surround sound system in my game room. Every creepy and sinister sound was audible without distortion or feeling as if it were lacking substance. Bass felt heavy with a trembling force, and the blend of high treble to low audible chatter was spot on. As I made it through the prologue of the game and into the depths of the subway station where I found myself chasing shadows, shooting mutants, and having the game mess with my psyche, the audio was crisp and added to the world that was already scary enough to play with the lights on.

2033 Redux, being the first entry of the series does play mind games more that Last Light, so hearing the whispers of missing children in the tunnels and howls of mutants on my heels set the mood nicely. In handheld mode, the speakers are utilized nicely with what sounds like spatial stereo sound. When walking around in the small areas where humanity has hunkered down, I could clearly make out conversations from NPC’s behind cracked doors, motivational speeches given to soldiers down the hall, and even the cheerful innocence of children playing. Moving the camera around causes audio closest to you to be louder and clearer, as the background chatter becomes less apparent. It’s these little things that make the experience playing on the Switch top notch. 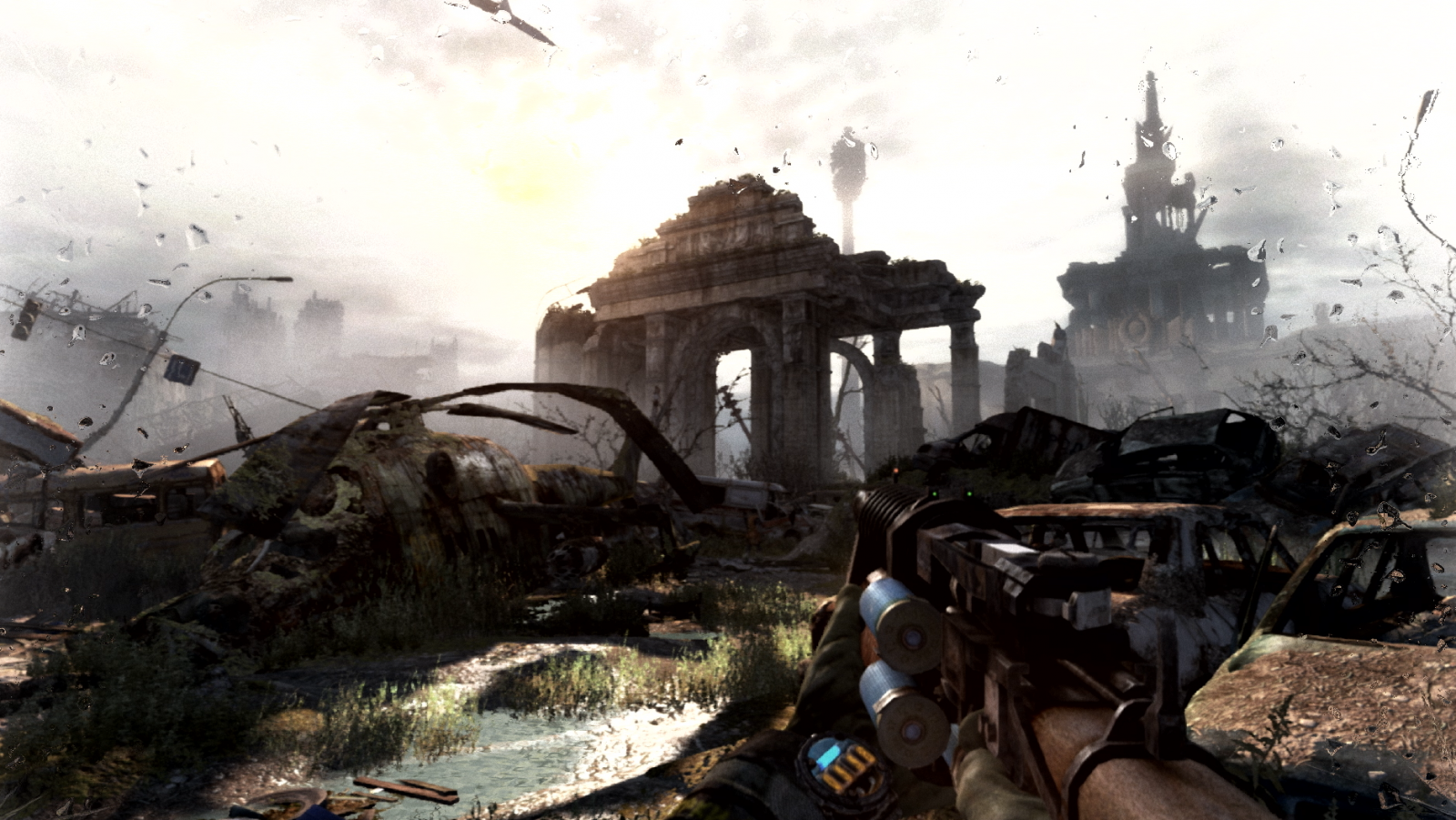 Like all games, there are a few minor blights that showed while playing. While playing the digital download version, I did notice that load times can be long, depending on the level loading. Most of the time, the game loads within twenty seconds. The worst case I’ve come across was where it took almost two-minutes. This happened once or twice, but it’s nothing to worry about. I purposely tested this by dying in areas where there was a lot going on, and to my surprise, I was back in the trenches within seconds. I do recommend using the motion controls when aiming, there are moments when the game doesn’t re-center the camera, and you’ll find that you must use the right thumbstick to do so. It is something that can be fixed possibly in an update. All in all, Metro 2033 Redux and Metro: Last Light is a welcomed triple-A experience that the Switch needed. It’s good to see that this hybrid console continues to flex its muscle.

The first-person survival horror aspect of the game doesn’t suffer at all on the Switch. From the visuals, audio, and inputs, everything feels and plays as if the series was made for the console. In fact, it’s a testament that the Switch is more than the sum of its parts. Though there is a loss of some visual fidelity, and some sacrifice made while playing in handheld mode that comes in the form of battery life, Metro 2033 Redux and Metro: Last Light feel at home on this hybrid console.

T.K. is a narrative designer and creative visionary. As a game writer, he spends much of his time designing and developing worlds, developing deep characters, and writing strong narratives to evoke emotions from the player. If you can't catch him writing, you can catch him on 2's.
Related Articles: Industry, Metro 2033: Redux, Metro: Last Light Redux
Share
Tweet
Share
Submit