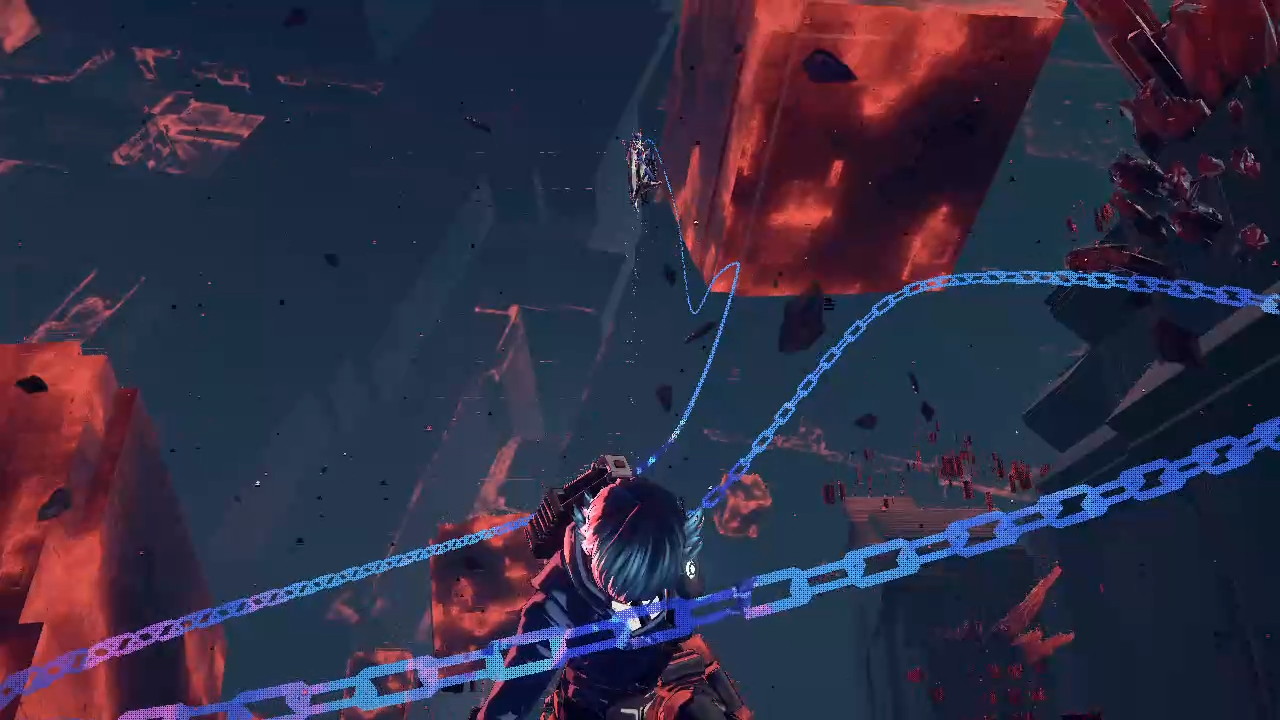 You know that scary dog trope that shows up in a lot of old cartoons? The one that if it got off the leash would definitely attack you? Astral Chain takes that concept to the extreme, but this time you’re the one holding the leash.

Developed by Platinum Games, of Bayonetta and Nier Automata fame, Astral Chain is a Character Action game. Like all genres its definition is nebulous, but basically it’s a game that has a focus on combat, and creating stylish combos while dodging enemy attacks. Platinum specializes in this genre, and Astral Chain takes bits and pieces of some of their recent hits, mashes them all together with a dash of something new. In Astral Chain, you play as a new recruit of the police’s Neuron task force, essentially supernatural detectives who investigate dimensional disturbances on humanity’s last refuge: The Ark. Normally, people can’t see the monsters from the Astral dimension, called Chimeras, but having a trained Chimera, or Legion, by your side allows one to both see and fight back against this threat to humankind. But when you fight fire with fire, you should be careful not to burn yourself, so you have to control your legion with the titular astral chain. It’s a lot of proper nouns and fictional science to explain, but basically your combat partner wants to kill you, and the only thing stopping it is the collar around its neck. 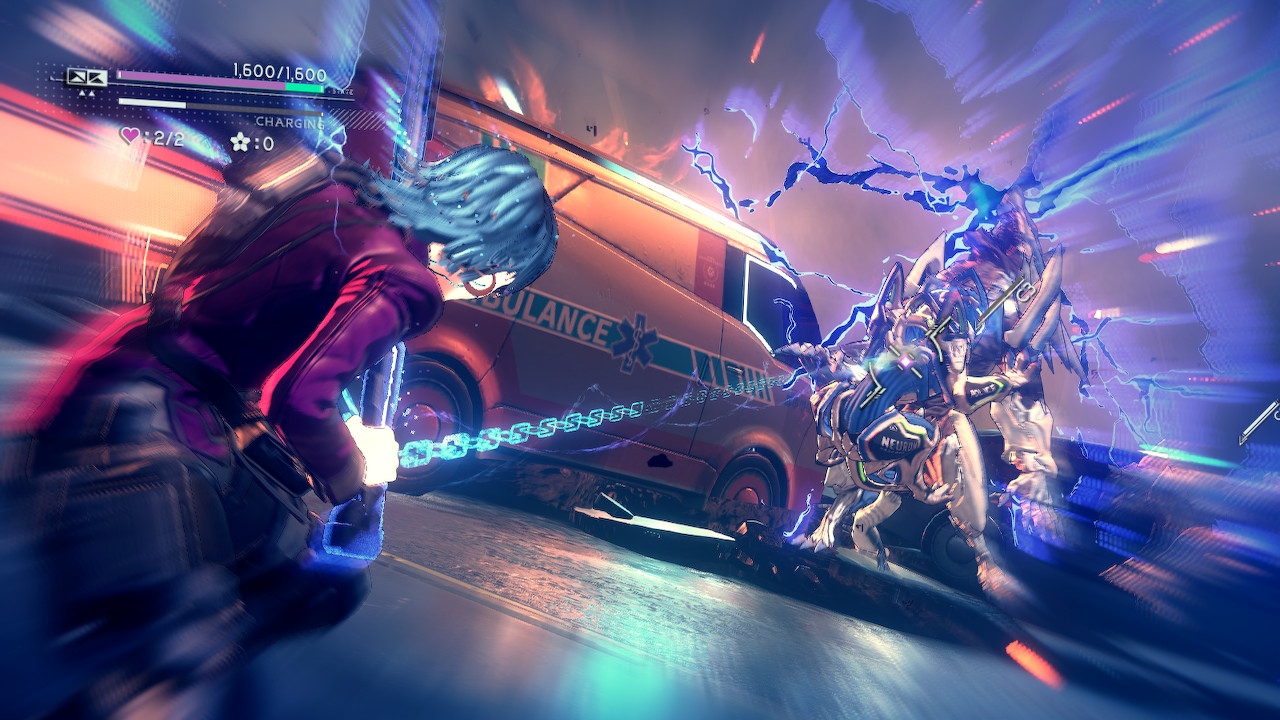 While Astral Chain may not have a moveset as expansive as Bayonetta, you only have one attack button, it may be Platinum’s deepest and most expressive combat system yet. You control your character and their Legion simultaneously; one button is your attack, while another issues commands to your legion. The player has three weapon configurations they can swap between at any time: a baton, a pistol, and a sword. Each has a standard combo, a pause combo, and a charged hit. Your Legions have their own combos and a few special moves. The two of you can’t do a lot on your own, but chained together they can do so much more.

After performing a combo, the player can call upon their legion for a follow up attack, like the vehicle attacks in Transformers Devastation. The Legion can pull the player towards it to quickly traverse the battlefield, cross gaps, or attack enemies. Each Legion has a unique skill that the player can use, such as manually aiming the Bow Legion’s bow, or having the Beast Legion dig up evidence. Using the chain together, you can also tie up enemies or restrain criminals. Frankly, it’s surprising the amount of things you and your legion can do both in and out of combat: after finishing the game, I discovered that using the chain jump when an enemy is standing directly between you and your legion you can actually move the enemy towards your Legion. What the combat system lacks in breadth, it more than makes up for in depth and player expression. 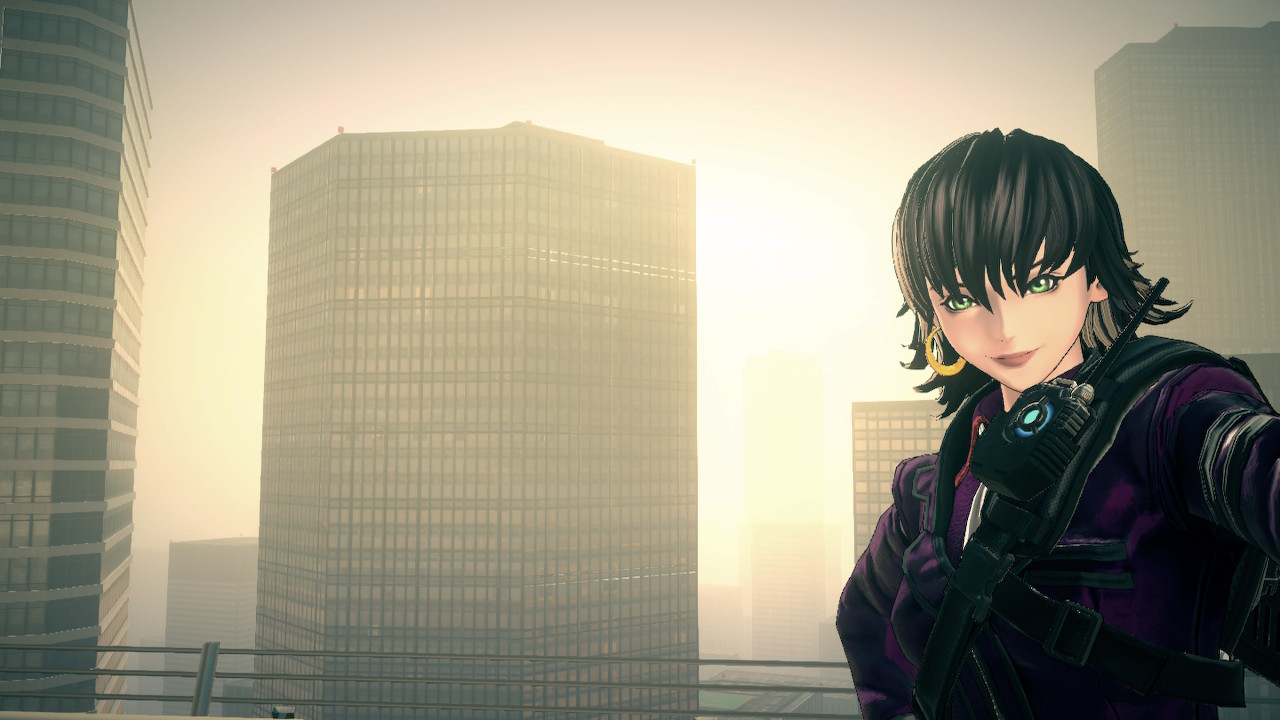 The only thing that really drags it down is the camera. Your hands are often too busy to control it yourself, and it does a poor job of following the action by itself. It tries to keep the player, the Legion, and the enemies you’re both targeting on screen at once, but all it really ends up doing is making the screen a bit of a mess. It doesn’t hinder gameplay too much, but it could have been zoomed out a bit more to avoid getting hit by attacks coming from off screen. The issue can be helped a bit with the camera options, specifically “fixed player position,” but it will still be an occasional problem. You also have the option for a second player to control your legion and the camera, but it’s a shallow experience essentially splitting the controller in half. If there is a sequel (please let there be a sequel) I would love to see a more fleshed out co-op mode.

When I mentioned that Astral Chain has bits of other Platinum games in it, I don’t mean that metaphorically. For example, the followup attacks after a combo or dodge feel like they were lifted straight from Transformers Devastation, the short slow-mo you enter after just barely dodging an attack is essentially Witch Time from Bayonetta, and the finisher you can perform on most enemies that also heals you works the same as in Metal Gear Rising: Revengeance, same for the Blade Legion’s precision cutting mode. If you’ve played a Platinum game before, you’ll find something that you’re at least familiar with here. In my first playthrough, I played on the PT Standard difficulty and, while I did find it a bit too easy at times, it feels like the right difficulty for learning all of the games mechanics. I think it would have been a bit too hard to, say, move your legion around the battlefield for the first time while also attempting to dodge devastating attacks you’ve never seen before. Enemies can hit quite hard, often taking about a third of your health bar in a single hit. You’ve got plenty of items to heal and support you now as well, especially since using items no longer incurs a score penalty. This does make it laughably easy to get an S+ rank on each case, or encounter, skipping cases also doesn’t seem to affect your score too much either. Of the few missions I’ve played on the PT Ultimate difficulty, which is unlocked after finishing a mission on PT Standard, it’s not too much harder either. This means one of two things: I’ve gotten very good at character action games over the years, or Astral Chain is designed mostly for newcomers to the genre. As much as it hurts my ego to say it, I believe it’s the latter. The game starts you off on Casual difficulty and includes an Unchained mode which can automate some parts of combat. It really is the perfect game for people to start with too, it has elements from other games in the genre and has a lot of variation in its gameplay. It’s like the Kirby Superstar of its genre: everyone can find something to like and play another game that emphasises that part of the gameplay. 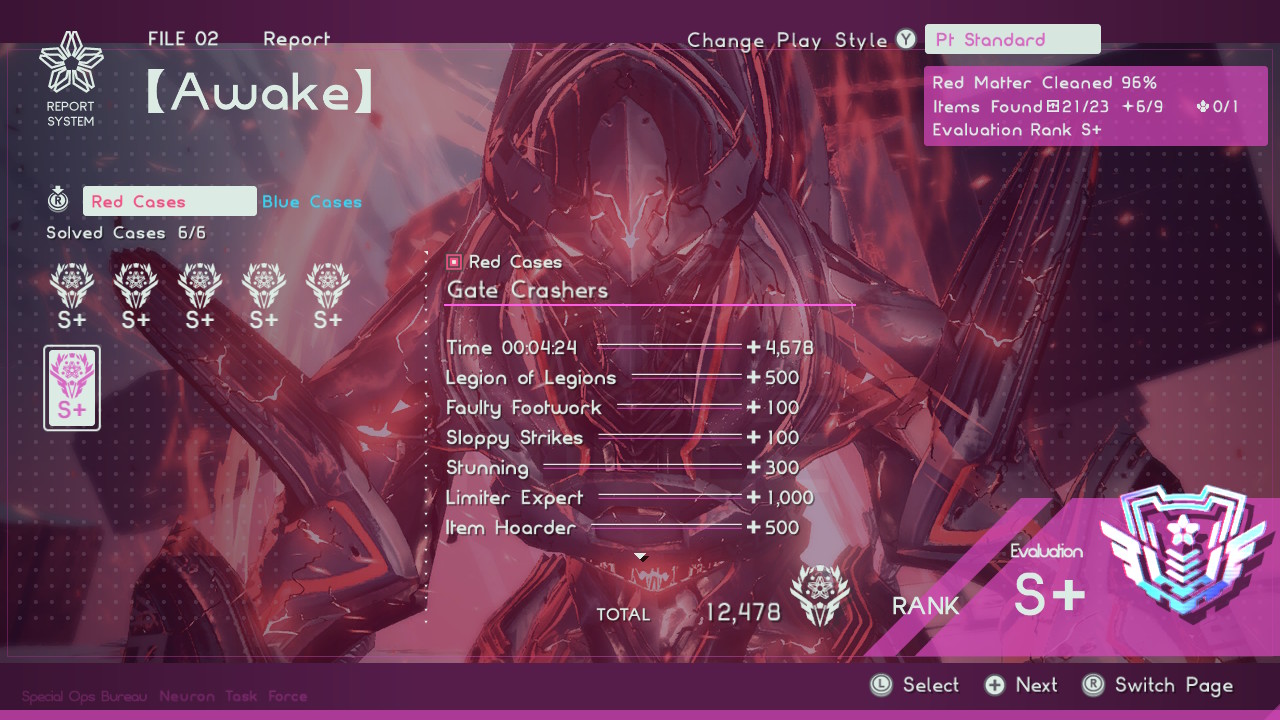 While combat is flashy and fun, the game is an audio and visual treat as well. The Ark has a great sci-fi aesthetic, with neon lights everywhere and holographic crosswalks. The game’s diegetic UI and menus accent this aesthetic perfectly, with clean, flat icons and colors you can customize. Speaking of, there is quite a lot to customize in Astral Chain. You begin the game by choosing which of two twins to play as, either a boy or girl, and changing their appearance to suit you. Later on you can change your outfit as well as unlock more clothes and color pallets for your equipment, Legions, and UI. I didn’t know how much I wanted this amount of customization in a Platinum game, but now I don’t want to go without it. However, it is a bit disappointing that you can hardly customize your twin, especially since they accompany you for a majority of the game. The only things that really change about them are their gender and skin color: if you play as a female, Akira will be male and vice versa, and their skin color will match yours. It’s disappointing, but not too big of a deal considering the wealth of customization the game already offers you. The soundtrack contains several jams as well; the police station theme is a bop and a half. Each track can dynamically change depending on where you are, what you’re doing, and whether or not you’re in combat. Sound effects are punchy and satisfying too, everything about Astral Chain just exudes style.

The plot, while occasionally predictable, is especially good for a character action game. As a Neuron officer, you’ll be investigating various extradimensional cases. This means finding evidence, putting the facts together, then chasing after the baddies. These sections are one of my favorite parts of Astral Chain. The game trusts the player to thoroughly explore crime scenes, use their Legion creatively to find clues, and piece it all together with your partner in crime. Going in, I expected there to be only a few of these sections and for them to be fairly short to get to the combat quickly, but you can easily spend a half hour of each level just exploring the city and helping out citizens. I found these to be just as fun as the combat, save for a few tedious cases such as balancing boxes while carrying them to a destination, but there is quite a lot to do outside of fighting, which is very refreshing.

Astral Chain brings together gameplay elements from all of Platinum’s best, from Bayonetta to Transformers Devastation, and adds the secret spice of detective work to tie it all together. It’s easy enough for newcomers to the genre, deep enough for veterans, and one of Platinum’s best.

David is the kind of person to wear his heart on his sleeve. He can find positives in anything, like this is a person who loved Star Fox Zero to death. You’ll see him playing all kinds of games: AAAs, Indies, game jam games, games of all genres, and writing about them! Here. On this website. When not writing or playing games, you can find David making music, games, or enjoying a good book. David’s favorite games include NieR: Automata, Mother 3, and Gravity Rush.
Related Articles: Astral Chain
Share
Tweet
Share
Submit