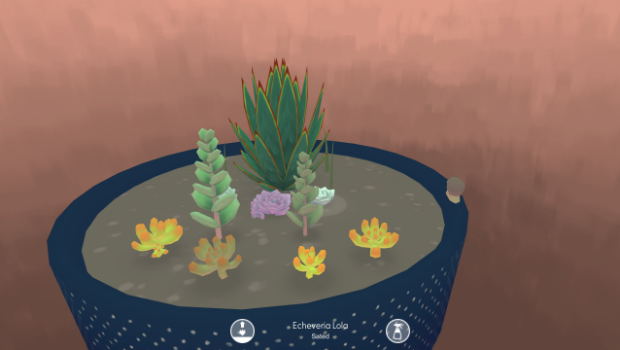 There are people who will never pay for, play, or even hear or speak of Viridi.  Those blessed children of luck and splendor will go through their life with their faith in gaming intact, taking to the grave a sort of pure and adorable innocence that playing Viridi robs you of with reckless abandon.  There are few greater crimes against the world of video gaming than Viridi, a succulents-based plant growing simulator from Ice Water Games.

While just from that opening description most would already be turned off to the idea, this reviewer came in with high hopes and big dreams for what could have been.  Instead of a game that delivers on the very simple concept of plant simulation, Viridi offers a bland and broken gaming experience.

Viridi is a plant-growing simulator, which means you have a plant pot with some plants in it.  If the multiple uses of the word “plants” is putting you to sleep, just imagine how you’ll feel if you actually play the game.  Using the term “simulator” instead of something like “virtual shrinky-dinks” is not just poor choice, but an outright lie.  The game claims to operate in “real-time,” but that is also a gigantic lie.  It does work slowly, but real-time is not even close to the progression of the game.  Plants grow quickly, rapidly moving up in size, even after only a few hours since planting.  There are absolutely no size measures in place for plant growth, so plants of the same type will grow at different rates based on indiscernible metrics.

You can water the plants, but they just take one spray and seem to stay watered for two days at a time.  The only activity is a function where zooming in on the plants and staying there will cause you to “sing” to them, improving their condition.  Plants start at the “thirsty” stage, and watering them makes them “sated.” When you use the zoom-and-sing function, the plant goes from “sated” to something like “vivacious” or “vibrant.”  It is the only thing you can do day-to-day, or multiple times a day.  If you sing to a plant for longer periods of time, the plant will grow faster.  It is incredibly stupid.

When you advertise your game as a real-world, real-time plant simulator, you cause the person interested to think certain things will happen like planting seeds in the soil, little sprouts growing, and days of returning to the game to eventually reap the benefits of your considerate care in a beautiful pot of well-grown plants.  Instead, Viridi just gives you a small version of the plant you’re going to have, and then scales it up.  It’s the laziest thing they could have possibly done.  It’s ugly, it’s uninteresting, and it’s an insult, frankly, to have used this as the “growth” of a plant.  Without any of the stages of growth or the true sense of long term care, the game plays exactly like pouring water on a growing sponge.

As if the experience of Viridi was not going to disappoint you and destroy enough of your life, the game also boasts some of the ugliest and most plain graphics that you’ll ever see in a modern game.  There is no retro-nostalgia value for the low-grade Nintendo 64-esque color refuse and splatter garbage that Viridi passes off as objects and backgrounds.

The pot is a curled disasterpiece with an Animal Crossing-style wallpaper plastered on the side, and the plants are just swaths or globules of a color with incredibly low detail.  Since the plants simply scale up, you never get any difference from the plants, so the already small incentive you have to water and grow your hideous polygonal succulent plant is culled further by the fact that you’ve already basically seen the end result.  The background is a vague splotchy watercolor that looks like grass.  It’s incredibly lame.  The only saving grace is a little snail companion that slowly circles the pot, if only because this relatively “fast-paced” snail action is the only active element you’re going to get in the otherwise completely static world of Viridi.

The music of Viridi is not that bad, but it is one song that plays on repeat.  It is incredibly soft and slow and very pretty, and fitting for a game about growing plants.  It can really put you to sleep, and that’s kind of counter-intuitive for playing a game.  It’s nothing special by any stretch, but in a game that otherwise came out so poorly, the music stands out as the games best feature.  Unfortunately for everyone on the planet, I have yet to reveal Viridi’s most sinister, vile, and irreparable feature.

As if this game were even worth the starter price tag of free, Viridi demands that you pay $4.99 to have a second pot of plants.  On top of that, buying seeds costs anywhere from $0.09 to $0.39 per plant in real world, hard earned American cash.  The microtransaction system is a terrible invention that plagues even great games, but when the game is as poorly conceived and created as Viridi, it is a slap in the face to everyone.  The idea that someone will spend money to simply watch a second pot of ugly plant sponges scale up over a few weeks disturbs me greatly.  I hope this article prevents any human considering taking that leap into the rivers of gaming petulism from diving in.

Viridi is a poor experience throughout. A plant growing simulator in name only, Viridi may never have the cultural impact to be considered one of the worst games ever made, but it certainly deserves consideration. There is no redeeming quality to a game that is boring, ugly, lazy, limited, confusing, and then also demands microtransactions. This game could be the worst mini-game in a Mario Party knock-off, but instead of that, it’s a full game. Stay away.

Patrick Rost has been with Gaming Trend since 2013. At first focused on sports coverage, Patrick has gone on to cover a wide range of games and other products for the website. Outside of Gaming Trend, Patrick writes and records music, grinds perpetually in Elder Scrolls Online (PS4), and lives day to day with his two dogs, Bob and Stella.
Related Articles: Viridi
Share
Tweet
Share
Submit