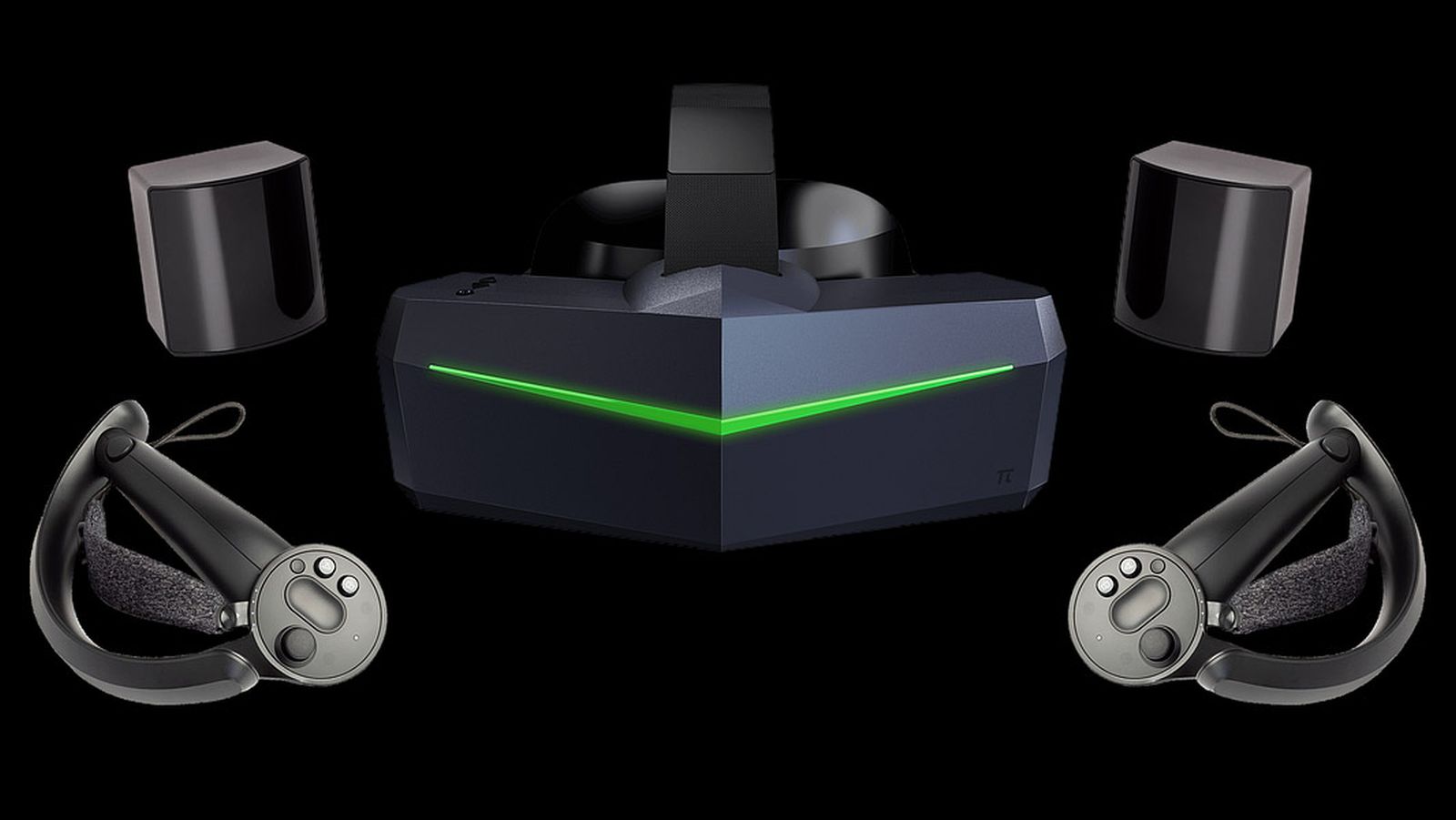 I’m a VR junkie. Not a “I own a headset or two” junkie, but a “I own nearly every VR headset” type. When I put my head into that primitive pterodactyl hunt tech demo garbage prototype back in the 90s, I was completely hooked. Over the last few years we’ve finally reached the point where Virtual Reality is not only viable, but incredibly immersive, entertaining, and engaging in ways we never imagined. Well, the last few HMDs to be released have been more compact, higher resolution, and cheaper, but they are also more derivative and iterative. It’s time for a radical improvement, and the team at Pimax are trying to do exactly that. Their newest flagship product, the Pimax Vision 8K X takes the very best any other headset has to offer, and essentially doubles it. Could this be the start of a new renaissance of virtual reality? Let’s unbox it and find out.

Before we get into the weeds, let’s look over the specs on the device. First and foremost, the 8K portion of the product name comes from pushing a whopping 3840 x 2160 resolution (better known as 4K) to each eye. It does this on a pair of fresnel CLPL lenses with an advertised refresh rate up to 114 Hz, and at an ultrawide 200 degree field of view.

The particular model we are reviewing comes with the KDMAS – a solid headstrap with an integrated pair of high-quality headphones. These can be removed and replaced with an also-included pair of headphones that rest against the ear instead of over it, allowing you to hear external sounds like your doorbell or a dog that needs to go outside. This solid strap is reminiscent of the one on Sony’s PlayStation VR, adjustable via a turn knob on the rear. It has padding both front and rear, and is angled to ensure that it rests in the saddle of your skull. This is helpful as the device itself has a combined weight of about 5.5 pounds. This might sound like a lot, especially when compared to the sveldt 1.9 pounds of the Oculus Quest 2, but hear me out – there’s more to that story. The Oculus Quest 2’s battery life is, frankly, terrible. As such, I’ve purchased a fairly significant battery that keeps it powered for longer play sessions. That battery distributes the weight to the rear of the headset, which pushes the weight up to…you guessed it, 5.5 pounds. In that context, it’s all down to comfort, and the Pimax 8K X, despite how outward appearances might suggest, is actually quite comfortable for extended play sessions. 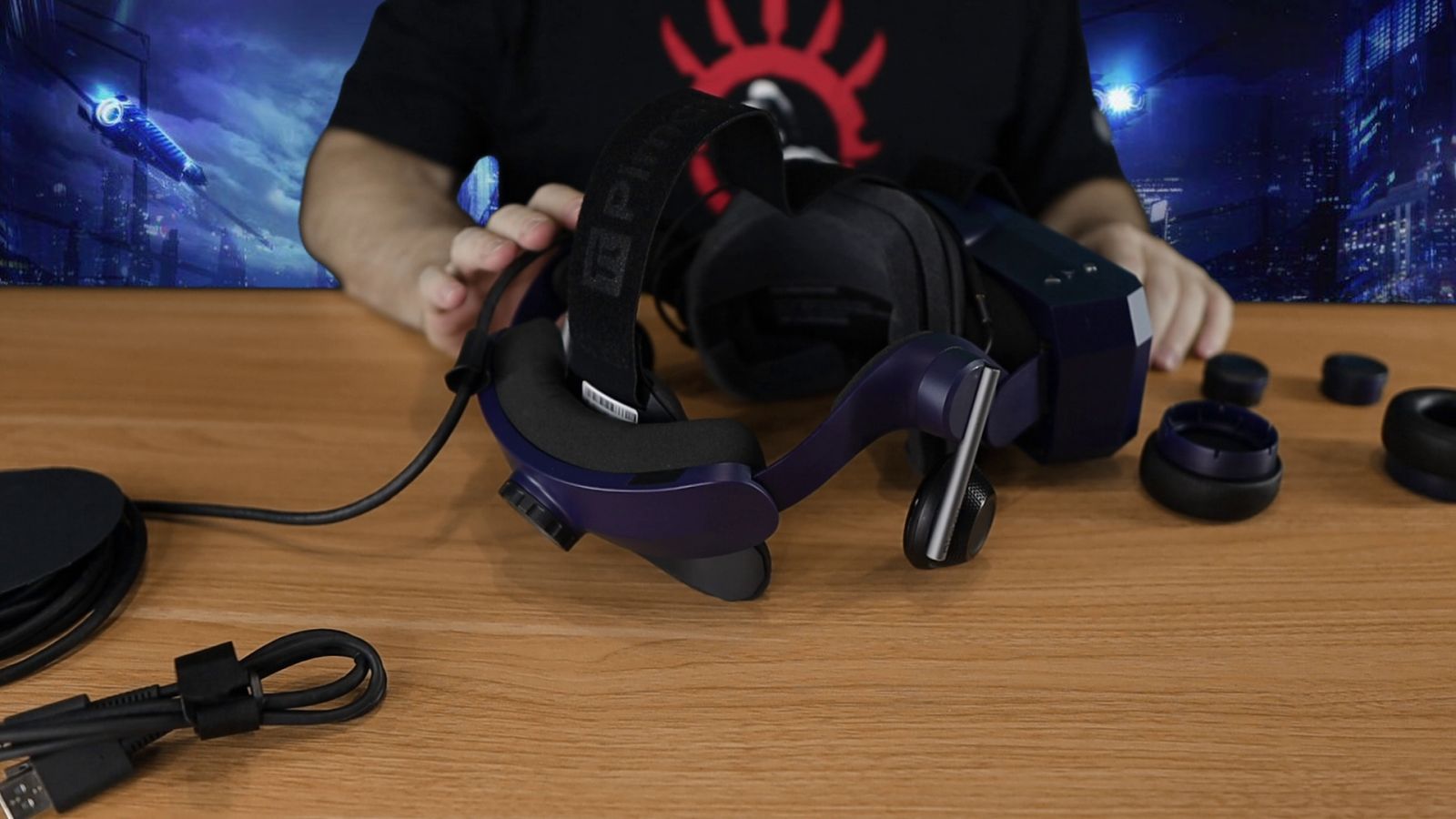 Pushing 8K worth of power to the Pimax 8K X requires a ton of graphical horsepower. So much so, in fact, that we simply don’t have a wide enough wireless band to allow it to be wire-free. To connect the Pimax 8K X you’ll just need one USB 2.0, one USB 3.0 and one DisplayPort 1.4 connection – no external box or power is required. Plugging in the device and pressing the power button on the upper right of the headset brings it to life, as indicated by the soft green glow spanning the width of the device. Adding googly eyes is entirely optional, but heartily recommended – the bigger the better.

With the device connected, I recommend loading up the Pitool software from the official site. This is used for firmware updates and has much of the same setup as Steam VR’s Room Guide system, letting you define your boundaries, map a controller, check your base stations, add extra trackers, and even launch games. You can also make some critical adjustments here that you should get familiar with asap – specifically the ones that let you set your refresh rate, resolution, and Inter-Pupillary Distance, or IPD. IPD is the measure of the distance between your two pupils and is one of the largest factors in VR comfort and nausea, outside of framerate, so learning your number and sticking with it goes a long way. The Pimax 8K X supports IPD of 60mm~72mm which should fit most heads. 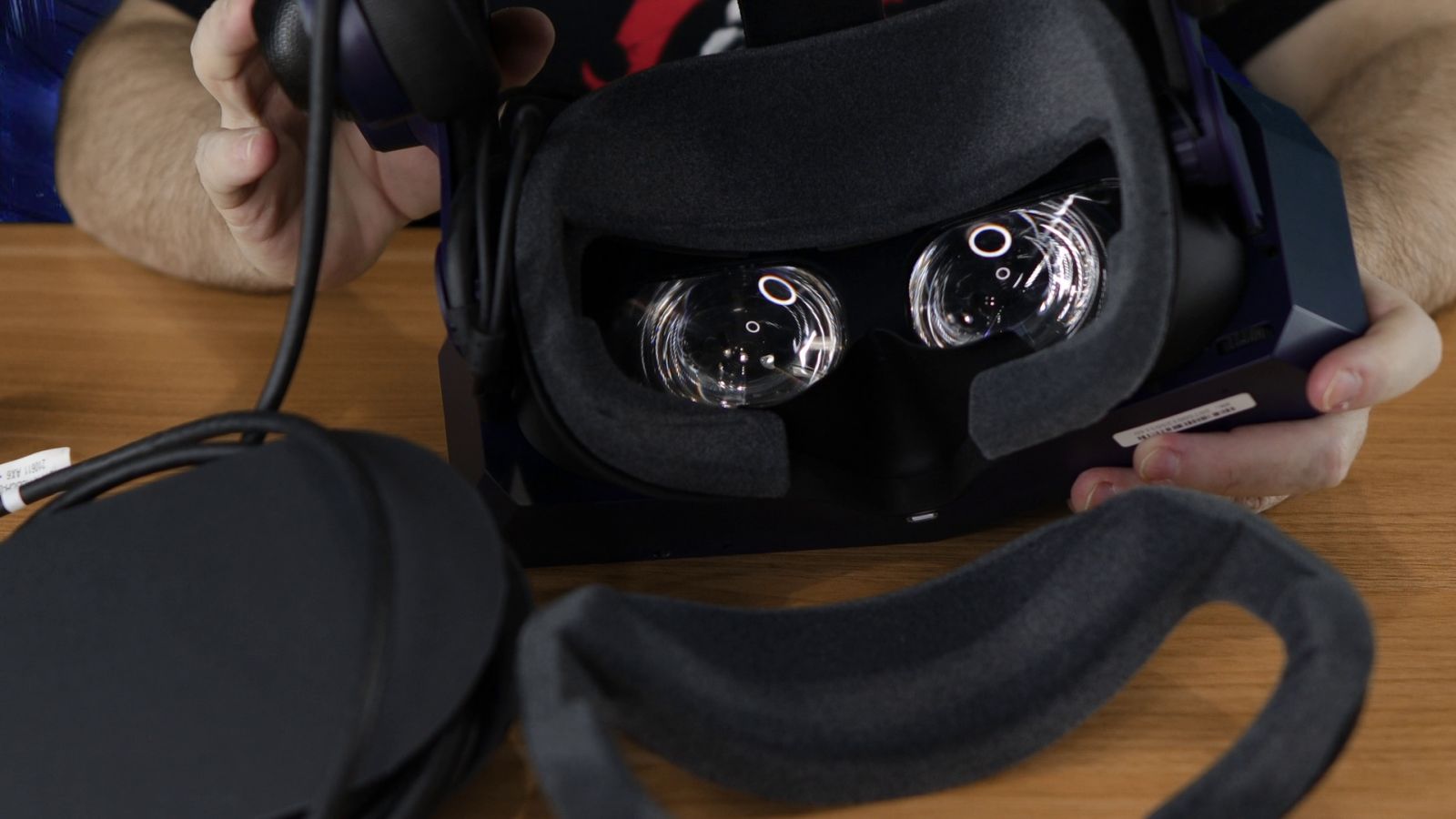 If you are using a 3000 series card, you should be good to run the Pimax 8K X at default settings, but you’ll want as much oomph as you can afford if you plan to push that refresh rate up to 114 Hz. You can tinker with the resolution, running various upscaling settings in the aim of maintaining a stable and smooth framerate above 90. I’m running an RTX 3080 Ti, so there’s no need for that – this is a premium headset, and I’m feeding it with premium hardware…and it is glorious.

Inside the PiTool you’ll also find the “Field of View” setting, with a dubious naming convention of “Small, Normal, Large, and Potato (and no, the last one isn’t a joke)”. Small sets the field of view to 120 degrees – impressive in its own right as that’s the same FOV as the HTC Vive 2, Valve Index, and just slightly more than the 110 the Vive Cosmos has. It beats the pants off the 90 degrees of the Oculus Quest 2, but let’s move on to bigger and better.

The Normal setting sets the FOV to 150 degrees which will begin to push your videocard a bit. It’s the default, and it’s better than everything else out there, so you might start here to measure performance. 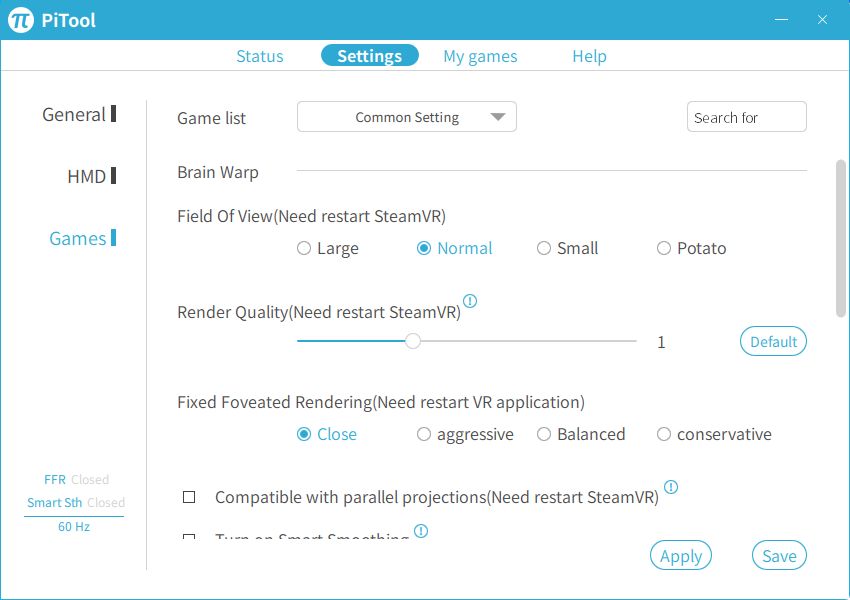 Large pushes the Pimax 8K X to the limit – 170 degrees. It’s not the 200 that the team has advertised, but it’s very close. In fact, it’s vastly wider than any headset on the market by a large margin. It also demands a lot more horsepower than what a 2000-series GPU can handle, and likely is even too much for lower end 3000-series cards. Low framerates and FOV stutters can mean instant nausea, so test before you fly. It’s just exciting that we are finally seeing VR headsets that approximate the 180 degrees of a human eye.

As for Potato…well, let’s just skip the 90 degree field of view on that setting. You don’t buy a Ferrari to drive in the slow lane.

Putting on the Pimax 8K X for the first time I have to admit that I was disoriented and felt a little nauseous. The extra field of view had my head swimming for about two minutes before suddenly my brain stopped fighting it and relaxed into it. There is the smallest bit of distortion at the edges, which is a likely consequence of the width of the Fresnel lenses. With your eyes fixed dead center, it’s not unlike your normal vision which also features a bit of blurriness in your peripheral vision. Jumping into the water in games like Subnautica makes you forget all about that, however, as the panoramic landscape is absolutely breathtaking. Subnautica and its sequel are both gorgeous on a flat screen, but seeing it in virtual reality is absolutely magical – at least till one of those Leviathan bastards takes a bite out of your face out of nowhere.

In terms of visual quality, the Pimax 8K X has the highest resolution of any headset on the market, as well as the widest FOV, so which is more important? Well, having sampled quite a few HMDs myself, I have to say that a stable framerate at a higher field of view is more immersive than the highest possible resolution. Frames make games, and that goes double for VR. 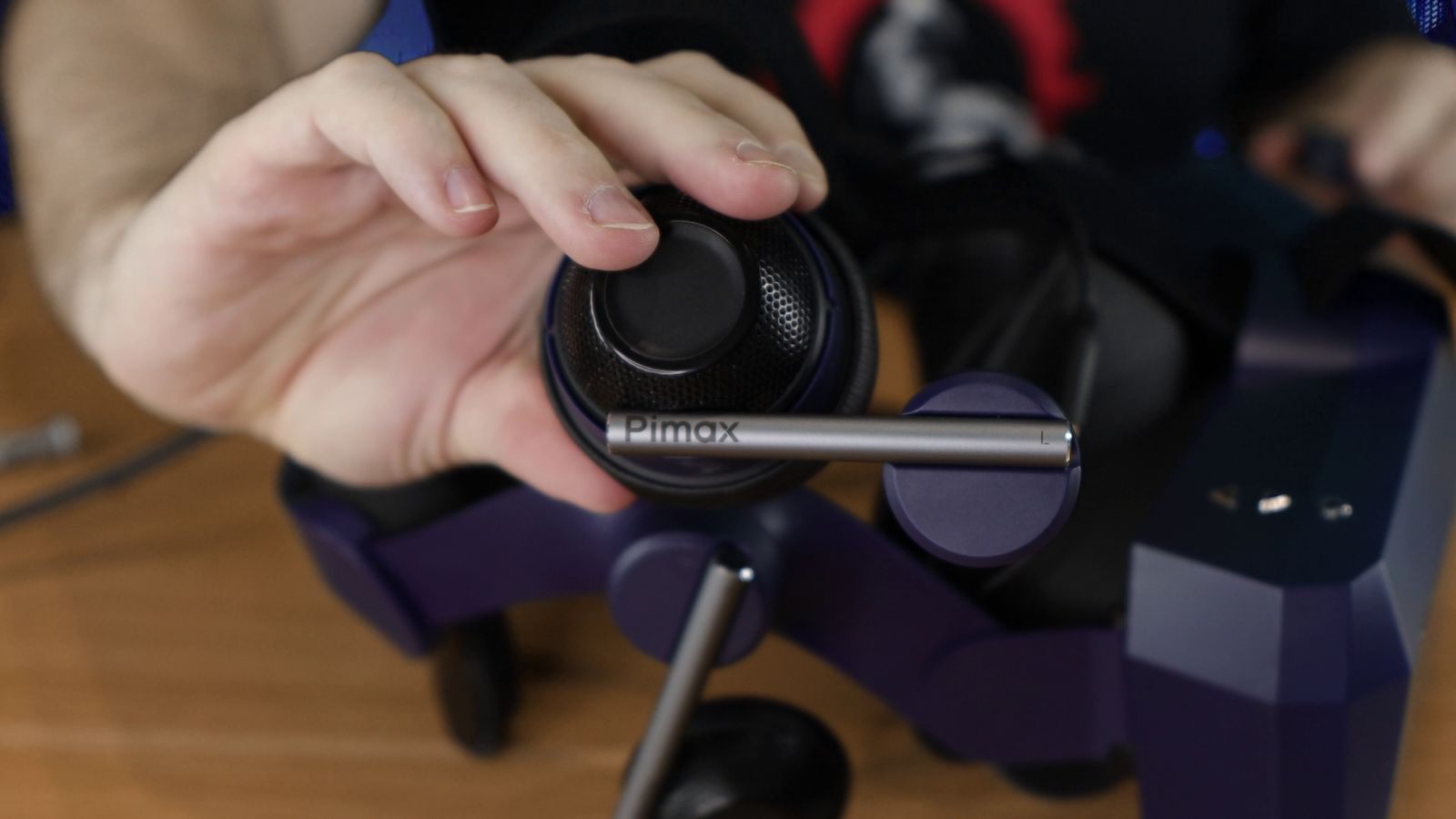 Behind the fresnel lenses lies the two screens that provide your VR experience. These are a custom low-persistence liquid LED screen, allowing Pimax to keep their prices low. LED displays don’t carry the same deep blacks, but the colors are rich and vibrant. The black levels, thankfully, are still more saturated than you’d expect – something you’ll both appreciate and dread in games like Half Life: Alyx where the darkness hides chittering little monsters that like to spring out and hug your face.

The audio quality on the KDMAS is actually pretty solid. It’s on par with what you’ll get out of the Deluxe Audio Strap from HTC, and miles ahead of the tiny slits in the side of the Oculus Quest 2. It’s not going to beat a standalone headset from the likes of Turtle Beach, but that’s hardly a surprise. I was, however, surprised at how good the bone-conductive off-ear headphones are. They aren’t going to rock your world, but they do deliver some solid bass and enough sound to keep you in the game, but still let you hear external sounds. It’s easy enough to use the 3.5mm audio jack to swap in a headset with a microphone if you don’t like the sound, so you are set either way, and you can get the modular audio strap separately and without the headphones if you are inclined.

After a solid month of use, I came away surprised at how comfortable and powerful the Pimax 8K X really is. The solid band headset kept the HMD in place even during workouts like Litebox VR, as well as more agility-based games like Onward, Beat Saber, or Synth Riders. Paired with a pair of Knuckle controllers, I ended up running through Half Life: Alyx all over again, only this time I could see every disgusting detail on the headcrabs, read every dimly-lit sign, and drink in all of the exquisite grossness of crawling around the underbelly of City 17. The visuals are simply unparalleled, but with one caveat. 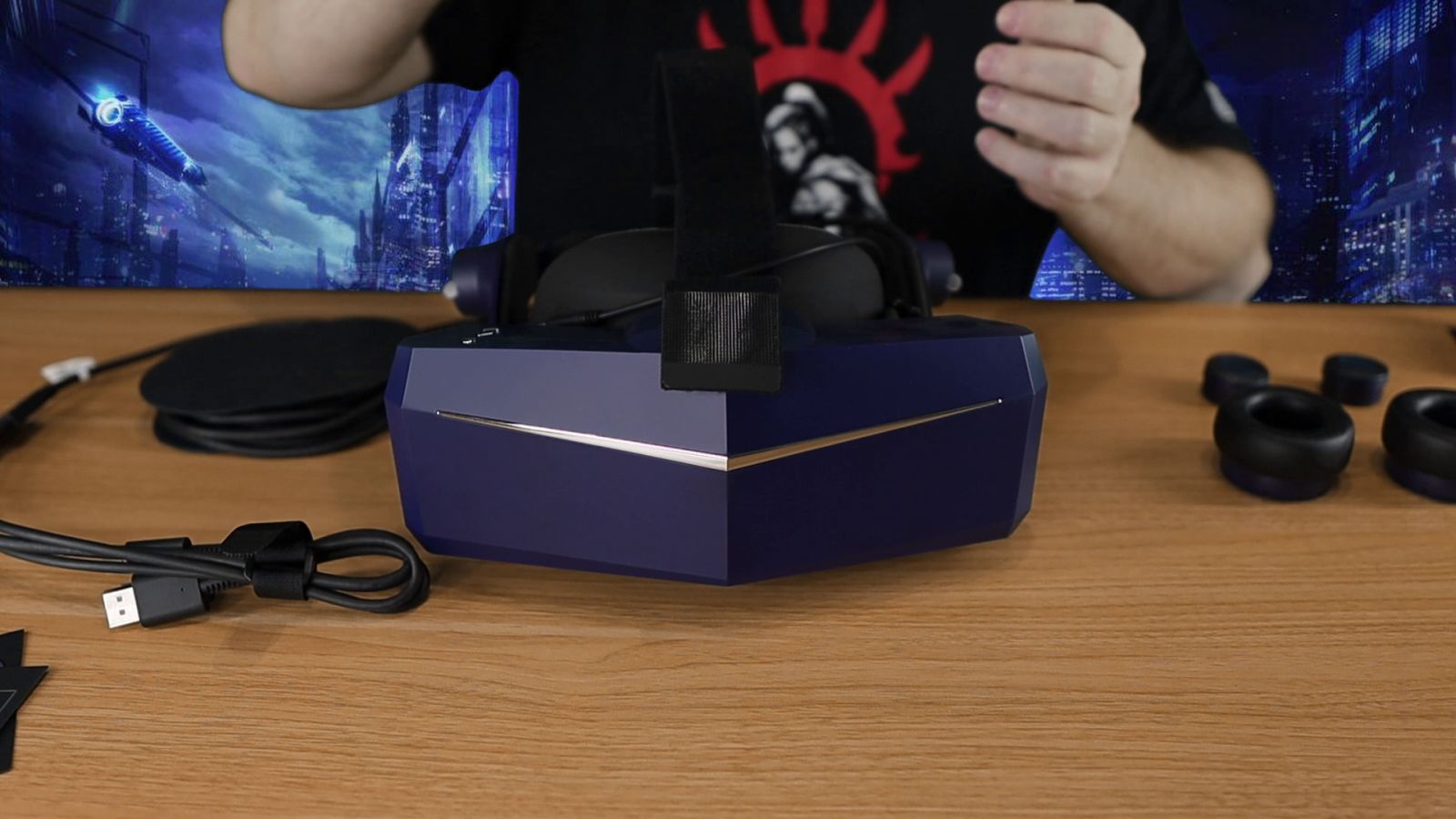 There are only two real considerations when it comes to whether or not you should pick up a Pimax 8K X – power and cost. Put simply, if you are going to buy a headset that costs $1,125, you are going to want to pair it with a similarly-powered videocard. The minimum spec simply says “20-series” but in our own testing, even a 2080 Ti can’t handle the higher resolutions and refresh rates. To squeeze the Pimax for everything it’s worth, you are probably going to want a 3070 or better. The good news is that even if you don’t have one of those, the device will still work, and when you can lay your hands on a better GPU you’ll be able to take full advantage.

I can’t make a value judgment for you as it’s largely dependent on how often you are playing VR, and what headsets you already have. If you need the whole shebang, you’ll want to set aside some additional cash for lighthouses and controllers as the Pimax 8K X as priced is the headset only. I personally have spent a few thousand hours in virtual reality, so for me it’s a no brainer.

You can find and purchase the Pimax 8K X on Amazon and the Pimax official site.

Ron Burke is the Editor in Chief for Gaming Trend. Currently living in Fort Worth, Texas, Ron is an old-school gamer who enjoys CRPGs, action/adventure, platformers, music games, and has recently gotten into tabletop gaming. Ron is also a fourth degree black belt, with a Master's rank in Matsumura Seito Shōrin-ryū, Moo Duk Kwan Tang Soo Do, Universal Tang Soo Do Alliance, and International Tang Soo Do Federation. He also holds ranks in several other styles in his search to be a well-rounded fighter. Ron has been married to Gaming Trend Editor, Laura Burke, for 21 years. They have three dogs - Pazuzu (Irish Terrier), Atë, and Calliope (both Australian Kelpie/Pit Bull mixes).
Related Articles: Hardware, Pimax Vision 8K X, VR
Share
Tweet
Share
Submit