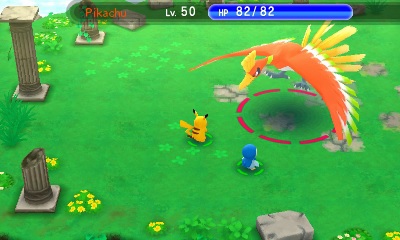 I’m captivated by games which features roguelike elements and dynamically generated content. Pokemon? Admittedly, I’m ambivalent. But when I heard that Pokemon Super Mystery Dungeon was out on the 3DS, I had to give it a shot. I was hoping for a decent roguelike title in convenient portable form. What I ended up getting was a pretty fun and light-hearted dungeon crawler with a fun, cutesy Pokemon story – a game I think any young kid with a budding love for tactical gameplay would enjoy. Armed with a slew of features, including a whopping 720 pokemon to ally or interact with, Pokemon Super Mystery Dungeon (hereafter PSMD) is a great game for introducing a child/pokemon fanatic into the shallow end of the shark-laden pool that is the roguelike genre.

It’s been ages since I played a title in the Mystery Dungeon line, and about as long since I picked up a pokemon game for more than a brief look, but I’ve heard that the PSMD story follows a familiar pattern. The player wakes up with a case of amnesia and a change of species: in this case, one of a variety of different pokemon monsters, which can either be particularly selected or chosen via a ‘personality test’. After selecting your child-aged pokemon avatar, you’re off on an adventure of making friends, discovering what’s happened to you, and eventually dealing with a the ominous forces that have chaos in store for the otherwise peaceful pokemon-laden world. Key to the adventure is the exploration of progressively more dangerous dungeons, each of which features randomized layouts and content, forcing the player to rely on turn-based tactical thinking rather than simply following a step-by-step guide to victory.

The adorable, cuddly Pikachu, moments away from delivering a truly epic beatdown.

For those unfamiliar with the Mystery Dungeon gameplay, here’s a basic rundown: while the game is turn based, the player and the monsters they encounter all make their moves roughly simultaneously. Move a space in the dungeon, and the monsters can move a space in the dungeon as well. If you attack a monster standing next to you, the monster can move or attack immediately. This leads to all manner of tactical considerations: if a monster is a space away from you and you move forward, your turn will complete with you next to them, so they can get a ‘free’ attack on you. If you instead attack the empty space in front of you, the enemy’s turn will then take place, leaving them (if they’re not a very tactically-minded beast) free to step forward and allow you to hit them first instead. Or maybe you’re in a fight that isn’t going so well. Do you use a healing item on yourself even though that will let your enemy get another attack in on you after you’re healed? Or do you choose to run away instead, with your opponent always one step behind you? It’s just simple enough for anyone to grasp, but deep enough to feature some thoughtful complexity.

Of course, I’m just outlining the basics of the system. On top of all of this, PSMD introduces all kinds of other tactical considerations: a wide variety of items to use which do everything from restore your pokemon’s health to give them a special attack to use. Additional pokemon can be allied with to help you fight in the dungeons, while also allowing combo moves to be pulled off. Status effects can afflict your pokemon, leading to ‘confusion’ where you won’t always move or attack in the direction you intended, or poison effects that will slowly deplete your health over time. Moving or simply attacking empty space in front of you will heal your character between conflicts, unless your hunger meter depletes, leading to a steady loss of life over time. There’s a lot to consider, and for any gamer who enjoys learning new tricks or coming across items and powers they haven’t encountered before, PMSD has a lot going for it.

I said at the start of the review that what originally caught my interested with PSMD were the dynamic, roguelike aspects of it. While the title certainly has those features going for it – including the loss of currently held items or coins when getting knocked out in a dungeon – the fact remains that this is ultimately a title that children are meant to enjoy. That means that, for the sheer diversity of features, items and pokemon present in the game, there’s still a lingering sort of shallowness which is present, and to be expected when the game is primarily made for gamers who know it’s lunchtime by the sound of a shrill, ringing bell. It’s not something I can hold against the title, but it’s worth keeping in mind for anyone who (like me) picked it up primarily out of a desire to see if my desire for very challenging gameplay would mesh well with the colorful but ultimately kid-oriented world of pokemon. If you want deep, Nethack-like difficult and complexity, you’ll be disappointed here.

But for gamers who are on the younger side – or who want a cute pokemon game with a lot of creatures to encounter and defeat, even if it feels a bit on the easier side – PSMD remains a pretty fun game. It’s loaded with pokemon to encounter, features to unlock and play around with, all implemented with that distinctly touching Nintendo charm. For fans of the Pokemon series, simply being able to encounter, catch and defeat hundreds of 3D-rendered pokemon in a game distinct from the ‘main’ series will probably be enough to make this title a must-have. While it’s a side-story to the main games, PSMD is a delightful addition to the Pokemon world.

Pokemon Super Mystery Dungeon offers a fun glimpse into the Pokemon world from the monsters' perspective, all while providing a unique, turn-based tactical gameplay with light roguelike features. Featuring over 700 pokemon to encounter, fight and team up with, it's a must-have for any dedicated fans of the series, and provides just enough tactical thinking to entertain a budding CRPG player.

Victor Grunn has been a gamer since the days of single-button joysticks and the Atari 800XL. When not lamenting the loss of the Ultima series or setting people on fire in Team Fortress 2, he's an aspiring indie game developer and freelance writer.
Related Articles: Pokemon Super Mystery Dungeon
Share
Tweet
Share
Submit