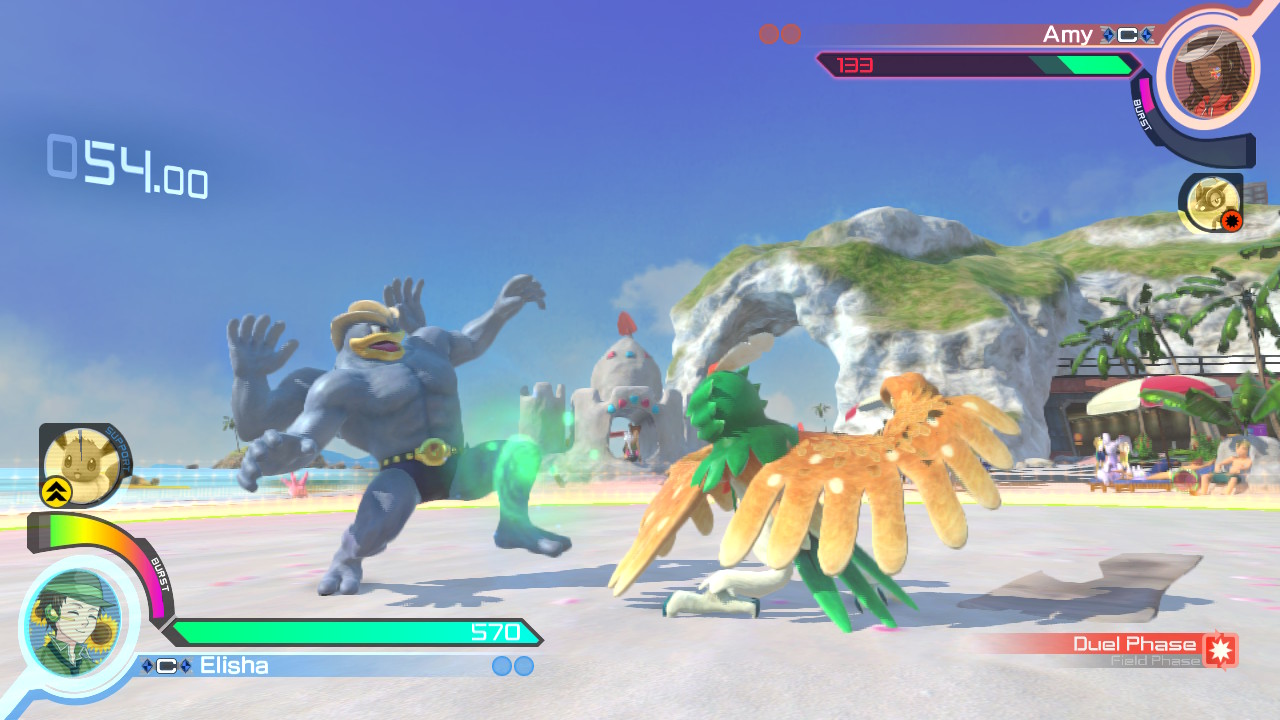 Decidueye is ready to battle!

When it was released during the Wii U twilight year of 2016, Pokken Tournament was the fighting game nobody expected; Matt’s review of the game was a positive one, with some criticisms aimed at the roster selection and leveling mechanics. With the Switch getting some excellent ports in the form of Mario Kart 8 Deluxe and Rayman Legends: Definitive Edition, it’s Pokken Tournament’s turn to bask in the Switch enhancements. Pokken Tournament Deluxe is a surprisingly refreshing fighting game for veterans and newbies alike, and the added features make this an easy recommendation even if you’ve already experienced the original.

Fight of the Pikachus!

The Pokémon franchise is built on battling opponents, and Pokken Tournament holds that fundamental mechanic in place, albeit in a different genre. The Ferrum League encourages healthy competition through the use of Gaia, an element that allows synergy between a trainer and their Pokémon. (Plus apparently there are hundreds of people who own a Suicune.) The game features 1v1 battles between two Pokémon as they fight in a battlefield. Using different attacks, you switch between field phase (which includes open-ended movement) and duel phase (which operates on a 2D plane). Different attacks will trigger this phase shift, and it’s up to you to try and outmaneuver your opponent in order to get the upper hand.

Additionally, there are support Pokémon that you can select beforehand in order to assist you at certain times, and synergy bursts, which you can pull off once you fill your synergy gauge by either giving or receiving enough damage. These super powered forms will often change the appearance of your fighter (usually in the form of a mega evolution ala Pokémon X and Y) and give them access to a move that, if it connects, will take a chunk of life out of an opponent. Once someone’s HP goes down to zero, the other person wins. During rounds, your support person Nia will also cheer you on with different techniques, from increased synergy gauge after each round or an instant use of support Pokémon.

While Matt already covered most of the basic features in his review of the Wii U version, I wanted to go through some added features of Pokken Tournament Deluxe. The visuals, for the most part, are improved, and run consistently with no framerate dips except for the rare instance in split-screen multiplayer. The original Wii U version only had sixteen characters (two of which were different versions of the same Pokémon), with none of the other characters added to the arcade version since the update. Deluxe adds five new Pokémon (Empoleon, Scizor, Darkrai, and Croagunk from the arcade version), including the exclusive Decidueye (which officially makes Sun and Moon represented in-game). Decidueye is my new main, and has a style that employs the use of arrows and flight. It kind of reminds me of Hawkeye, to be honest, and I love it so.

These new additions more than make up the purchase, bringing the total amount of available characters up to 21; large enough for variety but intimate enough to highlight the differences between each Pokémon. Different Pokémon also fall into different categories: normal, technical, power, and speed, and adding more characters in the mix means more time getting to know each character’s strengths and vulnerabilities. Even though the general controls are universally the same for all fighters, their eclectic personalities and moves set them apart from each other; even Pikachu is different from Pikachu Libre (the former hits harder than the latter, but is slower and thus can succumb to the latter’s speed). I loved the variety, and hopefully Nintendo can release more Pokémon post-release ala Arms. (Wouldn’t Hawlucha be perfect for this game?)

Decidueye’s addition to the roster isn’t the only Sun and Moon content in the game, as Litten and Popplio join as support Pokémon, and Thalia Beach makes an appearance as a new stage included specifically for Deluxe. Furthermore, everything related to gameplay is unlocked from the beginning, so you won’t have to keep grinding to get Shadow Mewtwo if you already played the original release. This might cause some concern, since the only unlockable things you can get are level ups, titles, and clothing for your in-game avatar, but I found it a good decision as it allowed me to get into battling with my favorite support set and cheer instantly. You can also level up your Pokémon through battling, which will give them an advantage with everything from attack and defense to synergy burst usage and support usage cooldown, so that grind is still present for those that want to get better at the game.

Other than characters and stages, the existing modes have been modified to make the core experience a little meatier. The Ferrum League is your main single-player mode, where you’ll fight against different AI opponents in order to go up different ranks and become the champion. The story campaign included is a bit of a weak point; it’s pretty shoehorned into the gameplay, and the voice acting is subpar compared to the rest of the game. The mythos surrounding Shadow Mewtwo was, admittedly, interesting the first time I experienced it on Wii U, but now it just comes off as weak and superfluous.

Related to this mode, there are optional in-game achievements that will unlock different cosmetic items, Poké gold (in-game currency), and battle titles. These tasks can range from calling a support Pokémon a certain number of times or winning with a particular Pokémon. It’s a nice little touch that will have you replaying lower-level league battles even after you’ve finished. It’s still cumbersome to keep switching your main Pokémon out when you want to play with someone else, but it’s only a minor inconvenience in the grand scheme of things.

For those that want a little random variety, daily challenges appear where you must satisfy the condition for battles with predetermined Pokémon. Winning these challenges will give a couple Pokémon an instant level up, which will give you more skill points. This forces you to be competent with other characters and is a good way to train up while adding a few levels to other characters. 3v3 battles have also been introduced, where you pick a team of three Pokémon that fight each other in 1v1 matches until one person loses all three of their Pokémon. It’s a nice touch that might not be for everyone, but I’m happy for its inclusion.

Multiplayer has been revamped to fit the Switch’s technology as well. Because there aren’t two separate screens like the Wii U, versus gameplay can either be played with two Switch consoles, the regular single-player view, or a split-screen view. I love the versatility of the Switch, and the new ways to play with others make it a whole new experience to play with friends. The only minor flaw I can find with this is with the split-screen multiplayer mode, which does make the game perform a little worse ala Mario Kart 8 Deluxe with four players. However, it still runs without framerate dips, so if you can stomach a lesser framerate, then it’s still fine. You can also play the game with a single Joy-Con controller, which, while cramped, is perfect for on-the-go gaming. Finally, I can suplex my friend’s Scizor with Pikachu Libre while on the train! All in all, the new features make the existing modes feel fuller, and I appreciate the variety of playstyles.

Pokken Tournament Deluxe is a knockout fighting game that’s perfect for the Switch. With new characters, revamped game modes, and the ability to take the game anywhere, this is one Pokémon game you should fight for this fall.

Elisha Deogracias is an aspiring accountant by day, freelance writer by night. Before writing for Gaming Trend, he had a small gig on the now defunct Examiner. When not being a third wheel with his best friends on dates or yearning for some closure on Pushing Daisies, he's busy catching up on shonen manga and wacky rhythm games. Mains R.O.B. in Smash. Still doesn't know if he's a kid or a squid.
Related Articles: Pokken Tournament DX
Share
Tweet
Share
Submit