I remember hanging out with my grandmother one weekend in 2006, after we got lunch she surprised me with a copy of Pokémon Mystery Dungeon: Blue Rescue Team on the DS. It’s a memory that, strangely, sticks firmly in my mind. I remember starting it up on the car ride home, and after taking the quiz the game determined I was a Squirtle with Pikachu as my partner. Whenever I think of the Pokémon Mystery Dungeon games, I always think of that day with my grandma. Maybe it’s because she’s such a great grandmother, maybe it’s because I played that game so much, or maybe it’s both. Whatever the reason, this series holds a very special place in my heart, particularly the first two games. I haven’t been a fan of where the spinoff has gone recently, with very simple plots and slow gameplay, so it’s nice to see it return to its roots with a remake of the first game in Pokémon Mystery Dungeon: Rescue Team DX. So, does the game hold up, or am I just blinded by nostalgia?

Pokémon Mystery Dungeon: Rescue Team begins with you waking up in a strange world. It seems that only Pokémon inhabit this world, and after taking a short quiz, you’re shocked to see that you’ve become one yourself! But there’s no time to worry about that right now, someone’s in trouble and it’s up to you to rescue them. After a series of events, you and your new friend, in my case a Pikachu, decide to form a rescue team to help fellow Pokémon, find out how you came to be in this world, and how you can get back home. It’s a premise that every game in the series follows, but it does its job of giving you a central mystery to solve. Being on a rescue team involves entering Mystery Dungeons, places that change their layout every time you enter. Like the classic Rogue, you’ll explore randomly generated areas to find items, fight Pokémon, and recruit new friends to your side. 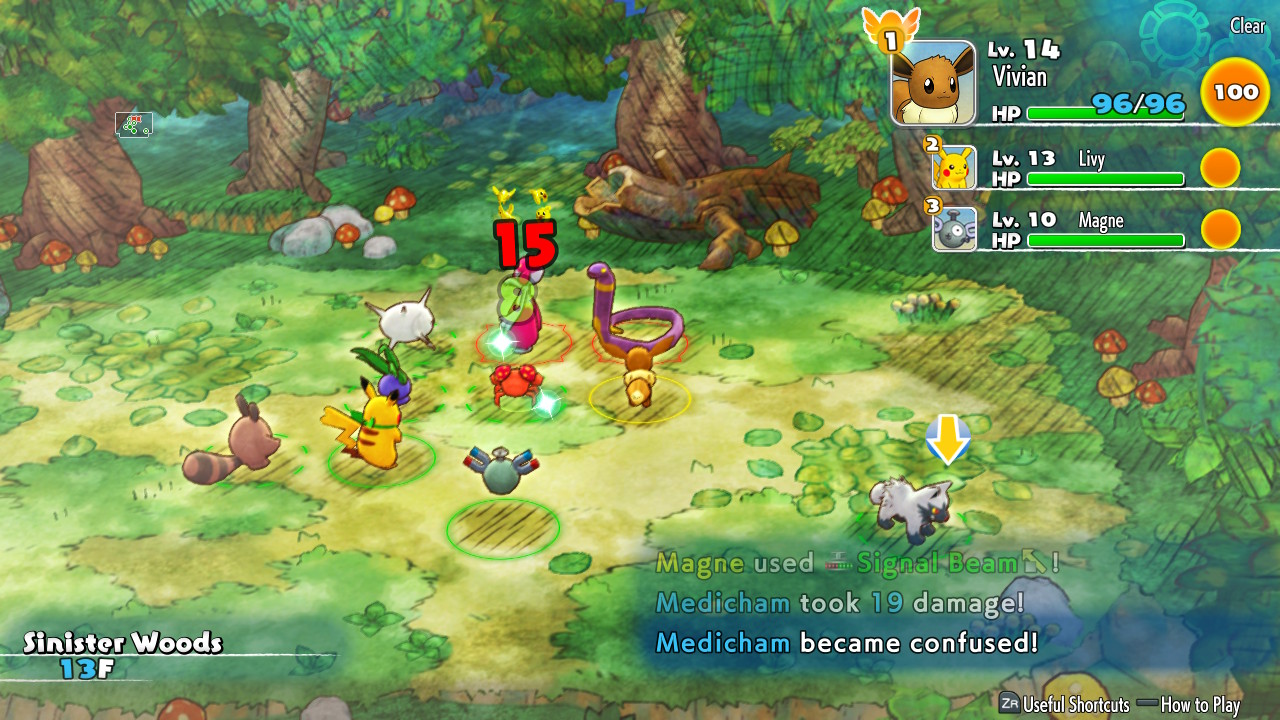 From what I remember, it’s actually much easier to get Pokémon to join your team than in the original, especially with the new Rare Qualities system. After defeating a Pokémon in battle or helping a fainted Pokémon, they may ask to join your team and, if you accept, they’ll instantly begin fighting by your side. Including your party of three, you’re able to have up to eight Pokémon in your team at the same time. At first I thought this would make the game much easier, but that doesn’t seem to be the case. Compared to the mainline titles, Mystery Dungeon presents a fairly decent challenge. Thanks to the online rescue system, I was never kicked out of a dungeon, but I still died a few times throughout the journey. While the main story is pretty easy and surprisingly short, the endgame has a ton of things to do and is much more challenging as well. It’s refreshing to actually have to think about what moves to use and where you should be positioned when battling.

In dungeons, everything takes place on a grid. Most Pokémon take up one square of that grid, and each character can take an action, such as moving, attacking, or using an item, once their “turn” comes around. I say turn, but it’s not entirely turn based. Yes, while nothing will happen unless you take your turn, you’re never waiting around for enemies off screen to move before you can do something. Unless you’re in combat, it feels like everyone takes their actions at the same time. Your main goal on each floor is to simply find the stairs, but you’ll want to explore and find items to help you survive. You can find items that restore health, food to stave off starvation, cure statuses, debuff foes, or even change the layout of the dungeon itself. You’re unlikely to face defeat in any single encounter, but the real challenge comes from managing your resources efficiently. You might not have packed enough food for the journey, and end up going hungry, taking constant damage while you scavenge for apples. It’s a lot of fun to go into a long dungeon with tons of resources, only to end up really thinking out who really needs to be healed or if it’s worth trying to pick up that item with the sleeping Pokémon next to it. One resource that I didn’t really need to manage was Power Points. Whenever a move ran out of PP, I had a plethora of ether to restore PP at any given moment. By the end, I had over 50 PP restoring items and at least two pages of inventory filled with the things. Dungeons are absolutely filled with them, so you never need to worry about running out of moves. Personally, I would have enjoyed having another resource to manage, but I can see how children may find that mechanic frustrating.

Rescue Team DX has a few new features to keep returning players interested. Right off the bat if you don’t want to play as the Pokémon the quiz assigns you, you can choose for yourself. It’s a good quality of life change, even if it only matters at the very start of the game. Pokémon can also acquire Rare Qualities, abilities that affect your whole party such as being able to sell items for more money in dungeon shops or healing more HP while in a corridor. These can actually affect your approach to certain situations significantly. Early on, my Eevee got a quality that allowed party members to switch places to attack enemies in small hallways, allowing possibly my entire team of Pokémon to attack at once. This gives my team a huge advantage in hallways as opposed to larger rooms; only the front character gets attacked while the rest can dish out huge damage. The last two significant changes are an auto mode in dungeon, which lets the computer explore for you, and Mega Evolutions. If you use a certain item on a Pokémon, they can either become awakened or Mega Evolve, both of which grant stat bonuses. However, enemies can also become awakened or Mega Evolve if they defeat a Pokémon, which can make for some truly formidable encounters.

Lastly, let’s talk about the most striking change: the visuals. The game looks like a watercolor painting, and it’s breathtaking the whole way through. After playing this version and booting up the sprite based original, I never want to go back. While I adore sprite work, the original just looks drab and colorless when compared to DX. I especially love the canvas-like texture everything has, like your TV is actually a moving painting. The music has also been updated slightly, however some songs will still use instruments the GBA could produce, which felt out of place in this gigantic update. While I enjoyed the music and it never became grating through the 25 or so hours I played, there wasn’t a track that stood out among the rest.

Pokémon Mystery Dungeon: Rescue Team DX is a delightful update to a classic, and just the kick in the pants the series needed. It’s a return to what made the spinoff so beloved in the first place, from the emotional story to the difficult resource management and boss fights. With a gorgeous watercolor art style, the world of Pokémon has never looked better.

David is the kind of person to wear his heart on his sleeve. He can find positives in anything, like this is a person who loved Star Fox Zero to death. You’ll see him playing all kinds of games: AAAs, Indies, game jam games, games of all genres, and writing about them! Here. On this website. When not writing or playing games, you can find David making music, games, or enjoying a good book. David’s favorite games include NieR: Automata, Mother 3, and Gravity Rush.
Related Articles: Pokémon Mystery Dungeon: Rescue Team DX
Share
Tweet
Share
Submit