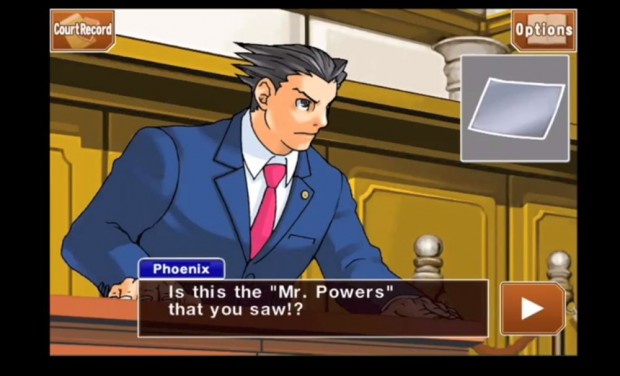 Phoenix Wright: Ace Attorney Trilogy is a “visual novel adventure game,” which is a fancy way of saying that it’s more like an interactive novel than a traditional video game. To some this may seem like a dull experience, and a year ago I would have shared that sentiment to some degree. However, as it turns out an interactive book can not only be a ton of fun, but is also exactly the type of game that I’ve been searching for in all those environments that are normally less-than-ideal for gaming. For example, there aren’t many games that I can get into while riding the bus, or an airplane, or when I’m simply not in the mood for anything that takes more than a low level of energy to enjoy. The Ace Attorney games are the perfect answer to all of these, and so are effectively the kind of portable game that I never knew I wanted.

In Phoenix Wright: Ace Attorney Trilogy, players step into the shoes of a snarky rookie defense attorney named Phoenix Wright. The story follows various murder investigations and the court proceedings that follow, some of which are cases very personal to Phoenix (meaning the accused are his friends, loved ones, or even himself), and others which are simply unfamiliar clients that hire him as their attorney. Over the course of the trilogy, Phoenix Wright undergoes every trial and tribulation imaginable as he becomes a seasoned defense attorney, known worldwide for being able to uncover the truth and prove his client innocent despite insurmountable odds.

The characters, relationships, and quotable themes, such as “Never give up on a client,” and “Search for the truth no matter what” grow on the player steadily, which is made possible with great writing, dialogue, and an incredibly complex overarching story that endears itself to the player with each passing case. Phoenix Wright: Ace Attorney Trilogy’s tone manages to balance ridiculous comedy with extremely serious moments in a way that keeps the player invested and the experience worthwhile.

The original Phoenix Wright: Ace Attorney tells the story of Phoenix’s first cases immediately following law school. At this stage, Phoenix Wright is at his most naive and so hilarity ensues as he tries to figure out how to be a lawyer in the middle of each trial, although he quickly develops a knack for it. At the center of the story is Phoenix’s relationship with prosecutor Miles Edgeworth, as well as why Phoenix decided to pursue a career as a defense attorney in the first place. Through the title’s many twists and turns, a charming and emotional story unfolds that ends with Phoenix Wright becoming a bonafide lawyer, and saving the livelihood of many of his friends in the process.

In terms of gameplay, Phoenix Wright: Ace Attorney is the most straightforward. Investigation sequences don’t require much heavy lifting, and the trials are fairly straightforward, aside from a few particularly difficult cross-examinations. This doesn’t mean that the game is boring by any means, but as the first game in the series, some of the more nuanced mechanics hadn’t yet been introduced, which we’ll get to later. It is also the shortest of the Ace Attorney games, with two of the four cases being fairly brief, but they’ve included the optional/add-on case that was introduced in the DS/iOS ports of the game that makes up for this nicely.

Phoenix Wright: Ace Attorney: Justice for All takes place one year after the events of the first game, and is the dark second chapter of the trilogy. Phoenix has begun to achieve a low level of fame through his continued perfect streak of winning nigh unwinnable court cases, and he becomes involved in some particularly difficult and curious cases as a result. In this chapter, Phoenix also faces off against Franziska von Karma, the prodigy of one of the antagonists of the previous game, who seeks revenge against Phoenix for perceived slights. As is the case with most Ace Attorney games, the final court case is by far the most excellent, but Justice for All takes it a step further with what is probably the single best case in the series.

Justice for All also adds a lot of features to the series that have since become hallmarks. Psyche Locks, which aid Phoenix is perceiving and breaking through the lies of others during investigations makes its debut here, and Phoenix can also use character profiles as evidence, which is a small but welcome addition. The investigations and courtroom battles have increased difficulty, including a few instances where Phoenix must get the correct answer to a puzzle on the first attempt or lose the case (and have to start from the last checkpoint). Phoenix Wright: Ace Attorney: Justice for All is almost definitely the best entry in the original Ace Attorney Trilogy, so it’s hard to find fault here.

Finally comes Phoenix Wright: Ace Attorney: Trials and Tribulations, which weaves two stories during two different periods of time into a worthy final conclusion to the trilogy. For most of the game, players once again play as Phoenix Wright, and see the events immediately following Justice for All, but players will also take on the role of Mia Fey, Phoenix’s mentor, in two cases that take place before Phoenix became a lawyer. More interesting still, Miles Edgeworth also becomes playable for a brief section of the game. The events center around a few cold cases that Mia Fey never had the chance to solve, while Phoenix battles the mysterious Prosecutor Godot in a climactic finale that wraps the series up nicely.

There aren’t very many new additions to gameplay in Trials and Tribulations, but the cases are thoroughly complex and challenging, in some cases to a fault. For example, instances in which one wrong answer can lose a trial have returned from the previous game, only now they’re so common that it’s annoying. When you lose a case, you have to start at the beginning and just click the “A” button for twenty minutes, which is maddening. Trials and Tribulations has more low points than the other two games in the trilogy, mostly just because a few of the cases are so long that they grow tiresome, but also has some of the highest highs in the series.

So what’s new in the 3DS port? If you’re comparing it to the most recent port, the iOS version, not much. Though the games are greatly improved upon from their DS or Gameboy Advance versions, they are nearly identical to the iOS version. Graphically, the games are slightly better than the iOS version, but now you can enjoy it in 3D. The 3D effects are predictably not very exciting in a game that is 98% dialogue, but it make things look a little cleaner with three different fields of depth. Some of the graphical and animation glitches that were present in most of the previous versions have also been fixed. The only other change is that the Japanese and English versions are both available in the same download, but this won’t make a difference to most people.

A lack of new additions isn’t necessarily a bad thing though, as the original versions of these games are hard to improve upon. If there is one thing that could have been added to these games it’s a better checkpoint system. This feature was added in Phoenix Wright: Ace Attorney – Dual Destinies, which makes the pain of failure during a trial much more bearable, so I don’t see why this couldn’t have been implemented in this port. Also, I know it has nothing to do with the trilogy itself, but I really would like to see Apollo Justice: Ace Attorney be included down the line as DLC. Apollo Justice: Ace Attorney is an absolute must-play for those who want to enjoy Dual Destinies to the fullest, and it’s not a game that has gotten much attention in terms of ports–I think it’s time this changed.
Phoenix Wright: Ace Attorney Trilogy withstands the test of time and is still one of the best portable experiences of all time. Fans of the series now have a definitive version of the beloved trilogy, and newcomers, like myself, have a chance to realize what they’ve been missing out on for years.

Phoenix Wright: Ace Attorney Trilogy is a complete and utter masterpiece, and not playing it should be considered a criminal offense in the gaming community.

You know that jerk online that relentlessly trash talks you after every kill? That guy was probably Travis "Tie Guy" Northup. Competitive, snarky, and constantly wearing a tie, Travis has been writing his opinions about electronic media since he was a teenager, and is pretty much the only person to hold his opinions in high regard.
Related Articles: Phoenix Wright: Ace Attorney Trilogy 3DS
Share
Tweet
Share
Submit