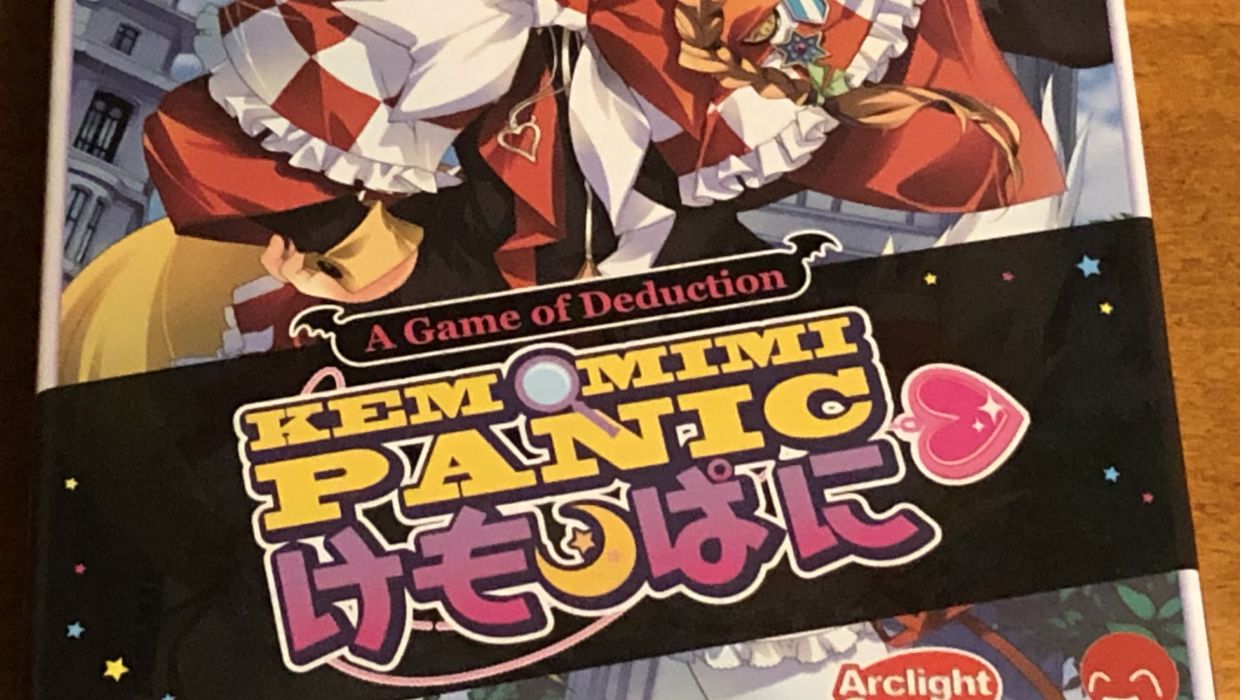 I’m not a fan of social deduction games. It might partially be due to the fact that when I first started playing them I was eliminated almost right away, which made for a boring experience. That and the fact that they seem similar to me. While some updates have been made to streamline the genre, and the settings have been changed from werewolves and mobsters, they seemed more similar than different. Going into Kemomimi Panic was going to be a challenge for me.

In Kemomimi Panic, four to eight people play as citizens of Mokemoke. A burglar is on the loose stealing women’s jewelry at night. At the beginning of the game each player gets a role card, a character card, and a decoy card. The role card indicates if the player is the thief, a citizen, or the Informant. Some of the citizen cards don’t offer any special abilities, but a few do have ones that go into effect after the character has been eliminated, like causing other players to lose their Decoy card or not allowing the thief to strike during her next opportunity.

The character card shows who each person is playing as and what special ability they have. The character information is common knowledge for everyone playing, which may affect who people suspect or who gets burgled. For instance, Detective Shamrock is a required character in each game. She can select any player at the beginning of the game to indicate if they are the thief or not. Certain characters are linked to each other and should be used together. The rulebook does include character options for the different player counts, which is nice since there are over 20 different characters.

Since we are on the subject of characters, this is published Japanime Games. Fitting with the title of the game, each of the characters is female and boasts animal ears. Also, there is a differing amount of fan service for each one. While most of the cards don’t have anything that would make your grandmother take notice (other than the previously mentioned animal ears), the art on a handful of cards will have you considering your audience or reaching for a marker to help the ladies not get a cold from the chill of their clothing choice. 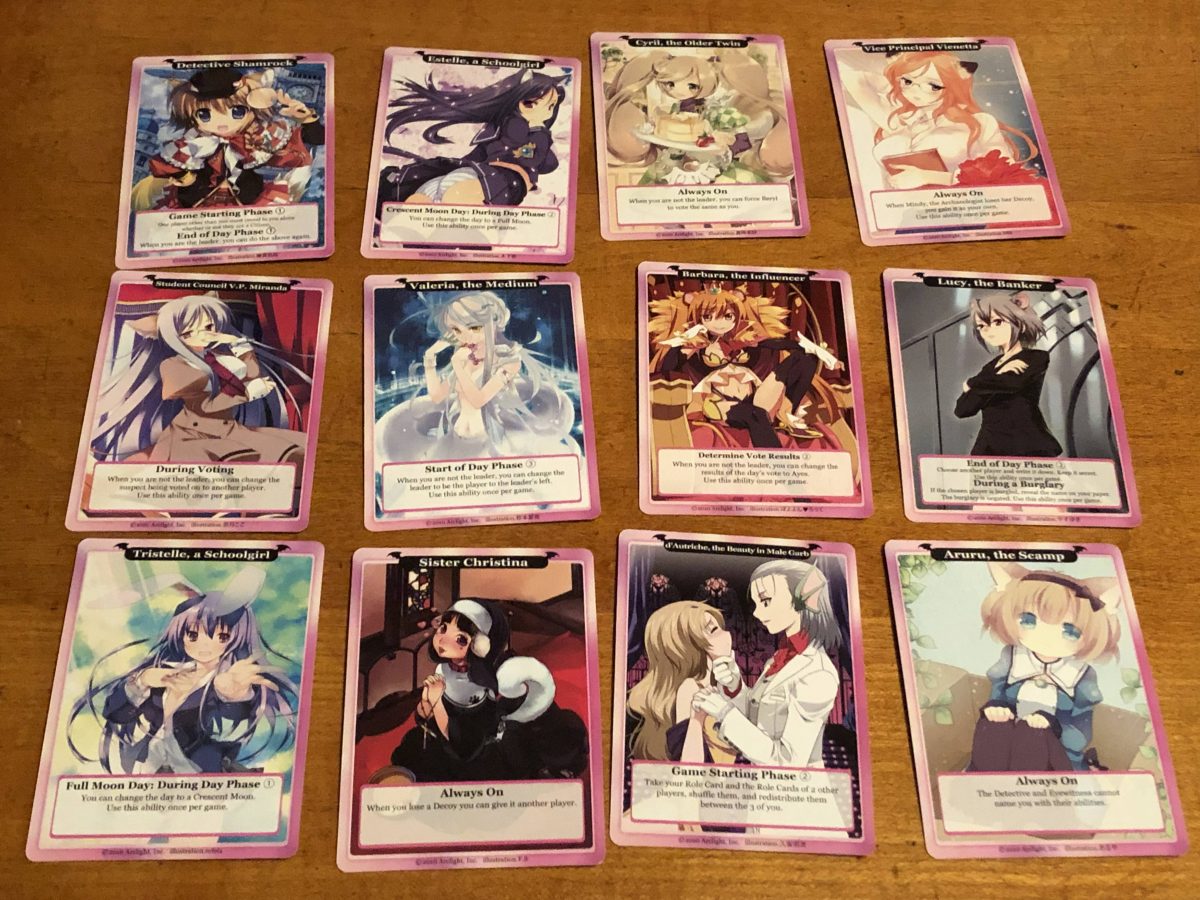 After each player has gotten their starting cards and Detective Shamrock has found the identity of one of the other players, the Moon Card is given to the player to the left of Detective Shamrock with the crescent side face up. This person becomes the leader for this round. Then the Target Card gets placed in the middle of the table and the day starts.

During the day, everyone discusses who they think the thief is. After conversing for a few minutes, the leader names a suspect and points the target card in their direction. A vote is taken and if more than half the players vote yes the suspect is confirmed. If the suspect has a decoy card, that card is taken away. Otherwise that player’s role card is revealed and the player is eliminated from the game.

If the Moon Card is showing the crescent moon side, then a burglary occurs. Everyone closes their eyes and the thief points the target card at a player. Once this has been completed everyone opens their eyes. The targeted player loses their decoy card if they have it. Otherwise their role card is shown and the player is eliminated. After being eliminated, if their character has a special ability that activates when eliminated, that happens now.

One of the things I like about Kemomimi Panic are the decoy cards. It allows everyone to stay in the game for a longer period of time. However, it also means that someone can get eliminated and then have to watch all the other players take their turns until two players are left. It’s recommended that the discussions take about three minutes before the leader decides to point the target card. 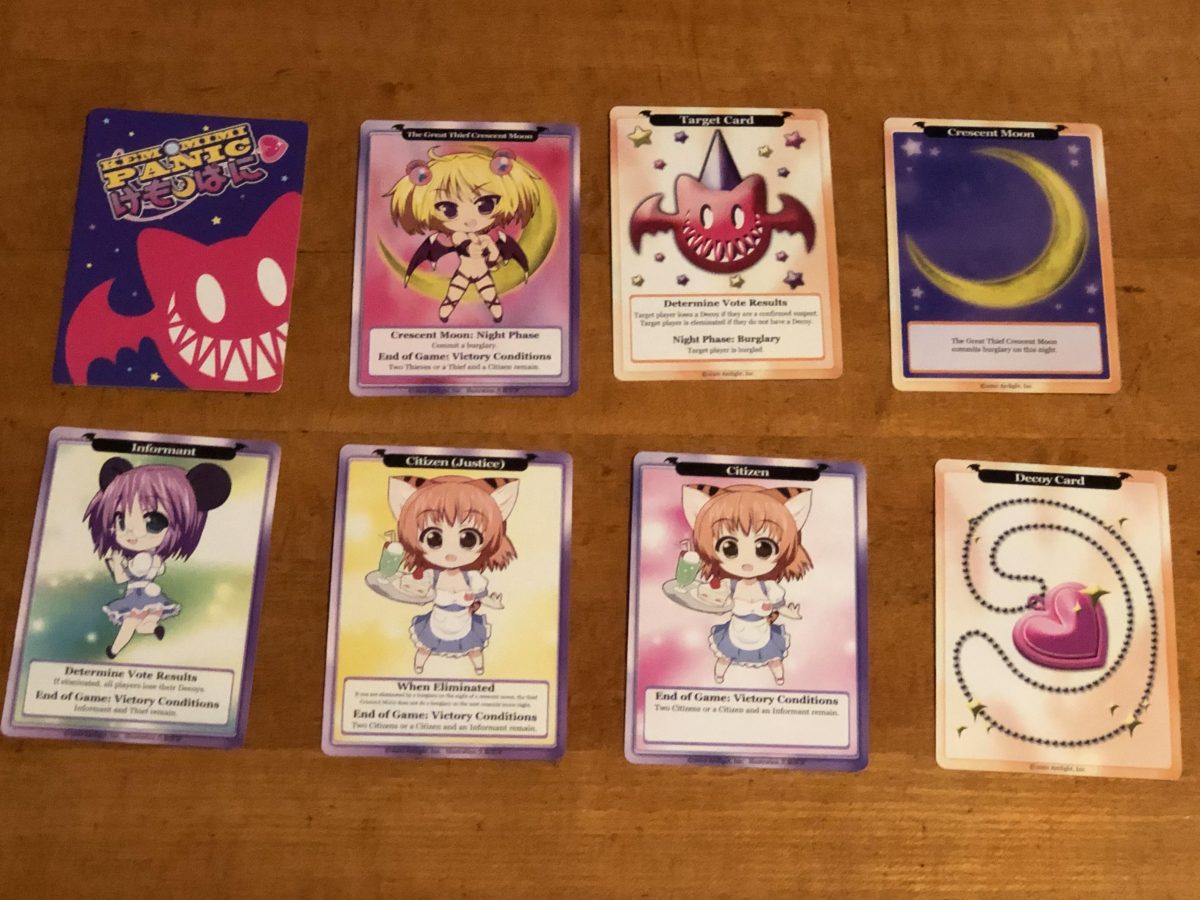 The fact that you can play Kemomimi Panic without a guide is another positive aspect. While some people may enjoy going through the motions and telling players when the bad guys should plan in games like Werewolf, having Kemomimi Panic allow everyone to play at the same time makes everyone feel included.

The rules for eight players changes slightly. Two thieves play instead of one and every round a new burglary happens. It doesn’t change the game that much, but some players may be annoyed at the variant.

Overall, I feel that Kemomimi Panic does bring some fresh concepts to the social deduction genre, and I can see fans of the genre enjoying the game. If you are looking for something different and can get past the setting and artwork, then you can find an enjoyable experience here.

While not working as a Database Administrator, Keith Schleicher has been associated with Gaming Trend since 2003. While his love of video games started with the Telestar Alpha (a pong console with four different games), he trule started playing video games when he received the ill-fated TI-99/4A. While the Speech Synthesizer seemed to be the height of gaming, eventually a 286 AT computer running at 8/12 Hz and a CGA monitor would be his outlet for a while. Eventually he’d graduate to 386, 486, Pentium, and Athlon systems, building some of those systems while doing some hardware reviews and attending Comdex. With the release of the Dreamcast that started his conversion to the console world. Since then he has acquired an NES, SNES, PS2, PS3, PSP, GBA-SP, DS, Xbox, Xbox 360, Xbox One S, Gamecube, Wii, Switch, and Oculus Quest 2. While not playing video games he enjoys bowling, reading, playing board games, listening to music, and watching movies and TV. He originally hails from Wisconsin but is now living in Michigan with his wife and sons.
Related Articles: Kemomimi Panic, Tabletop
Share
Tweet
Share
Submit