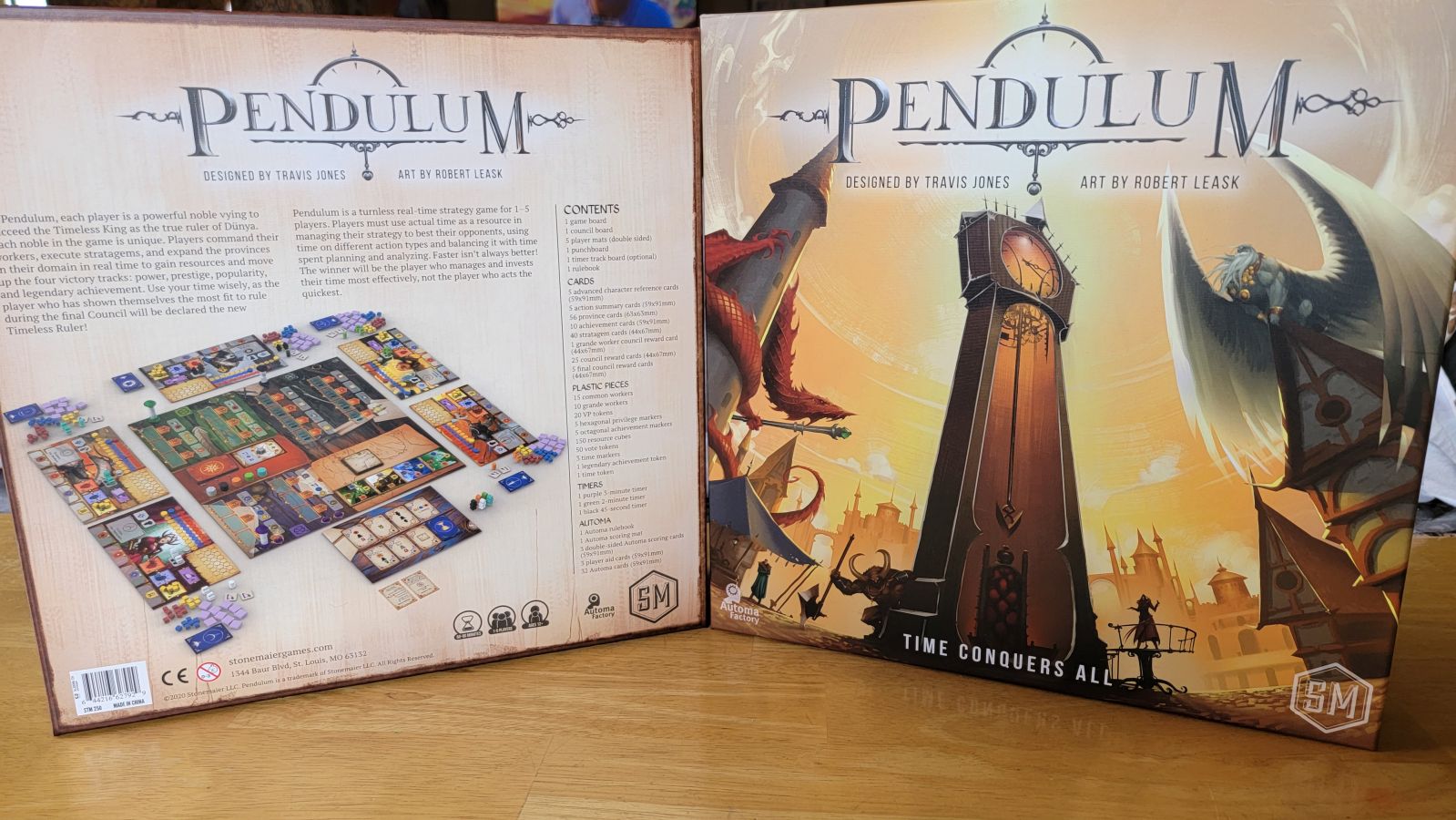 The time has come! Pendulum, by Stonemaier Games is a worker placement game that, unlike many other worker placement games, utilizes a real time component to make the game a unique experience. Designed by Travis Jones, with art by Robert Leask, Pendulum is one of the lesser talked about games produced by Stonemaier games. In Pendulum players use time as a resource in order to succeed. Not only do players utilize time as a resource, it is also used as a mechanic to either speed past your opponent, or make them stay behind like they live in a different timezone.

A game built for five players that takes about 60-90 minutes, Pendulum offers a more classic worker placement experience, as well as a real time experience which is vastly different from other worker placements of the genre. Boasting its design of using real-time, Pendulum stands out and makes getting it to the table a fun and engaging experience that many other games don’t have. Instead of having downtime between turns and relying on mechanics of passive effects and other things like that, Pendulum utilizes the real-time aspect to unlock and also advance worker actions in a unique take on worker placement. 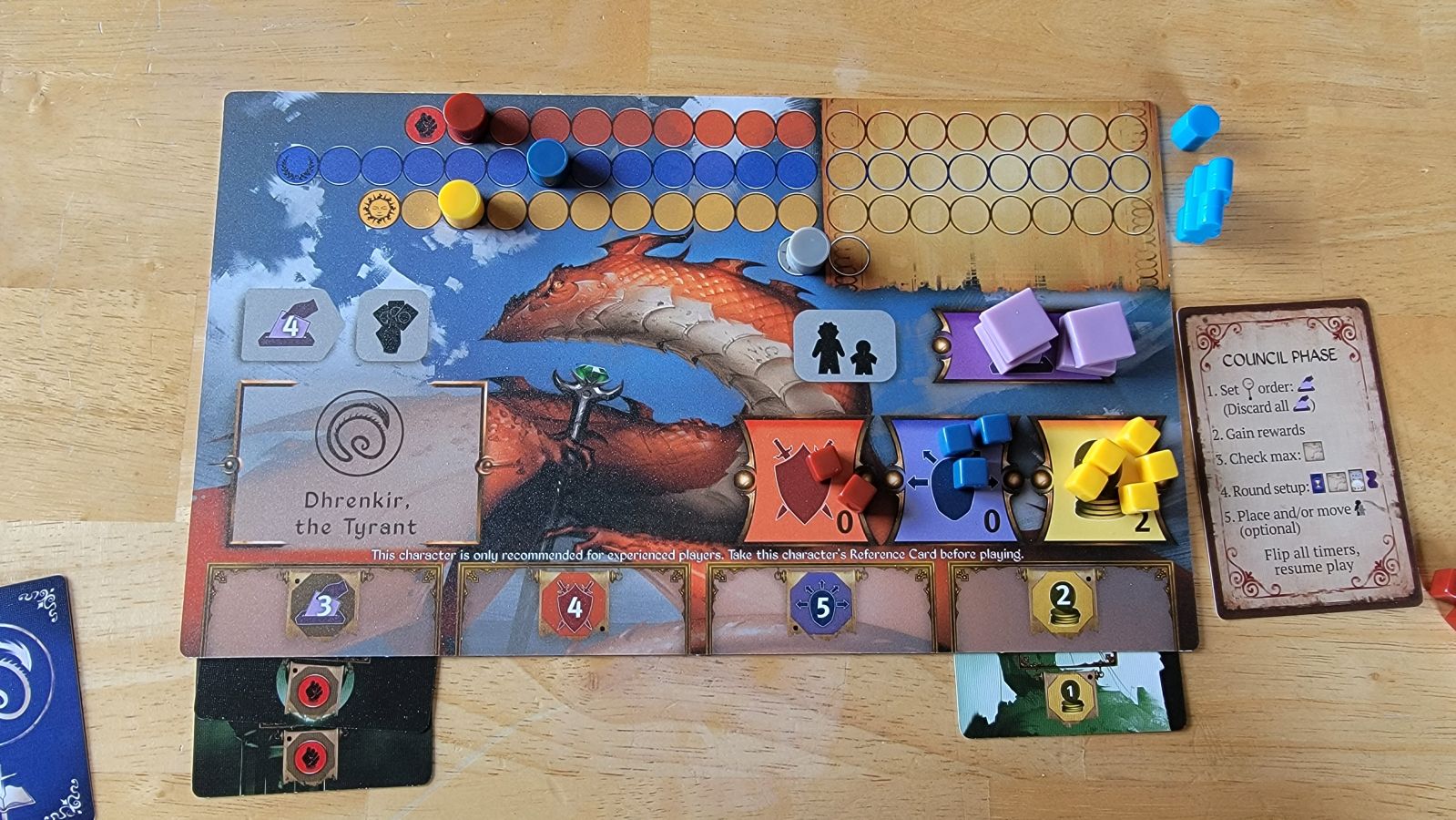 Along with the legendary achievement and the three other victory point trackers, power, prestige, and popularity, players must reach a certain level with these tracks or they will not score points much like with the legendary achievement. During a game of Pendulum players will utilize the sand timers to fuel their actions which will increase their power, prestige, popularity, and ultimately grant players their individual resources to increase those individual tracks on a player’s board. Players start out with two workers(one normal and one grande), and a hand of four cards that can be used at any time. Players also receive starting resources according to their mat, blue, yellow, and red resources. Once the game starts players have the option of playing the game in real time, or more turn-based without the real-time element. The biggest difference between the two types of play styles is that while everyone takes simultaneous actions, you can either take actions waiting for the sand timers to empty being dependent on the time of the sand timers or not using the sand timers and everyone playing simultaneously but then waiting till everyone has finished a set of actions before the next set of actions will open up. 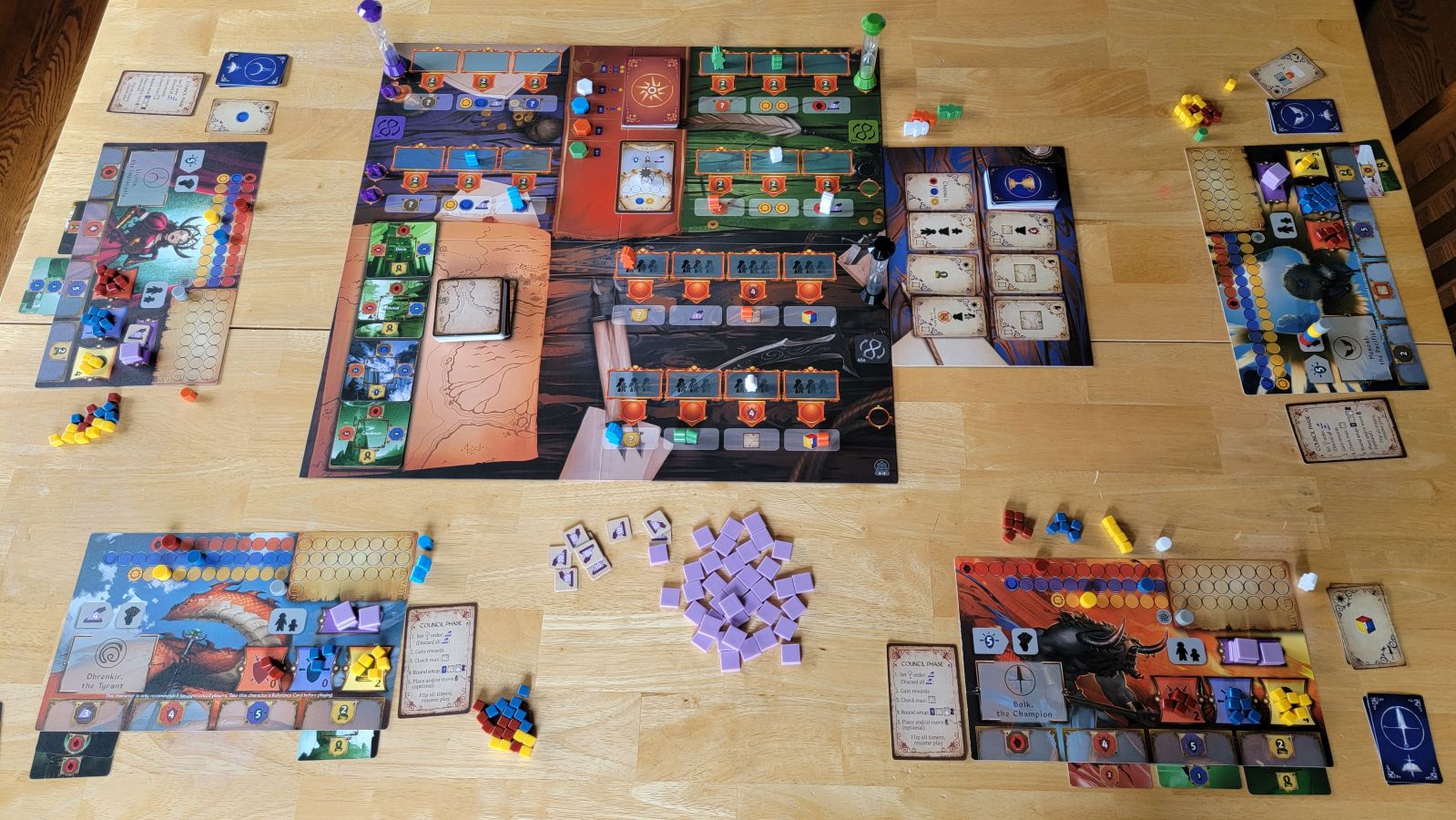 Actions in each of the three action space areas are contingent on where the sand timers are currently located. There is effectively a top and bottom to each set of actions. If the sand timer is in the bottom row, players may only queue up their workers in the available top row. Once the sand timer is out of time it flips to the top row, players move their works into the rewards space of the action and retrieve their rewards. Then, when the sand timer moves off the bottom to the top row, if players have any workers locked into the rewards space of the bottom row, they may retrieve those workers and use them for other actions on the board.

There are three groups of actions signified by different areas of the board, and different colors that utilize different sand timers. The three different sand timers (purple, green, and black) all have varying times associated with them which determine how often those actions denoted by the sand timers can be used. The black timer(45 seconds) controls the actions that are most frequently available and provide resources with no cost. The green timer (2 minutes) oversees actions that are more available but still more valuable than the black timer’s actions. The purple sand timer (3 minutes) has the fewest available actions but gives some of the more valuable rewards. All the green and purple timer actions have a cost of two money(yellow resources), however they also have the caveat of only being available for one worker, unless you use one of your grande workers. 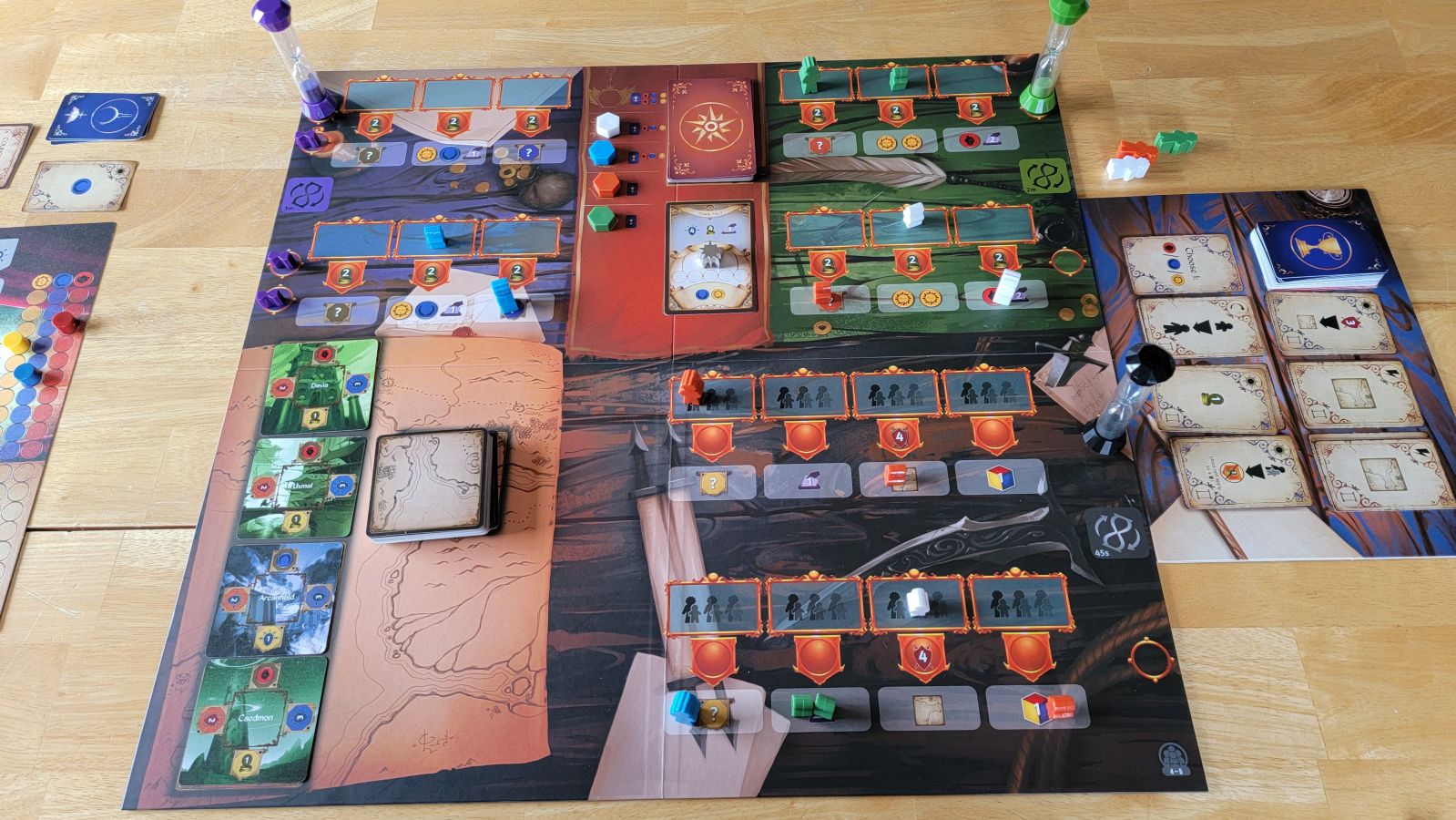 Placing a worker in one of these action spaces can vary as if you go to place at the same time as another player who gets the priority. In this situation, order is determined by the Privilege tracker, whoever has higher Privilege goes first.Privilege also allows players to advance a track on their board if they are third or higher on the privilege track. Players also draw cards to either take immediate rewards, or give them an extra action anytime they have cards in their hand. Privilege is determined by the amount of votes a player has at the end of each round. The most votes grants you the most privilege which nets you two advancements on a tracker of your choice and a card for either your hand or an immediate reward, or an opportunity to upgrade a small worker into your second grande worker.

The end of a round occurs once all the purple tokens on the purple timer’s spaces have been removed, each coming off every time the timer flips. Once the round ends the council phase begins where players determine privilege and get extra cards, and reset for the next round. Players go through this cycle of actions and timers followed by a council phase for four rounds total. After the fourth round the player(s) that have moved all of their tracks into what looks like a piece of parchment on their boards(i.e. Advancing the tracks far enough) score points based on how far their trackers have progressed into the parchment area of their tracks. Once final scores are determined then the player with the most points wins, and if there is a tie then the player with the highest privilege is the winner. 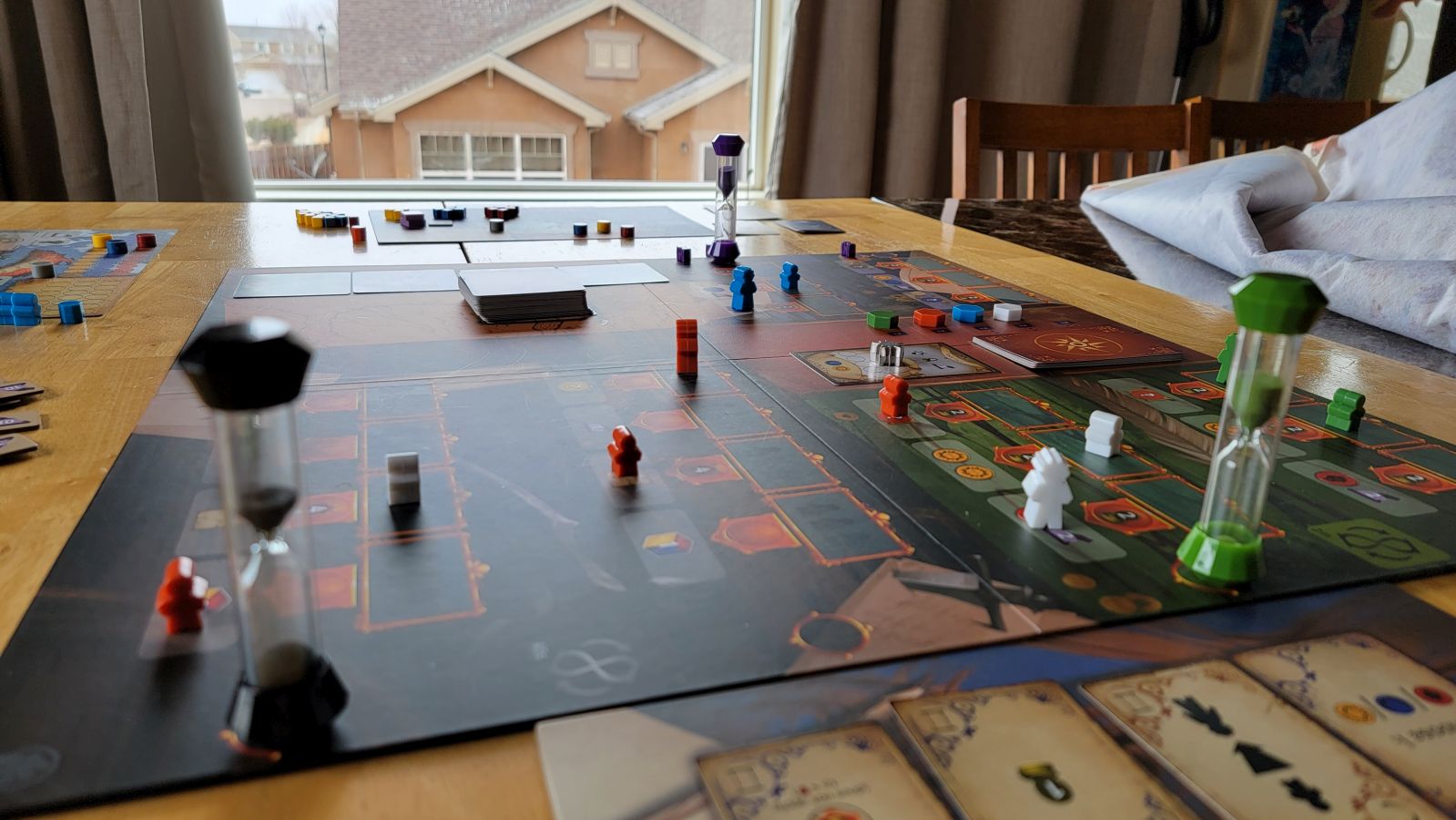 As another Stonemaier game, quality and gameplay for me are what I’m looking for when opening the box. As soon as I opened my Pendulum box I was ecstatic for the components and to play. With vibrant colors, and solid components, and an excellent fantasy kind of aesthetic Pendulum is a game I can see myself playing quite a few times. The added bonus of it being one of the only real-time games that I own, was very exciting. With a couple of plays under my belt, and many Stonemaier fans among my friends, Pendulum is a welcome addition to my collection and makes me want to play more from them as they publish more games.

Pendulum, from what I have encountered, has gotten a bit of a bad rap. This in my opinion is mostly in part to players having played the game in a turn-based fashion rather than playing real-time. My experience is that while the real time part of the game is both stressful, and hectic, it is without a doubt where the game shines the most. It is this interaction with the sand timers and other players in such a hectic environment that make the game stand out and fun and fascinating.

Having played both turn-based and real-time, the latter was definitely the favorite and pendulum should honestly always be played this way. Without playing it this way, Pendulum suffers from analysis paralysis, waiting on ALL players to determine whether or not you can move to the next set of actions, and grants players so much time to strategize that the beauty of the game is lost in translation.Overall Pendulum is a game that I have enjoyed and I recommend to anyone who is remotely interested in a real time game.