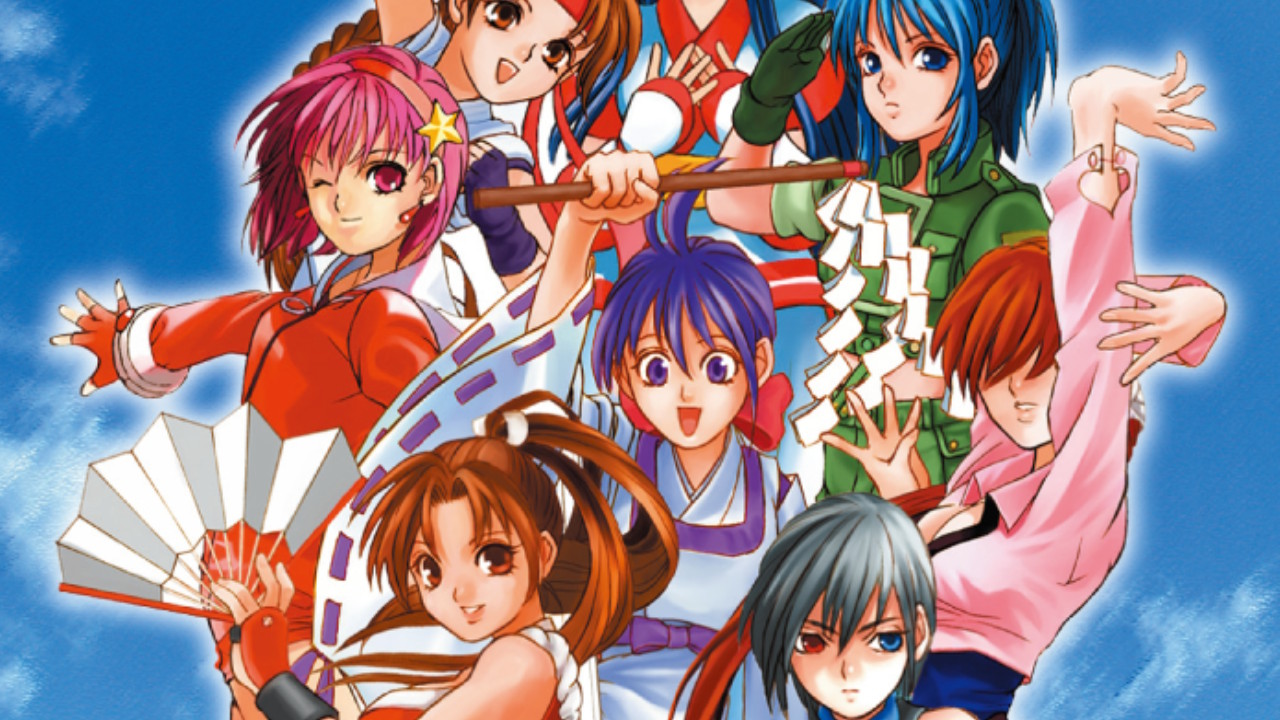 Originally released in 2000 for the Neo Geo Pocket, SNK Gals’ Fighters is a compilation fighting game featuring an (almost) all female cast competing in the Queen of Fighters tournament. The victor of the tournament will receive a talisman that, supposedly, can grant a single wish. It’s a competent enough fighting game, but is it still worth playing 20 years later?

There’s not much story beyond that, which is fine for a fan-service focused game on a portable console. The main single player mode, called Q.O.F., is essentially an arcade mode where you work your way up to fighting the big bad, Miss X, with characters saying a line of dialogue between matches. The pixel art of the girls when speaking, and of the game as a whole, looks nice and colorful. The game goes for a chibi art style which looks great when fighting; each character has only three colors to their sprite, but they go a long way towards making them stand out. This port of the game also includes several backgrounds, all of which are different colors of the Neo Geo Pocket, a high quality scan of the manual, a filter to recreate the dot-matrix display, and allows you to zoom in on the tiny screen as well as rewind the game at any time. 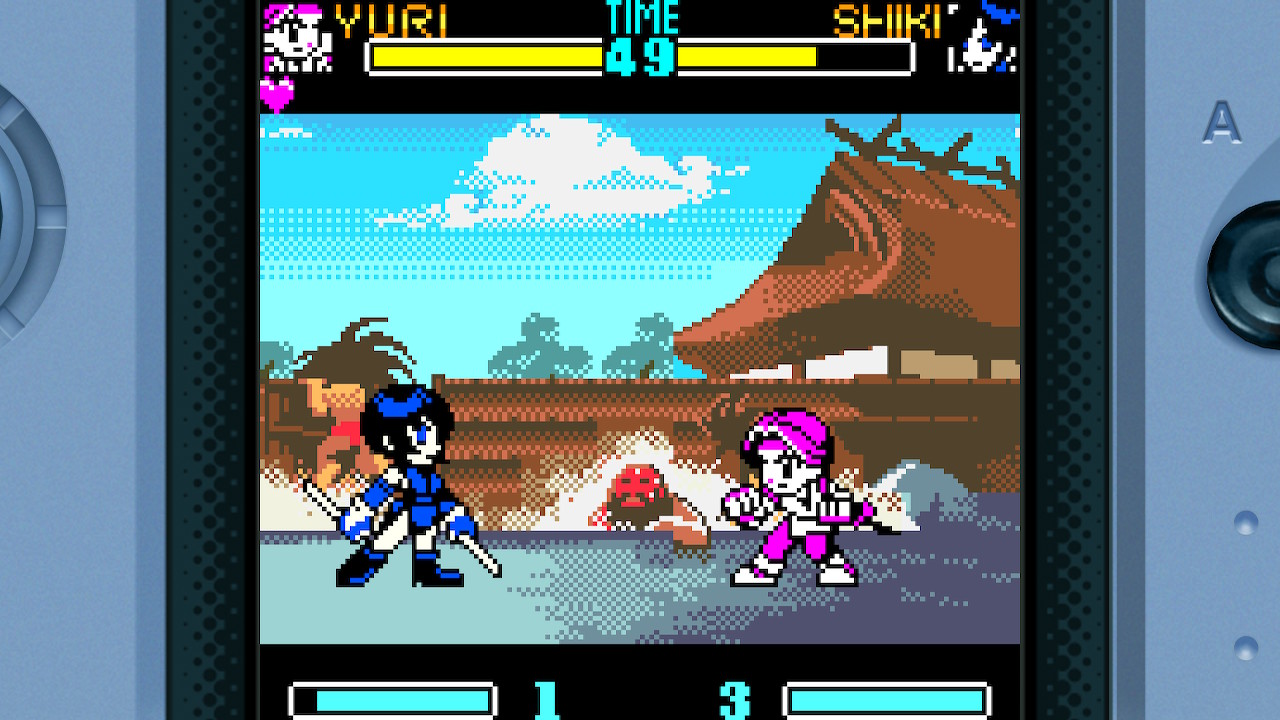 Gals’ Fighters surprised me by including two other modes that I thought would be cut from or not work in this portable re-release: two player versus and training. While playing in TV mode, two-player mode works exactly the same way it would in any other fighting game, while in portable mode you turn the Switch vertically and each player controls their separate Neo Geo Pocket screens using the attached joycon. It’s a novel set up and interesting for the first few seconds, but it makes the “screen” extremely small and it’s uncomfortable for both parties. Training mode is about what you would expect, it allows you to train with a CPU either attacking you or just standing there. You can also adjust the skill level of CPU fighters in the options menu.

The combat itself is also what you would expect from a portable fighting game released in the year 2000: In short, it’s not great. To elaborate, it feels extremely stiff and difficult to perform even the most basic of combos. On top of this, some character’s moves require you to execute very complicated movements that just don’t seem to register most of the time. Mechanics like throws or the weird, cartoonish dust cloud clashes aren’t explained at all as far as I could see, so I ended up just mashing buttons and abusing the rewind. The game only uses two buttons, A for punches and B for kicks, so some sort of shortcut for the more complex actions would have been nice. 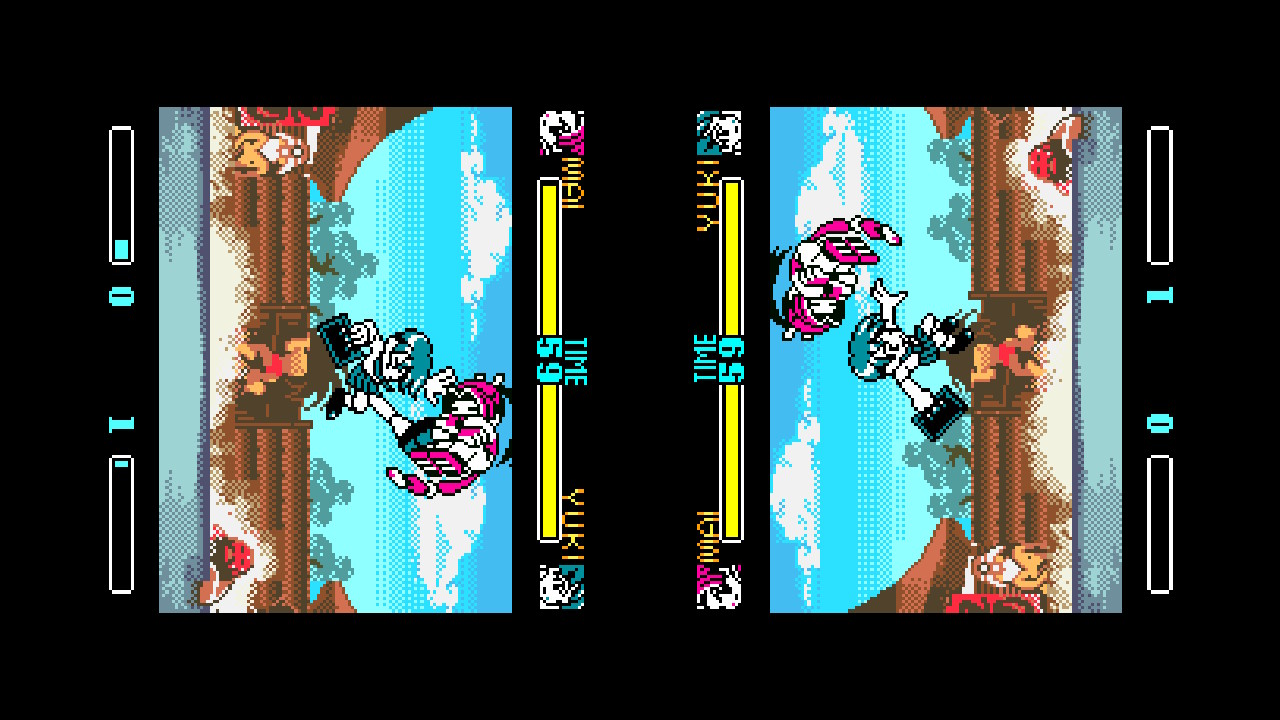 While I appreciate this port, at least for the sake of game preservation, I don’t think it’s really worth playing unless you’re nostalgic for it. There are much better fighting games on the Switch that have a lot more depth. The controls aren’t the only thing that have aged poorly here either, the humor of the Queen of Fighters campaign is extremely outdated with every joke being either sexist or transphobic. Most of the girls’ stories end with them wishing for something extremely stupid like their long hair back, wishing for a husband or boyfriend, or dropping the medallion and wishing for it back offhanded. The main villain, Miss X, is actually Iori Yagami crossdressing, and the way the characters point out who he is is… problematic. To clarify, I don’t have a problem with a character crossdressing to get into a tournament inherently transphobic, but every single character seeing through his disguise by pointing out how he can’t be a woman because his frame is too manly or his voice is too deep is transphobic, and it’s overall just not a very funny joke.

SNK Gals’ Fighters is a reminder of why fighting games didn’t really work on portable consoles back in the day. While the additions to this port are nice and the game looks good, the game itself feels unresponsive and the controls are too complex for its own good.

David is the kind of person to wear his heart on his sleeve. He can find positives in anything, like this is a person who loved Star Fox Zero to death. You’ll see him playing all kinds of games: AAAs, Indies, game jam games, games of all genres, and writing about them! Here. On this website. When not writing or playing games, you can find David making music, games, or enjoying a good book. David’s favorite games include NieR: Automata, Mother 3, and Gravity Rush.
Related Articles: SNK Gals' Fighters
Share
Tweet
Share
Submit