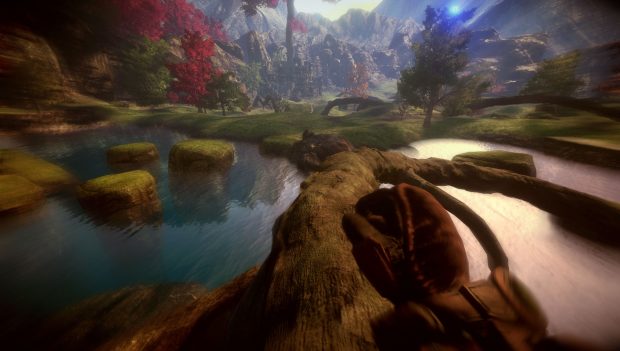 The first 15 minutes of Valley are some of the most confusing moments I’ve ever experienced in a game. You find yourself waking up on an excluded island, discover strange ghostly life forms,  find an exo suit that gives you super speed, ultra-high leaping abilities, and the ability to take and give life. Valley wastes no time pulling you into its world, and giving you tools that make you feel godlike. Unfortunately, most of the excitement is pulled away from you just as quickly, as the game becomes inundated with repetition, a bare-bones story, and technical issues that pump the brakes on an otherwise enjoyable experience.

Valley is about a stretch of the world filled with magic and mysticism, long forgotten until the player rediscovers it. Armed with an exo-suit that has all kinds of crazy abilities, you task yourself with uncovering the mysterious past of this abandoned paradise. The premise is intriguing, and pulls you in immediately, but that’s where it all starts to go wrong. As it turns out, the island’s secret is a rather uninteresting, and predictable drama regarding a secret testing facility that was located there during World War II.

While the narrative itself is boring, the real issue is the player has no stake in any of the events, which happened long ago. You merely wander the island, and learn about the events of the past long after they held any relevance. Worse still, the only urgency injected into the plot happens about 75% of the way through the game when you accidentally cause a narrative conflict to arise by mistake.

Although the story of Valley is a weak spot, the world in which the story unfolds is probably its biggest strength. The island is absolutely beautiful, and filled with massive vistas and mechanics that make you feel like part of the world. You get to run down mountainsides, jump over lakes, interact with wildlife, and take in its sights. Some of the best moments in the game are where you’re just exploring wide-open locations, goofing off, and jumping around from place-to-place.

My favorite element of the game is the mechanic of quantum immortality, wherein you can be revived after death by stealing life from the island around you, but by doing so the island begins to die. The more you die, the more the trees rot, and animals can be found lying dead more and more often. In order to restore life to the island, the player must sacrifice energy that is used to power all of the player’s ability and health, and give life to that which has died. Seeing a dead tree sprout leaves instantaneously, or a deer slowly rise from the ground, and trot off is it’s own reward, but also means that the player will have more life to draw on in case of future deaths. That said, it’s really scary to have so much responsibility depend on you playing well. There were many occasions where I’d fall off a cliff and shout “No! I just killed a whole family of deer!”

Valley is a first-person platformer, and for the most part, it succeeds at being competent in this regard. You continually unlock new powers, and must put them to good use to get through each area. The grappling hook can launch you in the air, special boots allow you to run on water for short periods of time, and magnetic gloves allow you to crawl on certain surfaces, all of which add to the complexity of the game’s platforming sections. The game stumbles, however, in keeping the pace of the platforming consistent, as you can only sustain momentum while running downhill. Anytime you need to go up a hill, or stop for a moment to grab a collectible, you lose all of your momentum, and the game awkwardly halts to a snail’s pace. And it is excruciatingly boring. It’s mind-boggling that Valley relies so heavily on gathering momentum, but then provides ample segments where that momentum is taken away, and you’re left waddling up a hillside for several minutes.

Whereas platforming has its strengths and weaknesses, combat in Valley is a lot uglier. Combat centers around shooting energy at glowing enemies that float through the air, and…actually, no that’s it. At the beginning of the game, the floating enemies are bugs, later in the game the bugs are replaced with little monsters, but they have no mechanical differences. Near the end of the game, you even fight a boss that uses the exact same skin as all the other enemies, with only slightly altered AI behavior. Combat sections appear regularly throughout Valley, although they’re less common than platforming sections, but it doesn’t make getting through combat sections any less aggravating.

Valley also features various technical issues, primarily in regards to the framerate. In certain sections where you pick up lots of speed and jump across huge areas, the game completely freezes up for seconds at a time, and becomes generally choppy. It’s almost as if Valley allows you to move faster than the game is capable of letting you move, and the software becomes extremely confused as to where you are. Unfortunately, these hiccups are fairly frequent, which dampens some of Valley’s best sections of gameplay.

The first few minutes of Valley show a lot of potential, but it quickly falls short, and gives way to repetition, a bad narrative, and some downright disappointing game design. Lasting only 3-4 hours, $20 is a steep price for an experience that leaves you bored and frustrated as often as it proves to be an enjoyable experience.

You know that jerk online that relentlessly trash talks you after every kill? That guy was probably Travis "Tie Guy" Northup. Competitive, snarky, and constantly wearing a tie, Travis has been writing his opinions about electronic media since he was a teenager, and is pretty much the only person to hold his opinions in high regard.
Related Articles: Valley
Share
Tweet
Share
Submit