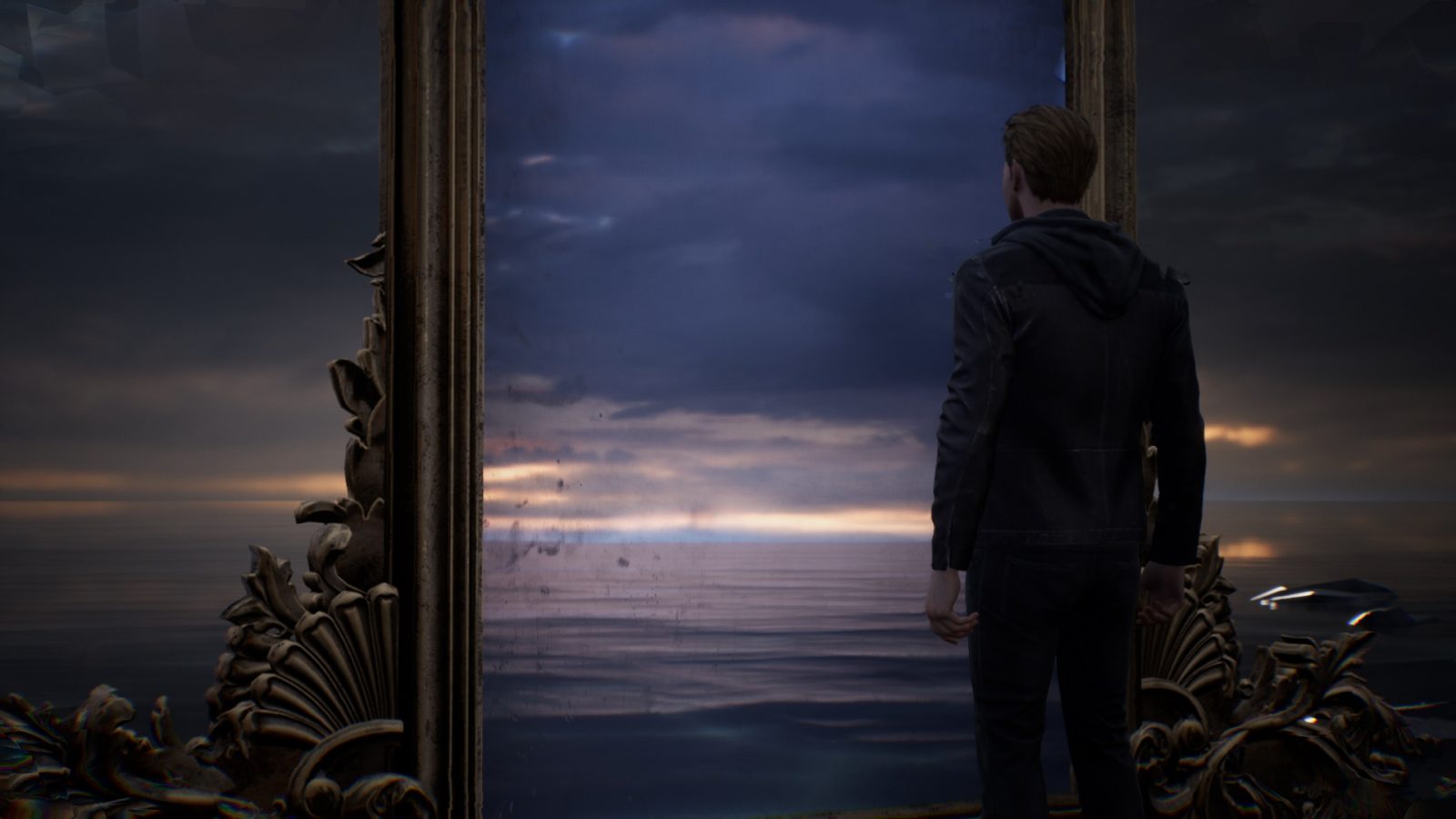 The world is a scary place, so we find coping mechanisms to help us through every day. While some may turn to drinking or drugs, Sam has an imaginary friend. This alter ego, along with the ability to visualize events and memories in his Mind Palace, helps him externalize his thoughts. After a night getting blackout drunk at his best friend’s wake and discovering his shirt is covered in blood, he’ll need to utilize his alter ego and the Mind Palace to the fullest to discover who was murdered, why, and if he killed them.

In Twin Mirror, you play as Sam; a former journalist for the local newspaper who left town two years ago after publishing an article that got the town’s mine shut down. Naturally everyone blames the loss of their jobs on Sam, so the whole of Basswood hates his guts, and having a possible murder on his conscience would be a bad look, to say the least. His investigation will lead him all over town as he discovers an even greater conspiracy than simple murder, and his alter ego (simply refered to as “Him”) will give him advice and alternate perspectives along the way. While his other personality can help with social situations and big choices, the Mind Palace allows Sam to accurately recreate past events or construct delicate plans in his head. These are an interesting twist on Dontnod’s tried and true adventure game formula, but the game doesn’t give them the time they need to shine.

Initially, Twin Mirror seems like it will be a slow burn, introducing all the characters and their quirks at the wake. Once Sam finds the dead body, however, the game goes into overdrive hurrying you from place to place with clues feeling glossed over as the narrative largely focuses on Sam’s inner turmoil and the dynamic between him, his alter ego, and his ex-girlfriend Anna. These interactions are still very interesting, and have various choices attached to them, but likewise feel rushed. No single character or plot point is given enough time to really develop, so as the game approached its denouement I was more so struck with a feeling of “oh, we’re already at the end” rather than anticipating the conclusion. Twin Mirror is fairly lengthy for a game of its genre, at around five and a half hours for a single playthrough, but it doesn’t use that time wisely. Really, I felt like it could have been even shorter with some of the tedious Mind Palace puzzles when Sam is panicking cut with no repercussions to my enjoyment of the game. While the game isn’t episodic, it feels like playing through an abridged version of the game that is. What’s here is still interesting and worth at least one playthrough, but overall is unfocused and both too long and too short.

If you’ve played any of Dontnod’s previous adventure games such as Life is Strange and its two sequels you know exactly what to expect here. You explore an environment, interact and examine objects wherein, make choices which may or may not matter later in a cutscene, then repeat in the next scene. While the alter ego and Mind Palace are interesting additions to the formula they don’t change things up as much as they could have since both are very contextual. You can only choose to ask for His advice in certain situations and the Mind Palace is only available in very specific circumstances. When compared to Max’s time manipulation or Daniel’s telekinesis these are very underwhelming features that, like the story, could have used some more fleshing out. The game does take full advantage of Sam’s analytical nature though, interactables you look out are instantly described without the need to press a button. This puts you in his headspace very well and instantly develops a connection with the player, it’s easy to understand why Sam makes the choices he does, even if you’re the one deciding for him. 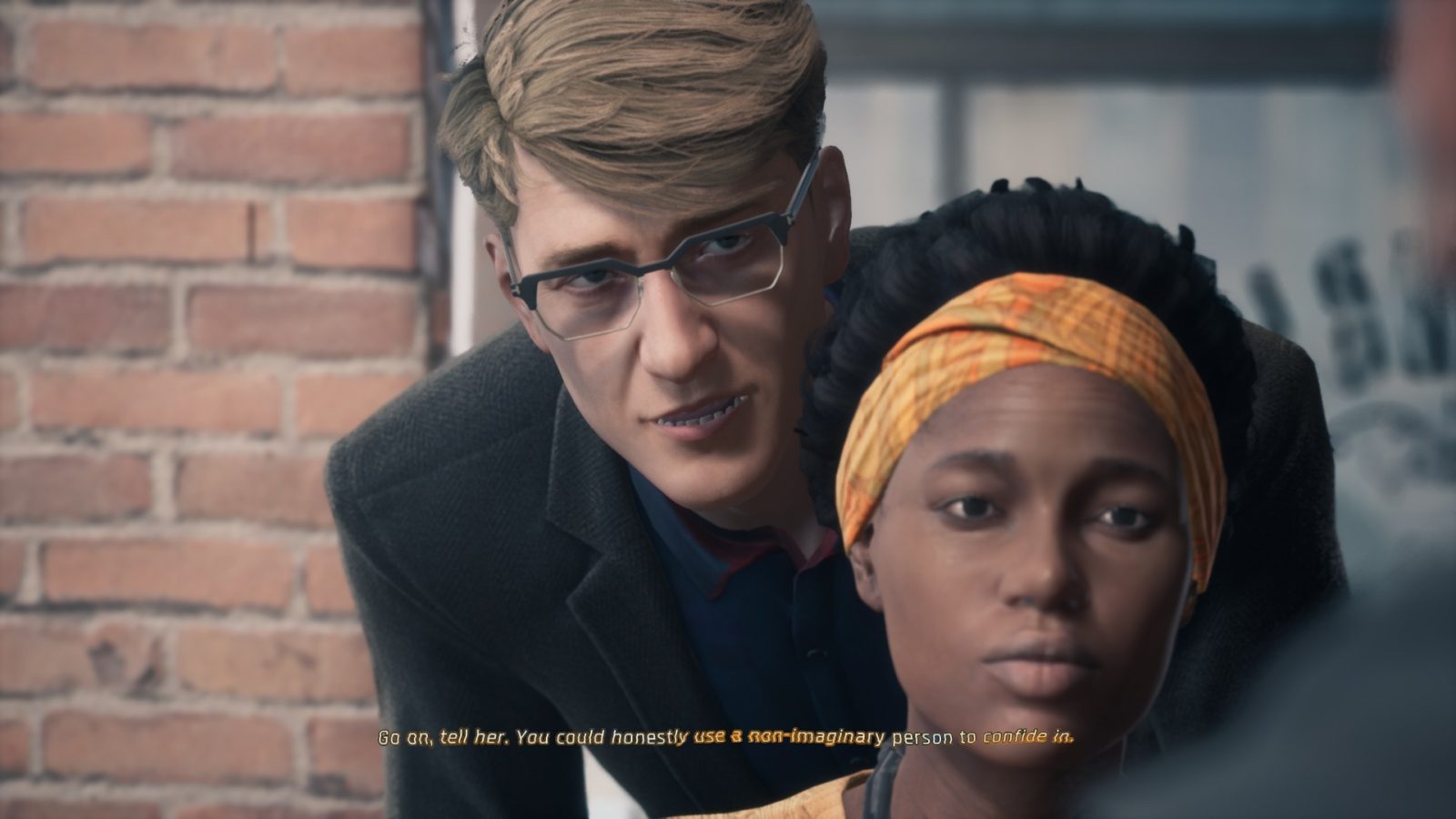 The visuals and acting quality follow the same path. The lighting, texture work, and acting are all great but the animation and writing bring them down. While some environments, such as the Mind Palace sections, look stunning they are populated by characters with stiff, uncanny animations (particularly the lip flaps, when they feel like happening). The worst written character is unfortunately also the most interesting in concept, Sam’s goddaughter Joan. I found her part of the plot the most engaging as she asks you to investigate if her father’s death was really an accident while she has a falling out with her mother and tries to run away from home. Sam’s dynamic with her is likewise fascinating since she’s the only person he really opens up to and can speak with plainly, unfortunately she’s written like a 40 year old when she’s really around 12. I get that child characters are difficult to write as both convincing and likable, but scenes with her feel a little awkward with her verbose nature and the game’s tendency to tell not show.

While Twin Mirror is Dontnod’s worst game so far, it’s still a somewhat enjoyable experience, especially for fans of their work. It’s a game that feels like it needs a redo, because while it presents interesting concepts, it doesn’t flesh out any of them.

David is the kind of person to wear his heart on his sleeve. He can find positives in anything, like this is a person who loved Star Fox Zero to death. You’ll see him playing all kinds of games: AAAs, Indies, game jam games, games of all genres, and writing about them! Here. On this website. When not writing or playing games, you can find David making music, games, or enjoying a good book. David’s favorite games include NieR: Automata, Mother 3, and Gravity Rush.
Related Articles: Indies, Twin Mirror
Share
Tweet
Share
Submit