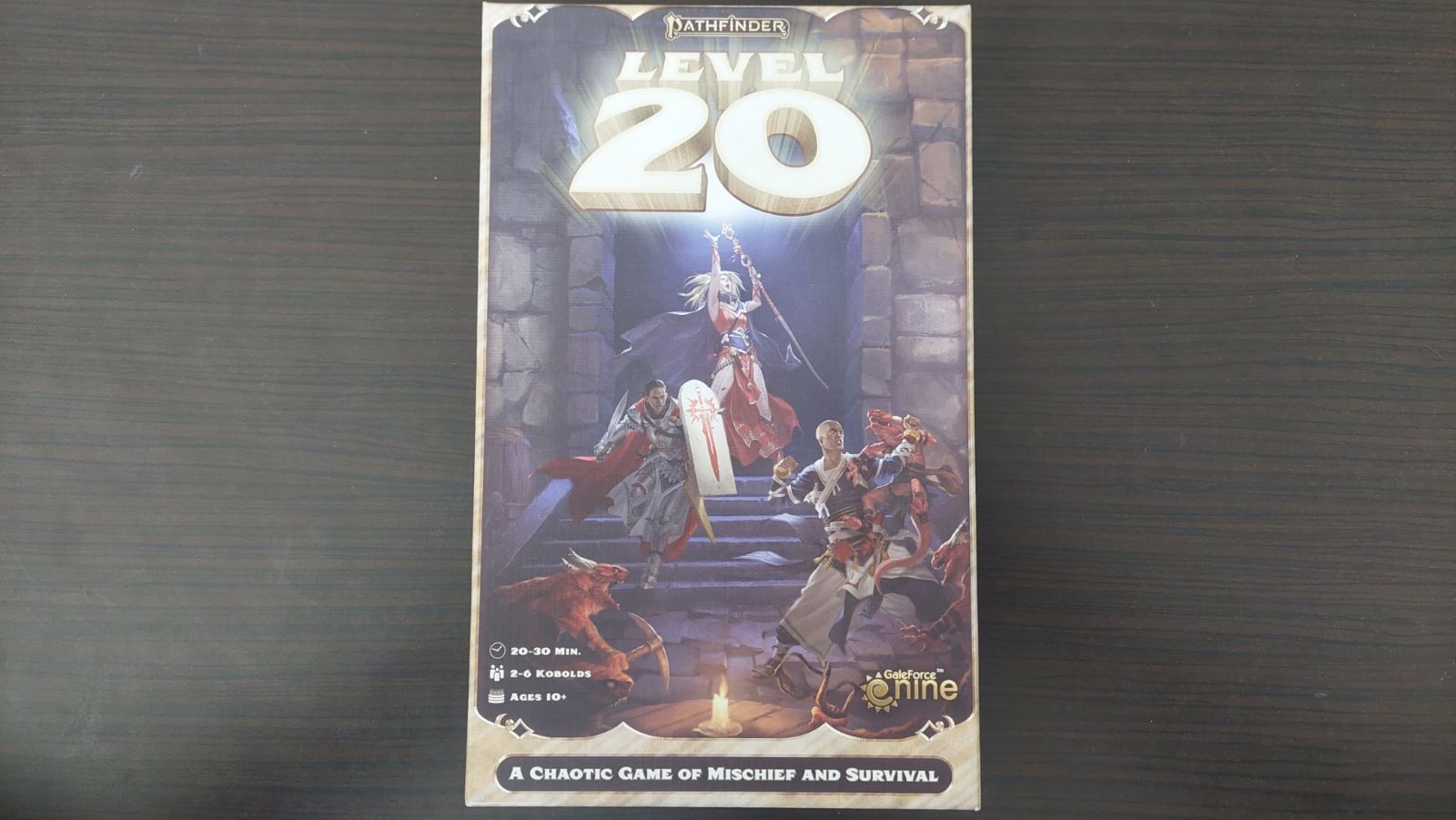 Ever heard of Tucker’s kobolds? You should. They’re one of the greatest legends in all of tabletop gaming. Back in the 80’s, a DM named Tucker jollied in tormenting his players with mere kobolds. His little kobolds, each with 1-4 hp, would set traps, shoot crossbows from sniper holes, construct networks of tiny escape tunnels, and much more. Through sheer cunning and preparation, his kobolds posed a serious threat to entire parties of 6th-12th level players and instilled more fear than demons. The full story is hilarious and I highly recommend you check it out.

The reason I’m mentioning Tucker’s kobolds is because the game of the hour draws much inspiration from them. Pathfinder: Level 20 envisions 2-6 players as little kobolds in their dungeon, defending themselves against one to two level 19 fighters who only need a few xp to reach level 20. Of course, kobolds have no chance at injuring, let alone defeating, a level 19 fighter, but they can damage their pride. 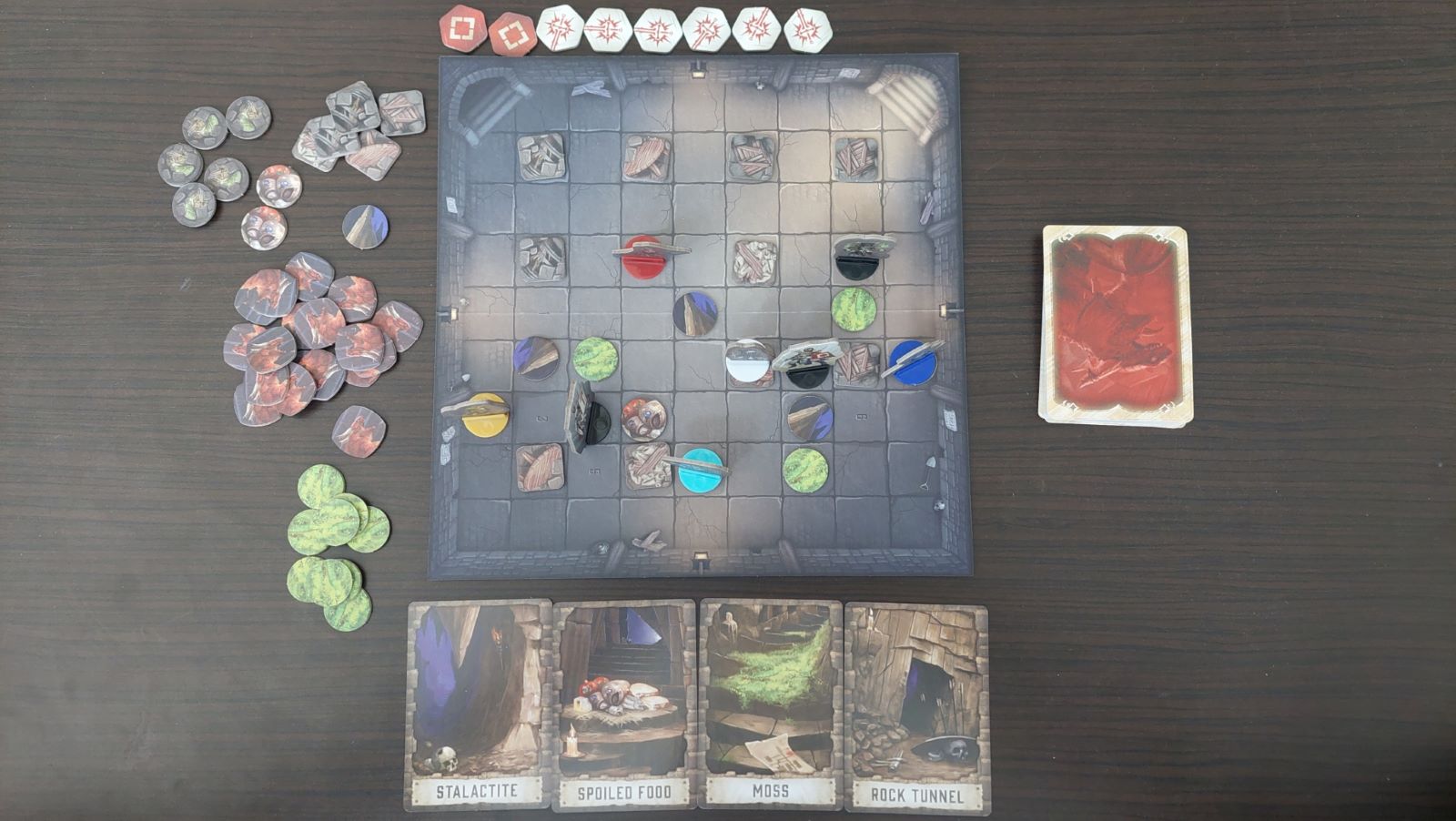 Pathfinder: Level 20 bounces between two phases until either the fighters run away in shame or all the kobolds are slain. First, the kobolds scamper around, rummage through junk, hide, or lay traps, then the fighter(s) move towards the closest kobold in sight and immediately slay any kobold upon entering their space on the board. 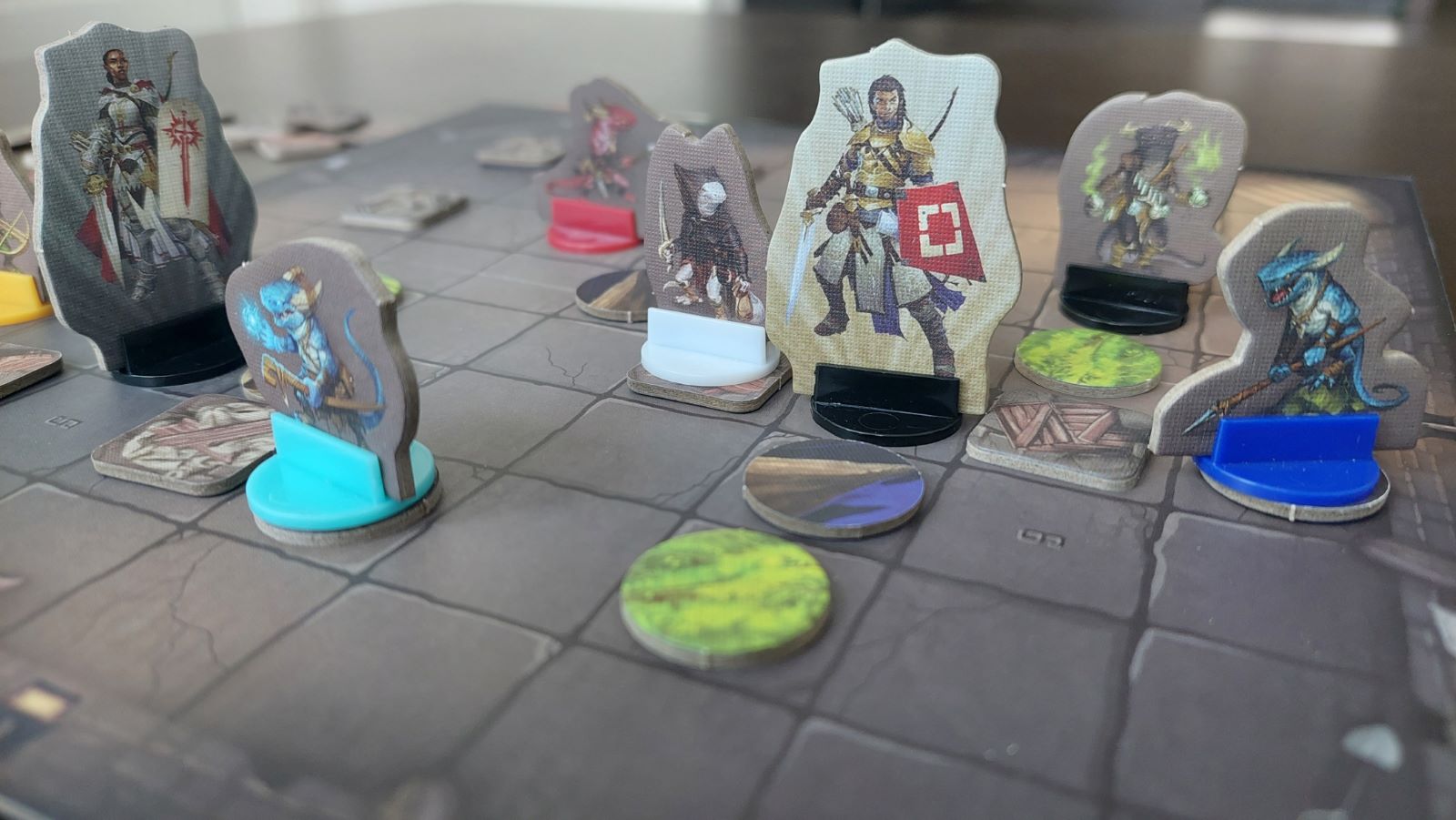 As for the kobold treasures, there are four different kinds: stalactite, spoiled food, moss, and rock tunnel. With the exception of rock tunnel, all treasures place tokens on the board. Stalactites drop a stalactite token onto a kobold’s adjacent space. Upon landing on a fighter, they lose one pride point and skip their next turn. Otherwise, the stalactite sticks around and provides cover for the kobolds. Spoiled food drops onto the kobold’s current space and when fighters enter this space they end their turn and lose one pride. They also start their next turn with two less movement points. Moss also drops onto a kobold’s current space and when a fighter enters that space they immediately slide two spaces forward in the same direction. If a fighter slams into a wall or stalactite during this slide they lose one pride point. Yes, moss slides can chain into more moss slides. Lastly, the rock tunnel cards allow kobolds to escape when a fighter enters their space. 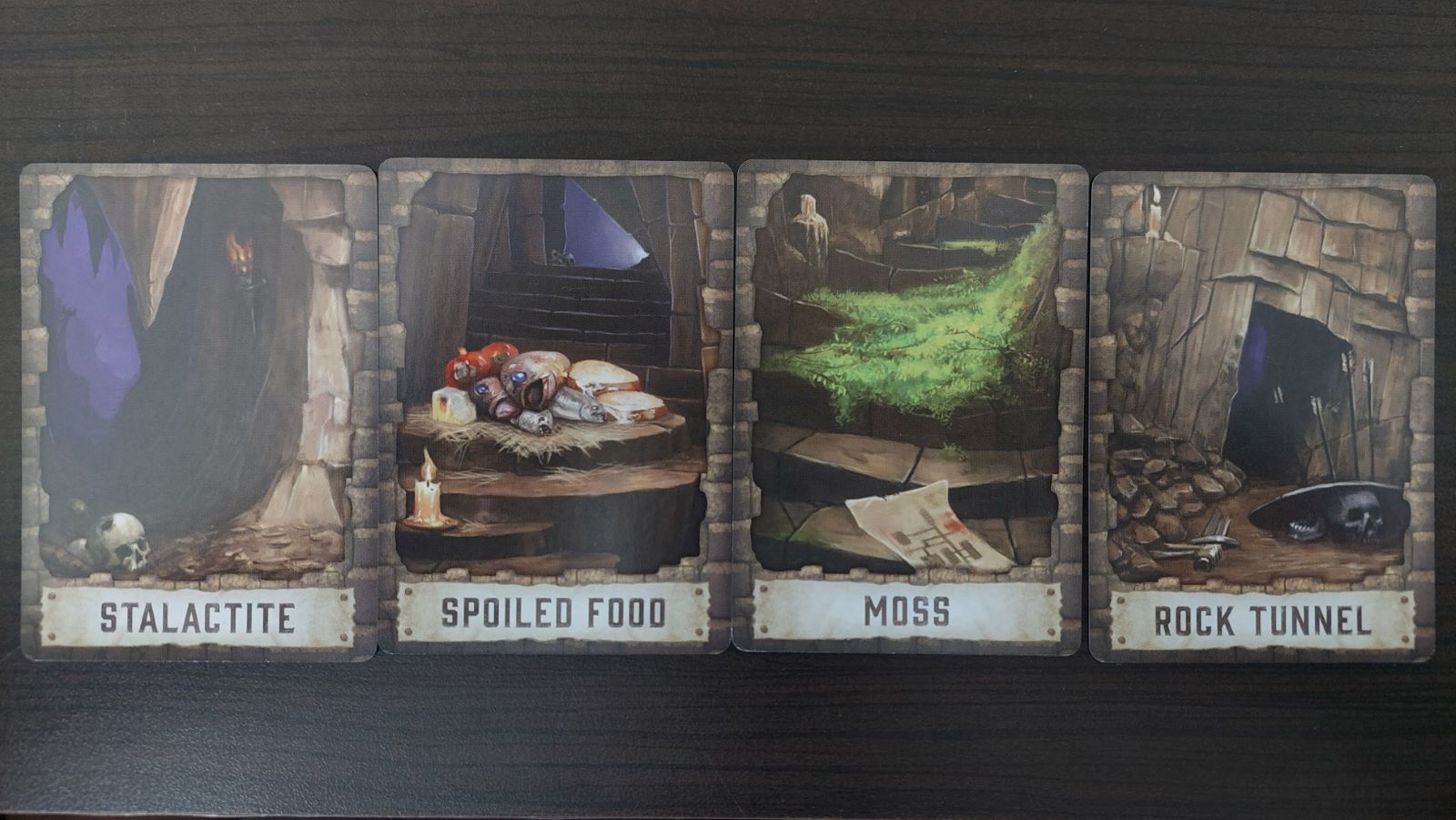 After all the kobolds take their turns, the fighters activate and move. They are not controlled by players and follow fairly simple move rules. Each fighter has four movement points a turn and targets the closest visible kobold. They must spend one movement point to turn 90 degrees and can only move forward or diagonally forward. If a fighter can not see any kobold within their front 180 degrees, they spend two movement points to flip around and check again. If they still cannot see any kobold, they move forward two spaces.

As I’m sure you can tell by now, Pathfinder Level 20 is not a serious game. It’s a short, light-weight goofy good time. The concept alone provides so much humor and the game’s mechanics facilitate it pretty well. Imagining a fighter face-planting a wall thanks to your moss trap is just hilarious! Board games don’t always have to be about competition, deception, strategy, or negotiation, sometimes they can just be about having fun and Pathfinder Level 20 does a pretty dang good job of that. 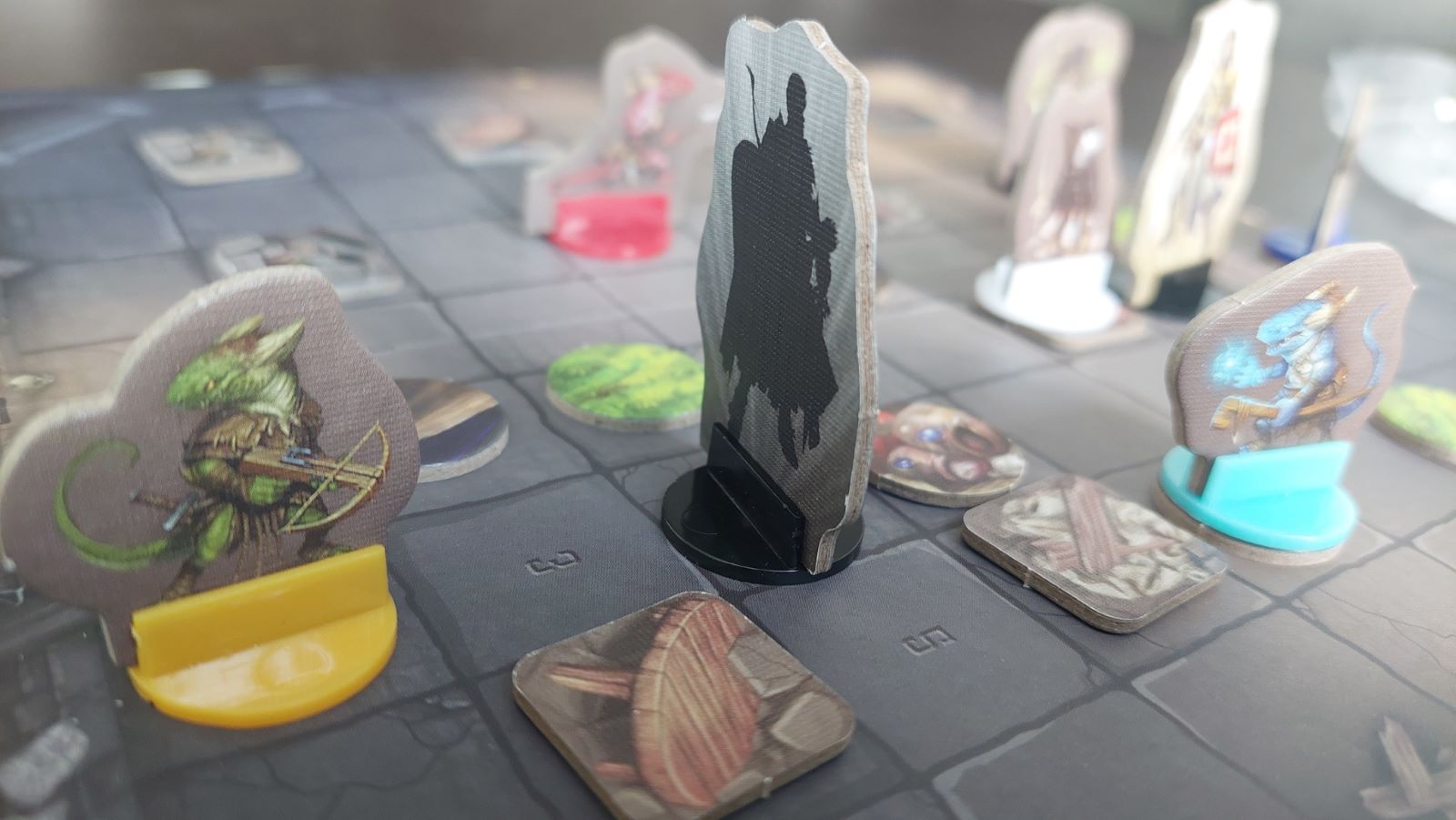 As usual, Pathfinder Level 20 is not a perfect game. One of my biggest issues is the player elimination, but, with a playtime of 30 minutes, it’s not too bad. Additionally, I wish the game came with a token or something to remind players of their kobolds color. Most everything else, thankfully, can be amended by a few simple house rules. I’m not a fan of winner takes all, so I recommend using pride tokens as points. When a kobold causes a fighter to lose a pride token, that player claims it. The final pride token counts as two points and triggers the end as usual, and the player with the most points wins! I also found Level 20 to be a bit easy. For those who want more of a challenge, I recommend starting with two rather than three ferocity tokens, and every time a kobold is slain, they return one pride token, if they have one, to the fighter(s). If that’s still too easy, reduce stating ferocity to one, and further still, increase each fighter’s movement to five.

Pathfinder Level 20 makes for a humorous half hour of beginner friendly fun. It’s simple enough for a younger audience to enjoy, yet weighty and funny enough to be enjoyed by adults or more experienced board-gamers as well. If you know someone younger and/or new to board games, who’s a fan of D&D or Pathfinder, Pathfinder Level 20 could be an excellent gift.

Ellis is a fledgling table top hobbyist with a passion for finding and sharing novel experiences. Always on the hunt for a good laugh or competition, Ellis hopes to draw deserved attention towards any conduit of positive memories, small enough to fit on a table.
Related Articles: Pathfinder: Level 20, Tabletop
Share
Tweet
Share
Submit