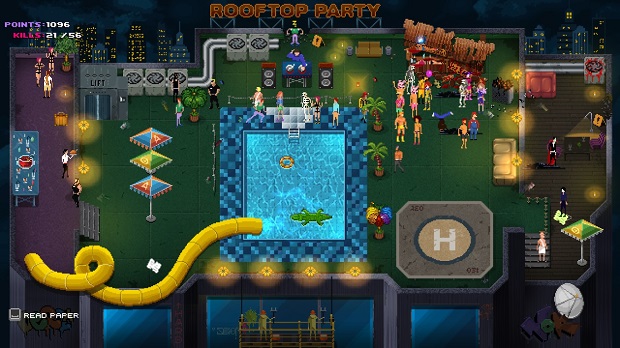 It’s nearly three o’clock in the morning, and the party next door is in full swing. Music is blaring, the punch bowl is bottomless, and costumed hooligans are milling about in the front yard. You can barely contain your anger as you don a white mask and stuff a knife in your pocket. You aren’t naturally a violent person, really. All you want is a good night’s sleep.

This is the premise of Party Hard – a killing spree prompted by exhaustion. But don’t be mistaken, this game isn’t about spraying bullets; it’s about patience and strategizing. You have to kill people when nobody’s looking, otherwise they’ll call the police and point you out as the murderer. You need some sort of plan or you’ll be busted, fast.

The police are called every time a body is found, but if the crime can be pinned on you, handcuffs will appear over your head and you’ll be arrested.

To complete each level, you have to murder – or arrange the death of – every person at the party. Stealthily stab people, rig up traps, take advantage of the unique features and circumstances of each location, and try not to get caught. The levels get progressively difficult as you move along, with greater numbers of people to kill and more open layouts. It’s much harder to sneak around at an outdoor concert than it is in a house with multiple rooms.

In between the levels, you’ll listen to the account of Inspector John West, the man assigned to the case known as the “Party Hard Killings.” At first, it may seem like only loose threads of a story, but as the game goes on, the narrative begins to come together about the killer’s travels and the inspector’s personal investment in the case. The plot is fairly interesting, though the twist at the end was predictable. The voice acting isn’t the greatest, but it serves its purpose.

Even though there’s a lot of murder in this game, the top-down style and pixel graphics make it more silly than grotesque. There are tons of whacky details you can find in each level, like Darth Vader taking a dip in the pool, and the soundtrack is easy to move to.

No one seems bothered by the fact that the ground is littered with sharks and body bags.

One unique thing about this game is that it was built for Twitch integration. That means that you can put in your stream key when you launch the game, then when you start streaming on Twitch, anyone watching can trigger game events by voting for them in the chat.

The first couple of patches for Party Hard have already been released, fixing bugs and adding new events for Twitch streamers, such as a Sharknado event on the Miami level. Alex Nichiporchik, producer of Party Hard and CEO of tinyBuild, has said he is firmly against paid DLC because it isn’t fair to the player base to make them pay if they want extra content. According to Nichiporchik, more major content updates to Party Hard – that will be totally free – are planned for the future.

While it may not have the most captivating of storylines, the game itself is fun and addictive. It’s a great way to kill some time - no pun intended - and may leave you muttering things under your breath that make others question your sanity. Plus, you can count on new content being added in the future, which will increase the game’s replayability and won’t cost you a cent.

Sarah Marchant is an office admin for a nerdy t-shirt company. She has a soft spot for indie games, a passion for story-driven titles, and a weakness for cooking games and anything with zombies.
Related Articles: Party Hard
Share
Tweet
Share
Submit