Video games allow you to enter mysterious worlds and do things you otherwise couldn’t. Sometimes unexpected things happen, whether they be good or bad. In Hob: The Definitive Edition, not long after you start your adventure, your left arm is incapacitated. A golem springs into action and saves you by amputating your arm and replacing it with his own. After a long rest you must continue exploring the world with the help of your newly acquired arm. This unfortunate incident turns out to be the key to making your adventure not only possible, but easily worth embarking on.

Hob is a 3D adventure game that consists of platforming, puzzle-solving, and combat. The game does a great job of making all three important, while not putting too much focus on any of the three. This keeps the game from getting dull, and helps switch up what you’re doing during your playtime. You may end up fighting a group of monsters before activating a switch that gives you a capsule that you must use in order to power a device which creates platforms for you to traverse. This may sound complicated, but it flows nicely while playing. 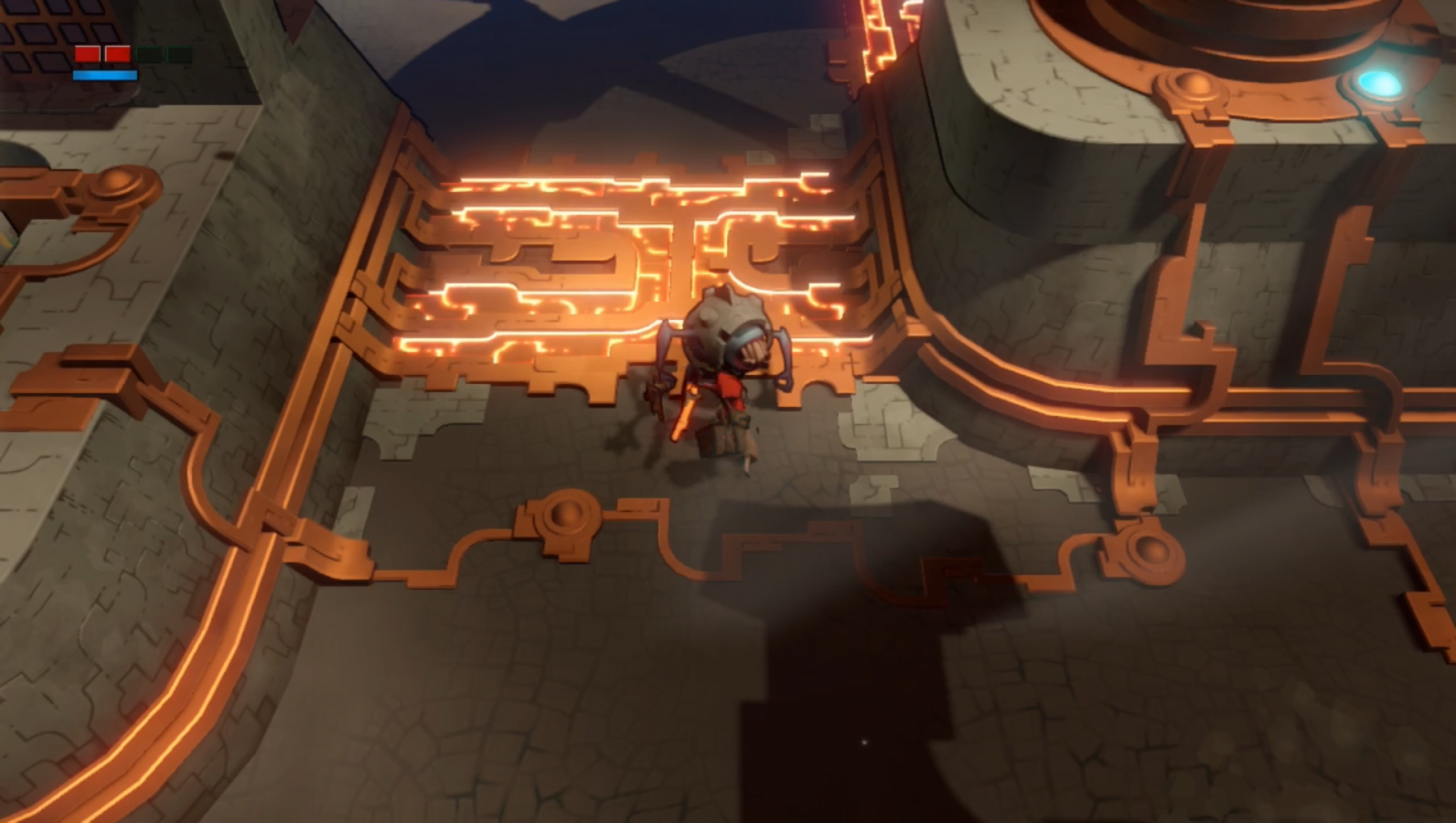 The story of Hob appears to be a mystery; the game doesn’t tell you much in terms of narrative, but the plot revolves around discovering what has been happening to the world. The various areas you explore are a combination of peaceful nature, distraught ruins, and mechanical structures. There are monsters wandering around, anxious to attack anything that gets too close to them. As you solve puzzles and make your way to new areas, you’ll start wondering what happened to cause all of this and if there’s any way to fix it.

Combat consists of sword attacks, strikes with your new golem arm, and dodge-rolling. With the help of your sword, you can slash through foes, while your golem arm allows you to perform powerful punches. You can punch quickly or perform a more powerful punch by holding down the button. This stronger punch can break an enemy’s armor or even destroy weakened walls that stand in your way. Enemies early in the game won’t take much to defeat, but as you progress, you’ll need to use the dodge-roll and fight strategically. If you don’t, you’ll receive some punishment. 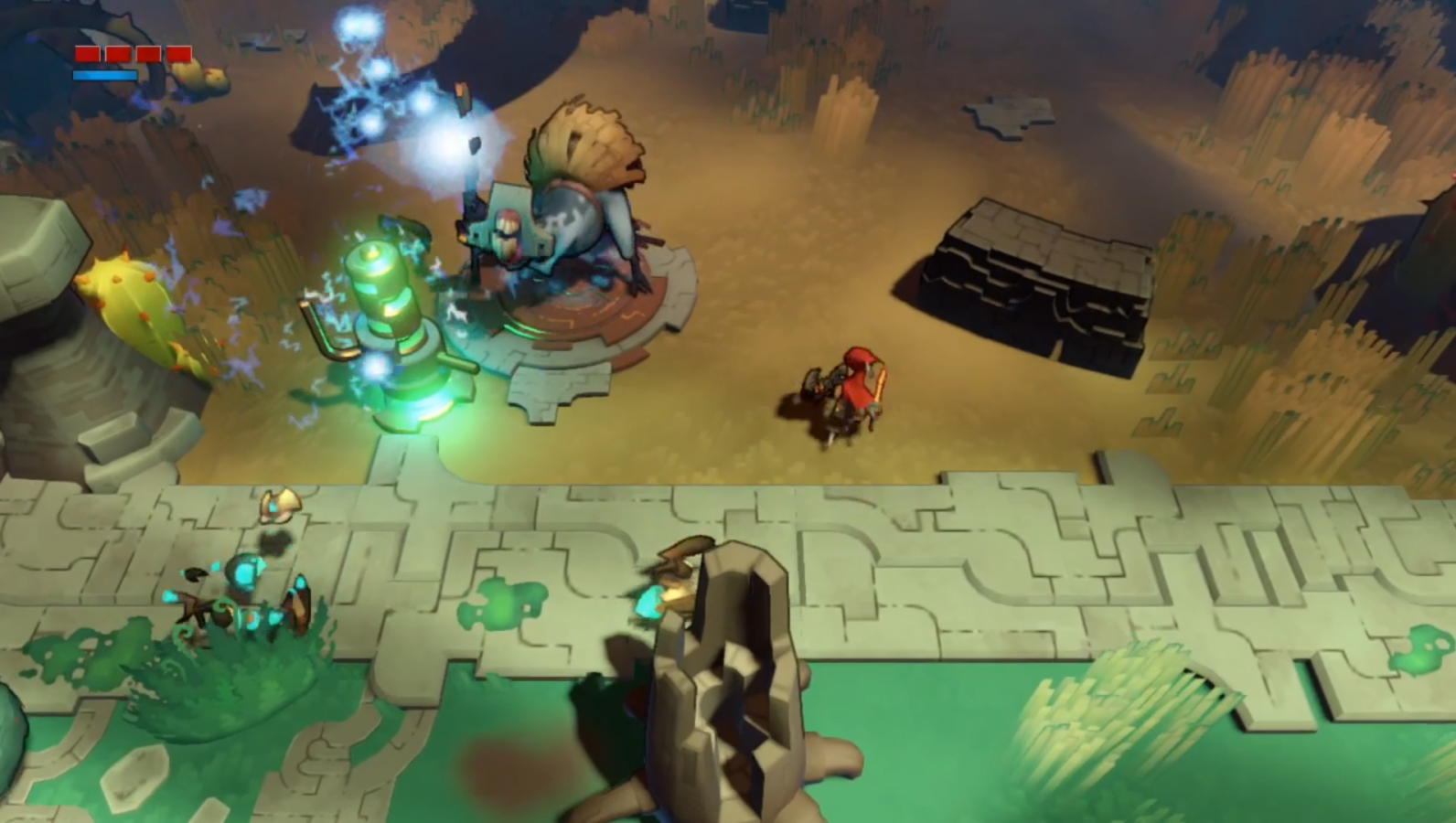 As you explore the world, you’ll obtain special emblems from containers and some enemies. These emblems can be taken to a special hideout in order to purchase upgrades. Upgrades include the ability to pull out a shield, earn new combo attacks, increase the strength of your punches, and much more. They’re worth spending the emblems on, so make sure to head back to the hideout when you’re nearby or can make it back easily. You can also change your costume if you’ve obtained any others.

The world of Hob itself is amazing both in terms of design and its dynamic changes. As mentioned earlier, there are various landscapes that you’ll be exploring and fighting your way through. Each different area has its own atmosphere, which makes discovering new areas all the more exciting. For example, when I made my way from a grassy section to a rusty, factory-like area, I immediately had a feeling of dread. At the same time, I was looking forward to seeing what it had to offer. One of my favorite things about the puzzles is how many of them alter the landscape and open up new paths. I appreciate how puzzles not only allow progression but that they change the world around you. This includes opening up shortcuts leading back to earlier areas, which is helpful as well.

Hob: The Definitive Edition has plenty of enhancements added to it since its original release. For those who played it prior, you’ll be happy to know that aspects such as the framerate, menus, map UI, and environment cues have been improved, you can check your plot progress, your character gets reset after falling into the abyss, and many other features have been adjusted. If you want to experience the game as it was originally made, there’s also a classic mode you can play. That being said, Hob: The Definitive Edition is a delightful romp through a mysterious world filled with monsters, puzzles, and intrigue. The combat is smooth, the puzzles are simple yet satisfying, and the exploration is definitely rewarding. As I played, I never wanted to put the controller down; I desired to keep pushing forward in order to discover everything that this fascinating world had to offer.

Hob: The Definitive Edition is a 3D adventure game that combines fluid combat, landscape altering puzzles, and engaging platforming. The varying area designs and atmospheres are a treat to experience and entice you into pushing forward. The enhancements since the original improve the experience as well.

Codi loves to play video games and watch movies. He will watch almost any kind of movie just to experience them. His ideas take inspiration from the shows and movies he watches, and games he plays. He also loves a good pun.
Related Articles: Hob: The Definitive Edition
Share
Tweet
Share
Submit