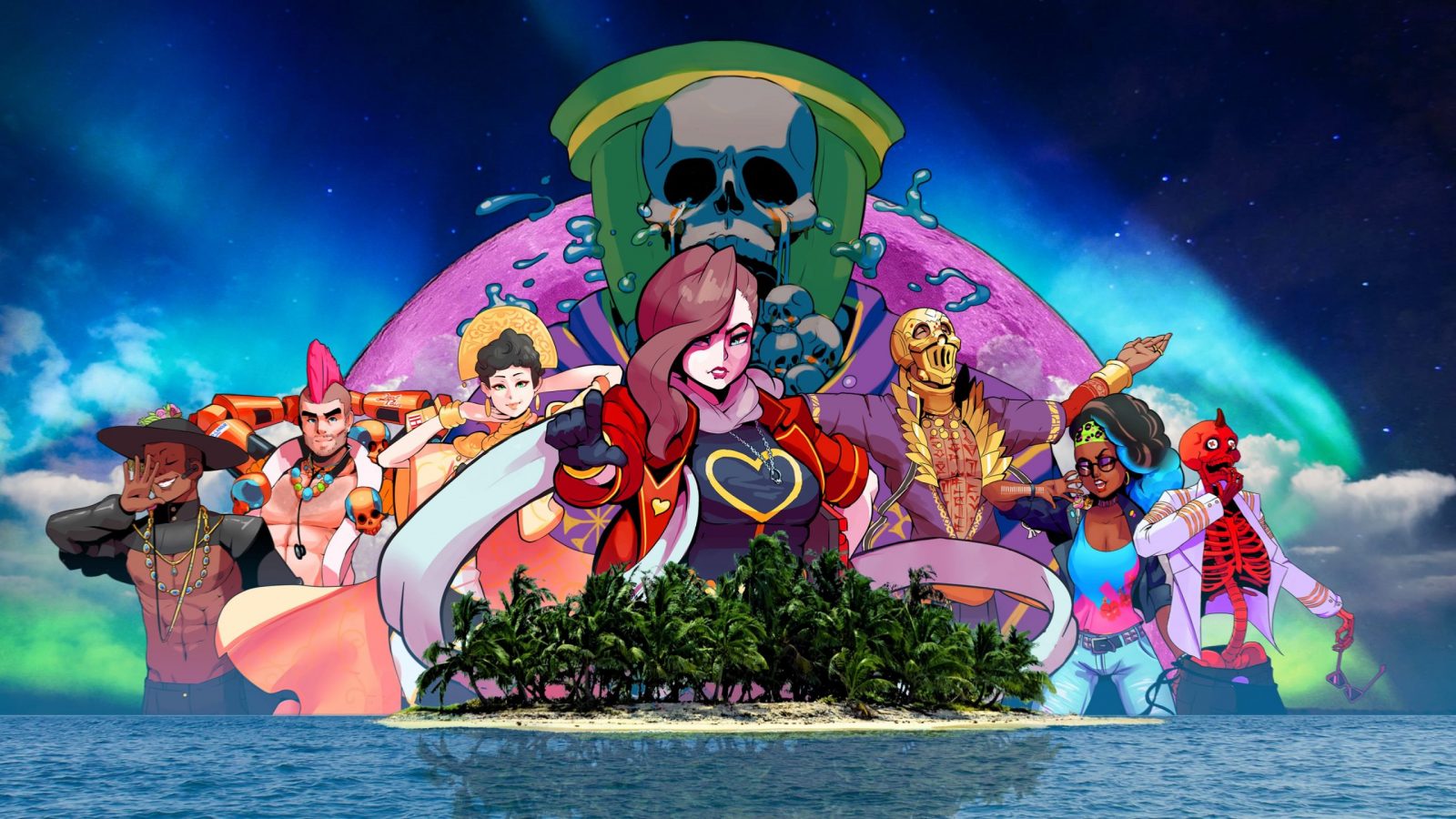 2020’s Paradise Killer was a fascinating, open ended murder mystery with no definitive answer. Once you were satisfied with the clues you found exploring the island, you could start the trial and present your case. With a cast of interesting and out-there characters, anyone could have been the killer. Despite some technical issues on Switch and an unsatisfying ending, it’s a fascinating game I haven’t stopped thinking about since I first played it. Now, two years later, the game is being released on next-gen consoles with new content, Ray Tracing, new tunes, and more. Best of all, if you already own the game, it’s a free update on Switch and PC. After three million days in exile, it’s time for Lady Love Dies to breathe life back into paradise once more.

First, a refresher. The Syndicate are a cultist group intent on rescuing and reviving gods from the furthest reaches of space. They’ve made their home in pocket realities called Island Sequences, all of which have eventually failed due to the incursion of demons – usually because of the revolts led by the kidnapped Citizens made to work on the island. After she was deceived by the god Damned Harmony, Lady Love Dies, the so-called Investigation Freak and leader of the Psycho Paradise Unit, was sent into exile in the Idle Lands. Just as Island Sequence 24 is ending, the Consel are murdered, and LD is called back to solve the mystery. You do this by exploring the island, finding clues, and interrogating suspects. Once you’ve gathered the facts, you can present your truth before Judge, execute justice, and move on to Perfect 25 with whoever’s left. It’s an incredibly fun, open ended murder mystery with multiple, equally plausible interpretations of the facts. When LD says “the Facts and the Truth are not the same,” she means it – there’s no real way to definitively tell who played what part in The Crime to End All Crimes, which makes the game much more interesting on repeat playthroughs as you find evidence you may have missed before.

I was actually surprised at how much more fun I was having, given how gosh darn good the game already was. In part this is due to the improvements of the update, and playing on more powerful hardware. While I adore the Switch, Paradise Killer just plays so much better on PS5 with more consistent performance. A higher resolution also brings out the artistry of Island 24; colors pop off the screen and you can see more details than on Switch. Along with a new HUDless mode, the PS5 version includes Ray Tracing which somehow goes perfectly with the Vaporwave aesthetic. Being able to see the 2D character models reflected in the environment is really neat, I only wish you could see Lady Love Dies’ reflection too.

Aside from a sweet visual upgrade, there are new secrets to find and new things to do. I don’t want to spoil the finer points of these encounters, but some characters having to do with Dead Nebula’s vending machines will give you new songs to listen to either through the island’s speakers or your computer Starlight. The soundtrack was already chock full of bangers (I listen to it constantly on my phone), and these new tracks are some of the best of the bunch. There’s also a fish who gives you more side quests, but I’ll leave that for you to find. Rest assured, there are a ton more secrets to find whether you’ve solved this mystery before or are diving in for the first time. 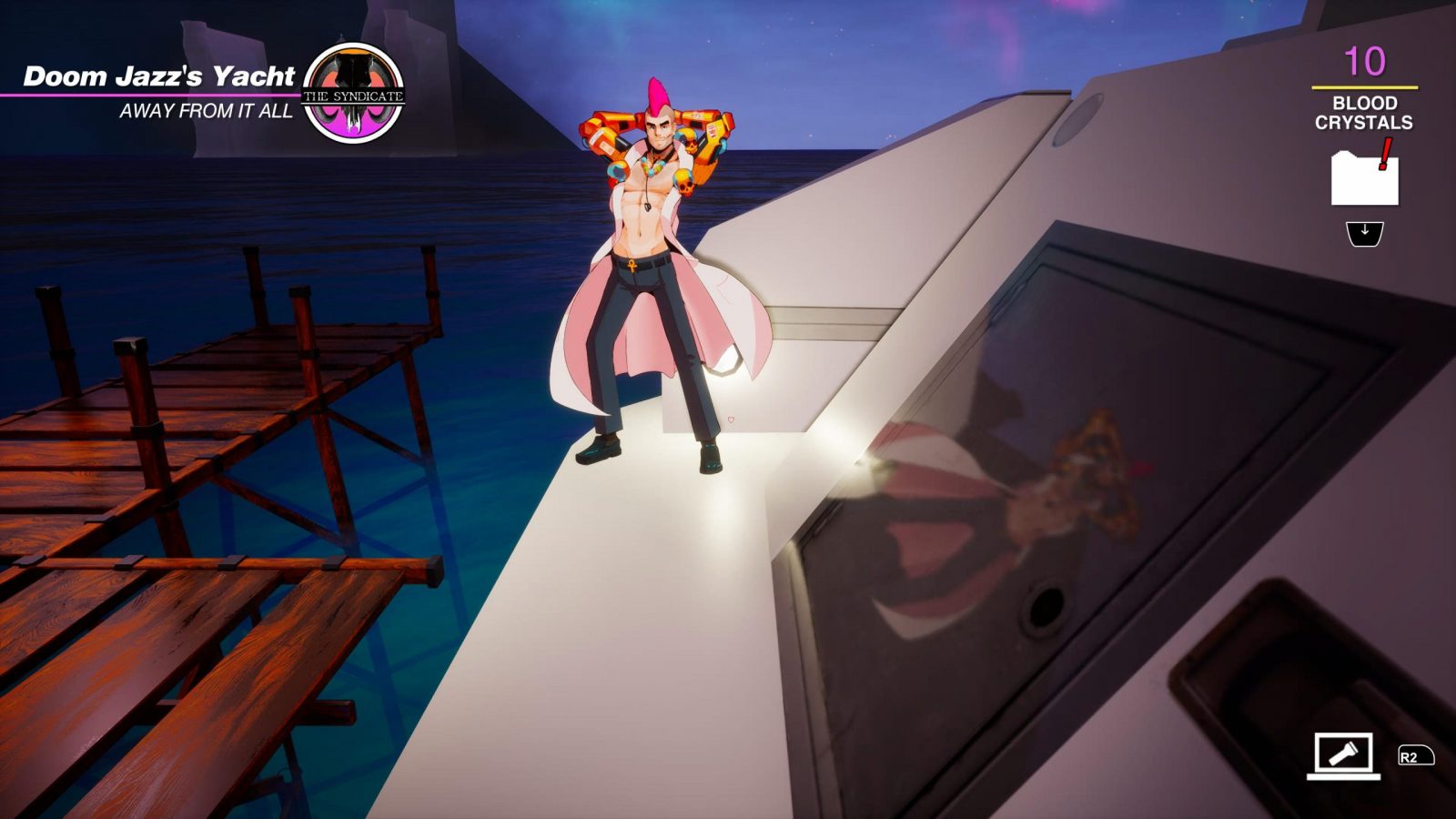 Paradise Killer also has my favorite use of the DualSense controller yet, rivaling titles with a much bigger budget like Ratchet and Clank. The trigger effect when turning on your flashlight feels exactly like the real thing: with just a bit of resistance and a satisfying click. On the other hand (literally) activating Starlight’s AR navigation mode with L2 has some really nice resistance to it that doesn’t make it harder to press in, but makes the act of pulling the trigger a bit slower. What was most useful and fun was actually the use of the speaker. Normally, when collectables are nearby you can hear a faint static noise. This now emanates from the speaker making it a lot easier to parse from the ambient noise and rocking music. When finishing a conversation with Shinji, your wacky Demon pal who appears in dozens of locations, as his laugh fades out the sound sort of moves from your TV into the controller. It’s a really neat effect that never gets old.

Paradise Killer is now the perfect murder mystery. With some visual and performance issues taken care of and the addition of new secrets to uncover as well as some gorgeous Ray Tracing, there’s never been a better time to breathe life back into paradise.

David is the kind of person to wear his heart on his sleeve. He can find positives in anything, like this is a person who loved Star Fox Zero to death. You’ll see him playing all kinds of games: AAAs, Indies, game jam games, games of all genres, and writing about them! Here. On this website. When not writing or playing games, you can find David making music, games, or enjoying a good book. David’s favorite games include NieR: Automata, Mother 3, and Gravity Rush.
Related Articles: Indies, Paradise Killer
Share
Tweet
Share
Submit